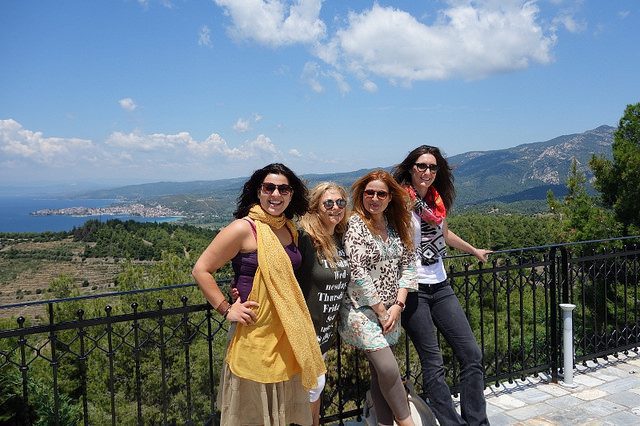 23 Dec The Ladies of Porto Carras

Porto Carras is the largest unified vineyard in Greece and one of the largest in Europe. It is a certified organic terraced vineyard, with vines as old as 40-50 years.

And impressively, it is a domain run by women. Porto Carras was started in 1973 by Yiannis Carras, a shipper who built the entire property, including two hotels, a marina and vineyards. In 1982, Porto Carras received PDO (protected domination of origin) status. Then, in 1992, Carras declared bankruptcy and the bank took control. Luckily during this six-year period, an enologist stayed on to take care of the vineyards and wine production.

In 1999, the Stengou family bought the property in an auction. With a background in construction and tourism, they started a large renovation of the property in 2000 and spent more than six years recultivating the vines. From the patriarch of the Stengou family to the children, there are 10 engineers in total, including daughter Yliani Stengou who manages the winery side of the business. Her father, brother and one sister run the hotels and resort.

Yliana was working as a civil engineer when her family purchased the property. She had been living in fields, outside cities and traveling and working in a very male-dominated industry. But deep down, she always knew that she wanted to be a farmer. Yliana was the first member of her family to leave engineering.

The first 10 years running the winery, she explained “were hard. It was a fight and a battle, as bad as any. I went from one ‘man’s world’ to another, and many people assumed that my daddy gave me the winery as a present.”

But Porto Carras Winery was not a “gift from daddy.” She had to convince her father, as well, that wine was her passion. Yliana began studying wine in 2001. Her previous experience had taught her how to manage people but she had to learn everything she could about the wine industry. She took the WSET course, studying under the only Master of Wine in Greece.

Read the complete story in the Napa Valley Register.

This post originally appeared on FoodableTV.com In the 1920s and 1930s, the Broadway Theater District in Downtown Los Angeles was…

This post originally appeared on FoodableTV.com In the 1920s and 1930s, the Broadway Theater District in Downtown Los Angeles was…