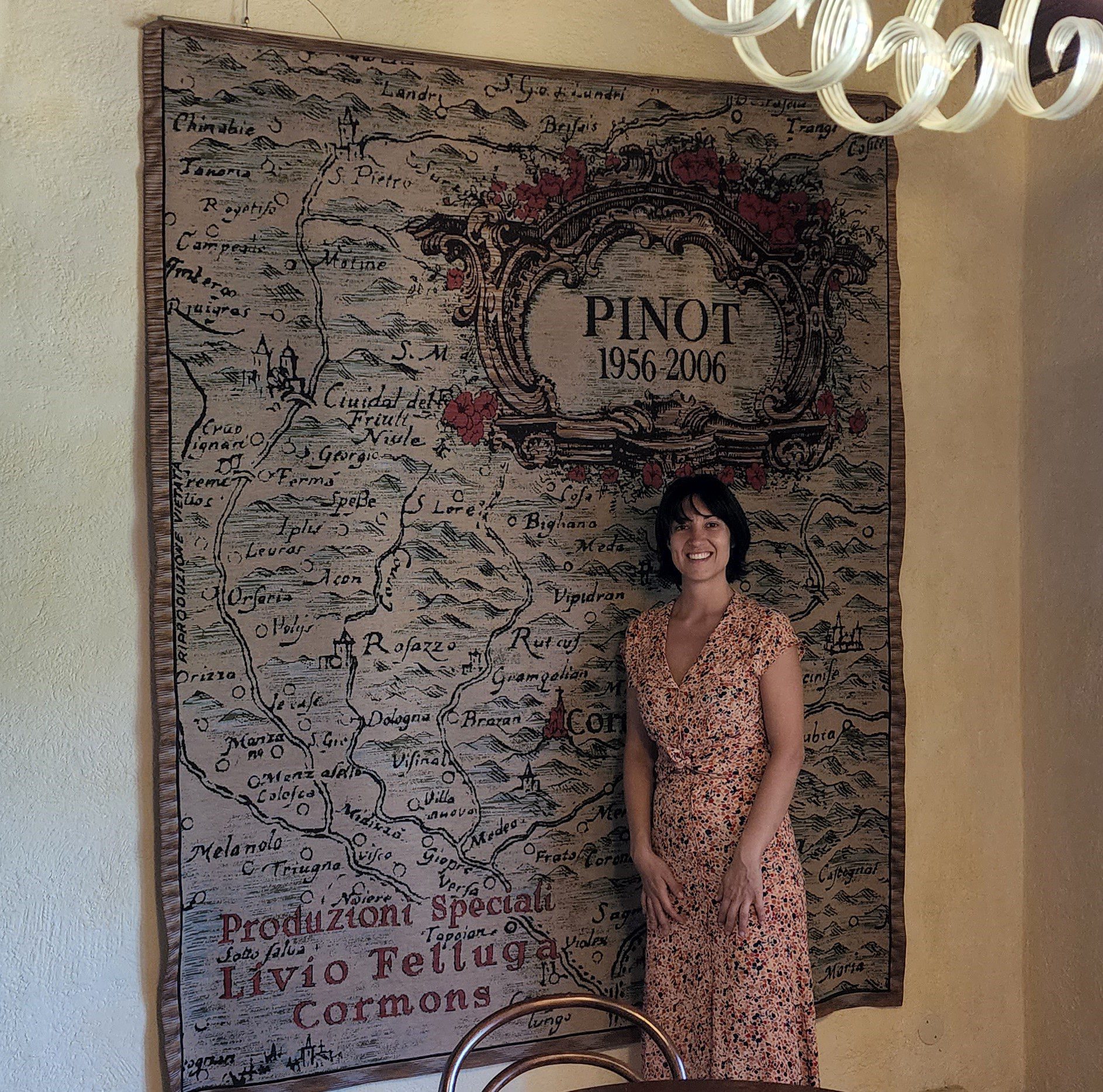 A few months ago I met Laura Felluga when she was visiting Los Angeles. As the keeper of the legacy at Livio Felluga Wines, I enjoyed lunch with Laura as she shared her grandfather’s story of creating Livio Felluga wines in the 1950s. This past week, I visited Laura in her home town of Cormòns, a comune in the Italian region Friuli-Venezia Giulia. When we had first met, she spoke about how her grandfather Livio Felluga found land in the area of Rosazzo in Colli Orientali in Friuli that had the same Ponca soils from his birth home in Istria. Laura took me to Rosazzo and to the Abbazia di Rosazzo (Rosazzo Abbey) that sits on a hill overlooking Colli Orientali del Friuli. Actually visiting the land that she so aptly described when we first met was the Please The Palate pick of the week, as was tasting the new single vineyard wines sourced from these hills.

The Rosazzo Abbey, built around the year one thousand, is located on the eastern hills of Friuli, about twenty kilometers from Udine and ten from the border with Slovenia. From the top of the hill, one can look out at the historic vineyards that surround the abbey.

These are some of the vineyards managed by the Felluga family. The grapes from these vineyards go into the Livio Felluga Abbazia di Rosazzo and Terre Alte wines. The Abbazia di Rosazzo wine is predominantly Friulano with Sauvignon Blanc, Pinot Bianco, and small amounts of Ribolla Gialla and Malvasia sourced from the best vineyards surrounding the abbey. The Terre Alte wine, which  means “highlands”, is predominantly Friulano with Sauvignon Blanc and Pinot Bianco sourced from the oldest vineyards in Rosazzo and vinified in oak (old and neutral).

The Rosazzo Abbey is still a working church but connected to it is a centuries old building that is a private tasting room for Livio Felluga wines. They are still renovating the building and will be adding a cellar for the Abbazia di Rosazzo and Terre Alte wines. Laura brought me to this space to introduce me to three single vineyard, single varietal wines.

The single vineyards are found in the hills of Rosazzo. 300 blocks were picked and vinified separately and in 2018, Pinot Grigio, Friulano, Sauvignon Blanc, and Pignolo were bottled separately. Now the 2019 vintage has been released and we tasted the three white wines.

The 2019 Friulano Sigar has aromas of stone fruits, herbal notes, and cool wet stone. On the palate, the wine has full mouth acidity but the smoothness of satin sheets.

The 2019 Pinot Grigio Curubella has fruit aromas of peaches and apples but also savory notes of sage. This wine is more viscous and has more body but there is a beautiful minerality on the palate and a mouthwatering finish.

The 2019 Sauvignon Blanc Potentilla starts smelling like a wild field of flowers and herbs and then shifts to the smell of thyme, oregano, and rosemary cooking in the kitchen and has a lovely tart, chalky acidity.

It was a wonderful treat to spend time with Laura Felluga in her home town and to taste the wines while in the vineyards from where they came from.

It's hard to believe that summer is here already...but it is! And that means it is time to celebrate another…

Tempranillo may be the king of Spain, but Verdejo is the queen. Spain's most popular white grape, Verdejo is grown…

Verdejo: The White Wine from Spain’s Rueda - Crush On This Episode 103

Spain’s most popular white grape is Verdejo. And while popular across the country, Verdejo is native to the region of…