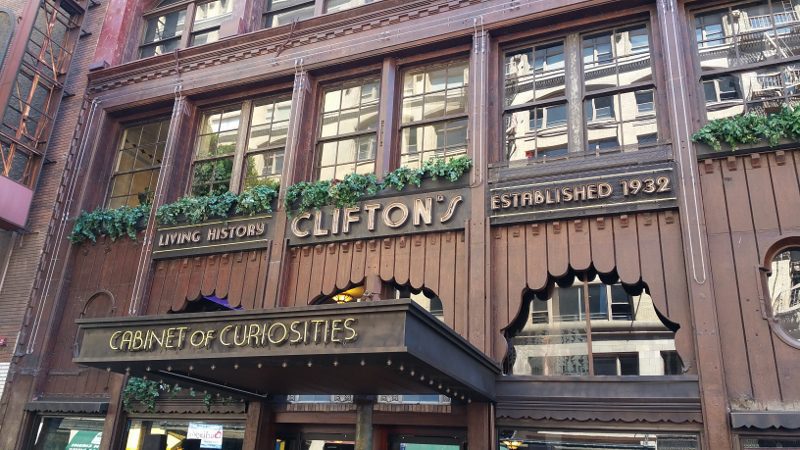 After 80 years, Clifton’s Cafeteria in downtown Los Angeles shut it’s doors in 2011. But today the doors are reopened, bringing glamour back to downtown LA.

As a third generation Los Angeleno, Clifton’s had been a destination for my grandparents, my parents and myself. As a little girl, my mom would take me to Clifton’s where after lunch I could pick a toy out of the treasure chest. While I have vague memories of this, Clifton’s Cafeteria was a part of my childhood.

Even Edmond Clinton, grandson of Clifford Clinton, was there to mark this historic day.

What was once the largest public cafeteria in the world with over 600 seats on three floors, the 47,000-square-foot space is now four floors with five bars, a cafeteria and soon a steakhouse as well. There is a magnificent 40-foot tree that reaches three floors in the center of the atrium.

There is so much to explore at Clifton’s Cafeteria! The cafeteria on the ground floor offers everything you would image from a cafeteria – pizza, chili, salads, meats and of course jello! While Clifton’s did not serve alcohol for 80 years, there are now five bars inside. Each bar is independently run and has a different theme with Damian Windsor as Director of Spirits. The Monarch Bar, overseen by Chris Amirault, is the main bar, featuring California spirits and beer and offering drinks with familiar flavors in unique packaging. There is also a soda fountain where guests can enjoy alcoholic and non-alcoholic phosphate sodas and ice cream sundaes. The Monarch Bar will be open and serving drinks as long as Clifton’s is open and it is legal, most likely 6am – 2am daily.

Gothic Bar, overseen by Dustin Newsome, will be the high volume nightclub upstairs from the Monarch Bar and serving punch bowls in unique styles and vessels. Shadow Box, overseen by Aaron Polsky, will be a high end concept that challenges all the senses – taste, visual and aromatic. Treetops on the fourth floor will be spirit focused with rare and interesting finds. The Tiki Bar, also on the fourth floor, will honor the Pacific Seas with a Polynesian theme.

Clifton’s Cafeteria officially re-opens its doors on September 21, 2015. I can’t wait to return and experience everything it has to offer!

This post originally appeared on FoodableTV.com Every five years, a world exposition takes place somewhere around the world. This year,…

Grenache Day: A toast to the unsung hero of the wine industry -- and one of its biggest fans

Sept. 18 marks Grenache Day. It is a day to honor the unsung hero of the wine industry: grenache. The…

Grenache Day: A toast to the unsung hero of the wine industry -- and one of its biggest fans

Sept. 18 marks Grenache Day. It is a day to honor the unsung hero of the wine industry: grenache. The…