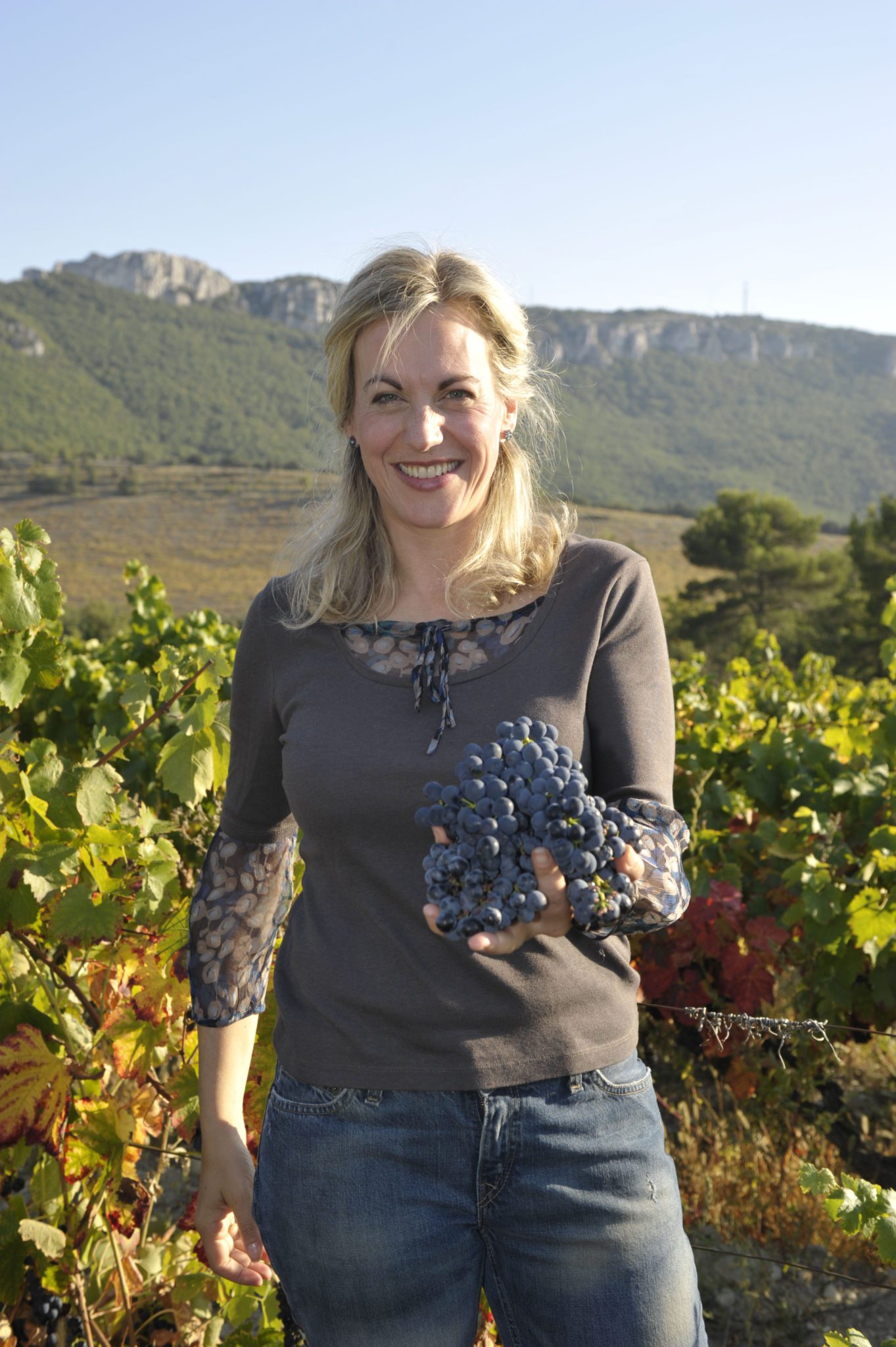 18 Sep Grenache Day: A toast to the unsung hero of the wine industry — and one of its biggest fans

Sept. 18 marks Grenache Day. It is a day to honor the unsung hero of the wine industry: grenache.

The question has been: Why isn’t grenache, as well as the other Rhone varietals, better known? According to Nicole Sierra-Rolet of Chêne Bleu Winery and one of the founders of Grenache Day, “Grenache has to have a place in the Olympics of grapes and deserves to be loved as it is velvety and luxurious.” Grenache Day is spearheading the movement to put grenache on the map. Sierra-Rolet, born to an American mother and a French/Italian father, was raised in New York and Milan. She worked in think tanks and investment banks in the U.S. and in Europe when she met her husband Xavier Rolet in 1994. When they met, Xavier had just purchased some property, which included a medieval priory and a fig tree, in Southern Rhone. Nicole and Xavier married in 1997 and spent 12 years renovating the property.

With a lifelong love of learning, Sierra-Rolet delved into the history of the property. She shifted from international relations, public policy and finance to wine and has never looked back.

“Winemaking is multi-dimensional; it combines science, history and geology,” she said. “I have always wanted to learn and I love connecting the dots. Life is fun when you have the excuse to drill deep into stuff.”

Sierra-Rolet puts all of her passion into Chêne Bleu as she explained, “This is my life and all I think about. My family allows me to dedicate myself wholeheartedly.”

And, her family is also dedicated to the project as they share the motto “not mine, not yours but ours.”

In addition to Xavier (proprietor and master beekeeper) and Nicole (principal and senior plate spinner), there are two other important people on the team: Xavier’s sister, Benedicte Gallucci (viticulturist and Mrs. Fix It), and her husband, Jean-Louis Gallucci (winemaker, cellar master and chief problem solver). Together, they believe in a value system in which you make a place greater than the sum of its parts.

And they have many parts. The business model they have created is the opposite of what they teach in business school. Instead of starting small, they started by establishing four independent, yet related businesses: the winery, hospitality, wine education and the Grenache Association.

Chêne Bleu is located with one foot in the northern Rhone and one foot in the southern Rhone. Located in the mountains at an altitude of 1,800-2,000 feet above sea level, it benefits from the southern Rhone climate and the northern Rhone-style soils. Based on the location, it sits at the crossroads of four appellations: Gigondas, Cotes du Ventoux, Cotes du Rhone and Sequret. However Nicole and Xavier chose not to be a part of the AOC system. Rather they are sort of mavericks. They are off the beaten path and do not want to be limited by specific rules. The goal is to make a wine that best expresses a sense of place.

Chêne Bleu’s twin flagship wines, both grenache and syrah-based wines, are named after Abèlard and Hèloïse, the most famous pair of lovers in the Middle Ages. Abèlard and Hèloïse are both made with the same attention to detail and are equal in quality but different in style. According to the website, “Abèlard, the grenache blend, is well bred but packs a full-bodied punch. Hèloïse, the syrah blend, shows balance and elegance through restraint.”

The winery is located on 450 acres of private forest, and there are currently 35 hectares (87 acres) planted to Rhone varietals: grenache, syrah, grenache blanc, viognier, marsanne, roussanne, mouvedre. They practice biodynamic viticulture and are working toward certification.

The ancient priory has been meticulously restored, and is called La Verrière. Accommodations include seven guest bedrooms and suites for up to 18 guests. Le Verrière also includes a Michelin star chef, a helicopter landing, a professional kitchen and an outdoor kitchen, as well as a pool. But, it is not a hotel. La Verrière is available for private weekly rentals and events between June 1 and Sept. 15 and is occasionally available as a bed-and- breakfast.

Borne out of frustration while trying to learn about wine as quickly as possible, Sierra-Rolet has created a wine education program at La Verrière that is offered each June for 10-12 people. The idea is to teach people to be independent wine thinkers. The program is based on WSET (Wine and Spirits Education Trust) but includes experiential learning. Guests spend five days learning about the main wine regions and the main varietals but also spend time in the vineyard and winery learning what makes great wine.

This is the ultimate course for those serious about learning about wine but have limited time.

Grenache, a red grape, is widely planted around the world, but it is typically used in blends and therefore overlooked. Sierra-Rolet and others passionate about grenache wanted to change that and so they created the nonprofit Grenache Symposium Association.

Having been a director of programs in think tanks, Sierra-Rolet understands how to put the right people and ideas together, so in 2010, she structured a symposium that was an industry powwow with 273 producers from 23 countries. The association also created Grenache Day, which takes place on the third Friday of every September. Around the world, in retail stores, restaurants and homes, people celebrate the grape.

Sierra-Rolet oversees four amazing projects and when they converge, the whole is greater than the sum of its parts. The adventure is just beginning and they are still growing. And what she loves the most about the wine industry is that “in wine you can add your own chapter or own little verse to the story.”

And that is what Sierra-Rolet is doing.

After 80 years, Clifton's Cafeteria in downtown Los Angeles shut it's doors in 2011. But today the doors are reopened,…

Harvest 2015 is well underway in most wine regions in the Northern Hemisphere. The grapes are being picked and made…

In the vast city of Los Angeles, there is an ever growing list of restaurants that I want to try.…