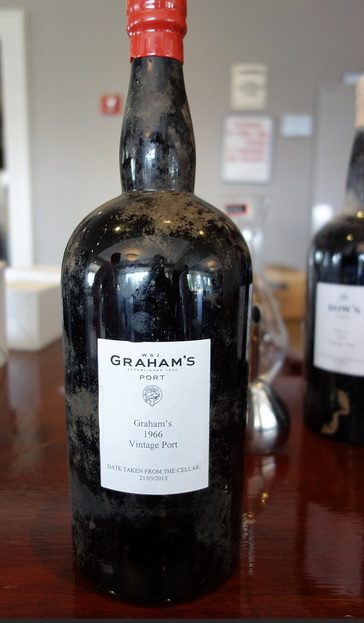 Often Port is seen as a drink for older British men sitting in high-back leather chairs with a cigar in hand. But, Port is a fortified wine that comes in a vast range of styles (and prices), making it something that we all can enjoy.

Port is produced in the Duoro Valley in Northern Portugal. Port, whose name comes from the city of Oporto, can only be produced in Portugal, just like “Champagne” can only be from Champagne, France. But, anything produced outside of the Duoro Valley is considered a “port-style” wine. Port has been produced for centuries; it is the third oldest wine area in the world and is one of the first specifically designated geographic wine producing regions.

The names of the Port Houses come from families of European decent, predominantly English. These families came to Portugal as merchants, exporting textiles and other products back to England beginning in the late 1600s. They were introduced to the wines of the region and began importing them as well, making the UK a major Port market. The German Kokpe family was the first house founded in 1638, followed by the Warre family, the first English family, in 1670. More European families opened their Port companies between the 1600s and 1800s and still exist today: Taylor Fladgate in 1692, Croft in 1678, Sandeman in 1790, Dow in 1798, Quinta do Noval in 1813, Cockburn in 1815, Grahamn in 1820, Fonseca in 1822. Port Groups who own one or more Port Houses also formed. Two of the biggest groups are Taylor, Fladgate & Fonseca, started in 1838, and the Symington Family, started in the 1880s and today run by five members who are 13th generation in the Symington family.

There are more than 80 different grapes (red and white) that can be used in port production, however, the five key grapes most commonly used are: Touriga Nacional, Touriga Franca, Tinta Roriz, Tinta Barroca and Tinta Cão.

Port starts out like all wine. The grapes are picked and then crushed. While today most of the crushing is done by machine, some of the best ports are still crushed by foot, which can gently crush the skin without crushing the seed. The grapes are left in the tank (either stone tanks (lagar) or stainless steel tanks) for 1-4 days to ferment. When fermentation is half way through and approximately half of the sugar has converted to alcohol, a neutral grain spirit (ie. Brandy) is added to stop fermentation. The result is that the alcohol content increases to 19-21% ABV (alcohol by volume) while residual sugar remains as well. The Port is then transferred to large stainless steel or wooden casks and aged according to the final style of Port desired.

Ruby Port is the simplest style. Named for its ruby color, it is a blend of several vintages and generally ages for 3 years. The style is fruit forward and is meant to be drunk young and fresh. Ruby Ports are affordable and easy to find and once opened, they will last 3-4 weeks.

Like Ruby Port, Reserve Port is fruit forward. It is a blend of vintages, averaging 5-7 years and spends more time in cask, resulting in a more structured wine.

Known as SQVPs, this style of Port uses grapes from one estate (quinta) and comes from a single vintage. SVQPs can produce a vintage any year and tend to be less expensive than Vintage Ports. These Ports can be aged 4-5 years before drinking.

2011 vintage was recently declared, making it the first declared Vintage Port for this decade. Previous declared vintages are 2007, 2003, 2000, 1997 and 1994. It is believed that the 2011 vintage is the best one in the last twenty years resulting in beautifully balanced, elegant wines with great acidity. While the 2011 Vintage Port will cost anywhere from $100 and higher, they have great aging potential and are just starting to appear at your local retailer. Tawny Port is Ruby Port that spends time in large oak casks to soften the flavors. While aging, oxygen gets into the casks. As a result, the Port oxidizes and the color changes to a “tawny” (reddish-orange) color. Slightly sweeter in taste, Tawny ports have notes of nuttiness, caramelized figs, dates and prunes. Tawny Ports are ready to drink when purchased and once open, Tawny Ports can last up to a month.

There are three styles of Tawny Ports:

Colheita, pronounced Col-yate-a, means “harvest”. Colheitas are Tawny Ports made from grapes from the same vintage and are aged in small used oak barrels.

Crusted Port is an unfiltered tawny that needs to be decanted due to the sediment, or “crust”, that forms.

Aged Tawny Ports are 10 years old, 20 years old, 30 years old or over 40 years old. These ports are blends of many years. Each producer has a “house style” (like Non-Vintage Champagne), so that no matter when you open a bottle, you will have the same flavor profile.

There is so much to explore when it comes to Port. From the styles to the Port Houses, it is a vast category that can overwhelm at times.  Best suggestion is to start with a simple Ruby Port and a piece of dark chocolate. Then, try a Tawny Port with some nuts, dried fruits and cheeses. Once you understand the differences of these two styles, the intricacies within each category will be much more approachable.

Women Winemakers: Taking The Lead In The French Wine Production

Although wine making dates back 8,000 years, over the centuries, progress has been made in grape growing, vineyard management and…

Known for its unique moon-like landscape, underground cities, cave churches and houses carved in the rocks, 48 hours in Cappadocia…

Ten Turkish Dishes You Should Know

We don’t see a lot of Turkish food here in the U.S. but on a recent trip to Turkey, we…