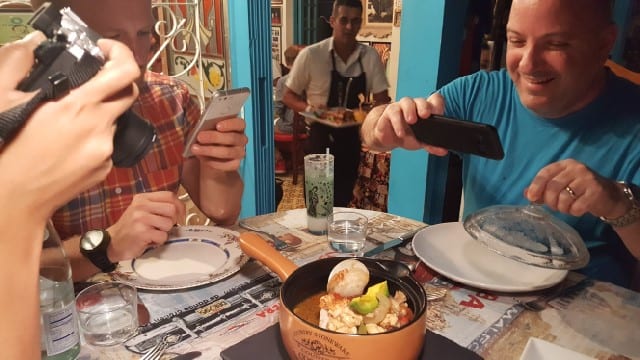 04 Jul When foodies travel: A culinary exploration of Cuba

My favorite way to explore a culture is through the cuisine. It is one of the most interesting, and filling, ways to understand a culture’s history as well as its role today. Cuba is no exception. A country that seemed blocked off from the world, at least the US, for decades, Cuba has a fascinating culinary history. And, despite the new restrictions on traveling to Cuba, a culinary tour with Access Culinary Trips is still permitted! Here is a a recap of my culinary trip to Cuba, which I originally wrote about in the Napa Valley Register. 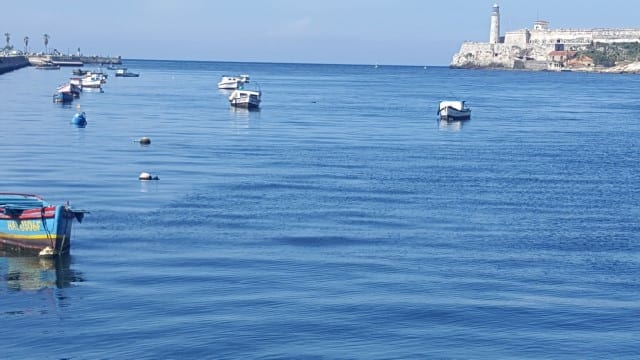 Despite new restrictions for Americans traveling to Cuba, it is still a top destination for tourists. And rightfully so. The largest country in the Caribbean, Cuba is a semitropical island with a coastline marked by bays, reefs, keys and islets as well as long stretches of lowlands and swamp. Half of the island is mountainous with the Sierra Masetra mountains to the east, the Trinidad mountains in the center and the Sierra de los Organos in the west.

When I was growing up in the 1970s and 1980s, Cuba was always off limits to me, somewhere I never thought I would be able to visit. But when restrictions were lifted in 2016, Cuba moved to the top of my list. I did not act on booking a trip right away, but as new restrictions came into place, I decided I could wait no longer. The good news is that is Cuba is still open to Americans and is a place worth visiting. 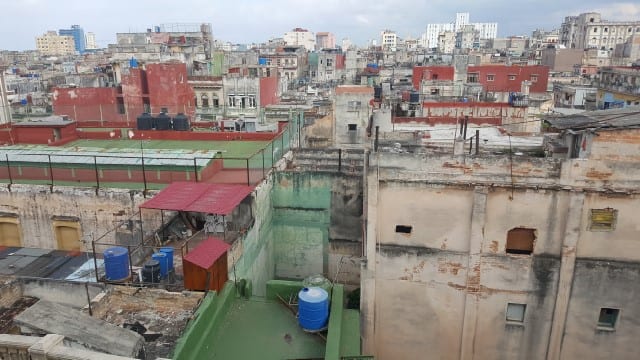 To travel to Cuba, it remains legal to go on a small group or private tour under the category of Support for the Cuban People. The small-group culinary tours with Access Culinary Trips operate under this category and they are one of the few remaining tour companies licensed to operate in Cuba. 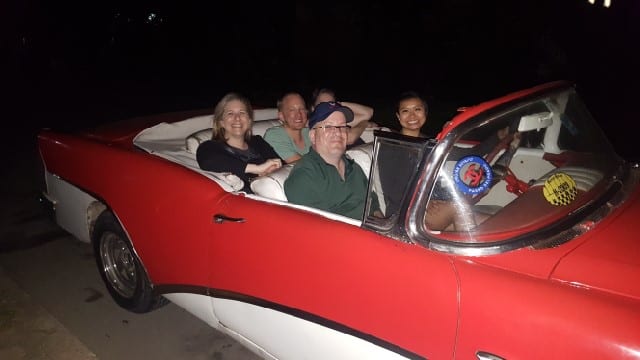 When thinking about Cuban cuisine, I was curious as to what we would find. It seemed that it might be an oxymoron to go on a culinary trip to Cuba. After all, as a communist country that suffered from trade restrictions, there were constant food shortages and economic hardship, which led to poor food conditions. According to the World Bank, about 19 percent of the population of Cuba is classified as undernourished and the population still lives on rations.

But Cuban cuisine is nonetheless interesting to learn about. Cuba was once at the center of Caribbean trade routes, and the food is a reflection of the many cultures that once came through its ports. 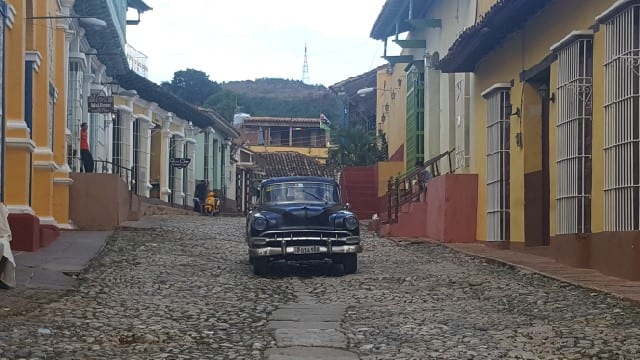 My eight-day journey in Cuba included many typical activities, such as a walking tour of Old Havana, climbing to the top of Plaza de Catedral for views, visiting the street art gallery of muralist and painter Salvador Gonzales and a salsa class.

We went to the famous Fuster Gallery, where we saw José Fuster’s colorful mosaic sculptures. We went to the Museum of the City and Plaza de Armas, Revolution Square and the Plaza Vieja, which dates to 1559. We saw a traditional touristy show at the Tropicana that took us back to 1940s Havana and listened to the Buena Vista Social Club show at the Hotel Nacional.

On our last night in Havana, we found our way to the Fabrica de Arte Cubano, an art gallery and club established inside a former cooking oil factory and today is one of Havana’s premier nightclubs and art galleries. We also drove south to Trinidad, a small colonial town on the southern coast of Cuba and swam in the Gulf of Mexico. All of these activities are part of most trips to Cuba but what really stood out were the culinary experiences. 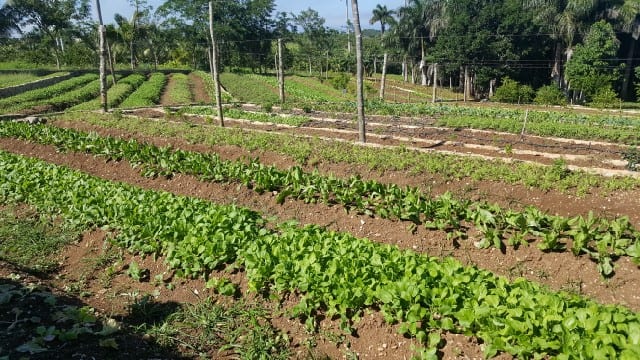 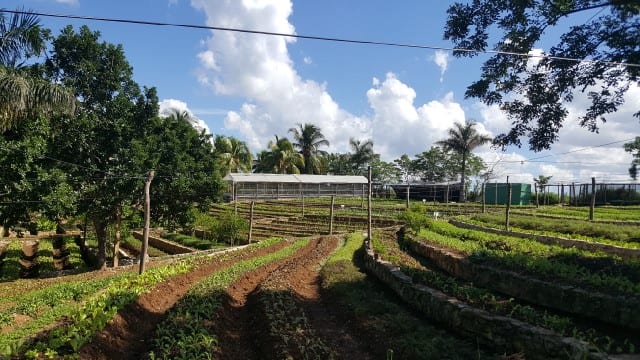 An organic farm located 40 minutes outside of Havana, Finca Marta is owned by Fernando Funes-Monzote, a young entrepreneurial agricultural engineer, and his wife Claudia. 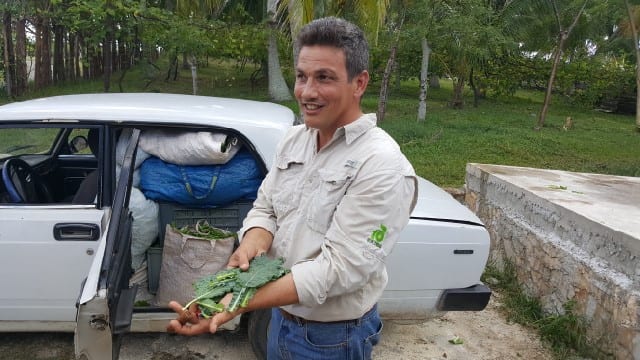 They found the abandoned property with an old house a little over six years ago. Originally it had been managed by a former policeman who grew sugar cane and raised cattle. His son moved to the city and left the property after his father died. Funes-Monzote, who had studied ecological agriculture, grew up on a research station where his parents were animal scientists.

After getting his Masters of Science in Spain and his PhD in Holland, Funes-Monzote bought this property and moved his family there to practice what he had studied. He named the property in his mother, Marta. A rustic property with rock soils and a thin topsoil, it had no tap water, and they spent seven months digging a well by hand. 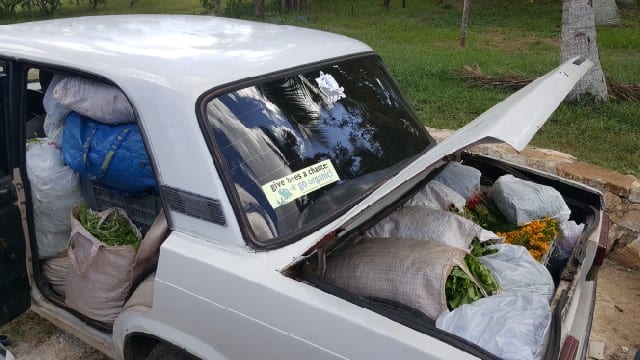 His colleagues thought he was crazy, but he has proven that it is possible to create a sustainable life. Finca Marta grows 60 different vegetables throughout the year. They also produce cheese, honey from a bee farm, milk and meat. They have a contract with the government for a portion of their products but also sell wholesale direct to restaurants. They produce five times what they can transport and we watched them pack a small car full to the tilt with fresh vegetables to take to the city before we sat down for a deliciously fresh lunch. 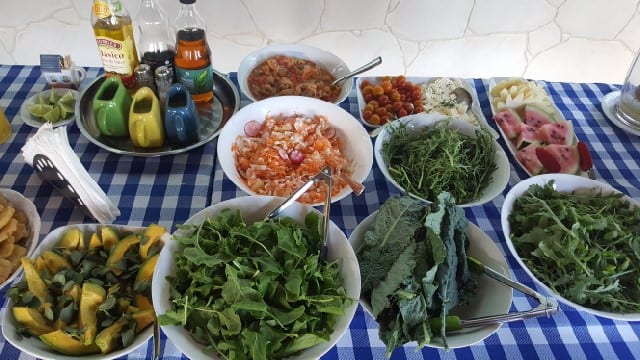 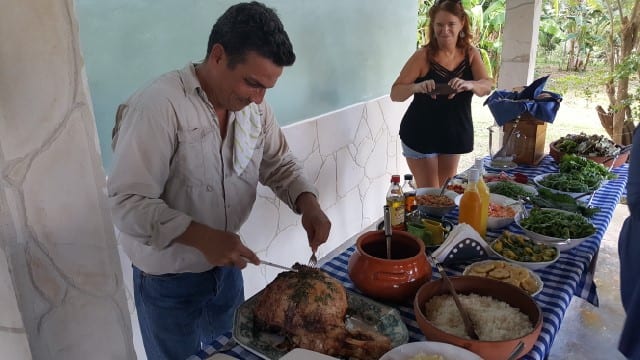 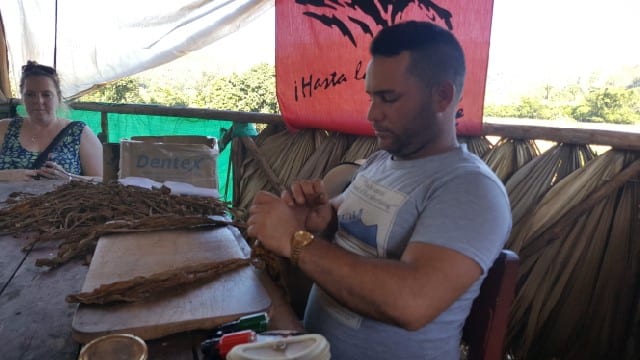 Surrounded by limestone karsts, the lush, green, and peaceful Viñales Valley is a UNESCO World Heritage Site and home to some of the finest tobacco farms in the world. We visited an organic tobacco farm where we learned that only 10 percent of the tobacco farms in Cuba are all natural, using no chemicals. We learned the difference between Cohiba, Romeo & Juliet and Montecristo cigars, the rolled our own cigars and smoked one dipped in honey. 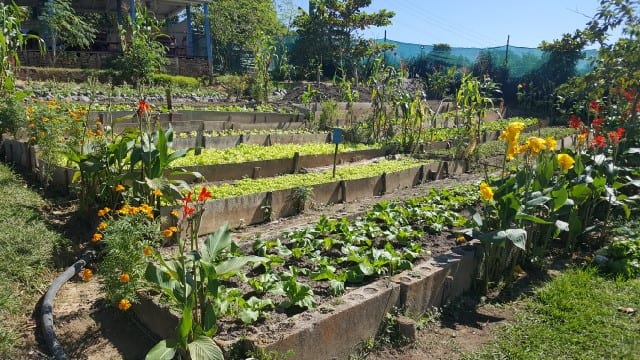 After the tobacco farm, we had a family-style lunch at Finca Agroecologica, a local family-run paladar set amidst organic gardens while looking at breathtaking, panoramic views across the entire Viñales Valley. Before heading back to Havana, we stopped in the town of Las Terrazas, a UNESCO Biosphere Reserve where we enjoyed a cup of coffee at a local cafe and explored the ruins of one of the oldest coffee plantations in Cuba, built in the 18th century. 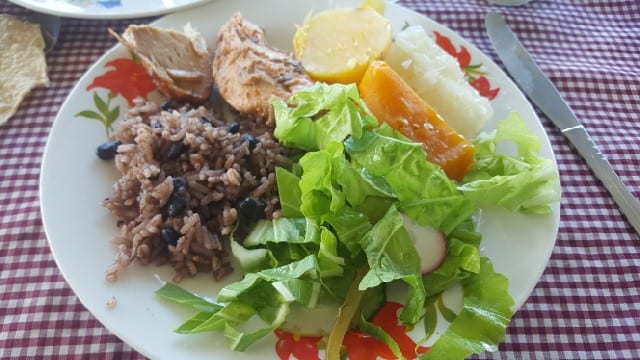 Experiencing The Life of the Cubanos

After visiting organic farms and seeing the productive side of food development in Cuba, our guide, Pototo, took us to see how the people live day-to-day. We walked through a rations market. A space with empty counters, there was a chalkboard by the entrance listing the rations and costs. Each family has a rations book with the allocations of how much they can have per month. 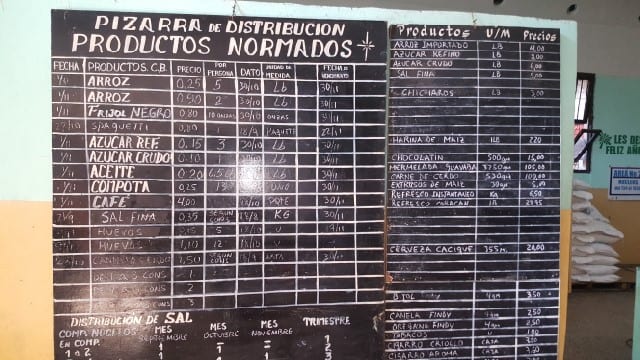 The rations are the basics: rice, beans, coffee, salt, sugar, eggs. While people are not starving, it is very little food. If a family has extra money, they can purchase fruit and vegetables at the Mercado Agropecuario, a produce market, next door. 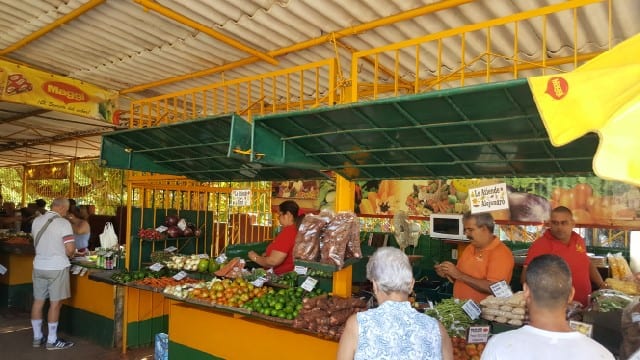 We walked through looking at the various fruits and vegetables, as well as meats. A covered market, in many ways it looked like a farmers market in the U.S. But, looking at the meat display and counter, it was clear it would never pass a test by American standards, and I could understand why a lot of the meat in Cuba would be over-cooked just as an extra precaution. 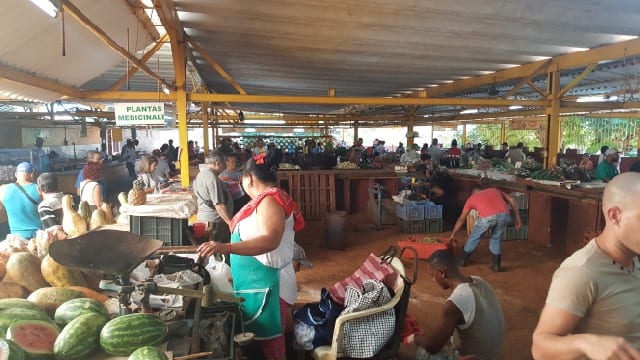 They sold Cuban wine in the market and I had to pick up a bottle but let’s just say that the Cuban wine industry is not something we will be hearing about any time soon. We also went to a supermarket where we saw the shelves lined with products, such as oil, soda, cereal, jam. But there is no selection. If you need oil, you buy what is on the shelves. You do not get to select olive oil, safflower oil or peanut oil. One week may be one type and the next week there may be another. 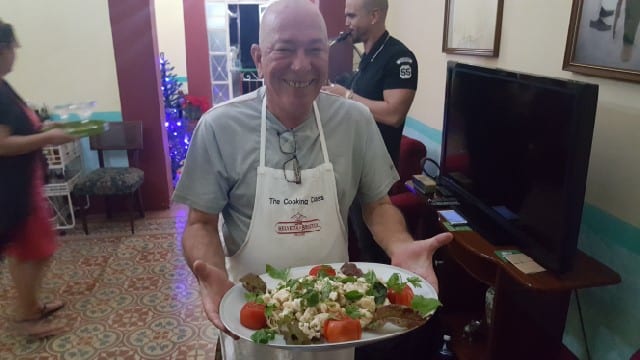 Name brands do not exist. When Pototo invited us to his home for dinner on our last night in Havana, we asked him how he made one of his dishes. He listed the ingredients, including oil. But when we asked him what oil, he answered that is was whatever was available in the store.

From Sea to Table 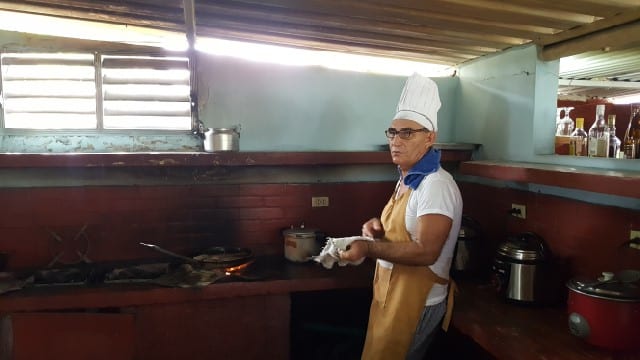