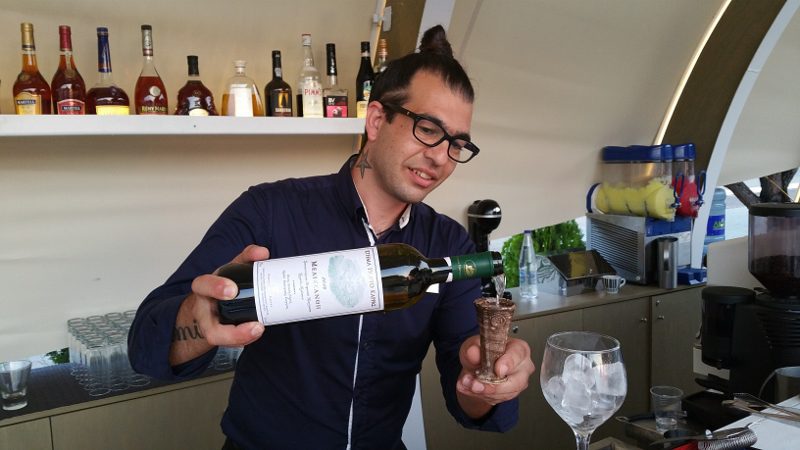 13 Aug Showcasing the Wines of Porto Carras in Cocktails

Cocktails made with wine? I have had wine based cocktails when the wine base is Port, Sake, Soju, but a cocktail made with Rose, Cabernet and other Greek varietals? My first reaction is that I am a purest when it comes to wine. I don’t believe in adding ice cubes or coca cola to wine. But, while visiting Porto Carras, a winery and resort located in the north of Greece, an evening at Calma, the newest bar on property, I was pleasantly surprised with how beautifully the wine cocktails showcase the Porto Carras wines.

Bartender Dimitris Galanis is responsible for creating the wine cocktails at Bar Calma at Porto Carras. I met him on the day that he was promoted to supervisor for all of the bars on the resort property, including Bar Calma, two beach bars, and all of the main bars at restaurants in the hotel and marina. This is a well-deserved promotion as Dimitris has been honing his craft for the last eight years at Porto Carras, where he started as a barback, as well as spending the last five winter seasons working behind bars in Prague.

Dimitris focused on production while studying Food & Beverage at University. He had worked as a barback when he was younger and saw a bartender working, having fun and people enjoying themselves. He liked the idea and wanted to learn so he found a cocktail bar and asked for a job so that he could learn about this new world – distillation, dry ice, liquid nitrogen, herbs, flare, etc..

When Yliana Stengou, the owner of Porto Carras, asked Dimitris if he could make cocktails with the wines, his first thought was “no way”. Dimitris explained, “wine is an escort to food, but in a cocktail? Could I give a good result?” The challenge was to not destroy the wines and this was a huge challenge. Dimitris wanted to respect the wines. “I didn’t want to make the wine less than what it was. How do I put my hands on Chateau 2006? What about Limnio, a wine with a six thousand year old history and that the Cyclops drank. Who am 1?” But, as he thought more about it, he decided he was up for the challenge. 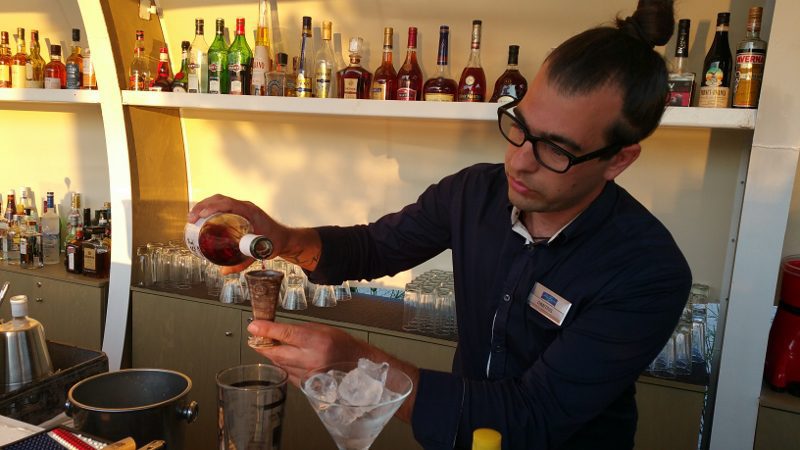 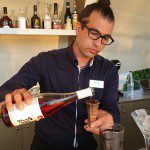 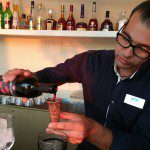 Dimitris explained that every night after work, he has the habit of sitting in a quiet spot on the stools at the main bar with a cold beer, and would take a look around and writes notes. One night he wrote the wines on sheets of paper with notes for all of the aromatics in each wine – herbs, fruits, spices – and then began thinking about what ingredients would mix well with the wine. “I began to see it all in front of my eyes,” he said. Five weeks later, Dimitris had a wine cocktail menu with six drinks ready to go.

Unexpected (Blanc de Blanc, Heradura Reposado, Benedictino, cranberry juice, lime) – The Blanc de Blanc is a dry white wine made with Athiri, Assyrtiko and Roditis. It is a bright, pale yellow color with an aromatic nose of flowers and citrus fruits. The fruit and citrus aromatics of this wine shine in this drink and the acidity of the wine adds a bright freshness.

Bake and Shake (Limnio, Jack Daniels, lime juice, sweet cherry) – Limnio is a dry red wine with a ruby red color and spicy aromas of pepper, cinnamon and ripe black berried fruits. This drink is based on a Smash and is fruity with dark rich notes from the whiskey.

Cosmic & Gentle (Chateau 2006, smoked rosemary, red, pink, green and black ground pepper, Metaxa, Disarrono, Cointreau) – Chateau is a blend of Cabernet Sauvignon, Cabernet Franc, Limnio and Merlot. The deep purple wine with notes of blackberries, vanilla and smoke and a velvet finish is complimented with the rich fruit aromas of the Metaxa, a Greek brandy made from Muscat. The smoked rosemary and various peppers add herbacious and spicy notes.

This Drink Did Not Have A Name Yet – (Rose, Skinos Greek Mastica, angostura bitters, white pepper ground, ground pink pepper, cucumber slices, shake) – The rose is made from Syrah and Cabernet Sauvignon and has a bright pink color and aromas of red fruit. The crisp wine was the biggest challenge to work with, Dimitris explained. But, the Mastica, which comes from the gum tree and has herbal notes, must be really cold for the flavors to come out, and they do on the finish of this drink. The result is a perfect refreshing summer drink under the sun.

Chrysallis (Semi-sweet Red wine, crème de cassis, cranberry juice, cinnamon, orange, top with Prosecco) – The wine base is a sweet red wine from Porto Carras that was too sweet for my liking when I tried it. But, in the cockail, the sweetness was minimized and the drink has a beautiful tartness.

Funky Aperol (Melissanthi, Aperol, San Pelligrino Waters) – Melissanthi is a white wine made from Assyrtiko and Athiri grapes. It has aromas of lemon, white fruits and mint and a delicate acidity. It’s a lovely balance to the bitter Aperol and the sparkling water gives a very subtle effervescence.

Dimitris has produced a very creative and tasty wine cocktail menu that showcases the wines and doesn’t mask them. Watch out for this young bartender. He was in the final 12 out of 460+ competitors in Greece in the 2013 Angostura Global Challenge. With a focus less on quantity and more on quality, he is very talented, passionate and loves his job and it shows through his drinks and service.

A Weekend Getaway at the Atlantis Casino Resort Spa Reno

Reno has not been on my radar for years, not since a college ski trip that had us based in…

My mouth starts to water when I think of fresh crudo - uncooked fish, thinly sliced and drizzled with olive oil,…

My mouth starts to water when I think of fresh crudo - uncooked fish, thinly sliced and drizzled with olive oil,…