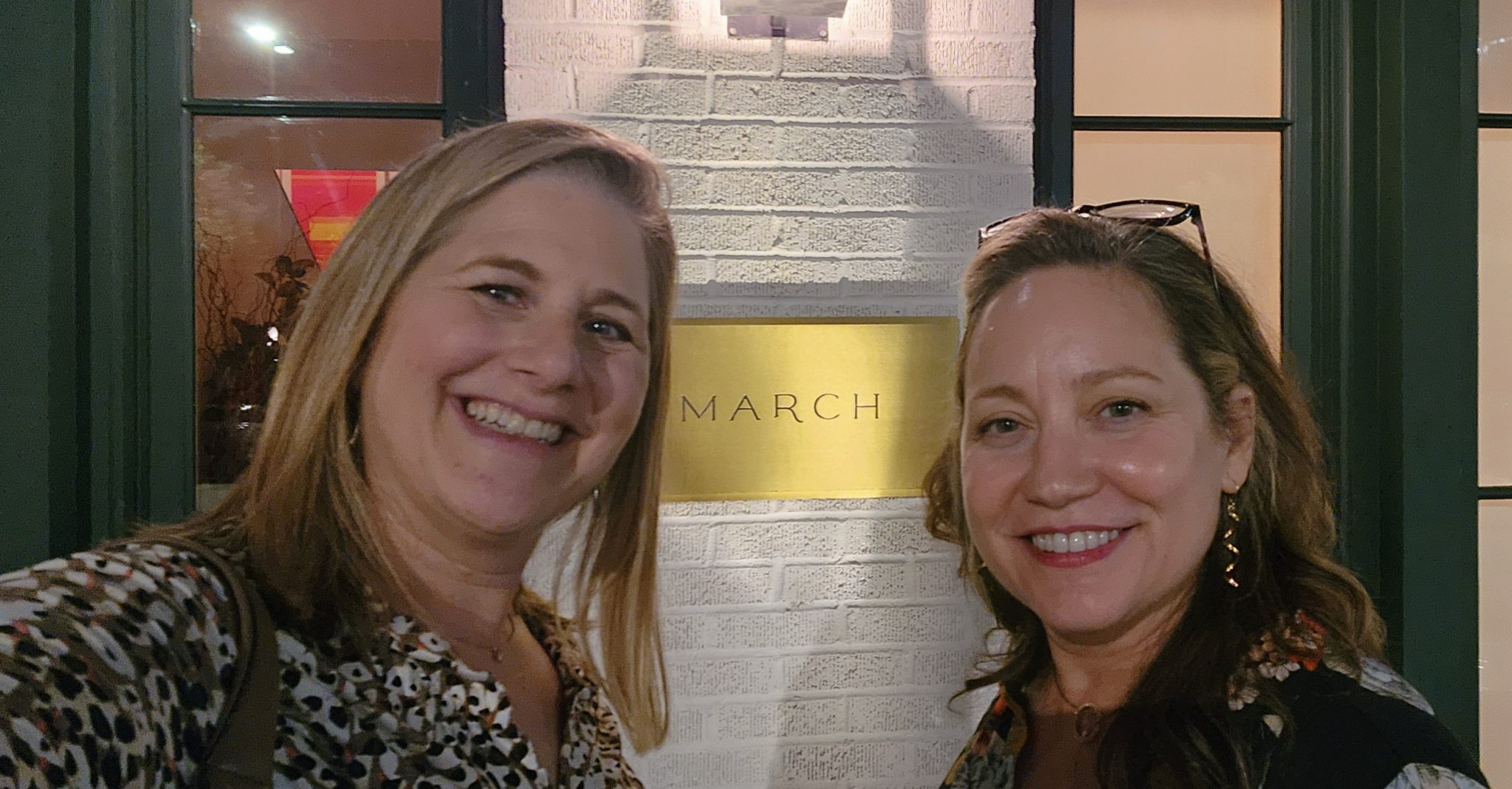 15 Oct Please The Palate Pick of the Week: March Restaurant in Houston, Texas

Houston, Texas is home to the most diverse population of citizens in the country. And with James Beard Award winning chefs like Chris Shepherd and Hugo Ortega, Houston restaurants have gained attention over the last few years. However, despite the growing restaurant scene of Houston, Michelin has not yet come to Houston. However, when they do, there is not doubt that March Restaurant will receive one, if not two, stars. And while March Restaurant may not currently have any Michelin stars, it is the Please The Palate pick of the week. 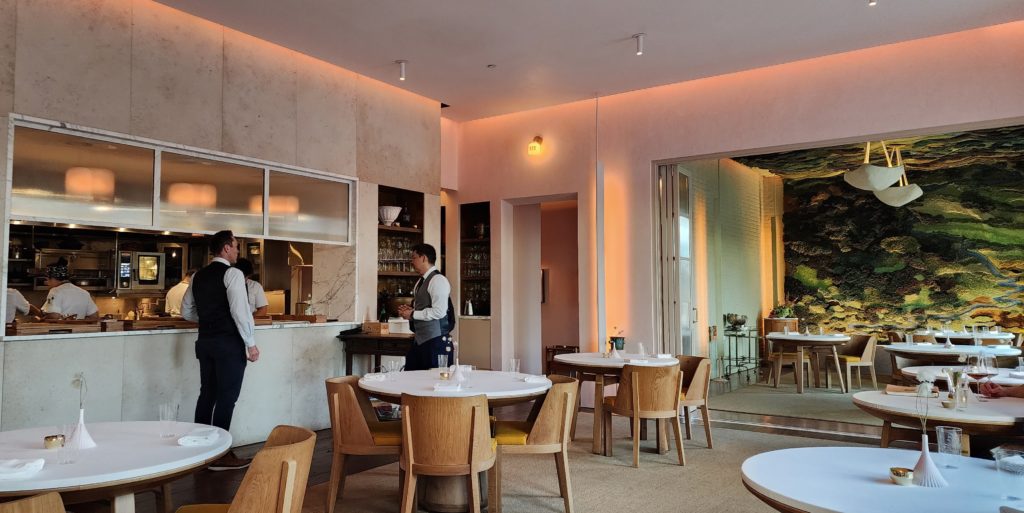 March Restaurant is part of Good Night Hospitality Group which also owns Rosie Cannonball, Montrose Cheese & Wine Shop, and The Marigold Club, and is managed by June Rodil and Chef Felipe Riccio. The concept of March is to explore gastronomy, history, and cultures of a region.

The March website explains that “the word ‘march’ signifies a territory in the boundary lands; an area of land on the border between two territories; a frontier between realms. Boundaries and frontiers are in part the same thing but have two different connotations. Those two meanings are very important to our philosophy of cooking. Frontiers are often discussed when talking about exploring and discovery; boundaries often represent limits, but for us, these limits drive us to search deeper. The edge effect is an actual ecological concept that describes how there is a greater biodiversity in the region where two adjacent ecosystems overlap, such as land/water or forest/grasslands.” 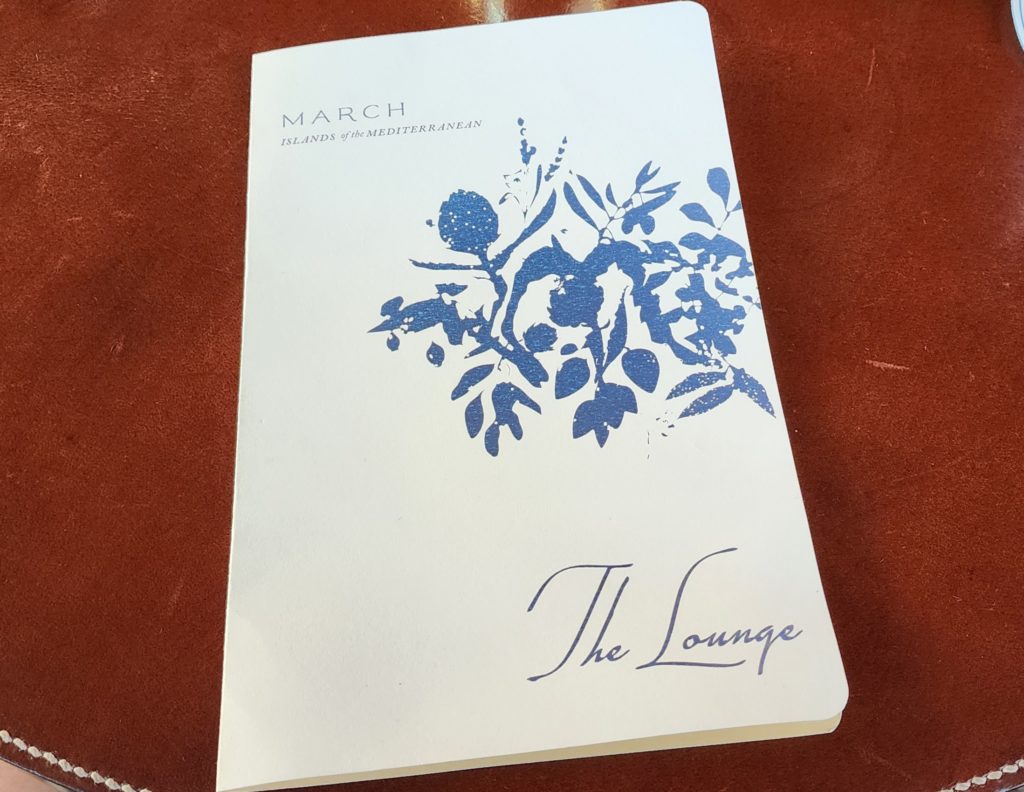 The current theme at March explores the islands of the Mediterranean. Featuring different ingredients, flavors, and traditions, the menu traveled more than 2000 miles, from the Balearic Islands to Cyprus, including Sardinia, Sicily, Greece, and the Canary Islands.

The choice at March is between a 6-couse and a 9-course tasting menu. As I was dining with one of my favorite foodie friends, we of course opted for the 9-course tasting menu. And we picked the classic wine pairing which was a selection of Mediterranean wines. With minerality and acidity, these food friendly wines each paired perfectly with the intended dish.

We arrived at March and were taken upstairs to the cocktail lounge where we were seated at a table and served a glass of the house-made March vermouth to wake up the palate. 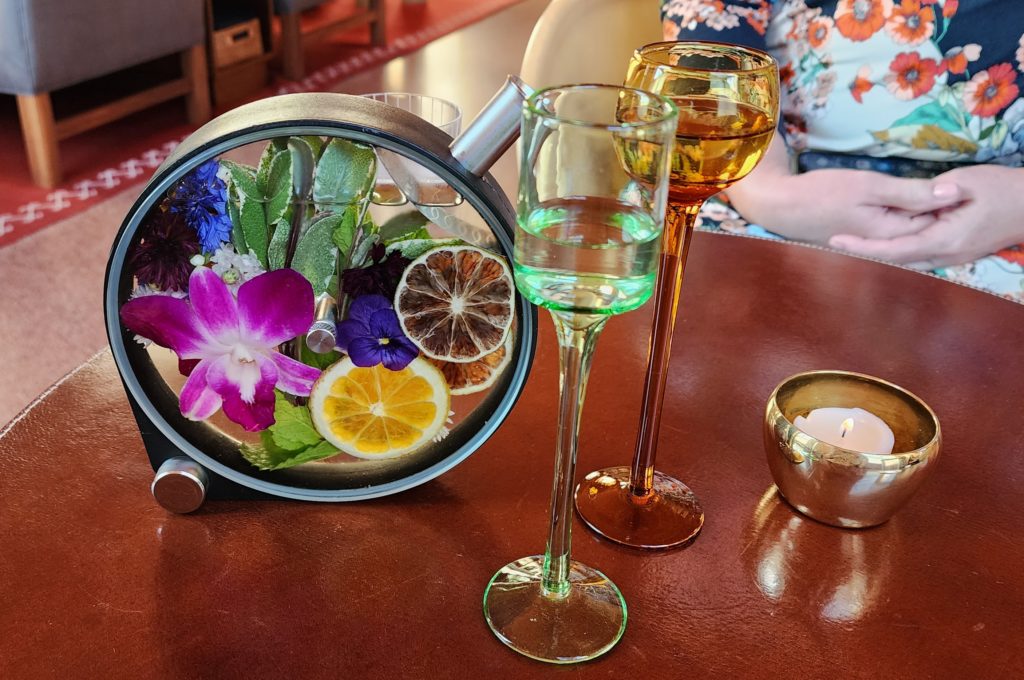 As we sipped the vermouth, we ordered our cocktails which were served by the lovely Isabel Hernandez. 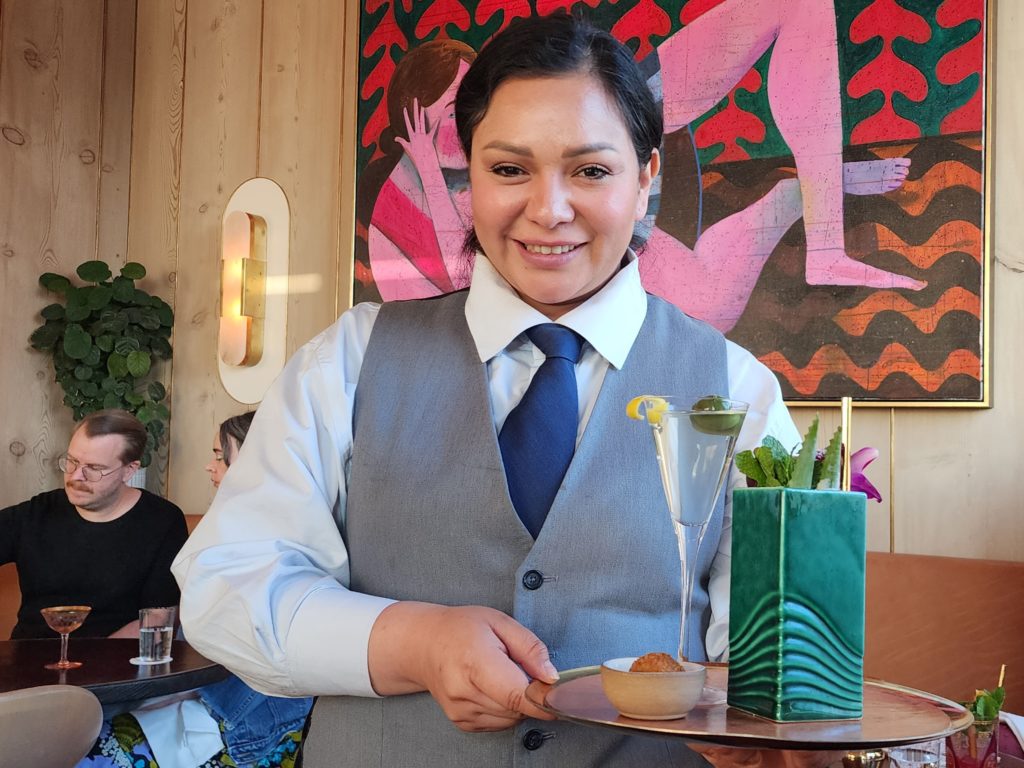 I selected the Konnos made with rum, amaro, pineapple, fig, and lime. My dining companion Sandra has the March Martini made with March Vermouth and bitters and served with a fried olive. 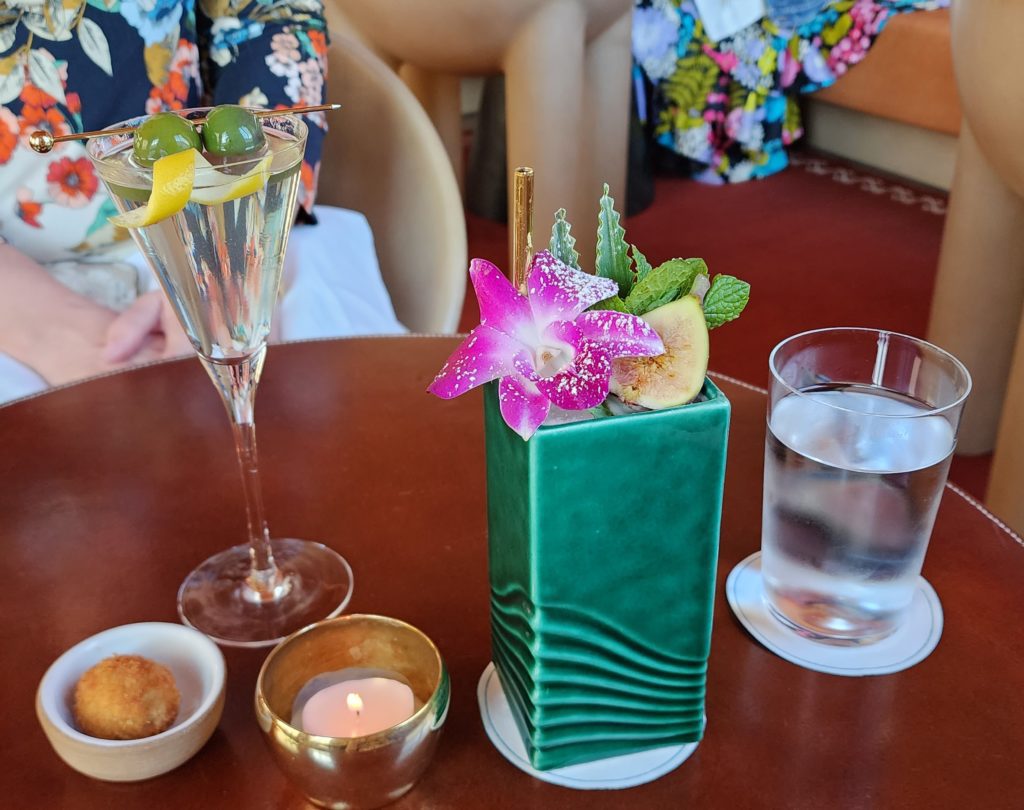 With our cocktails, we were served our first four little bites. The Lounge snacks were served on Portuguese Surrealejos tiles and included a terrine of taramasalata (fish roe dip) and a goat cheese tart. 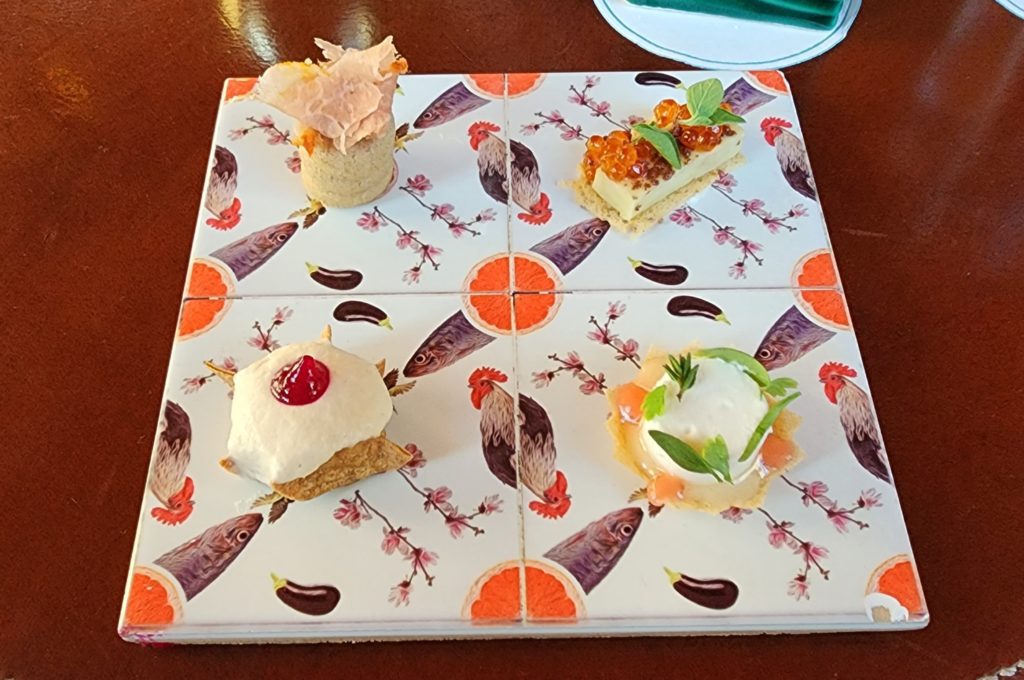 After finishing our cocktails and snacks, we moved into the dining room. There are two sections to the dining room. The main section has nine round tables well-spaced that face the open kitchen. There are additional seats in the adjoining room that has a living green wall and partial living green ceiling. Aside from the living wall, the decor is minimal with neutral colors. The simplicity of the restaurant allows for the focus to be on the beautiful dishes, as well as to watch the kitchen team quietly work. 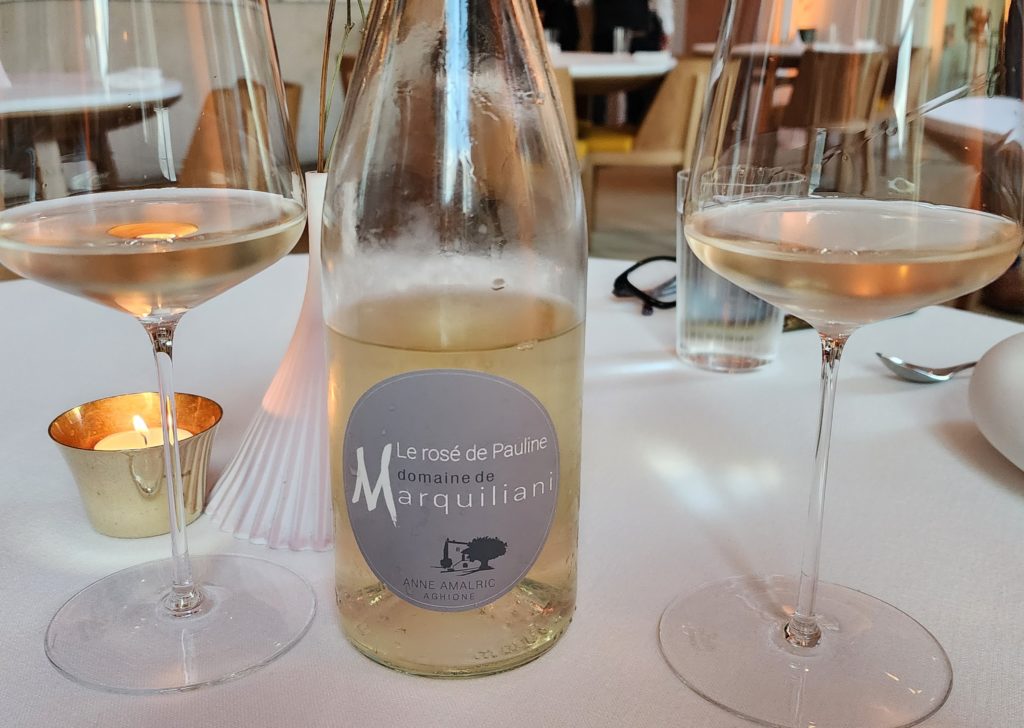 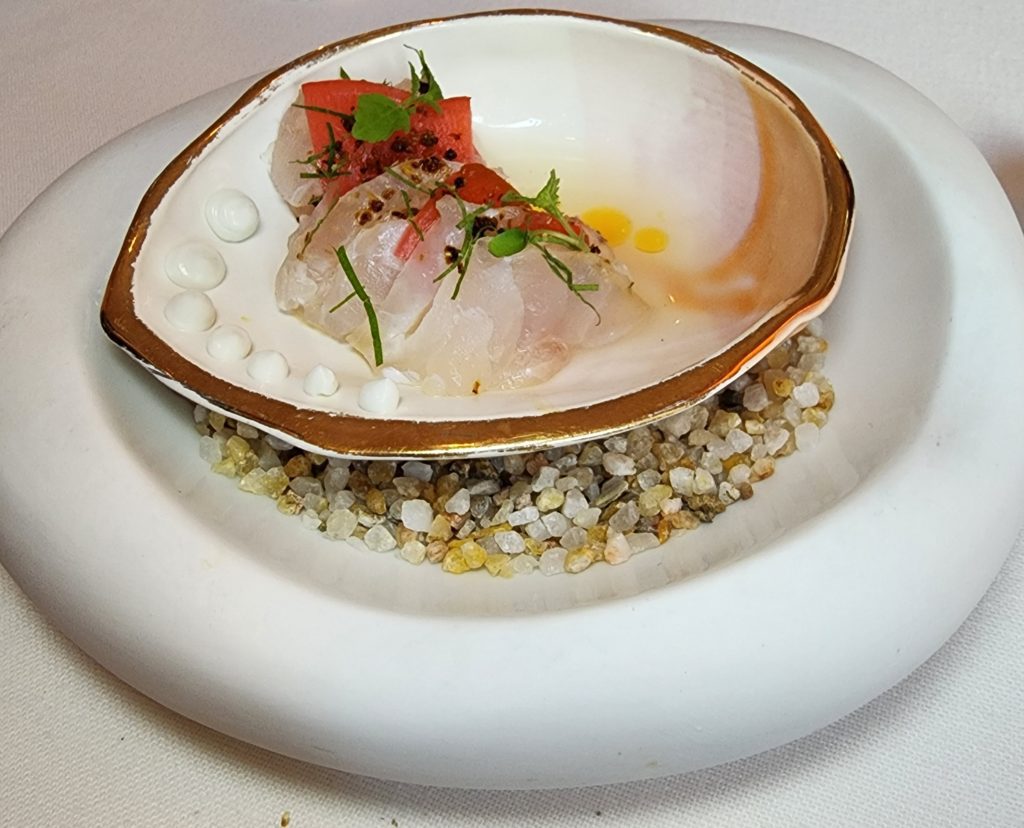 The 2020 Benanti Etna Bianco was paired with…. 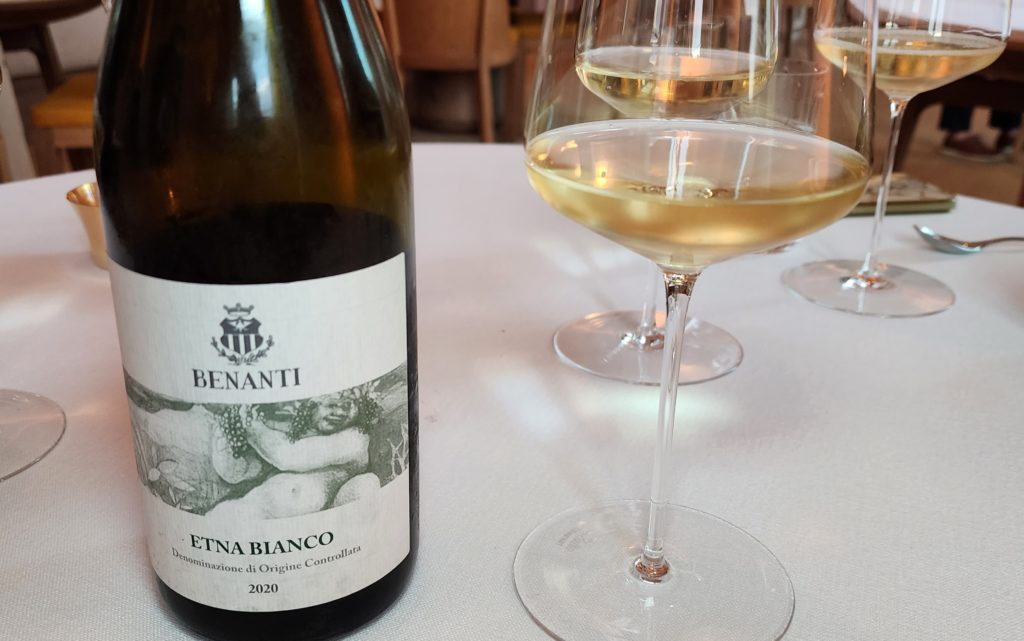 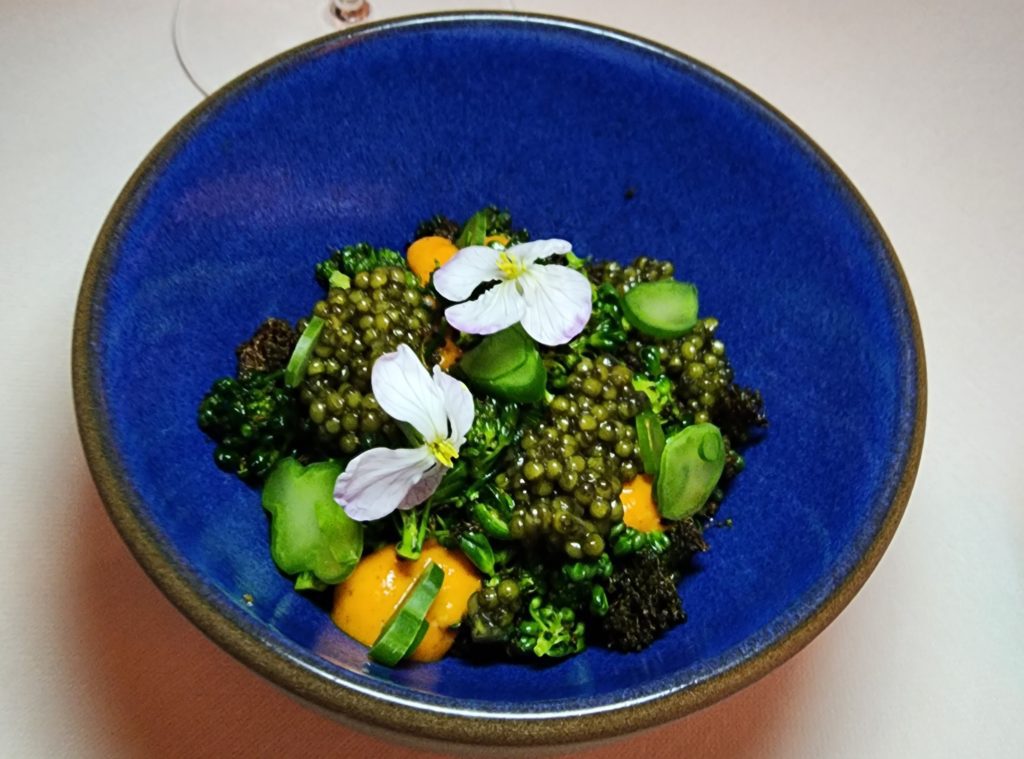 2017 ROFE by Puro Rofe, Malvasía-Diego-Listán Blanco from the Canary Islands was paired with… 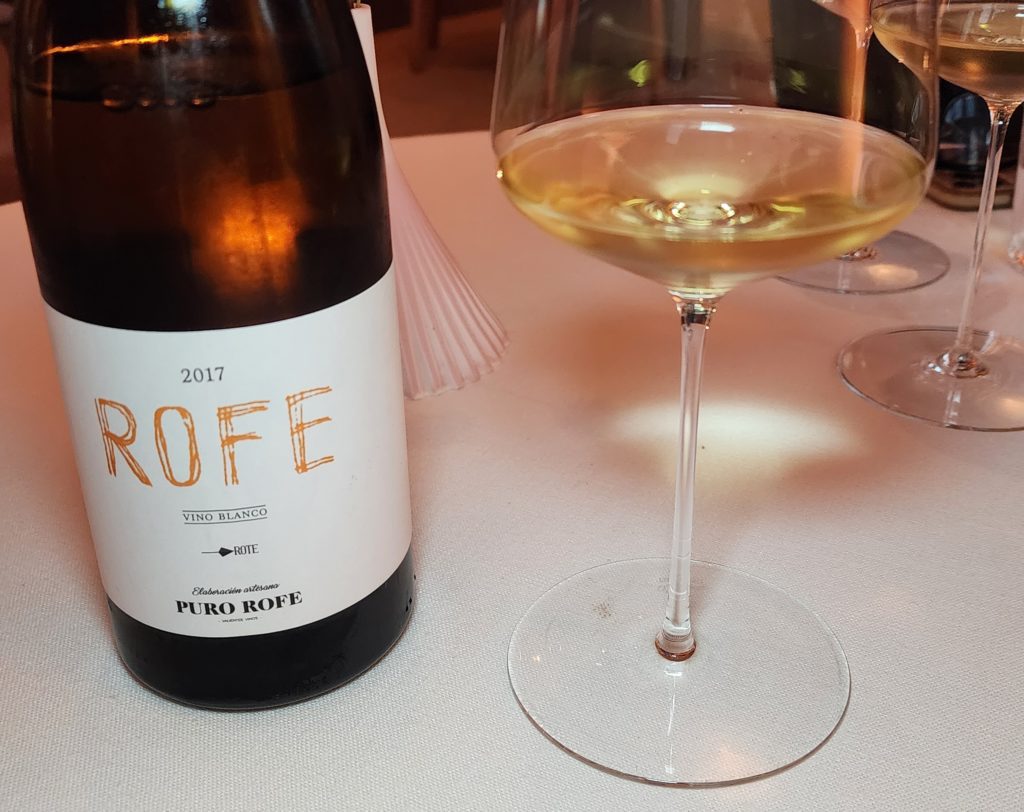 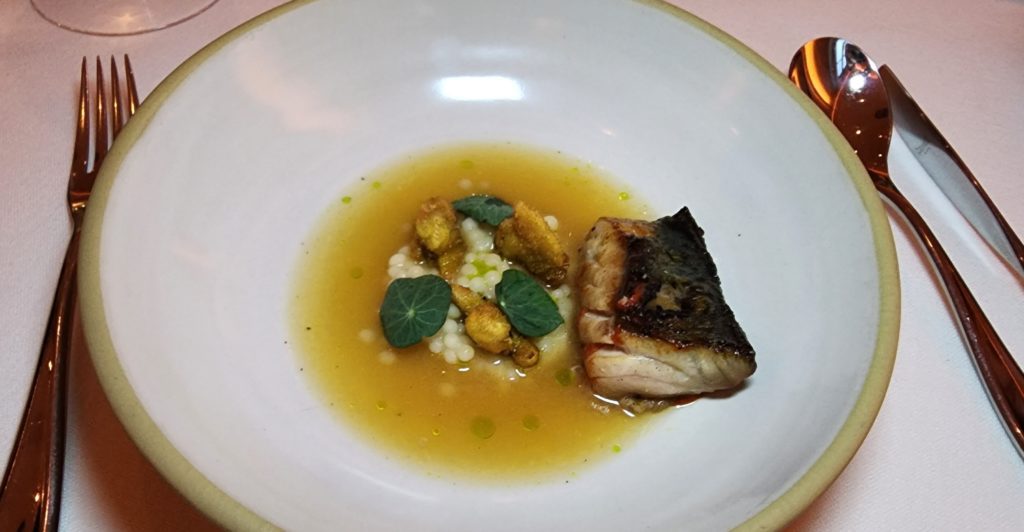 Fresh hot bread was served with a sausage spread but the bread was also great to soak up the broth of the fish. 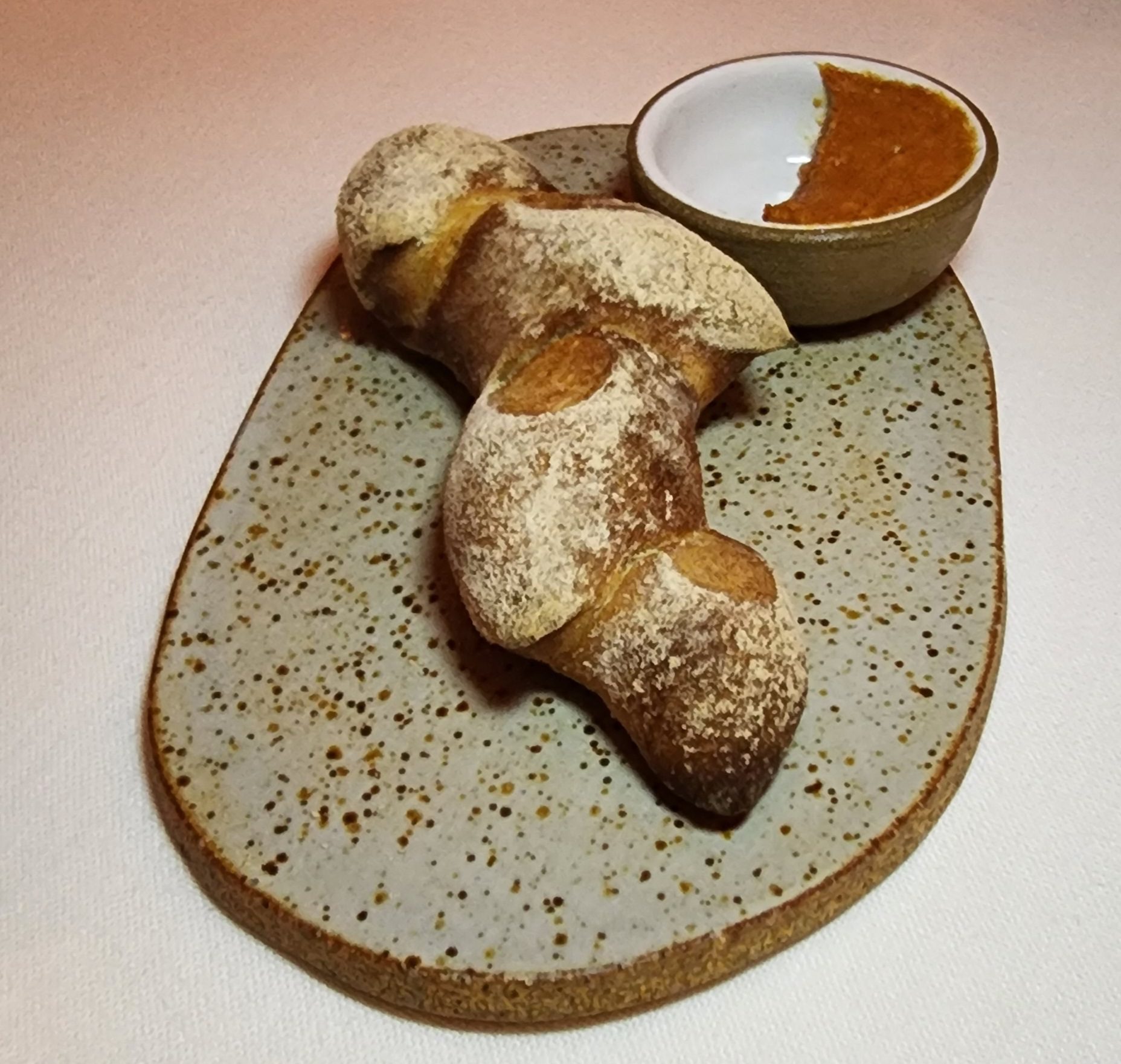 The 2018 Giovanni Montisci Cannonau ‘Barrasou’ from Sardegna was paired with… 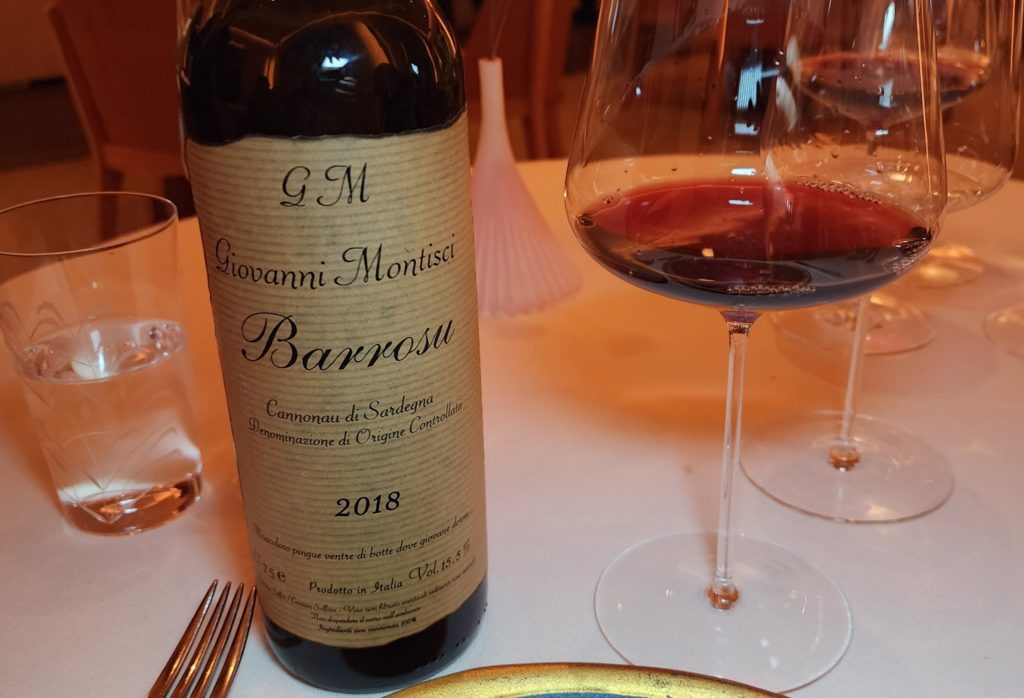 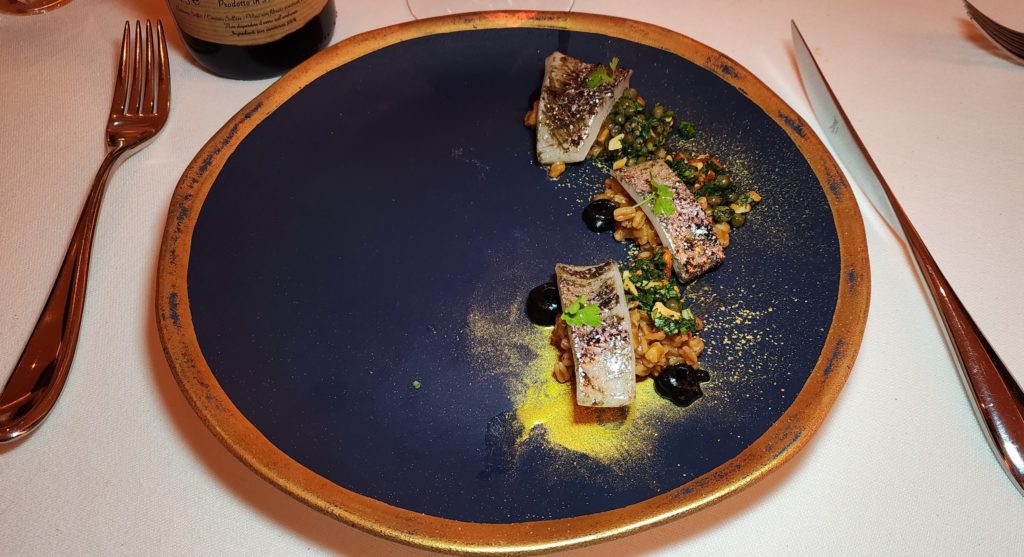 The 2018 Vigne Rada Cagnulari ‘Arsenale’ from Alghero, Italy was paired with… 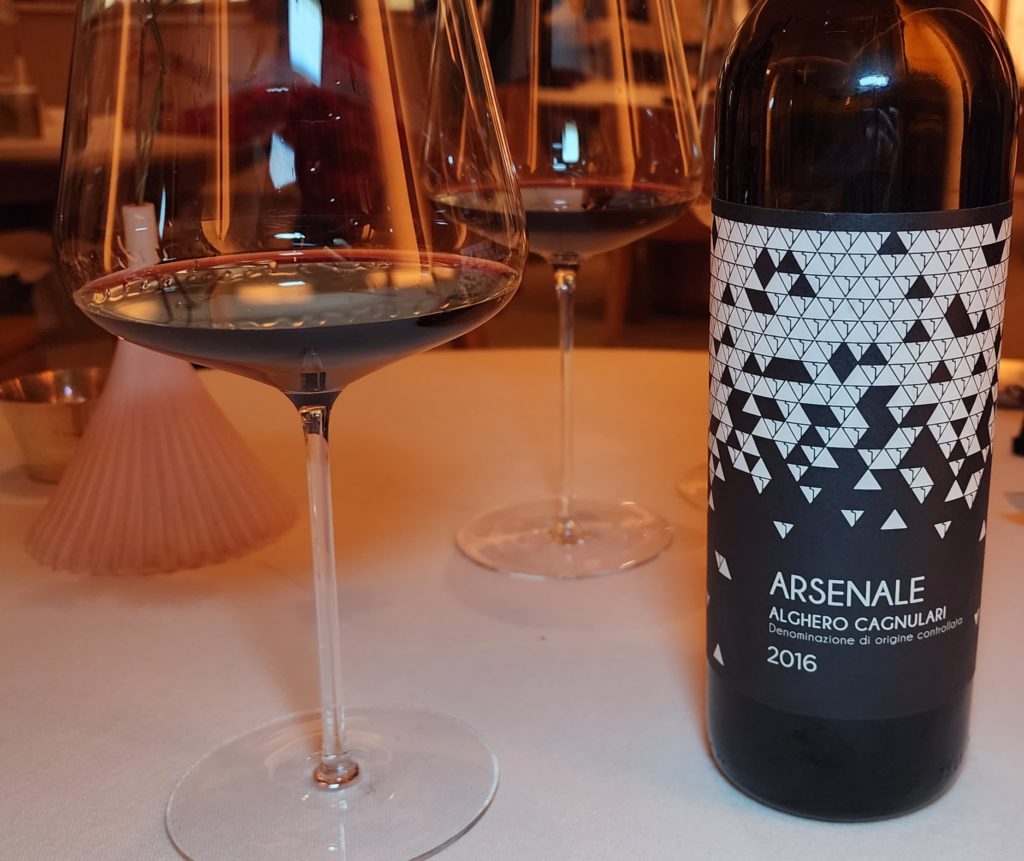