28 Dec The Return of Temecula

Have you been to Temecula? Only 100 miles from my home, I had never been. I have driven further distances to visit Santa Ynez and Paso Robles. I have even driven to San Diego to explore the wine but had always skipped Temecula until now. And I am very glad I finally went because Temecula is a region to discover as I wrote about in the Napa Valley Register and share here.

With a reputation for bachelorette parties, weddings and sweet wines, Temecula had not been on the top of my list of wine regions to visit. But after Temecula was named one of the top wine regions to visit by Wine Enthusiast in 2019, I was intrigued and finally made my first journey there.

Located northeast of San Diego in Riverside County, Temecula Valley has been growing grapes since the 1960s. The region of Temecula consists of 47 wineries and received American Viticultural Area status in 1984.

It is easy to think that Temecula is too hot of an area in which to grow grapes but there are similar regions in Spain and Italy that successfully grow grapes. With rolling hills that remind some visitors of Tuscany, Temecula is characterized as a Mediterranean climate. It is surprisingly close to the coast, approximately 22 miles “as the crow flies.” The ocean air travels from the city of Oceanside through the Rainbow Gap, a low spot in the Santa Margarita Mountain Range, into the valley, cooling the region in the evenings.

In 1999 Temecula suffered from Pierce’s Disease, which affected more than 300 acres, almost a third of the planted acres. This put Temecula on the world map and people from UC Davis came to help. Temecula became “ground zero” where methods to fight Pierce’s Disease were developed.

It took a lot of money to replant but this period also reinvigorated the winemakers who had to be more serious. The Pierce’s Disease outbreak separated those who were serious from those who were not. The destruction from Pierce’s Disease also gave Temecula an opportunity to plan new varieties, improve viticultural techniques, utilize canopy management and more.

Instead of just replanting Cabernet Sauvignon and Merlot, the producers in Temecula looked to varieties from other regions. Thriving in the region are Italian, Spanish and Portuguese varieties. And not just the well-known grapes from these regions, but also grapes like Falanghina, Arneis, Fiano, and Verdelho.

The wines of Temecula reflect more consistency today than in the past and while the region has received limited media attention, more than 22 million people live within two hours of the region.

After spending a few days in Temecula, what left an overall impression was the hospitality scene. Primarily a direct-to-consumer region, the wineries offer large tasting areas with views of Temecula Valley. Approximately half a dozen wineries offer accommodations for guests, and almost a dozen wineries have restaurants on property. Rather than competition, there is a comradery among the producers who support each other and recognize the complementary nature of their wineries.

Temecula is a region where you can choose your own adventure. For the wine lover, there is a diversity of grapes and styles. There are sparkling wines for those who want bubbles, or one can focus on Spanish varieties, Italian varieties, Portuguese or French.

South Coast Winery Resort & Spa
Probably one of the most known wineries in Temecula, South Coast Winery was started by Jim Carter who bought the property in 1981. Winemaker Jon McPherson and Javier Flores have been working together for 32 years. South Coast Winery has 40 different varieties planted and they make many small-lot wines, including sparkling wines.

They have many French varieties planted but McPherson and Flores chose to plant Portuguese varieties as well. They make a Big Red Table wine that is a blend of Tinto Nero, Tinta Cao, Touriga Nacional, Petit Verdot, and Tinta Roriz, as well as a white wine made with Verhelho.

Baily Vineyard & Winery
After tasting a 1974 Calloway Riesling from Temecula, Phil Baily knew great wine could be made in Temecula. He and his wife Carole moved to Temecula in 1981 and started Baily Vineyard & Winery in 1986 when Temecula was a nascent wine country. Considered a pioneer of the region, Baily does not think that Temecula will be known for just one variety. But, as a fan of Cabernet Sauvignon, he and Carol planted mostly Bordeaux varieties.

Bottaia Winery
The Ponte family, who opened the Ponte winery in 2003, were inspired by the luxury and refinement of Northern Italy and opened Bottaia in 2018. With 40 acres planted to Italian varieties, they produce wines such as Pecorino, Fiano, and Montepulciano. A visit to Bottaia can include a blending session in the lab, a pairing of wines with freshly sliced meats in the Charcuterie Bar or a day by the pool (yes, they have a pool!)

Robert Rezoni
Former musician Robert Renzoni was working in wine sales and distribution when he found Temecula. After working for large distributors, he started selling wine for local Temecula winery Leoness Cellars. By 2006, Renzoni had the urge to make his own wine, continuing a family tradition of making wine that dated back to the 1900s. 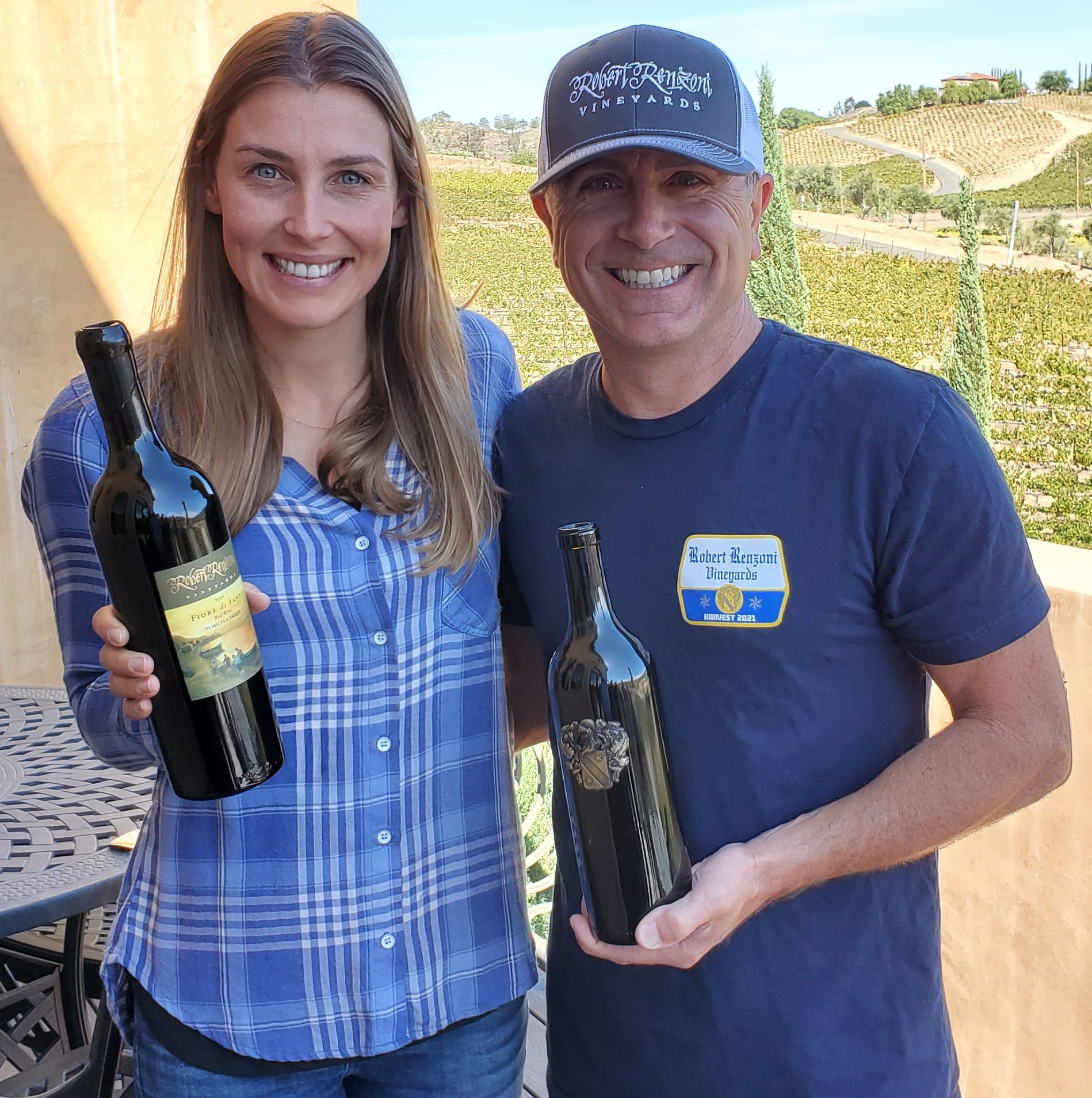 Renzoni had a feeling about Temecula, and today his estate property has 10 acres planted and he contracts another 100 acres from primarily Temecula, but also Lodi and Paso Robles.

Robert Renzoni Winery was the first solar-powered winery in Southern California, as well as the first winery in Southern California to have rainwater tanks. With similarities in climate, soil, elevation, and proximity to the ocean to Tuscany, Renzoni planted Italian varieties. His Montepulciano, Sangiovese and more can be enjoyed with a pizza at the trattoria at the winery.

Fazeli Winery
Bizhan “BJ” Fazeli had a successful career in infomercials where he famously coined the phrase “But wait! There’s more!” But a day trip in 2003 from Irvine to Temecula inspired Fazeli to purchase a 10-acre piece of land with an existing vineyard and start a winery. Fazeli’s Persian heritage is reflected in the winery, from the design of the winery to the Mediterranean-Persian food served in the restaurant on site.

Doffo Winery
The Doffo family, originally from Argentina, share a passion for motorcycles and wine. Patriarch Marcelo Doffo began making wine in his garage in 1997 after returning from an inspirational trip to Italy. Today Doffo Winery is run by Marcelo’s son Damian and his daughters Brigitte and Samantha. They focus on reds like Malbec, Zinfandel, and Syrah which can be tasted while looking at more than 200 restored motorcycles and scooters on display.

Altisima
Altisima is a modern winery with a Spanish flair. Established in 2017, Altisima opened in fall 2021 and offers spectacular views of Temecula Valley while sipping on Spanish varieties or eating at the Spanish-fusion restaurant on site.

The diversity and quality, combined with the hospitality, make Temecula a region worth exploring.

Holiday season is here! It is time to pop the bubbles! And just in time for Champagne Day, I am…

Plate it Forward for the holidays

It is the season of giving and if you are looking for another way to give, then look no forward…