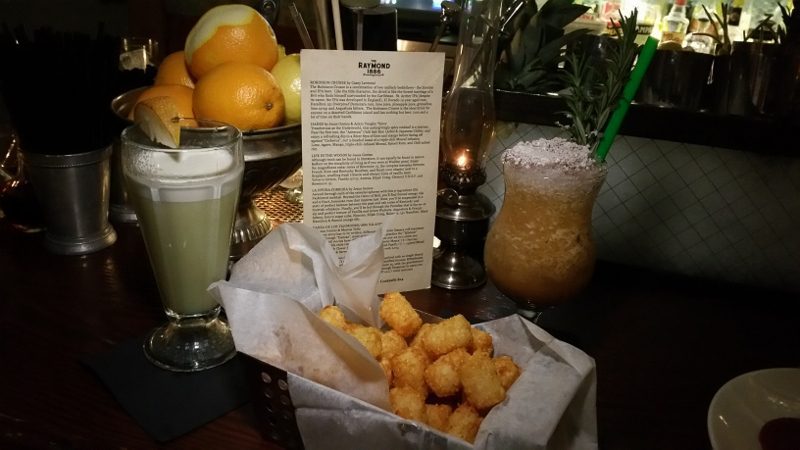 The Raymond in Pasadena is not a new place. In fact, it is rather old. Established in 1886, it was The Grand Raymond Hotel, frequented by East Coasters in the winter. The hotel no longer exists, but inside the original caretaker’s cottage is the home of The Raymond Restaurant and 1886 Bar. Tucked away and hidden by trees in a residential area of Pasadena, The Raymond and 1886 Bar are out of the way and hard to find. But, it is worth the effort to spend an evening here as you will immediately feel right at home in the cozy, intimate space.

Owned by Leslie Levy and her husband, 1886 Bar has been drawing in cocktail lovers from around the city since it opened in 2010, as well as garnering awards for the cocktail program. A small, low lit bar filled with dining tables, there is not a lot of room to stand along the bar. But, if you can get a spot, you are in luck. Once you have settled in, get ready to do a little work. The cocktail menu is not for the lazy. Each drink is named after a literary reference and eloquently described in paragraph format, like reading a story. It is worth taking a moment to read through it but if you refuse, the bartender is happy to help you with suggestions. Kafka On The Shore, a nod to the Murakami novel of the same name, is made with Japanese pear-infused Tito’s vodka, almond avocado milk, lime, simple syrup and egg whites. Maggie the Cat, inspired by the character Margaret in Cat on a Hot Tin Roof by Tennessee Williams, is made with gin, house-made Curaçao, Becherovka, Amaro Nonino, grapefruit, orange and lemon juices with a cherry dropped into the center.

At 1886 Bar, they have a hearty bar menu that is easy to fill up on. We shared an order of the tasty hot tater tots with spicy ketchup as we enjoyed with our drinks.

But we did not want to fill up too much as we had plans to move into the dining room for dinner. The dining room, or rather dining rooms, is small spaces throughout the house with a few tables in each room. There is also a back patio if you prefer to sit outside.

The New American menu offers a selection of vegetable dishes, seafood and steaks. The food is hearty, think elevated comfort food. The menu is divided into three sections, with plates getting larger in each section.

Quick Bites – These are the perfect dishes to order quickly as soon as you sit down and then enjoy them while you chose among the other items to order. Artisanal Baguette with our homemade spreads, such as Jalapeno butter

Starters – This section is dominant with vegetable dishes as well as small fish plates, such as mussels, sashimi and octopus. The starter plates are large enough portions that you can share with friends. There are so many appealing choices that I could make an entire meal just from the starter section. Tandoori Cauliflower, half a roasted head with mint-cucumber dip

Entrees – Larger portions, this section is where you find the heartier meat dishes, as well as a few fish dishes.