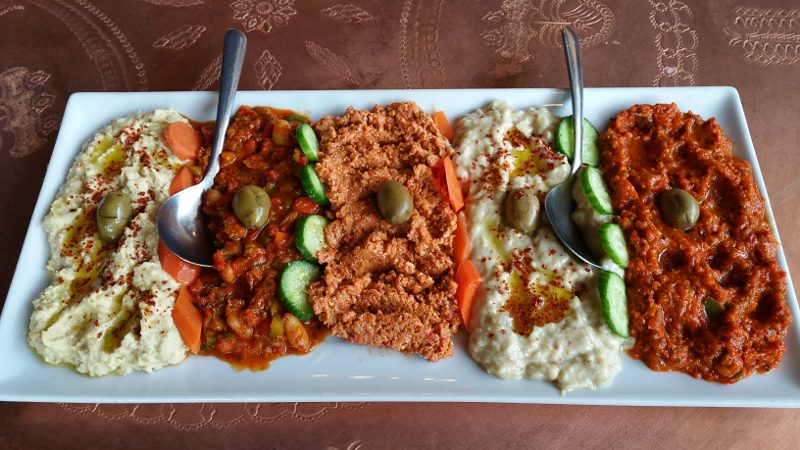 Kurdish cuisine in Agoura Hills, California (Conejo Valley). I am sure there are two things giving you pause in that sentence. Kurdish food in Agoura Hills? Probably not the first thing that would come to your mind when you think of Agoura. Or maybe you are just thinking, what is Kurdish cuisine?

Kurdish food was born in the mountains between Mesopotamia and Persia. The Kurds, an ancient people, can be found in Turkey, Iraq, Iran, Syria, Armenia and Georgia. The diversity in the food varies according to country where the Kurdish live, but in essence, it is Middle Eastern cuisine. There are aspects of Arab, Turkish, Armenian, Syria and Persian cuisine but Kurdish cuisine uses more fresh herbs, subtle spices and lots of vegetables.

Niroj, pronounced “nirough” and meaning “new day”, is located just off the 101 freeway at Reyes Adobe. Tucked in the back of a strip mall, next to a cleaners, dental office, hair salan, nail salan, Irish restaurant and a Kosher pizza place, a Kurdish restaurant is not what you would expect.

Niroj is the only Kurdish restaurant in Southern California and the only Kurish fine dining in the entire Western part of USA. Opened February 2013, Niroj is the creation of Luqman Barwari, a Kurd originally from Iran. Barwari came to the US at the age of eighteen and worked as a molecular biologist for many years. He established his family in the Conejo Valley and when he was laid off from his job in the sciences, he began studying Kurdish cuisine. From 2006 to 2011, Barwari would go to the Kurdish area in the Southeast region of Turkey and immerse himself in the cuisine.

The restaurant is warm and inviting with pillows, artwork and furniture that he has picked up throughout his travels in Turkey and other countries. There is a bar as you first walk into the restaurant with the lounge to the left and the dining room to the right. A soft-spoken, gentle person, Barwari is passionate about the food and sharing the cuisine of his heritage. He is a self-taught cook who created the menu and prepares all of the dishes in the restaurant. As the Kurds live in high altitudes and mountainous regions, they use the herbs, spices and vegetables found in nature. And that is what Barwari does, working with local farmers as well as growing vegetables in his own garden at home.

Niroj offers traditional Kurdish drinks, which are similar to those found in Turkey, Greece and other middle eastern countries.

Dew (pronounced “dao”) is a yogurt drink. Like Ayran, the national drink of Turkey, it is a cold yogurt beverage mixed with salt. The Dew is also mixed with mint and the result is a light drink that is sour and minty and very enjoyable.

Kurdish Coffee is made with ground roasted terebinth beans is beautifully served in a silver cup with lid.

Barwari has also put together a creative and interesting wine list with wines from Italy, Turkey, Lebanon and even Armenia.

There is one soup on the menu called Nisk, made with a puree of red lentils, sun dried mint, a variety of vegetable and herbs and Kurdish spice essence. The soup is so flavorful that I am now a fan of lentil soup which I was not in the past.

SiPan Meatballs are made with house-ground spicy lamb and beef, jasmine rice and mozzarella cheese, over yogurt and cucumber sauce. These meatballs are a creation of Barwari.

The mezze plates are enjoyed with fresh breads straight out of the oven. The Naan is thick but I loved the Lavash, thinner than naan and comes straight out from the oven and is topped with zatar and olive oil. The salads are all made with fresh vegetables from Barwari’s garden and from other local farmers. The kitchen at Niroj has both an open flame grill and a stone oven. From the open flame grill, the Kebabs are made. From lamb and beef to chicken, the meat is tender and full of flavor. The stone oven is where the Pides are baked. The thin-crusted dough stuffed with various ingredients is somewhat like a calzone. The stone oven is also where the stews, such as Bamya (beef stew) and Mussaka (layers of zucchini, potatoes, eggplant with bechamel sauce) are cooked in terra cotta and then finished in the oven.

Whether you live in the Conejo Valley or are passing through on your way up to Santa Barbara from LA (or vice versa), pull off the 101 at Reyes Adobe and experience the Kurdish cuisine at Niroj. It will be worth it!

Will Phelps - The Next Generation

This story originally appeared in the Napa Valley Register (January 22, 2016) Growing up in Napa Valley surrounded by grapevines, Will…