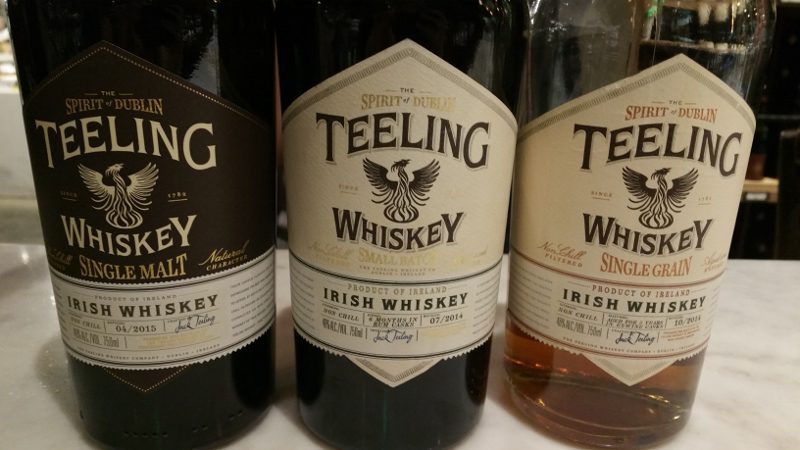 The Teeling family has been in the whiskey business for 200 years and Irish whiskey is in the blood of brothers Stephen and Jack Teeling. But Teeling Irish Whiskey wasn’t launched until 2015.

Irish whiskey had been one of Ireland’s main products and the top selling spirit prior to Prohibition. During Prohibition, Irish whiskey saw a decline in exports from 60 percent of the world market to only one percent, says Stephen. To survive and recover from the 40-50 year implosion of the industry, Ireland created one company which ran as a monopoly for 50 years. This monopoly was purchased by Pernod Ricard in 1987.

Stephen and Jack’s father saw the opportunity for an independent distillery. He challenged the monopoly and set up the Cooley Distillery in the 1980s, the first new independent Irish distillery in 100 years. Stephen was 8 years old at the time, his older brother Jack was 12. In 2012, Jim Beam bought the Cooley Distillery. To survive financially, the Teeling family took their family casks with them. With this stock, Stephen and Jack started Teeling Irish Whiskey in the heart of Dublin. Unlike traditional distilleries, they have taken a more urban approach. The working distillery is also a visitors’ center, allowing customers to see firsthand how whiskey is made. “We are a new personality,” Stephen says. “We are respectful of the past but confident of the future and are willing to take risks.”

Fresh Eyes on an Old Business

Making the only craft Irish whiskey in Dublin, people thought their innovations were crazy. Sometimes, Stephen explains, “If you are close to something for so long, you start to think that is how it has to be done.” Breaking with tradition, instead of putting their family coat of arms on the label, they chose a more iconic image, the phoenix, representing the rebirth of Irish whiskey. The label is a diamond shape in honor of the golden triangle of distilling, Dublin’s historical center of production. Every bottle of Teeling Irish Whiskey has the bottle date on it, as well as the wood treatments. The whiskeys are all 92-proof and non-chill filtered, which adds texture. Most importantly, as Stephen sums it up, “We lead with the liquid.”

Below, we glean firsthand insight of the biz from Stephen Teeling:

Foodable: What’s the most challenging part of the job?

Stephen Teeling: You can have the best product but getting into the market is tough. I can only be so many places and there are a lack of resources because we don’t buy placements. It drives us to work harder.

Foodable: What is the biggest lesson you learned in the first year?

ST: Don’t be afraid to hire talent. We are small and sometimes try to hold tightly. We thought we could do it all but now hired the right people with the right skills.

Foodable: What is your favorite cocktail to feature your spirit in?

ST: I prefer to drink it neat but a couple of my favorite cocktails* were created by our global brand ambassador, Kevin Hurley.

*Check out the recipes below!

Foodable: Where do you draw your inspiration from in crafting your spirit?

ST: We look at what is liked about Irish whiskey and think about how it can be enhanced. The goal is to try to have balance in all you do, to find a rhythm to it.

Foodable: What is the biggest piece of advice you could offer to those looking to work in the spirits industry?

ST: Don’t be afraid to try things and fail. Without taking risks you don’t achieve anything. Don’t chase volume for the sake of it. You can only compete if you innovate and add to it.

Today, Irish whiskey, according to Stephen, is the fastest growing spirit in the world. It has grown double digits in sales over the last 10 years and is expected to grow another 60 percent. Teeling Irish Whiskey is undoubtedly part of this renaissance.

Pour all ingredients into a cocktail shaker and shake vigorously for 10-15 seconds. Strain into a rocks glass/Julep cup filled with crushed ice. Garnish with a pineapple slice, mint sprig and cherry.

Add all ingredients to cocktail shaker with ice and shake vigorously for 10-12 seconds. Strain off the ice and dry shake without ice for 10 seconds (reverse dry shake method). Garnish Angostura bitters on top.

Give Vodka Another Chance

This article originally appeared in the Napa Valley Register (October 30, 2015) Is vodka your favorite drink? That was the…

This story originally appeared in the Napa Valley Register (October 23, 2015) Tara Gomez fell in love with the aromas…

This story originally appeared in the Napa Valley Register (October 23, 2015) Tara Gomez fell in love with the aromas…