11 Aug Please The Palate Pick of the Week: Signorello Estate

Less than a year ago, fires ravaged Napa and Sonoma. Thousands of acres burned, homes were destroyed and lives were lost. As we watched the news from afar, we received messages about wineries burning down. When the smoke began to clear (both literally and figuratively), we saw that most of the wineries remained standing. Less than a dozen of the hundreds of North Coast wineries were destroyed and one of them was Napa Valley’s Signorello Estate. 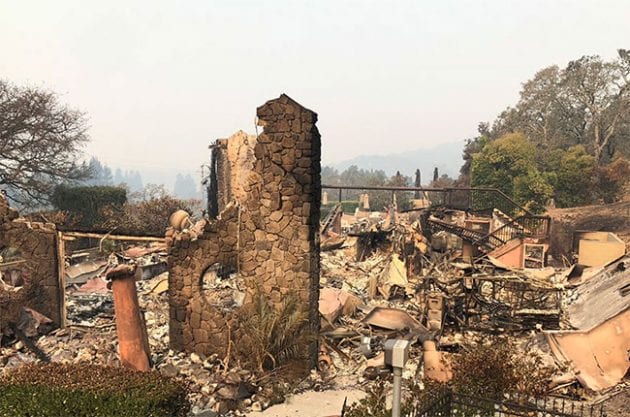 Ten months later, the remains of the fire in Napa can be seen by the burned trees and charred land. But businesses are running and wineries are getting ready for another harvest. And, that includes Signorello Estate. Because of their strength, resilience and overall positive attitude, Signorello Estate is the Please The Palate pick of the week.

Signorello Estate is located at 4500 Silverado Trail in Napa Valley. Ray Signorello Sr. purchased the 100-acre land in 1977 to house retired race horses. In 1980, he planted chardonnay and began selling the grapes from 1983-1985. By 1985, he began producing chardonnay under the Signorello label. In 1988, Ray Signorello Jr. joined his father and the hospitality center was built. By 1990, cabernet sauvignon, cabernet franc, merlot, Semillon and sauvignon blanc were planted over 45 acres. Ray Jr. and his wife, who primarily live in Canada, also built a home on the property in Napa.

On October 8, 2017, the fires ravaged Napa and Sonoma. Ray Signorello Jr.’s wife was visiting from Canada and was staying in the house on the property. She returned from dinner and saw the fires coming over the hill and the winds blowing. She grabbed her things and left to go to a hotel.

Around 10:35pm, Pierre Birebent, the vineyard manager and winemaker at Signorello since 1998, was awoken by a phone call. Fires are not uncommon in wine country and his initial reaction was to take it in stride. He got in his car to head to the winery to check on things and when he saw the hill above the winery on fire, he sped up. Pierre and members of his team came to the property and watered it. Pierre was told to leave three times but kept coming back. Finally, his team had to pull him off the mountain because the smoke was too thick and strong. Pierre left thinking that his life’s work was finished.

Sadly, the entire hospitality center burned to the ground, as well as the Signorello’s home on the property, including Ray Signorello Jr’s personal wine collection. In fact, all of the houses on the hill that were surrounded by trees burned. On the other hand, nothing that was surrounded by vines, included the winery at the top of the hill where the barrels were stored, burned. In the end, all of the barrels and tanks, which were filled with juice from the recent harvest, were completely fine. And, all of the vines were still intact (except for 20 vines which were lost when a fence fell over).

Ray Signorello Jr. has taken the loss in stride. He has already designed the new hospitality center and on Friday, July 13, 2018, almost nine months to the day, Signorello Estate opened up a temporary tasting room on the property. The mobile unit overlooks the vineyards. Inside, there are black and white photos of the damage from the fires but there is also a rendition of what the future permanent hospitality center will look like.

Signorello is open for tastings by appointment only. The $100 tasting includes four wines paired with small bites and is offered three times a day (10am, 1pm and 3pm).

Signorello Winery is resilient and looking forward and that is why they are the Please The Palate pick of the week.

It is easy to think that all Tuscan wines taste similar. But recently, I had lunch with Nicolò D’Afflitto, the…

This past weekend was the Seventh Annual International Albariño Days. It is also summertime and hot outside, so it took…

As someone who travels a lot, I have had to eat a few meals at airports before catching a flight.…