20 Aug Please The Palate Pick of the Week: Celebrating 25 Years at Doffo Winery in Temecula Valley

Despite the heat of 100 degrees, I spent the last weekend in Temecula with Doffo Winery. Celebrating their 25th anniversary, they hosted a White Party on Saturday night. In addition to the Saturday night event, the Doffo family showed gracious hospitality throughout the weekend and that is why a weekend of celebrating 25 Years at Doffo Winery in Temecula Valley is the Please The Palate pick of the week.

Marcelo Doffo, who is of Italian heritage, was born in Argentina. He immigrated to the United States and started making wine in his garage in Orange County in the 1990s. In 1997, he purchased vineyards in Temecula Valley. Today, Damian is the winemaker and Samantha and Brigitte work with him at Doffo Winery, where they make 10,000 cases of wine annually.

To kick off the weekend, Marcelo invited us to an Argentine BBQ at his home. Marcello and his wife Maria cooked the entire meal and we were joined by Marcelo’s three children – Samantha, Damian and Brigitte.

The Doffo family also gave us a preview of their 25th Anniversary bottling of Quattro, a red blend of four grapes that represents Marcelo, Samantha, Damian, and Brigitte.

Before the Doffo family had a passion for wine, they had a passion for motorcycles. Marcelo rode them in his childhood in Argentina and then opened an auto body shop when he moved to the U.S.in the 1970s. After he established Doffo Winery, Marcelo began to find and restore old motorcycles. Today the family has 253 motorcycles and scooters from around the world and from different decades, which are on display in the Doffo Winery Tasting Room, as well as in Marcelo’s home and in other storage units.

The next day we went to the Doffo Winery tasting rooms, also called Motodoffo. Surrounded by motorcycles, we tasted a number of the Doffo wines. The Doffo label represents wines made from grapes sourced from their estate vineyard. These wines are more terroir focused including the concrete fermented Viognier which has a pretty nose of floral and stone fruits.

The MotoDoffo line of wines are another series of wines. These wines are all blends and each year one white wine and four red wines are released. The label is different each year as the Doffo family selects different artists each year to design the labels. These labels showcase different bikes that are in the Doffo collection which in turn create a digital archive of their collection. 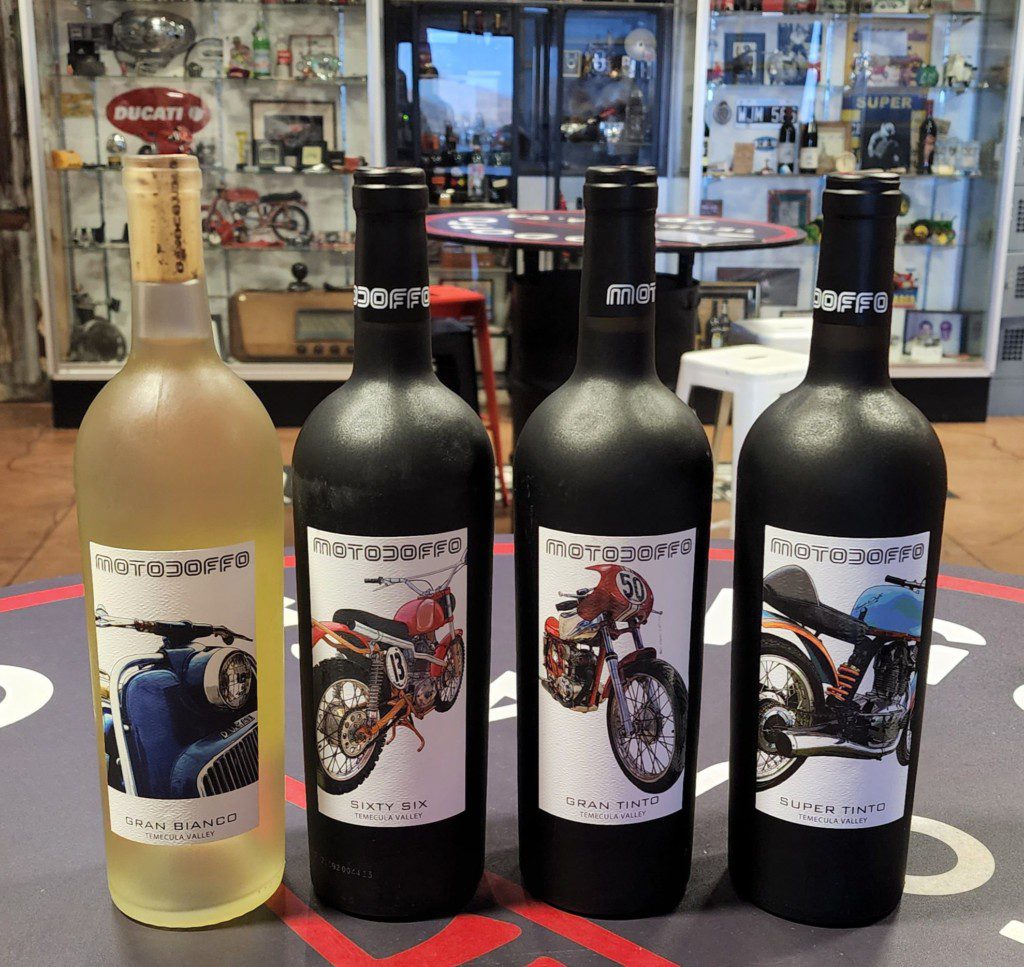 That night was the White Party. Everyone dressed in white, paella was served, a band played, and the 25th Anniversary Quattro wine was enjoyed by all.

The next morning we were up early to head out on a Side Car Tour around Temecula Valley.

With the wind in our faces, we did not feel the heat of the day. Riding around the open roads of Temecula was a great way to get a sense of the region.

We made one stop on our Side Car Tour at Relentless Brewing for a tasting of the MotoDoffo beers.

Despite the heat, it was a refreshing weekend that was well-needed. Happy 25th anniversary Doffo Winery! Thanks for a fun weekend escape filled with wine, beer, food, and motorcycles.

Verdicchio is an Italian white wine grape grown primarily in the Marche region in central Italy. One of the most…

Colombard, the offspring of Chenin Blanc and Gouais Blanc, is a white French wine grape that is traditionally used in…

Like Sauvignon Blanc? Then Try These Alternatives! - Crush On This Episode 108