Food and wine pairing is fun. Sometimes you know exactly what wine to pair with a dish and sometimes you take a gamble. Recently Lucia Palm and I decided to pair the wines of Mi Sueno in Napa Valley with Mexican-inspired cuisine. Pairing Napa Cabernet is not what I, or others, might normally pair with Mexican cuisine. Instead, a beer or a margarita is ordered. But, the Cabernet Sauvignon, Syrah and Chardonnay from Mi Sueno Wines all pair beautifully with Mexican-inspired cuisines, as I wrote about in Monarch.wine and share here.

Successfully pairing wine and food together will enhance any dining experience. It can seem overwhelming to know what wine to pair with what dish. The goal in pairing food and wine is to create harmony, as well as for the wine and food to complement each other. One simple way to pair wine and food is to think of regional pairings. For example, when you eat Italian food, pair it with Italian wine. Same for French food with French wine, Spanish food with Spanish wine, and on and on. But when it comes to Mexican food, what we do normally pair with it? Beer or margaritas.

Mexican cuisine is known for its intense and varied flavors, and it is natural to think about enjoying the food with beer or a margarita. Most Mexican restaurants do not have proper wine lists. But I am here to tell you that Mexican cuisine pairs beautifully with Chardonnay, Napa Cabernet Sauvignon, Syrah, and more, and especially with the wines of Mi Sueño Winery in Napa Valley.

Mi Sueño was created in 1997 by Rolando and Lorena Herrera. Both were born in Mexico, Rolando first came to Napa in 1976. After five years, his family returned to Mexico but two years later, at the age of 15, Rolando returned to Napa to live with his older brother and finish school. Hard work and an outgoing personality led to an opportunity to work the harvest at Stag’s Leap Wine Cellars. Rolando spent a decade at Stag’s Leap Wine Cellars, mostly as the cellar master, and also studied winemaking at Napa College. Rolando then worked as a winemaker at Chateau Potelle in St. Helena before starting Mi Sueño.

On a trip to Napa Valley a few months ago, I stopped at Mi Sueño for a tasting with owner and winemaker Rolando Herrera. As we were talking and tasting, my friend who I was with told me about a memorable event she had attended at Mi Sueño that paired the wines with recipes prepared by Lorena Herrera. Using fresh produce, Lorena’s recipes, which include shrimp ceviche, chiles rellenos, pork tamales, pork pozole, and chicken mole rojo, are from her Mexican ancestors and have been handed down generations.

I was intrigued. I thought about the spices and the rich flavors and wondered how a Napa Cabernet or a Syrah would work. So, I connected with chef and sommelier Lucia Palm and challenged her to come up with dishes to pair with the Mi Sueño wines. 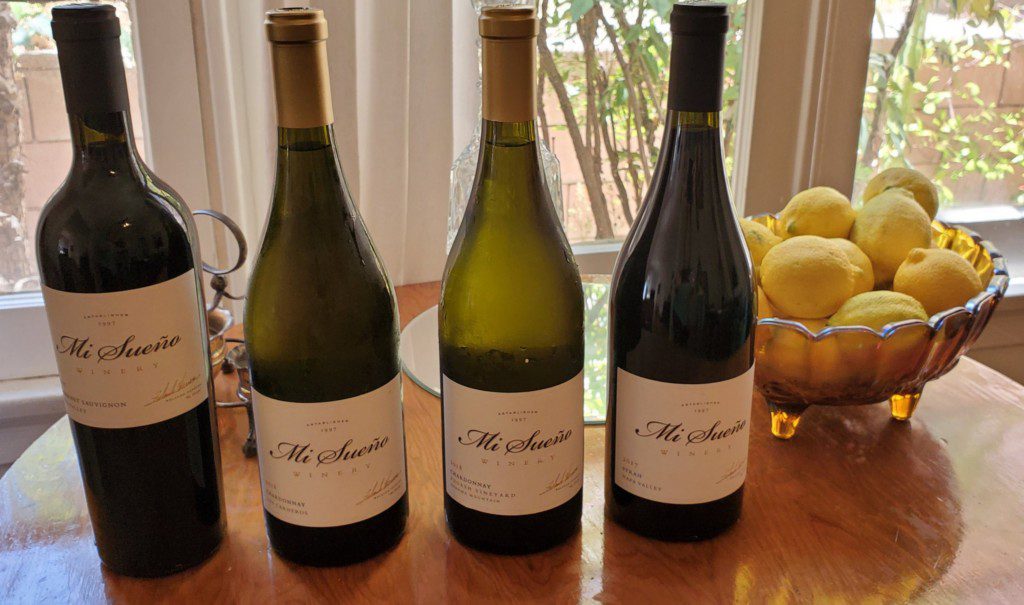 Sourced from the Tierra Blanca vineyard in Los Carneros, the grapes underwent native fermentation and spent 18 months in French oak, with 30% new. The wine underwent 100% malolactic fermentation and lees stirring. The wine is a brilliant pale-yellow wine with aromas of yellow apple, stone fruit, lemon curd, and brioche. Bright acidity and a tart roundness result in a lovely textured wine with a long finish.

The Chardonnay grapes come from the Pugash Vineyard in the Sonoma Mountains. The grapes were fermented and aged for 17 months in 65% new French oak and underwent malolactic fermentation. A clear, pale-yellow wine, the Chardonnay has aromas of pineapple, melon, apple, lemon, wet stone, and a touch of vanilla. On the palate, the vibrant wine has fresh acidity with a soft roundness in the mid-palate.

Aged for 20 months in 55% new French oak, the Syrah has aromas of dark fruit, plum, white pepper, espresso, leather, sweet tobacco, and vanilla. On the palate, the wine is rich and round with flavors of black cherry and chocolate. The wine finishes with good acidity and soft sandpaper-like tannins.

Aged for 22 months in 65% new French oak, the wine was aged in the bottle for an additional year before its release. A deep, dark garnet color, the wine has ripe fruit aromas of blackberry, black cherry, plum, and blueberry, as well as sweet tobacco and baking spice notes. The fruit notes continue on the palate and the wine finishes with juicy tannins.

Lucia, who posts her recipes on her Instagram @lucilovesfood, prepared four dishes, inspired by Mexican cuisine but with creative touches:

Guacamole with Charred Corn and Chips

Corn was sauteed with miso and butter and then added to the fresh guacamole, giving it a nice nutty flavor.

The shrimp was dredged in a tempura batter, then quickly fried twice to get them extra crispy. A quick slaw was made incorporating ingredients commonly used in Thai and Vietnamese cooking, such as fish sauce, Thai basil, and cilantro, and lime juice to tie it all together.

The flank steak was marinated in lime juice, garlic, and various spices and then cooked on high heat. Sliced thinly, it was served with warm tortillas, and topped with guacamole with charred corn, Pico de Gallo, and crumbled cotija cheese (which is like feta).

Pasilla peppers were de-seeded and then sprinkled with shredded Oaxaca cheese (which is like mozzarella). Cooked chorizo was crumbled on top and then more cheese was sprinkled on top, and then they were baked in the oven at 400 for 10 min.

Lucia and I sat down and tasted each dish with the wines. We agreed as to which wine paired best with which dish.

Showing harmony between the wine and the food, the Los Carneros Chardonnay was the winner with the tacos. It was the body, texture, and acidity of this wine that worked so well. The acidity in the Pico de Gallo matched the bright acidity of the wine while the batter, fat, and weight of the shrimp was a match to the weight and texture of the Chardonnay.

I was not sure how red wine would work with the spice from the chorizo, but the Syrah really worked well. The richness of the wine held its own while the dark fruit aromas tempered the heat of the chorizo and brought out sweet notes in the chile. It was the fruit flavors of the wine that made this pairing work so well, and a meatier styled Syrah might not have worked as well with this dish.

Pairing the tacos with the Cabernet Sauvignon was cohesive. The umami flavors of the carne asada softened the tannins in the wine, letting the fruit and spice notes of the wine shine.

Next time you enjoy your favorite Mexican meal, try it with a bottle of Mi Sueño wine instead of a beer.

Read the original story in Monarch.wine.

Please The Palate Wine of the Week: On Your Left 2013 Behind Bars Zinfandel Blend, Paso Robles

"On Your Left" is a cycling term used when preparing to pass a slower rider. On Your Left is also…

Strozzapreti is an antique type of pasta that is made across Italy. Known as the "priest strangler" (strozza means "to…