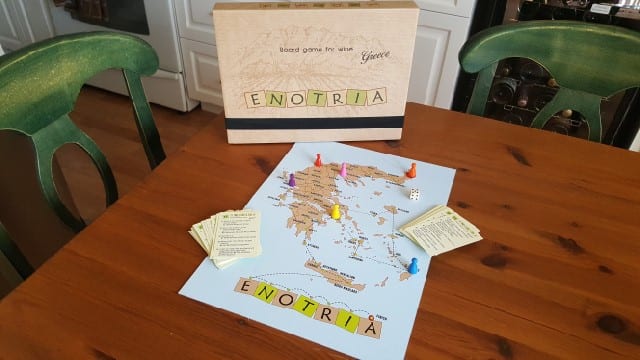 Learning about the wines of the world can be an overwhelming endeavor at times. There are so many countries that produce wine. Then there are all the regions within each country, not to mention the thousands of grape varieties.

Just when we get comfortable with the grapes and areas of Napa and Sonoma, then perhaps France, Italy or Spain, more regions are becoming prevalent in the U.S. market. Now we can find wines from Greece, Portugal, Georgia and beyond. And there is so much to learn. Greece alone has more than 300 indigenous varieties and more than two dozen wine regions. What do you know about Greek wines?

Here are some questions:

A dish of spaghetti on tomato sauce is best paired with:

A dish of baked potatoes with tomato and feta cheese is best paired with wine from which PDO Zone:

The first island that had wine classification in Greece was:

a) Crete b) Santorini c) Thassos

These questions and more are part of a board game called Enotria. Derived from the Greek word ‘oinos’, which means wine, Enotria is a game that takes players through all the wine-producing areas in Greece.

Enotria was created by Filippos Papadakis who lives in Athens. Papadakis is a brand ambassador for three wineries, works at a wine bar in Athens and is a student of the Wine & Spirit Education Trust (WSET).

Back in 2010, Papadakis was playing Trivial Pursuit with friends when he thought about how it would be great to have a trivia-style board game for wine. He researched and found that there was no game like that anywhere in the world so he decided to create one himself. He created Enotria board game in Greek.

But one year ago, Papadakis’ friend, and now partner, Costis Vlassopoulos, who owns Dia Tafta, a 20-year-old restaurant in the Plaka area of Athens, had the idea to make some changes and convert the game to English.

Packaged in a cool eco cardboard, it comes with the Enotria board, which is a map of Greece, six pawns, one die and 500 questions. The questions are all in English and cover the wine regions of Greece, the varieties, the producers and food and wine pairing. Each card has five questions on it, with the questions increasing in difficulty. You start at the top of the board, roll the die and must answer the question on the card that has the same number on the die. If you answer it, you move forward.

The game was launched in August, and I picked up my copy when I was traveling in Greece at that time. If you are traveling in Greece, you can find the game in wine bars, wineries, wine retail stores and hotel gift shops. You can also order the game online at www.houseofwine.gr/how/gifts-baskets/gifts.html and they will ship to the U.S.

The game is educational and fun. But it is not easy. The first few times you play, you will not know many of the answers, unless you are very well informed about Greek wine. But over time, you will become familiar with the wines, the producers and the places of Greece.

Enotria makes learning about a new wine region fun. Pick up a few bottles of Greek wine from your local retailer, perhaps an assyrtiko from Santorini and a xinomavro from Naoussa, invite your friends over and start playing. By the end, you will know what kidonitsa is, where the Monemvasia Winery is located and who the producer of the Kotyle wine is, as well as much more.

Papadakis and Vlassopoulos are now working on a global wine board game with wines from all over the world. But until then, get your Enotria Board Game and let the Greek wine games begin!

The Laws of Paso Robles

This story originally appeared in the Napa Valley Register. I am talking about Law Estate Wines from Paso Robles, not…