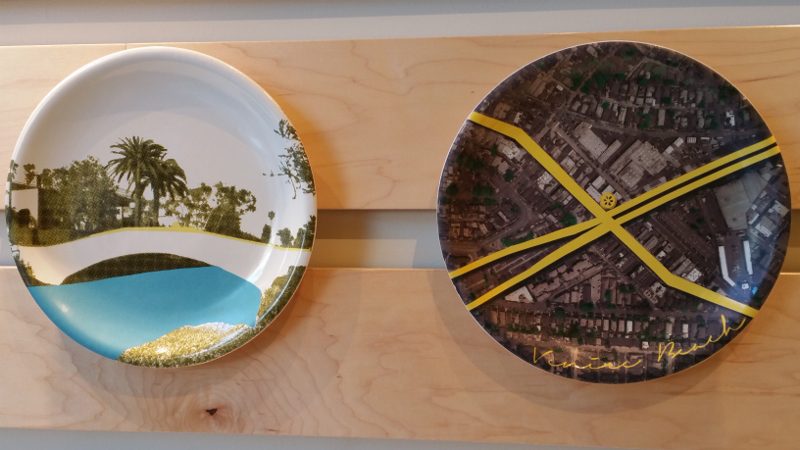 Los Angeles is a vast city with thousands of small neighborhoods, each with its own flair. It is difficult to define Los Angeles and in many ways, it is a city as disjointed as it is spread out. But in many pockets of these neighborhoods, Lemonade Restaurant Group has opened one of their fast casual, cafeteria-style restaurants that feature seasonal Southern California comfort food.

Owner Alan Jackson opened the first Lemonade in 2008 and today there are sixteen locations throughout Los Angeles, Orange County, Ventura County and San Diego, with four more pending, as well as two locations in the Middle East. Each location is bright and welcoming and offers healthy, flavorful food – salads, sandwiches, braised meats, desserts and of course lemonades. Lemonade is the spot where people go for a quick lunch or pick up food for an easy dinner, becoming a central location in a neighborhood. 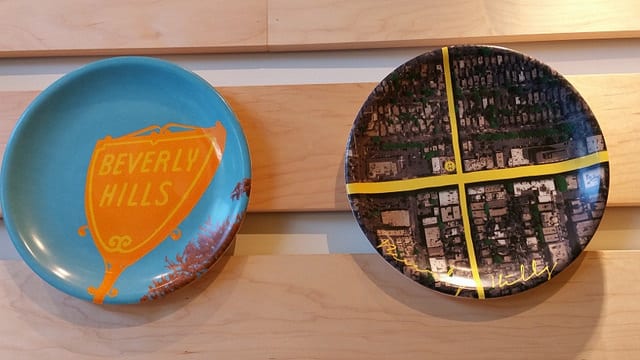 To commemorate the various neighborhoods that Lemonade has made as its homes, local designer Ilan Dei has created a series of 24 neighborhood-inspired stoneware plates. Each plate celebrates a different location with an image of what best represents that neighborhood. As Dei explained, “Los Angeles is such a multi-faceted city -we have people from over 140 countries, speaking more than 200 different languages, eating all different kinds of food. So, even though we’re one big city, it’s hard to define one style. The plates are a celebration of that diversity, with hints of the sun and weather unifying the graphics. We hope the plates will provoke conversation about each neighborhood’s specific locality, and we want to empower people to take ownership of their barrio.

Some neighborhoods, like Beverly Hills and Hollywood, have obvious icons which are immediately recognizable thanks to movies and television. Others require more discovery. For example, in Toluca Lake we revived an old book store that was an iconic symbol only locals might recognize.” A Santa Monica beach lifeguard station, the Rose Bowl, Griffith Park Observatory, Disney Hall, the LAX theme building, the Hollywood sign are just some of the iconic images that represent a city. Each theme plate has a second plate that is a satellite view of the neighborhood with a yellow lemon to mark the spot of the Lemonade location.

These original art plates are a great extension of the brand, allowing people to take home not only a memento from a local favorite restaurant but also a piece of the city they love and according to owner Alan Jackson, “the Neighborhood Plate Collection has been a huge success.” The plates can be purchased in the corresponding store for $26, or a set of two for $44. To collect all of the plates, customers need to visit each location on a sort of scavenger hunt.

“Locals and tourists alike dine at each of our locations to purchase the area’s signature plate – whether it is the iconic Hollywood Sign, Venice Beach Canals, or Pasadena’s Rose Bowl. Guests view collecting all 24 plates much like a treasure hunt! We recently even sent complete sets to Hong Kong and Finland. In fact, we’re in the process of launching a retail section on our website, so people from all over the globe will be able to own Lemonade plates,” continued Jackson. Until the plates are available online, customers can visit the newest Lemonade location on Sawtelle Boulevard where all of the plates are on display on the wall.

Los Angeles is an amazing city with great diversity and Lemonade honors the city with its plate series. “The plates are a way for us to celebrate the neighborhood, and give locals something that was made just for their community to take home and share with friends and family,” Jackson said. By celebrating the diversity of the city, Lemonade is also unifying the city.

Most of us probably don't know the historical happenings of 1765. But here is one thing that happened in 1765: Reverend…

As I have been working with some Greek wines of recent, I took note when I read an article in…

West Burgundy Wine Group is a new division at Jackson Family Wines that is focused on estate-grown, site-specific wines crafted…