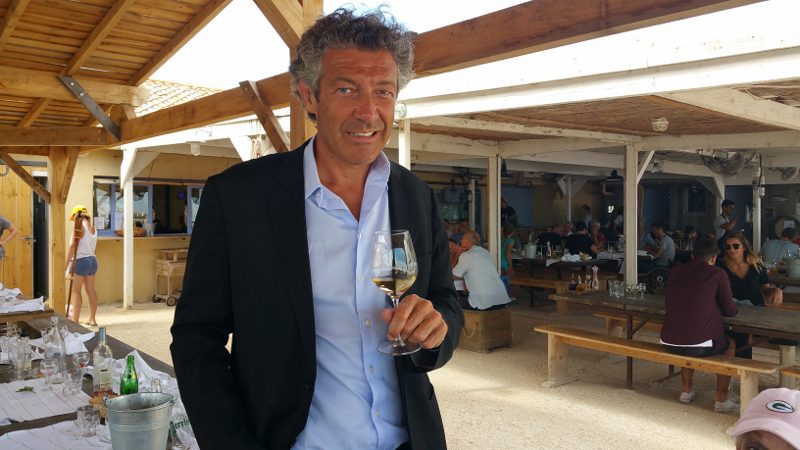 A recent trip took me to the Languedoc in the south of France for the Jazz Festival at L’Hospitalet. It was my first visit to the Languedoc-Roussillon wine region, which borders the Mediterranean Sea to the east and the Pyrenees Mountains to the south. I was ready for the wine, the sea and the jazz festival, but little did I know that I was about to be introduced to the art de vivre (art of living) by none other than Gérard Bertrand, the king of the south of France.

OK, Bertrand is not officially a member of the royal family. However, as you explore the Languedoc-Roussillon region, it will be almost impossible not to come across his name or one of the many wines that he produces.

Everywhere we went, his name seemed to be revered. And when we were with him, he knew everyone and everyone knew him. He is well-liked and well-respected throughout the region and beyond. At 6-foot, 5-inches tall, he is called Le Grand. But it is also his passion and dedication for the lifestyle and terroir of the south of France that earns him that name.

Bertrand was born in Narbonne in the Languedoc in 1965. He worked his first harvest at Domaine de Villemajou at Boutenac in Corbiéres when he was 10 years old.

“I worked from 5 a.m. until 1 p.m. every holiday and during harvest for two weeks,” Bertrand recalled.

He learned the virtues of hard work from his father Georges Bertrand who came to him after harvest and said, “You know, Gerard, you are lucky because when you turn 50, you will have 40 harvests behind you.”

He is now 50 and what his father said is true. I asked Bertrand if he always wanted to work in wine. He said he was not pushed into wine, but “a dog does not become a cat. Wine is my passion.”

Bertrand’s other passion is rugby; he played for 17 years at the highest level: He played with RC Narbonne and was the captain of the Stade Francais and later the president of the RC Narbonne.

He also studied agriculture in the university, and in 1987, at the age of 22, he began working with his father. Sadly, his father passed away a few months later, but not before sharing his passion for the terroir with his son.

As a winemaker, Bertrand developed an interest in biodynamics. As a 22-year-old, he had had liver problems and was unable to drink more than one glass of wine and was always sick. He began using homeopathic pills, and six months later he was able to drink two or more bottles of wine per day.

This was his first connection to the benefits of natural resources. Then more than a decade ago, Bertrand read Rudolf Steiner and connected to the principles of biodynamics because of the similarity to homeopathy.

Being pragmatic, he experimented by managing four acres conventionally and four acres biodynamically. After three years, he saw a difference, both in the vineyard and in the cellar. His biodynamically farmed grapes went from having low acidity and high pH to the opposite — high acidity and low pH, perfect for aging wine.

“Biodynamics changed my life,” Bertrand declared. “It is the DNA of the company.”

The company grew from four to 40 to 80 to 1,000 acres produced biodynamically. From his 600 total hectares (approximately 1,500 acres), at least 65 percent is certified biodynamic or in the process of becoming certified. Bertrand owns 11 properties, three of which are certified biodynamic, and he grows 30 different grapes. Today, Bertrand is a leader in the world for organic and biodynamic production.

The Estates of Gerard Bertrand

Domaine de Villemajou – In the heart of Corbiéres, Domaine Villemajou is where the family started in the 1960s. With 130 hectares, it was their first vineyard and today is the home of 100-year-old carignan bush vines.

Domaine Cigalus – Purchased in 1992, Cigalas, located in Bizanet (Aude), is the home of Bertrand, his wife and two children. It was the first biodynamic estate, certified 13 years ago. The 75 hectares of vines are planted with chardonnay, viognier, sauvignon blanc, merlot, cabernet sauvignon, cabernet franc, syrah, grenache, carignan and caladoc.

Château Laville Bertrou – Also purchased in 1992, Laville Bertrou is located in the commune of La Livinière (Hérault). La Livinière means “young vines” but the vines have been growing here for centuries. Seventy-five hectares are planted to syrah, grenache, mourvedre and carignan.

Château l’Hospitalet – Located between Narbonne and the Mediterranean, Chateau l’Hospitalet is in the Clape Coteaux du Languedoc. Sitting on 1,000 hectares, there are 82 hectares planted to typical Languedoc varieties including syrah, carignan, Grenache, mourvedre, bourboulenc, roussane and chardonnay. It is also the home to a three-star hotel and restaurant and the location of the annual jazz festival.

Chateau Aigues Vives – Located in Corbières Boutenac, Chateau Aigues Vives means “water of life.” It is reminiscent of the ancient Roman thermal springs that provide abundant groundwater that makes the terroir suitable to the growing of 30 hectares of vines of syrah, grenache, mourvedre and carignan.

Clos d’Ora – Opened in 2014, Clos d’Ora is a nine-hectare vineyard located at La Livinière in the Minervois. Syrah and mourvèdre have been planted alongside ancient carignan and grenache vines to produce a single estate wine.

His other estates include Château de Tarailhan and Château des Karantes.

From sparkling wines to reds, whites and rosés, Gérard Bertrand is committed to sharing the characteristics and diversity of each of the terroirs of his region, the Languedoc-Roussillon.

“I am passionate about the Mediterranean lifestyle and I want to promote and share the cultural and gastronomic riches of the South of France,” Bertrand said. And through his wines, he is teaching us all the “Art de Vivre.”

If I could, I would travel around the world eating at the best restaurants, the ones with Michelin and the World's…

Amidst the steakhouses and Italian restaurants that line Canon Drive in Beverly Hills is the Japanese restaurant Shiki. Actually it…