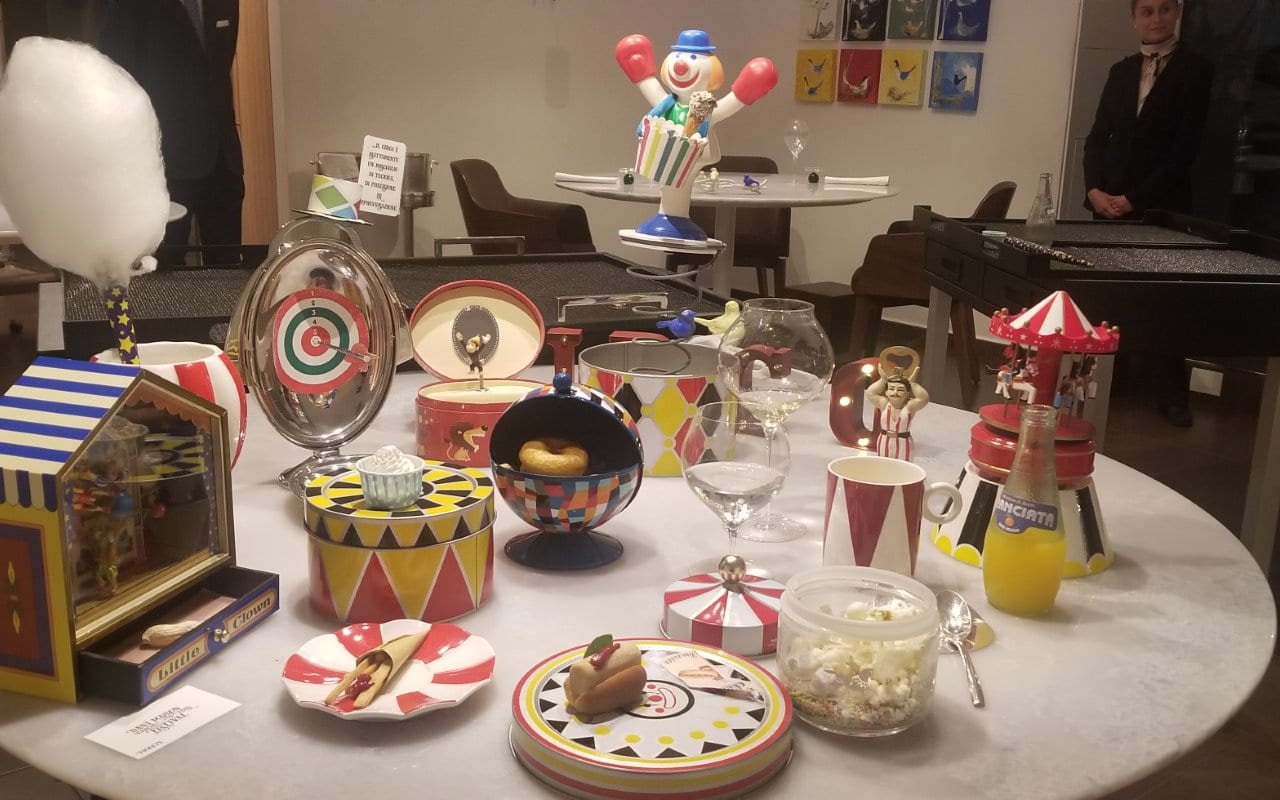 Sometimes there are meals that defy words. A meal that is an experience beyond your imagination and yet rooted in something you love, food and wine. That was my experience at Daní Maison, a two-star Michelin restaurant on the island of Ischia in Southern Italy. 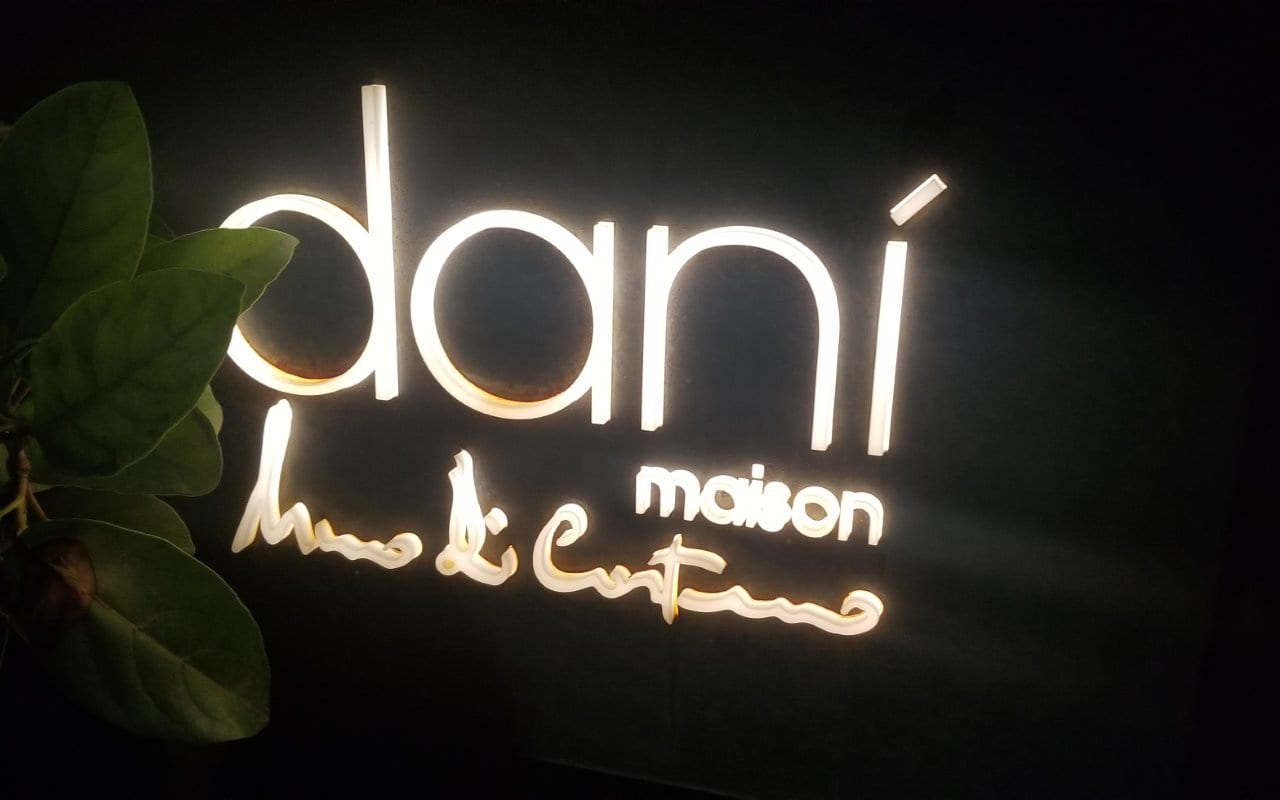 While traveling around Campagna, I headed out to Ischia for a couple days of relaxation. I had heard about the thermal baths and thought that I would just lay low for a couple days. But while at dinner at the one star Michelin restaurant Il Buco in Sorrento, Chef Beppe Aversa told me I must check out Daní Maison. Of course, when I heard it was a two Michelin star restaurant, I figured the chance of me getting in only two days later was more than unlikely.

However, I was wrong. Perhaps it was because I was looking at a Sunday night, just after the last weekend of summer and most people were starting to head home to get back to work. But I went online while sitting at dinner my first night in Ischia to read a bit more about the restaurant and see if I might find an email to inquire about a last-minute spot. I entered my name and email and said I was looking for one seat the following night. Unexpectedly, and promptly, I received an email confirming a seat! I was excited! I hesitated for a moment, thinking about what the evening might cost me, but then thought, why not? I was on vacation. This might be my only chance. And, if I was able to get a reservation with only one day’s notice, perhaps it was meant to be. 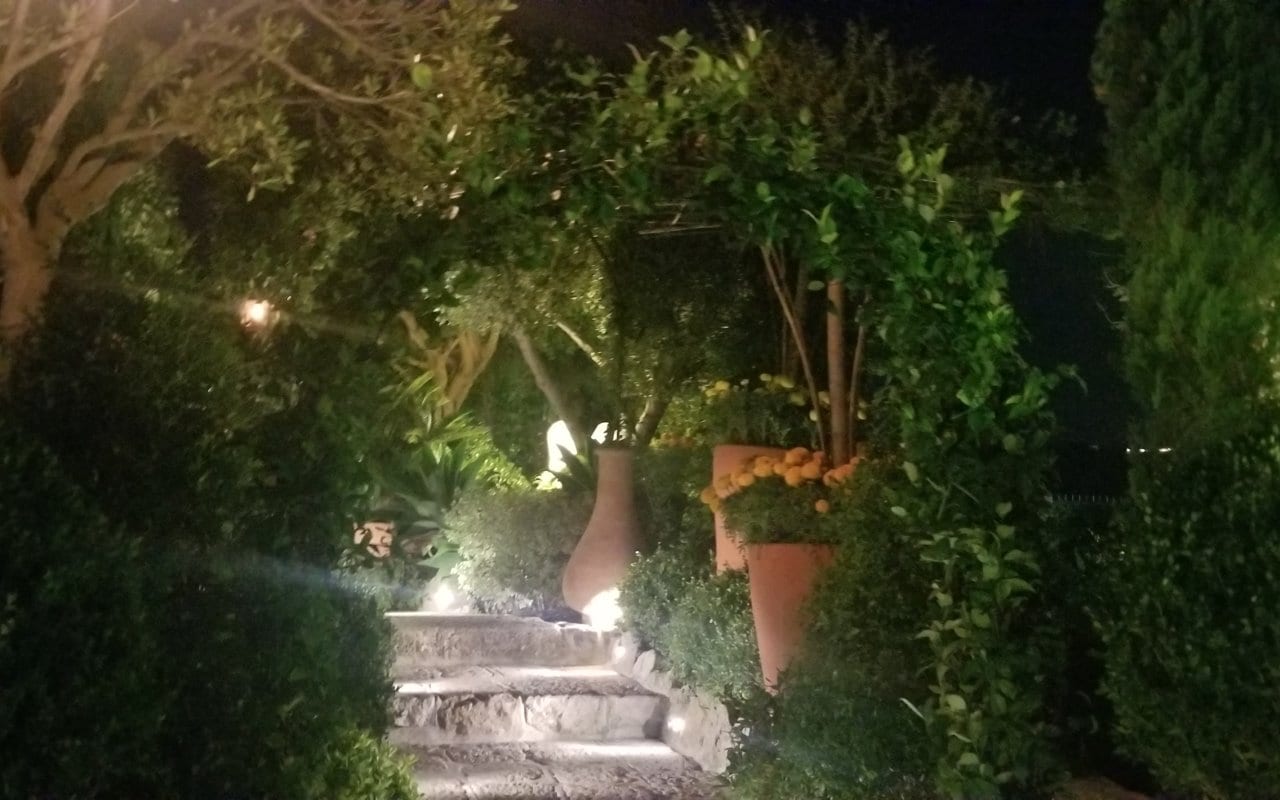 My reservation was for 9pm but they called me and invited me to arrive early to enjoy the garden. The taxi dropped me off at what was a residential area and I was greeted at the gate. I was escorted through a beautiful Mediterranean garden where there were sculptures as well as fresh herbs and spices that the chef uses. My guide explained to me that the space was the former home of Chef Nino Di Constanzo’s mother. Chef Nino has transformed the entire space with care and detail in every element. 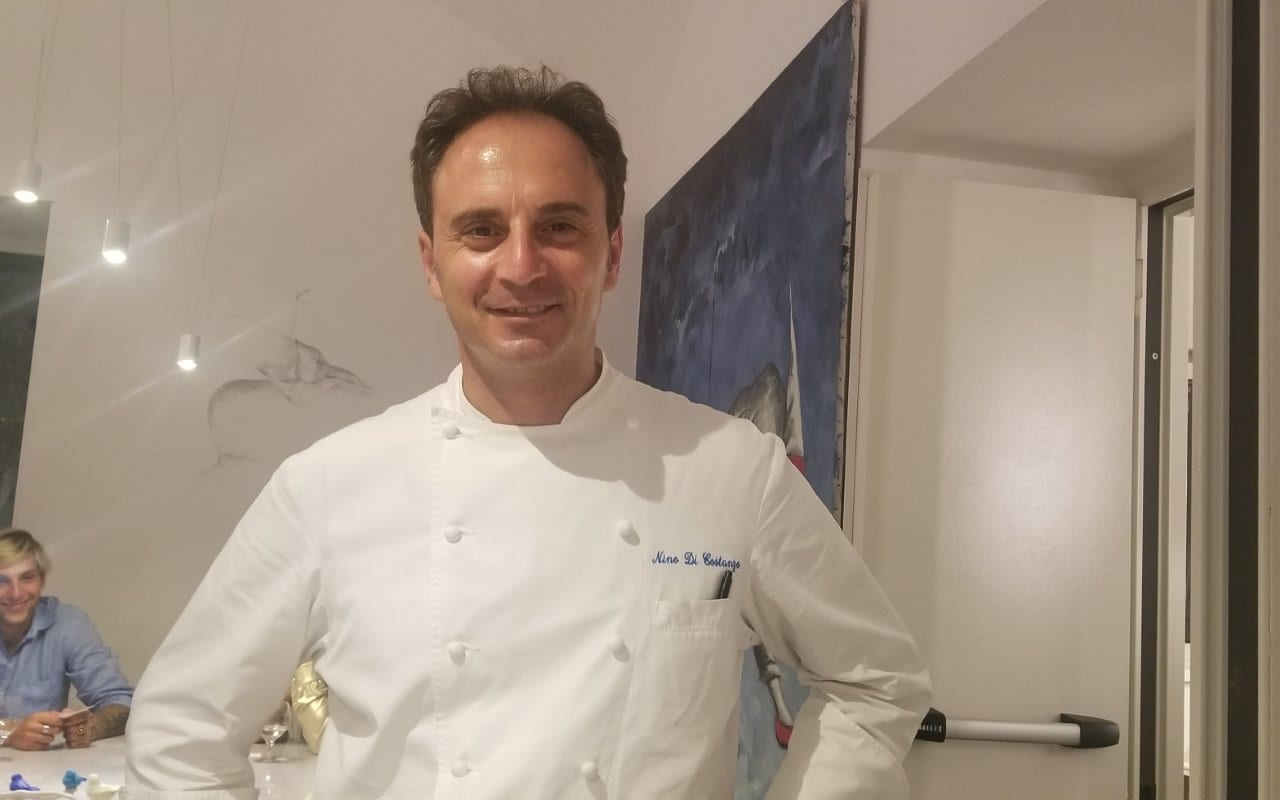 The garden has six tables tucked within the greenery and I was seated at one of them. 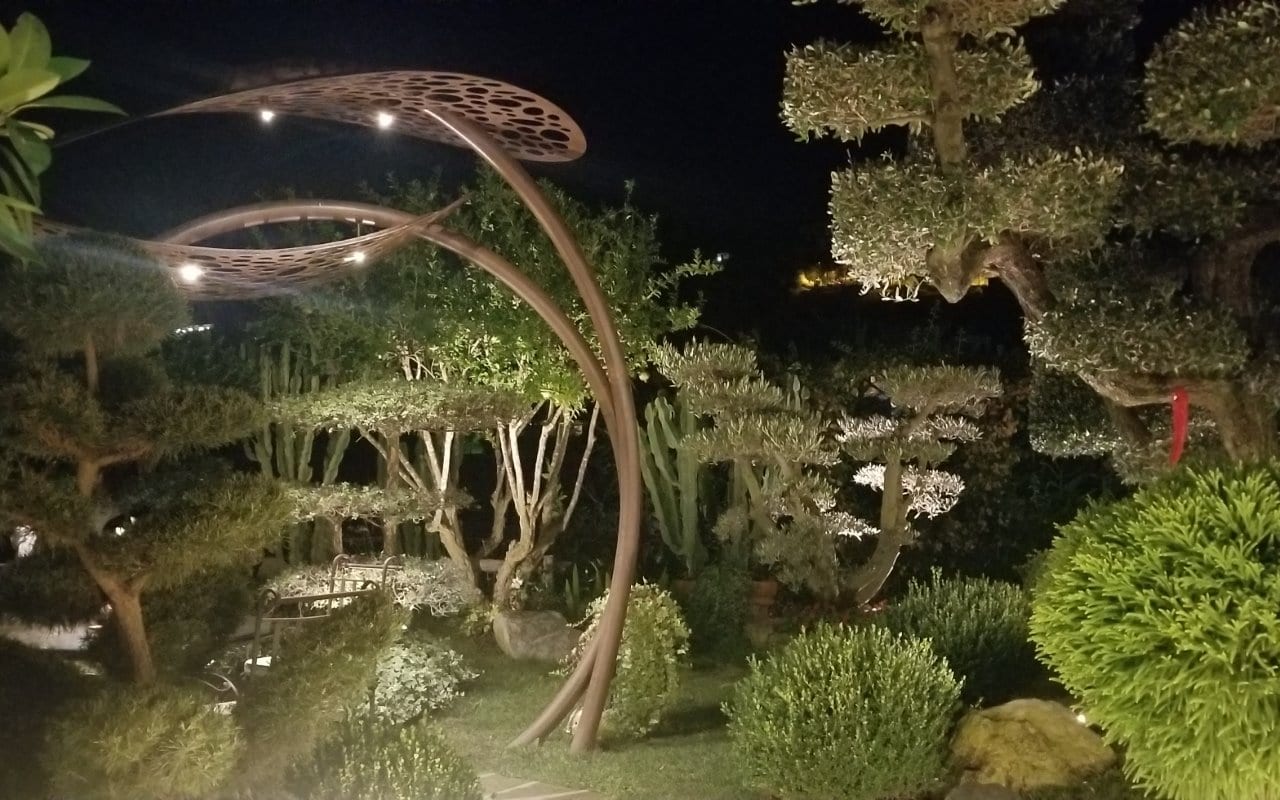 Sommelier Pietro Amato came to my table, asking if I wanted to start with a glass of wine or a cocktail. I selected a glass of would like a glass of Pol Roger Reserve Champagne. 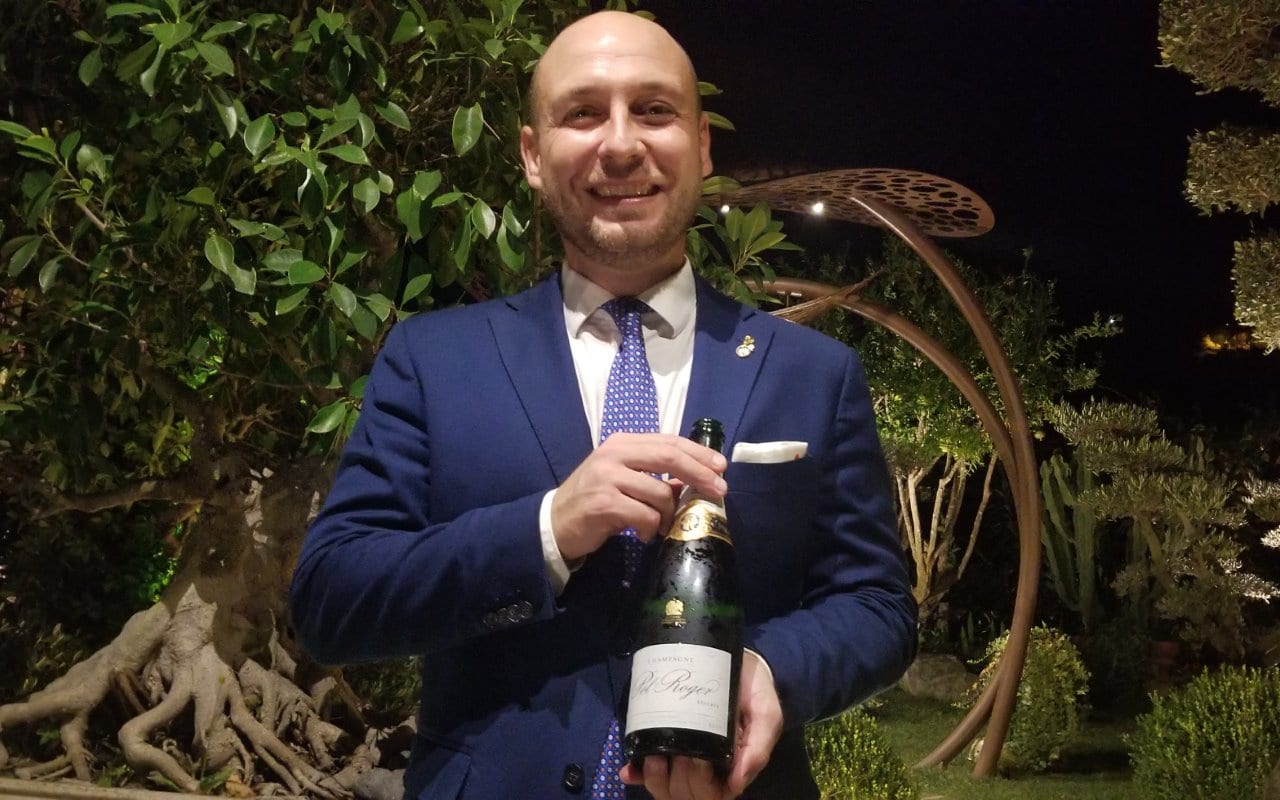 As I was enjoying the warm air, my experience had begun. I was presented my Aperitivi, a silver base with 12 small silver plates attached to long stems. On each silver plate was a little bite. There was a filo cone filled with bufala mozzarella and rapa rossa (beetroot), a basil sponge with Russian Salad, a mini fried calzone with friarielli and provola (cheese), an olive on a parmesan crisp, a zeppolina fritta with soy mayonnaise, a vegetable tartlet, a merenda (snack) Napoletana, bufala ricotta and salami, caramella (candy) of bread, spinach and ricotta. 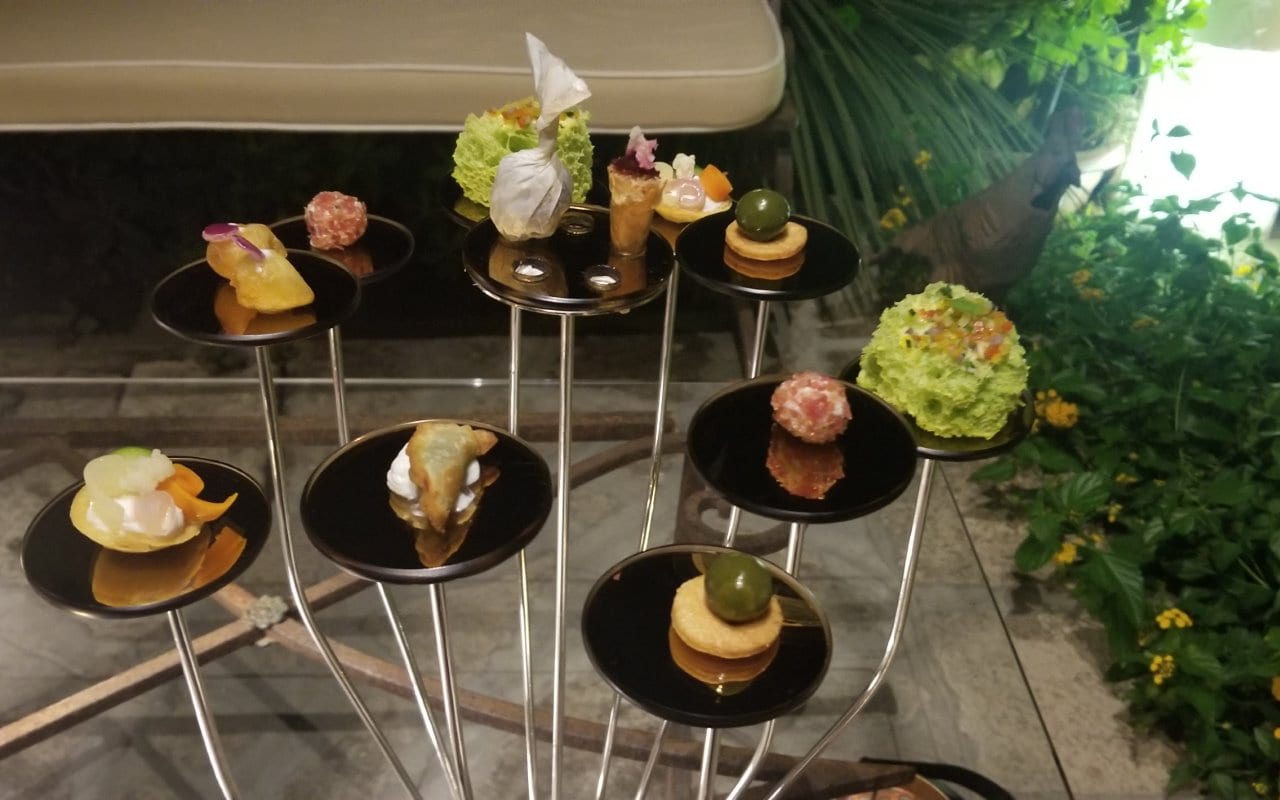 I was then presented with a box with large cards with images of jesters from a local Neapolitan artist and on the back were the menu options. There were a selection of tasting menus and the a la carte menu. I selected the Chef’s Tasting Menu, deciding to leave it to the chef. 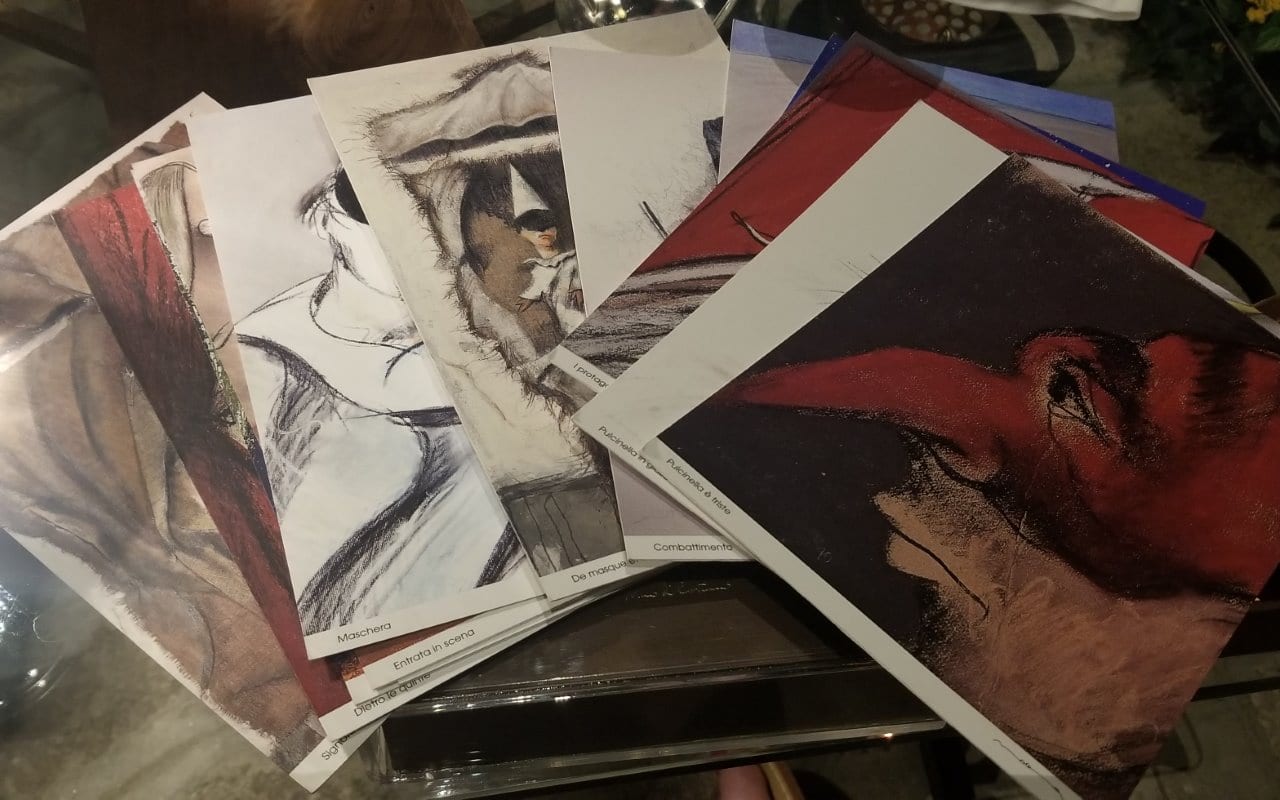 I then proceeded into the restaurant, which is the former home of chef’s mother. Converted into a restaurant, there are only six tables, four in the dining room and two in the kitchen. The dining room is spacious with white walls and large brown square tiles on the floor. Colorful artwork adorns the walls and sculptures of birds sit on each table. Birds are a symbol of home and hospitality and that is what Daní Maison embodies. 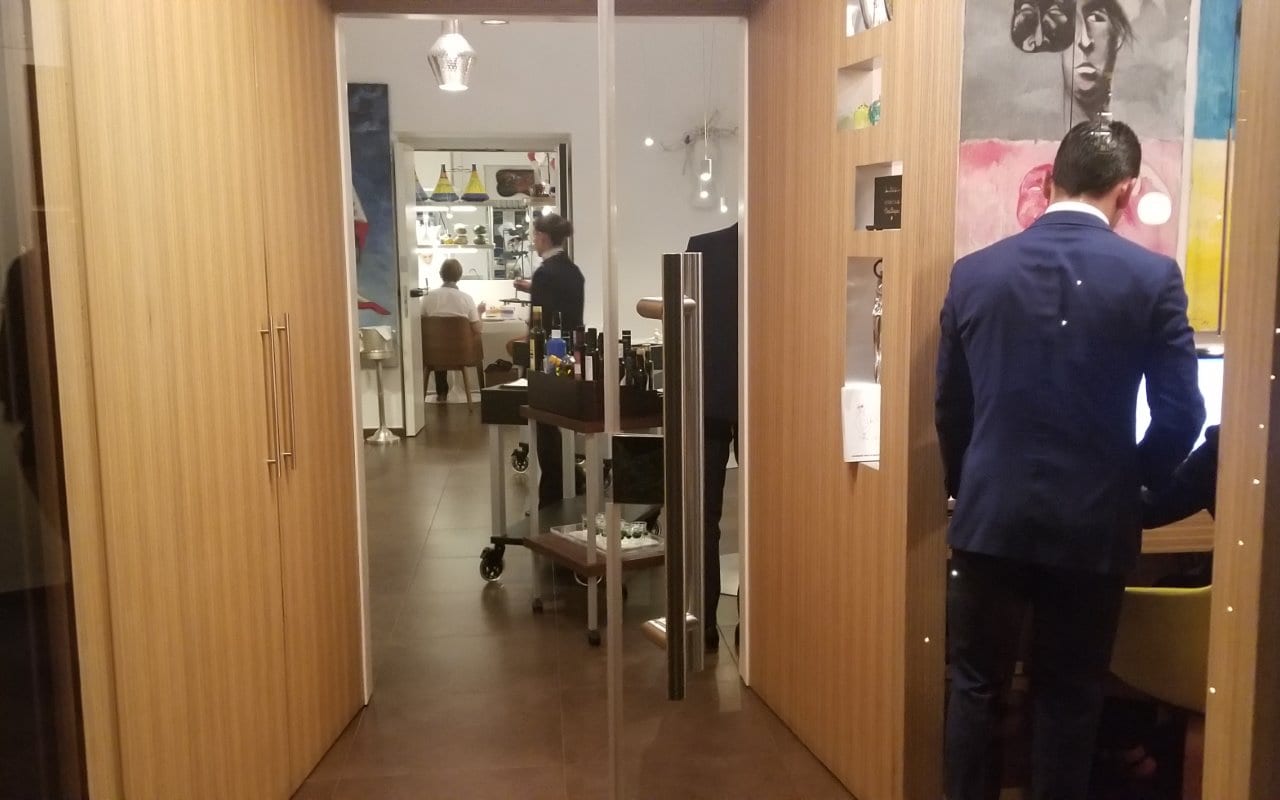 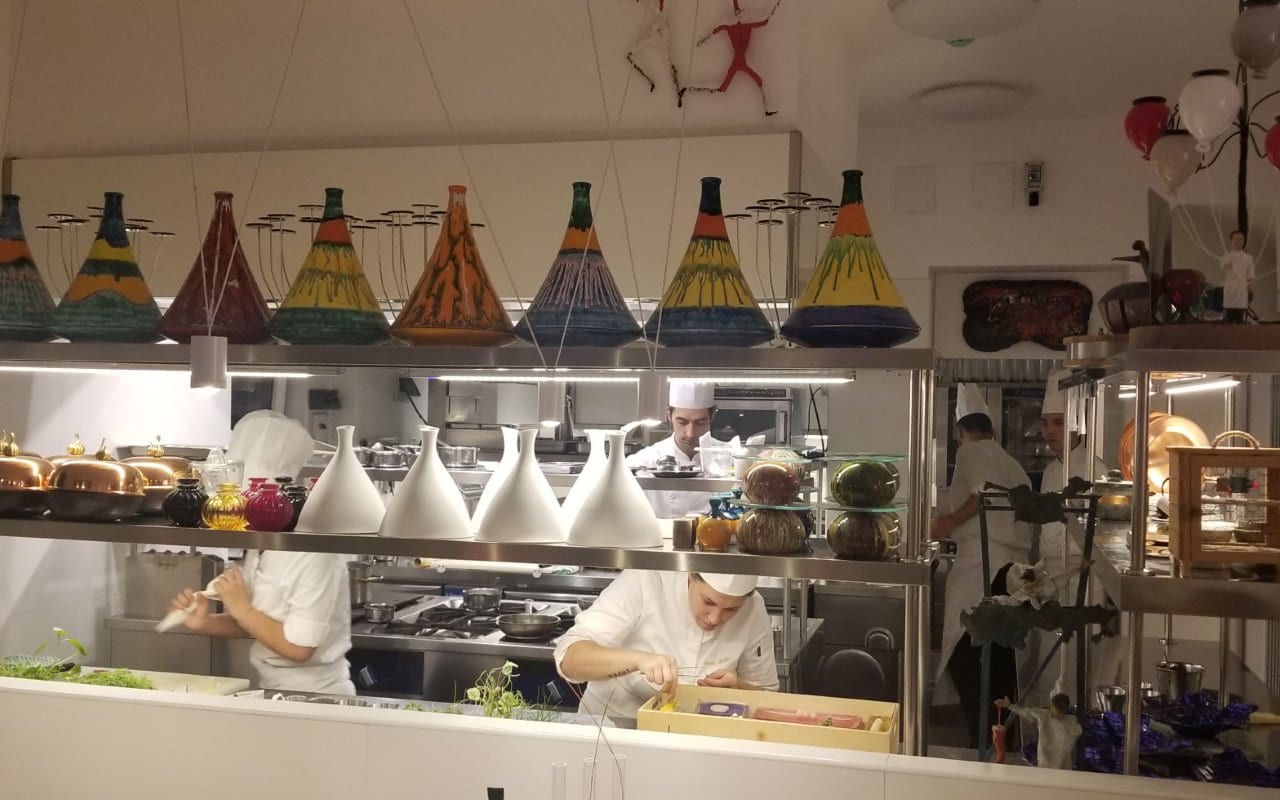 The dining room has four large round white marble tables and I took a seat at one of them. In addition to the Chef’s Choice menu, I selected the wine pairing to enjoy with it. 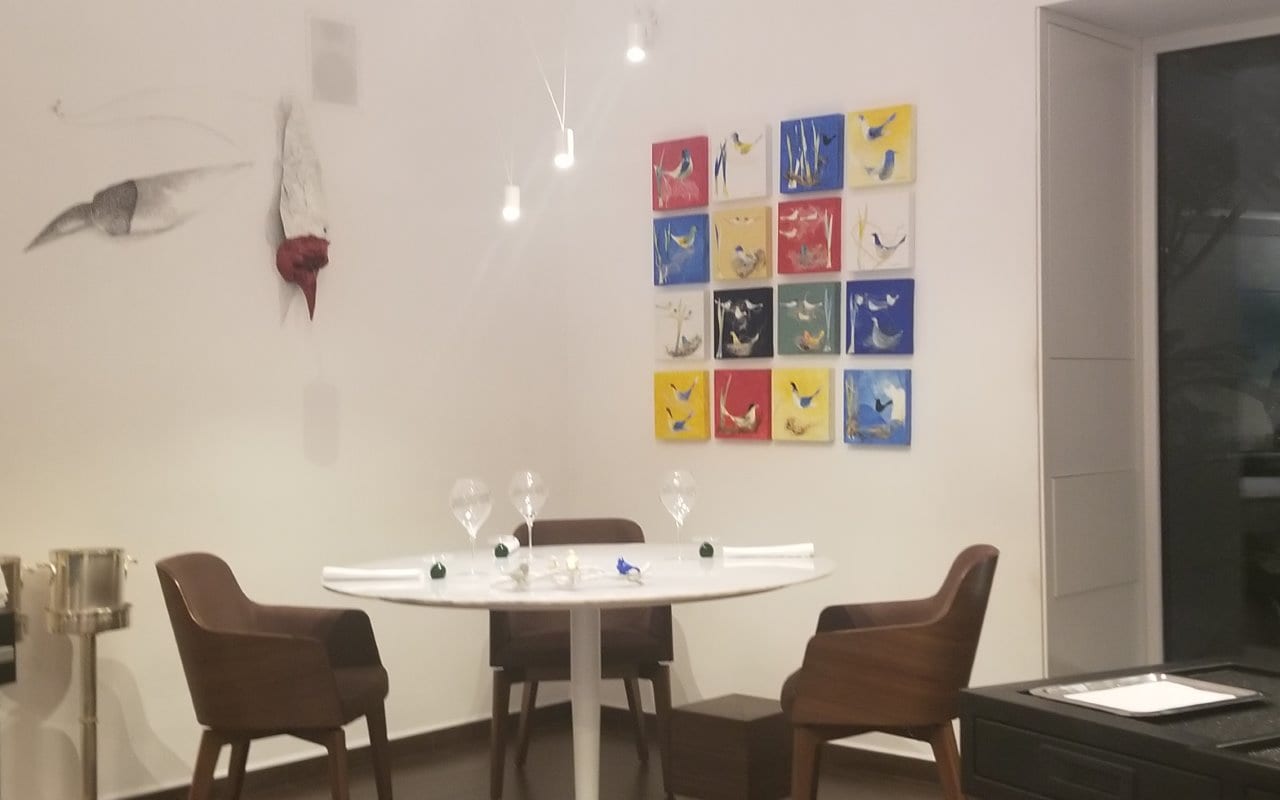 I was then presented with a water menu and could selected bottled water from different regions of Italy and France. I selected the Lauretana Naturale from Piemonte. 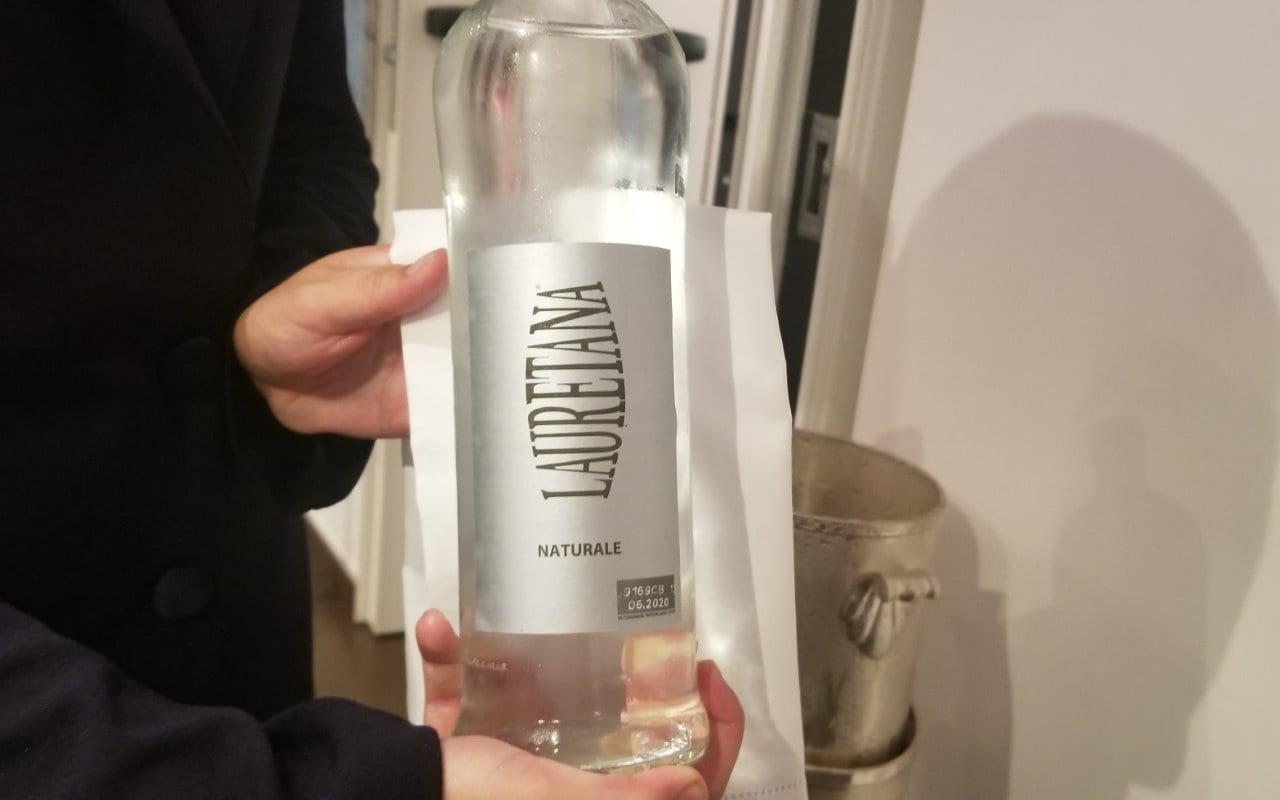 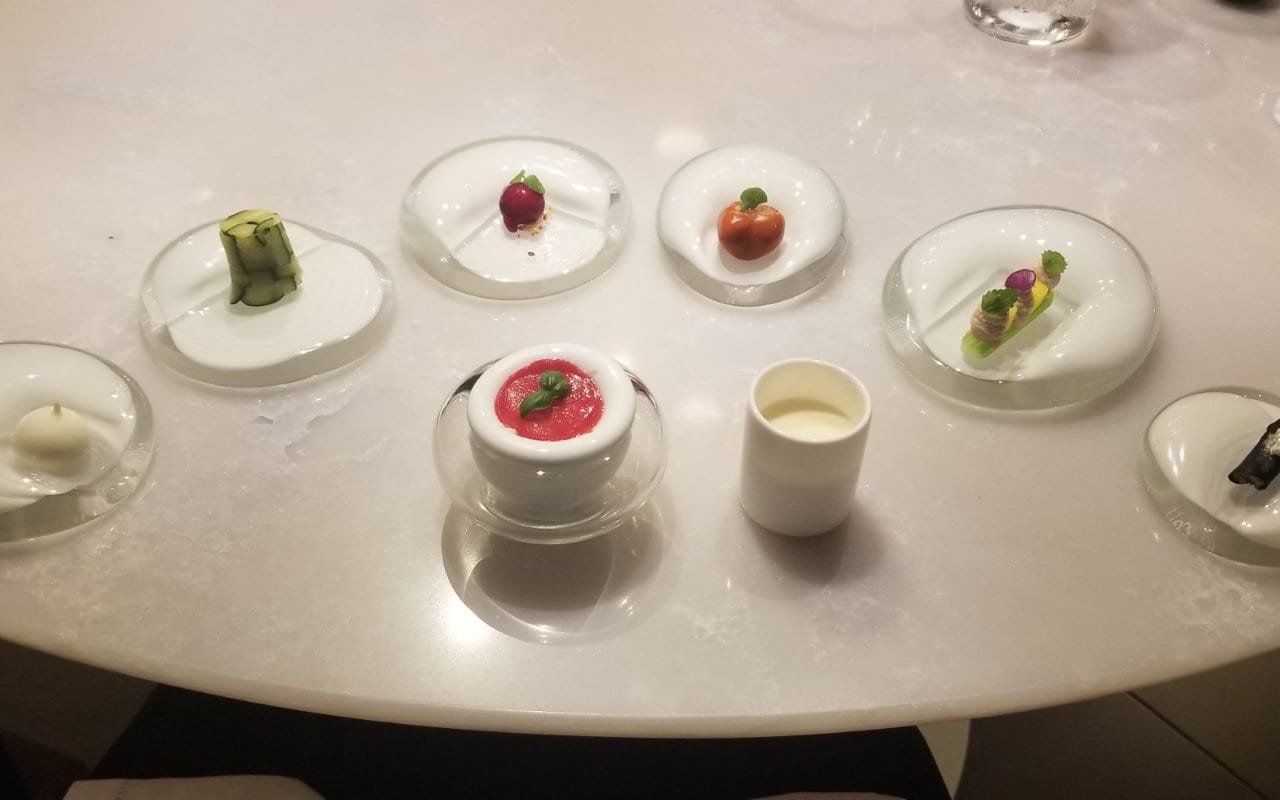 And with the Passeggiata Napoletana was an offering of unique utensils to eat each delicate dish. 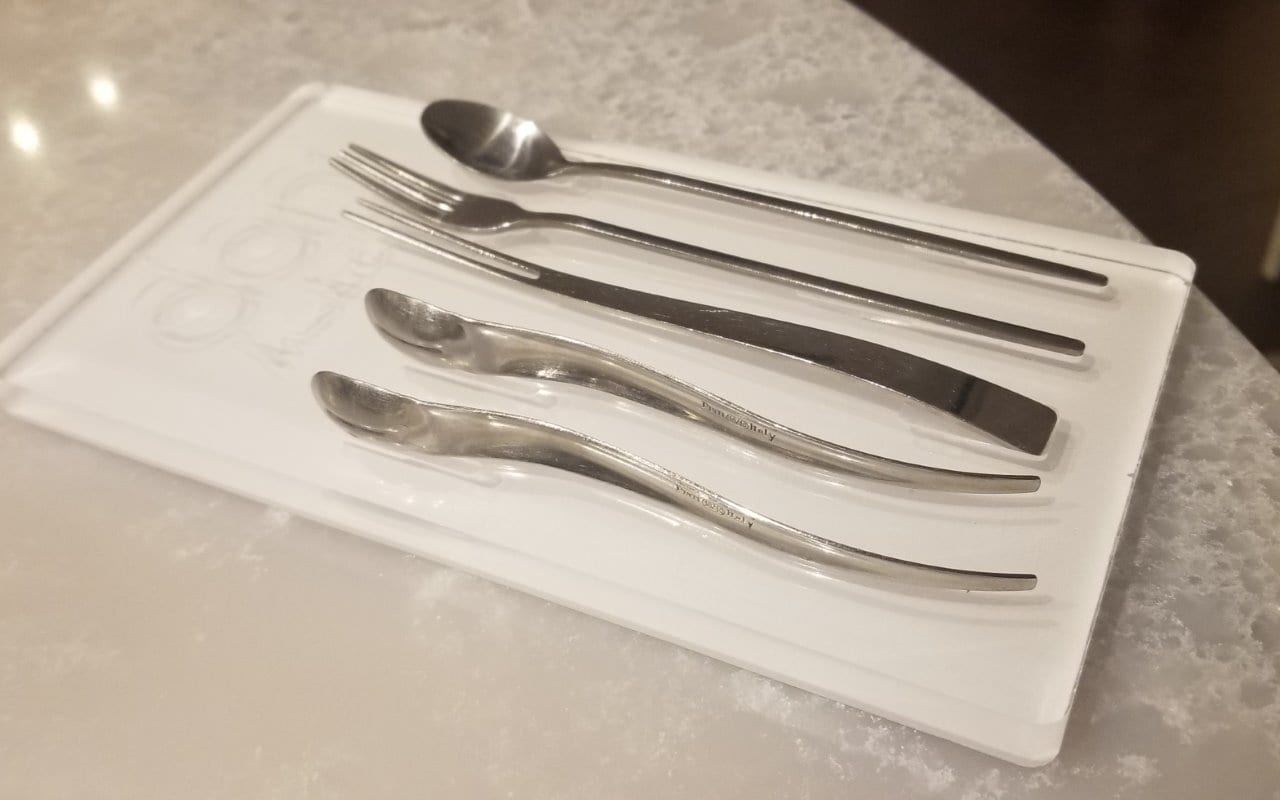 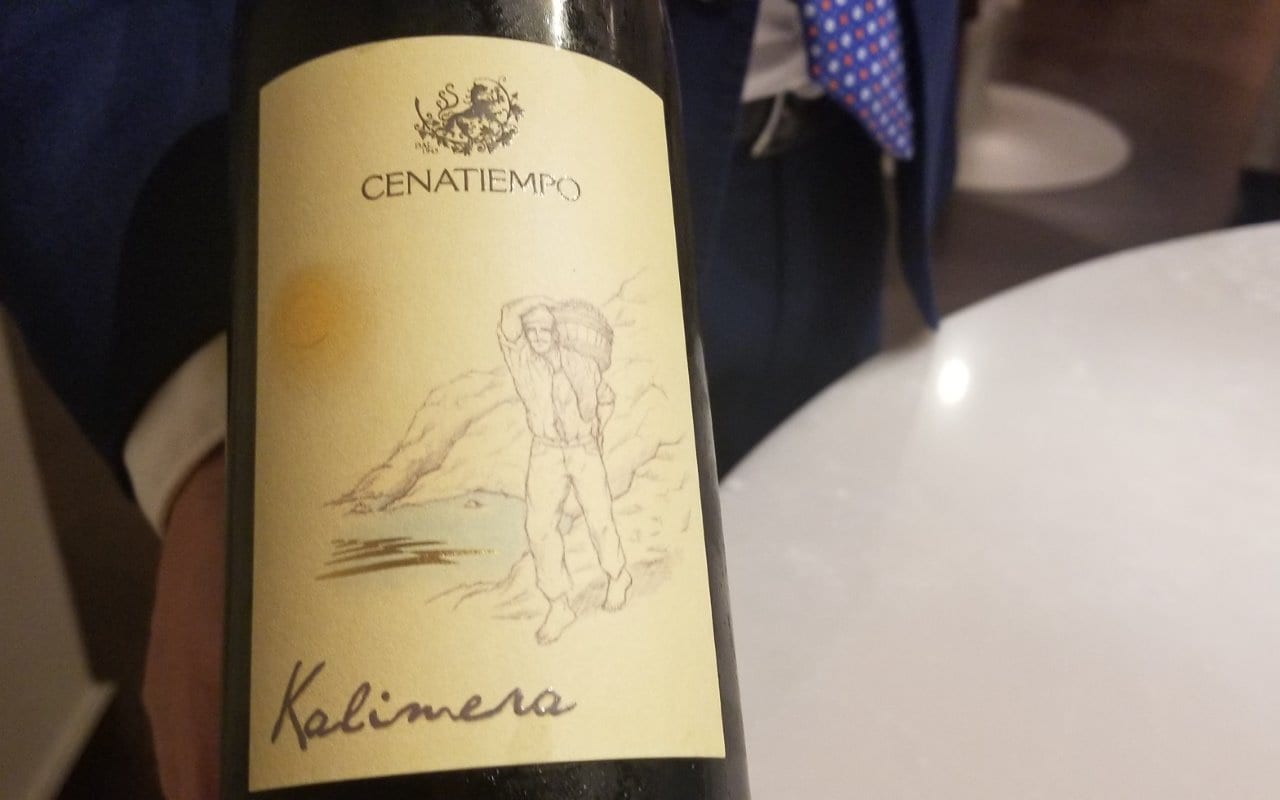 A cart with more than a dozen bottles of olive oils was wheeled up to my table. I selected one to try. 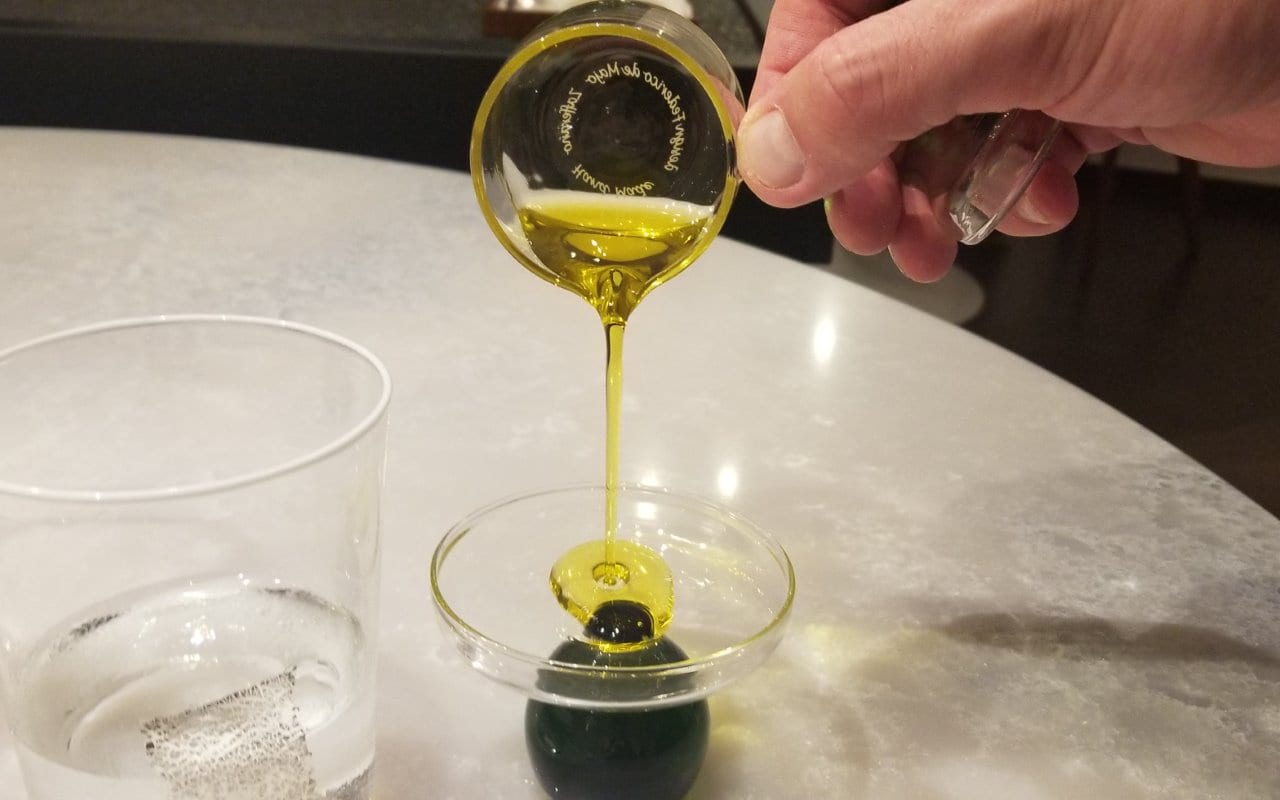 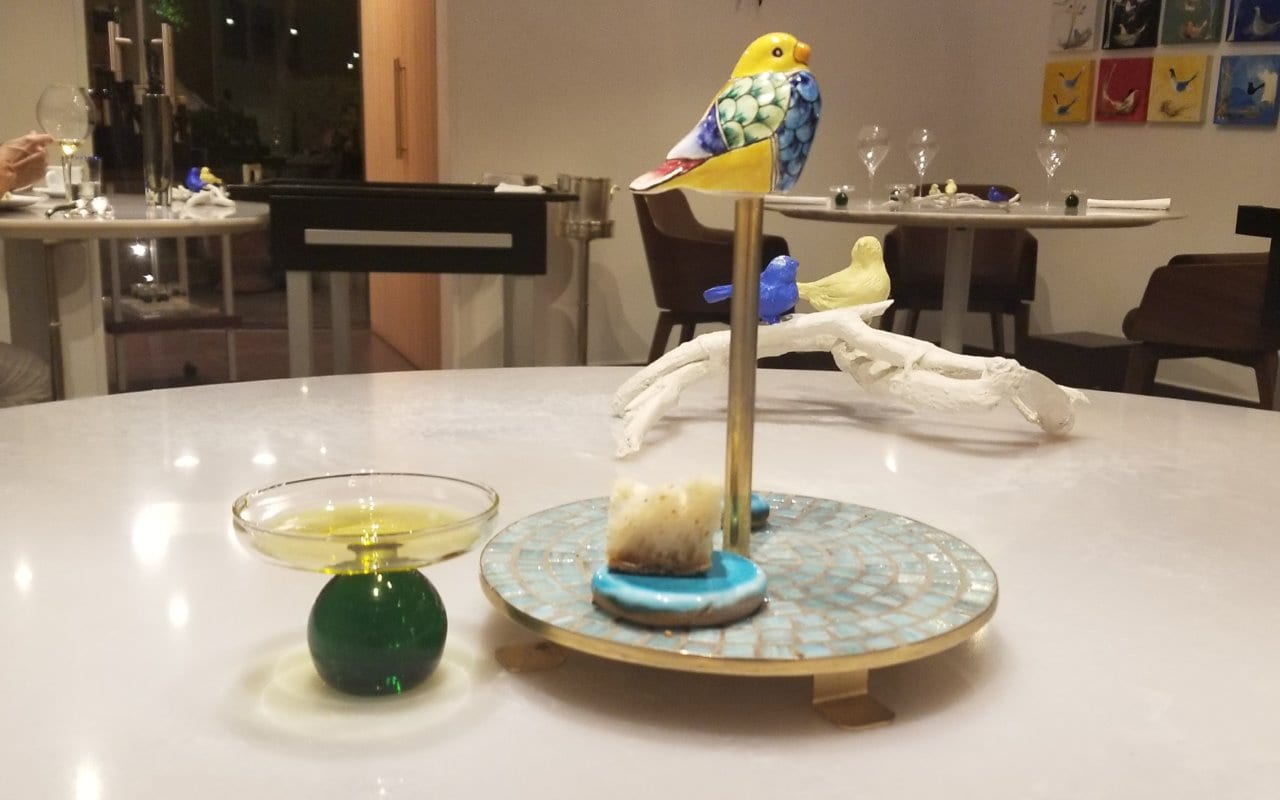 And then there was the bread stick presentation, each served in a vase, looking like a flower arrangement. Each thin stick was a different flavor, including carrot, rosemary, cinnamon, saffron and squid ink. 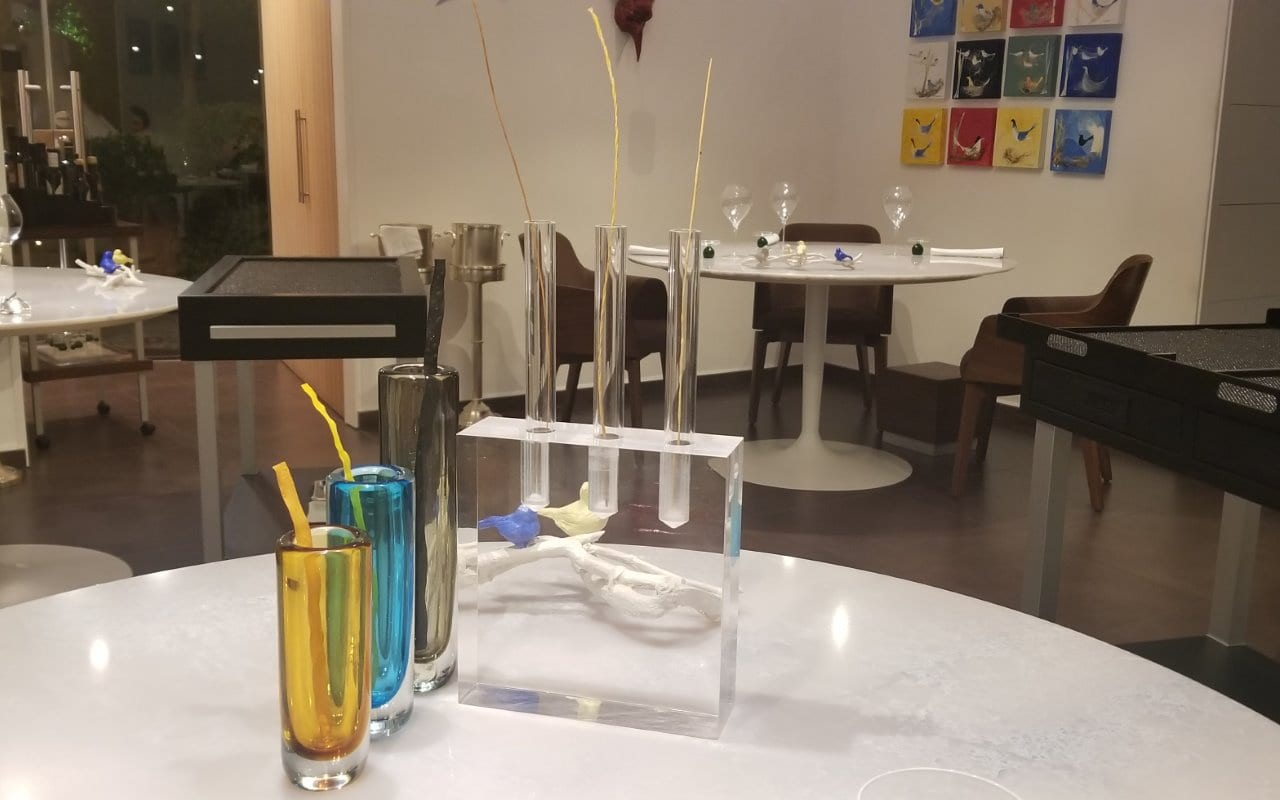 There are large carts on wheels that the staff move around the room with ease. One cart was placed in front of my table with large colorful glass bricks for the Gran Cru…do course. They were placed in front of me. On top of each glass brick was raw fish – scampo con mela verde, yogurt e lime (lobster with green apple, yogurt and lime); gamberi rossi con cremoso di bufala e mandarino (red shrimp with buffalo and mandarin cream) , gamberi rosa con brunoise di verdure e zenzero (red shrimp with vegetable brunoise and ginger); mazzancolla alla puttanesca (spicy prawn); palamita in Caesar salad (Bonito with Cesar salad); sepia all’arancia (squid with orange). As I would eat the food on one brick, the staff would clear it and the remaining bricks would be re-shifted, like a game of tetris. 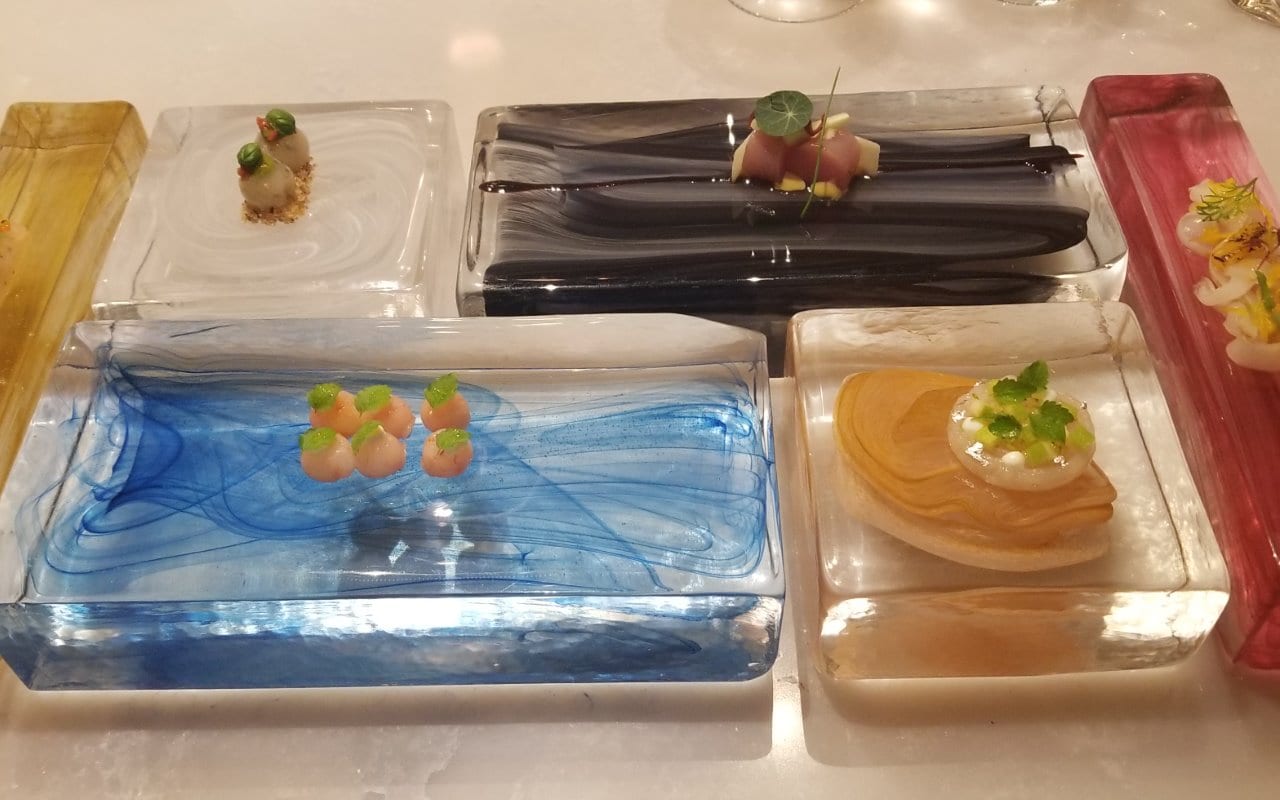 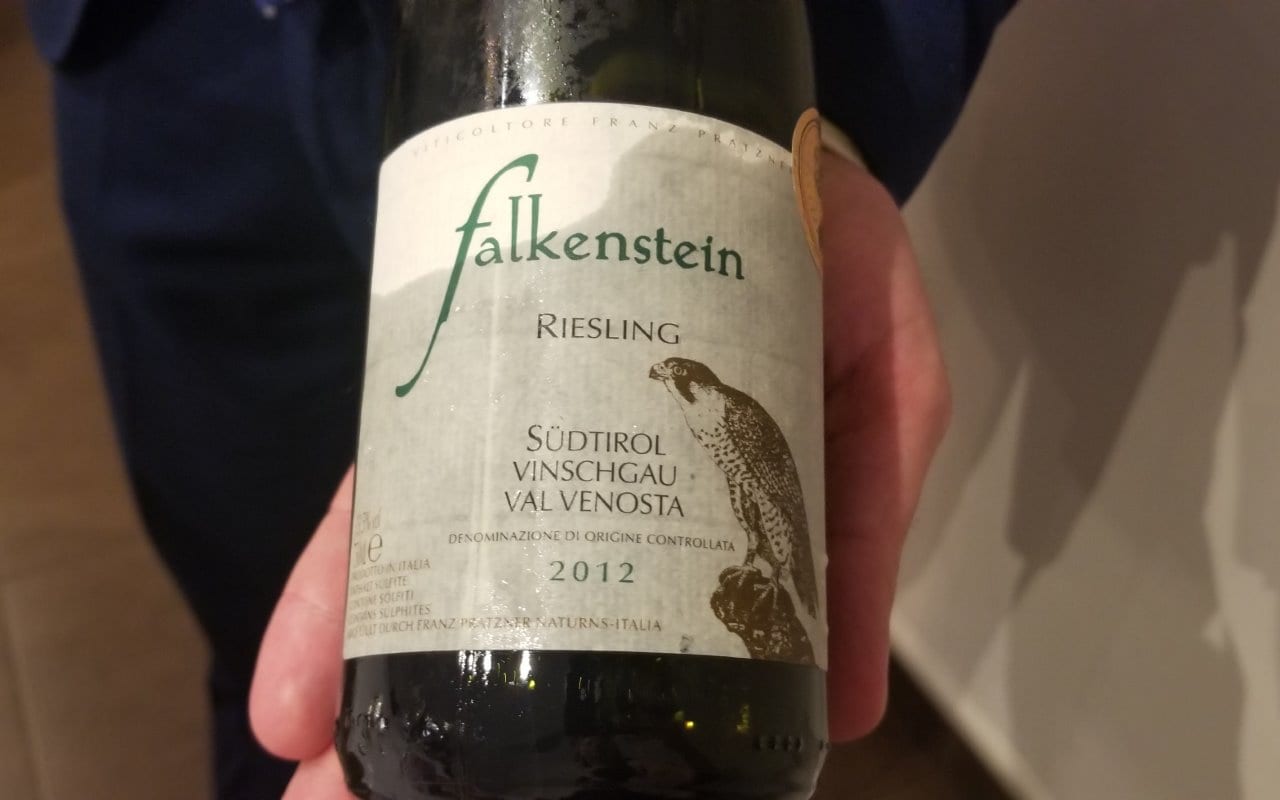 I was then presented with more bread. 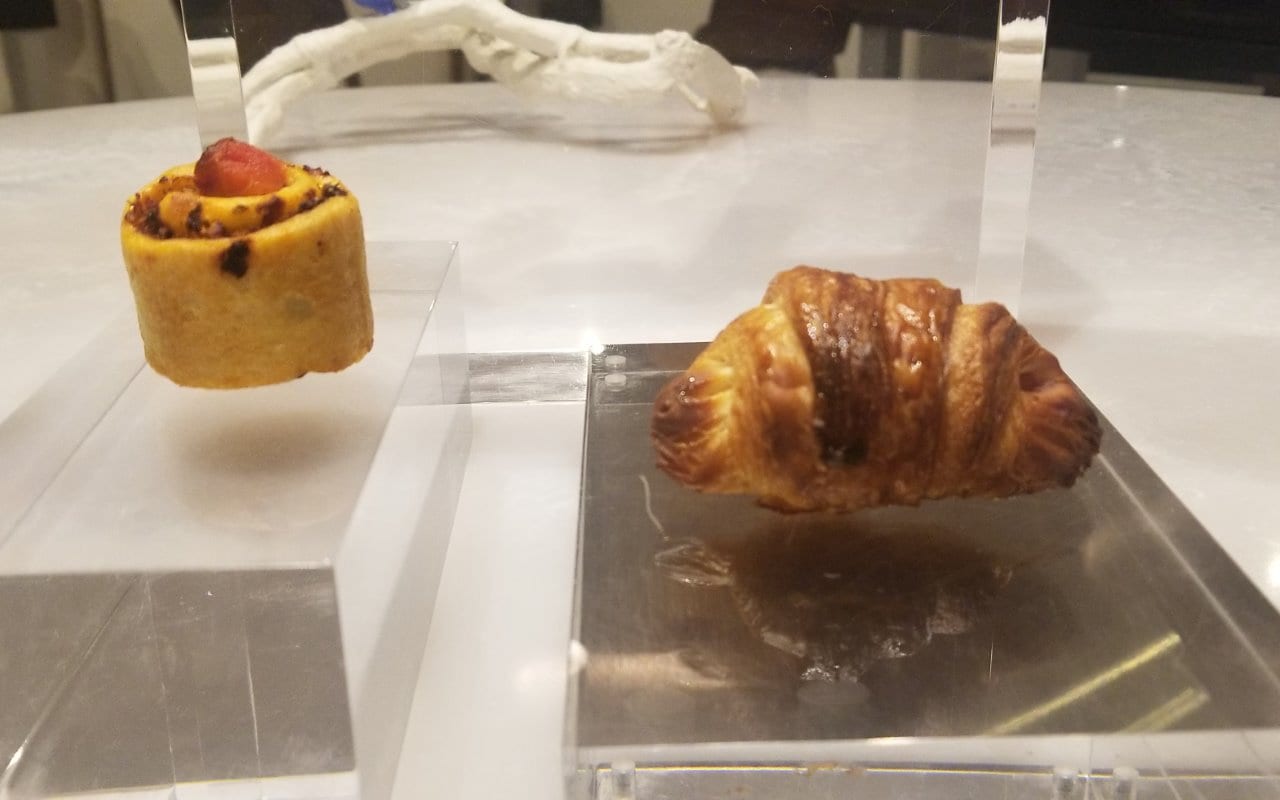