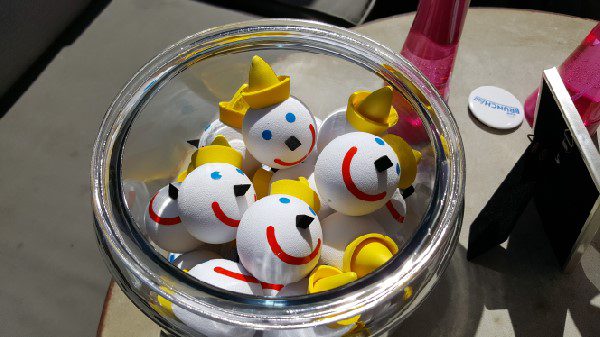 Posted at 10:50h in Food by Allison Levine
0 Likes
Share

Recently I received an invitation to a VIP Jack in the Box event in Los Angeles and I was intrigued. I do not eat fast food, except maybe on a very, very rare occasion. But, I do watch a lot of television and am quite familiar with the entertaining Jack in the Box commercials.

For those not familiar, Jack Box is the founder, CEO, ad spokesman and mascot for the Jack in the Box chain. He is a typical man but his head is round and white with blue dot eyes, a pointy nose and a linear smile. He wears a business suit and a yellow clown cap. Jack has been the mascot since 1994 and for more than a decade, we have met his family members, some who have human heads and others with egg-shaped heads. We even saw Jack get hit by a bus and end up in a hospital. And, in 1998, Jack met his wife Cricket at a “Meat Riot” concert and they have a young son, Jack Jr. The commercials are really quite funny and tell a contiguous story.

The VIP event I was invited to was to introduce some new menu items but that was all I knew. I was a little nervous that it was going to be something secret and sneaky, like what McDonald’s did a few months ago when they had Chef Neal Fraser prepare a five-course meal featuring a secret ingredient (McDonald’s ingredients) to an unsuspecting group of 40 food bloggers.

The event was on the trendy rooftop deck of E.P. + L.P. in West Hollywood. We walked in and were greeted with iced coffee and orange juice (and cocktail versions of both) and displays of the new Brunchfast menu items. Jack in the Box has always been an innovative company. Founded in 1951, Jack in the Box was the first to develop the drive-through concept, as well as the first to add breakfast sandwiches, salads and more. The newest addition to the menu is Brunchfast, their own trademarked version of all-day breakfast. So, whether you want a bacon, fried egg and chicken sandwich, a “Brunch Burger (fried egg, cheese and bacon in a croissant), a “Southwest Scrambler Plate” (a deconstructed Denver omelette with home fries), mini-pancakes or orange-cranberry muffins, you can now order any of these items any day of the week and at any time of the day.

And then came the surprise. Jack and Cricket came out and Cricket is pregnant. It was her pregnancy cravings that were the impetus behind the new Brunchfast menu. And so, after tasting a few items, which were actually quite fresh a tasty, I had my “LA Moment” and took a photo with the television commercial celebrities.

brunchfast, Jack and Cricket Box, Jack in the Box

Sitting in a strip mall with neighbors such as Mediterranean Bar and Grill, California Pizza Kitchen, Massage Envy, Gymboree, Coffee…

It has been almost a year since Roku opened on the Sunset Strip. The 8,000 square-foot modern restaurant with black-and-white…

This story originally appeared in California Winery Advisor. Carneros sits at the base of both Napa and Sonoma. In fact,…