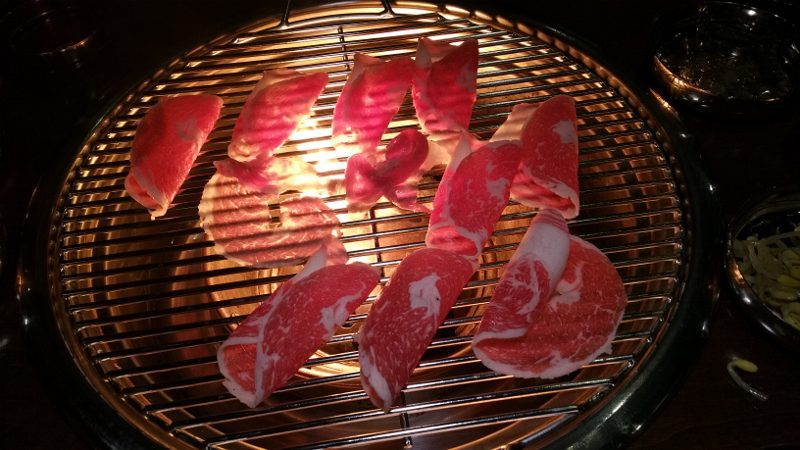 25 Mar Breaking Down A Trend: Cook It Yourself Restaurants

Once upon a time, eating outside of the home in a restaurant on the weekends was a special occasion. After a week of preparing your own meals, there was something exciting about going out for a good dinner prepared and served by someone else. As the food scene has evolved, eating out is now a daily occurrence for many. Why cook your own meal at home where you have to prep and clean up, when you can go to a restaurant, sit back and relax while being served? If this is the benefit of dining out, why is it a common trend to cook your own food in a restaurant?

From Korean BBQ and shabu shabu to hot pots and fondue, it is as popular as ever to go to a restaurant where the servers bring you the ingredients to cook your own food. It seems we have come full circle. Now we are paying others so that we can “cook our own meal.”

Cook-it-yourself restaurants are not passive experiences; they’re interactive and communal. For many, the social aspect is the appeal. Groups of friends sit around a hot pot or a grill in the middle of the table as they drink, eat and chat. Diners select pieces of prepared raw food on platters around the table and then wait for them to cook. This enables the diner to cook the meats exactly as they want it.

As for the restaurant, “cook-it-yourself” has some benefits as well. The biggest benefit is in overhead costs. While the restaurant can focus on quality of the products served, they can minimize the number of people needed in the kitchen and on the floor. Service will vary from restaurant to restaurant and from style to style. While there is generally a more hands-off approach in these “cook-it-yourself” restaurants, there are servers are on the floor to help you. For example, in Korean barbecue, servers will regularly check on the table to adjust the temperature of the grill and assist with cooking the meat. At hot pot and shabu shabu restaurants, servers will continue to fill up the pots with more broth which tends to cook down over time.

Fondue is a traditional dish originating from Switzerland, Italy and France. A dish of melted cheese is served in a communal pot, heated with a candle. Using long-stemmed forks, bread is dipped into the melted cheese. Over the years, fondue has evolved beyond cheese to also offer fondue bourguignonne, where meat is cooked in hot oil as well as chocolate fondue. Fondue was at the height of popularity in the United States in the 1950s-1970s. While a few restaurants around the city offer chocolate fondue as a dessert option, The Melting Pot has been serving cheese, meat and chocolate fondue for more than 40 years at more than 125 locations around the world. While fun for a group of people, fondue is often times seen as a romantic meal for two people to share.

Korean barbecue is the method of roasting thin slices of meats and vegetables on a gas or charcoal grill built into the center of the table. Served with a selection of banchan (side dishes), the meat is brought to the table and either the servers or the diners will place the meat on the grill. As the meat cooks, it is up to the diner to rotate the meat and remove it when it has been cooked to each individual’s liking.

Chinese hot pot, originating in Mongolia, has a more than 1,000-year history. A basic stock is made using water, salt and a soup base, and a large selection of meats, proteins, vegetables and noodles are available to choose. Typically, the broth is fragrant and mild but will vary depending on the region in China. At Chengdu Pot in the San Gabriel Valley, the mild broth is available but there is also Szechuan style which is spicy. The pot has a division down the center, allowing two types of broth at once. Diners place their choice of vegetables and meats in the broth and wait for them to cook. They are then fished out of the soup using a ladle or a slotted spoon and dipped into a preferred sauce. The broth can also be ladled into a bowl and drunk.

Shabu shabu is the Japanese form of hot pot. The meat and vegetables are dipped into hot water or a broth made with kelp. Unlike Chinese hot pot, in which you leave the meat in the pot to cook, with shabu shabu, when the thin slice of meat or vegetable is placed in the broth, the diner is to swish it back and forth a few times. This is where the name shabu shabu comes from as it means “swish swish.” At Osawa in Pasadena, the shabu shabu counter is a popular spot in this restaurant that also serves otsumami (Japanese snack), sushi, sukiyahi and udon. Offering tonkotsu silver pork, rib eye, prime rib eye and Wagyu beef, the high-grade meat cooks quickly and is best served rare. Osawa also offers king salmon with a spicy miso broth. The cooked meats and vegetables are then dipped in ponzu or sesame seed sauce. At the end of the meal, noodles are added to the leftover broth and it is eaten as soup.

“Cook-It-Yourself” meals in restaurants is a jovial activity that engages the customer. It is casual, and whether in a small group or large group, it is as much fun to cook the food as it is to eat it.

As dining out becomes a daily occurrence, what draws a customer to one restaurant over another? Is it the food,…