This past September, I took a two week trip to Piemonte, Italy. What started as a trip to visit my best friend for belated birthday celebrations turned into a journey through Piemonte, visiting Gavi in Monferrato, Roero, Novello, and the Langhe as I wrote about in Travel Curator and share here.

Truffles, Barolo, Barbaresco, and the Slow Food Movement all come from Piemonte, Italy. With ancient villages and castles perched on hills overlooking vineyards, Lonely Planet crowned Piemonte as the world’s top region to visit. Yet Piemonte is still a relatively undiscovered gem and the best way to experience it is through a curated wine journey as expert wine writer Allison Levine discovered during a recent visit.

Piemonte, which translates to “the foot of the mountains”, sits in Italy’s northwest corner at the foot of the Alps, bordering France and Switzerland. Piemonte, the second largest region in Italy, borders Liguria to the south, Lombardia and Emilia-Romagna to the east, Aosta Valley to the northwest and Switzerland and France to the west. The primary cities of Piemonte include Torino, the capital, as well as Alessandria, Asti, Cuneo, and Alba, each surrounded by wine country. Wine is made all across Italy, but Piemonte is one of the country’s greatest wine regions. Pietmonte only produces around five percent of Italy’s wines, yet it is home to most DOCGs and DOCs (guarantees of quality) in the country, so yep, the wine here is incredible.

Piemonte is famous for Nebbiolo, Barbera, Dolcetto, and Moscato d’Asti, but there are many other indigenous grapes grown in the region. For red wines, there is also Brachetto, Freisa, Grignolino, Pelaverga, Ruche, Albarossa, Uva Rara, Vespolina, and more. For white you have Arneis, Cortese, Erbaluce, Faborita, Timorasso, and Nascetta. There are five zones where wine is produced in Piemonte, but the majority is in the southern part of the region around the towns of Alba, Asti, and Alessandria. My wine journey through Piemonte took me to Monferrato, Roero and the Langhe (which includes Barolo and Barbaresco) where I got to literally taste the natural beauty through the vino.

Monferrato includes the areas around Asti and Alessandria and is where you can find excellent Barbera with wines like Barbera d’Asti, Barbera del Monferrato, and Nizza, a highly regarded subzone of Barbera d’Asti. Other indigenous grapes including Grignolino, Ruché, Arneis, Freisa, and Bonarda are also planted in Monferrato.

While Piemonte is primarily known for its incredible red wines, one sub-region in Monferrato is known for its stunning whites. The Gavi region is in the southeastern part of Piedmont, in the province of Alessandria. Eleven towns form the Gavi appellation. And the wines of Gavi are made from 100 percent Cortese grapes. The Cortese grape produces wines that are crisp and refreshing with lemon, green apples, honeydew, floral, and nutty aromas. Gavi wines are usually drunk while young and fresh but also have the potential to age for a few years. 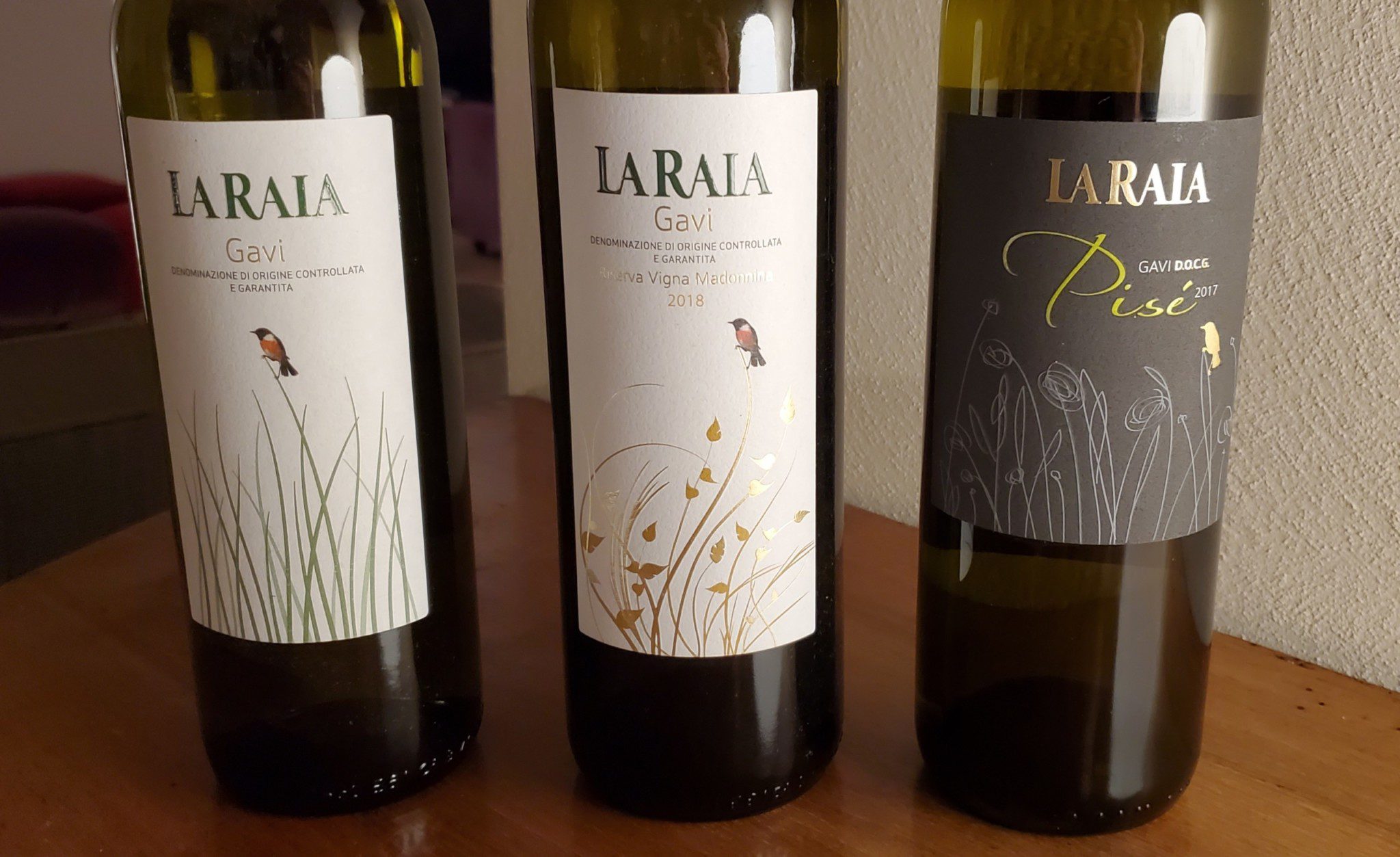 Located in the hills of Gavi, La Raia is a family-owned winery established in 2022 by the Rossi Cairo family. Giorgio Rossi Cairo, a businessman in Milano, purchased the 180-hectare property and today La Raia is a Demeter certified biodynamic farm with 48.5 hectares of grapes planted, 40 of which are planted to Cortese. Giorgio’s son Piero runs the business, which includes the winery, accommodations on the estate, an art foundation, the raising of Fassone cows (a Piemontese breed of cow), and the production of honey, spelt, and rye. La Raia produces three different Gavi wines. The Gavi DOCG is made with all estate fruit and is fresh and bright with a pretty floral and stone fruit nose. The Gavi Riserva Vigna Madonnina is a single vineyard wine that has a rich nose of apple, crisp pear, and lime pith and a more intense mouthfeel. The Pisé is fermented in neutral oak resulting in a rich wine with notes of baked apple spice and lemon.

There is no need to go far as La Raia has two apartments, as well as Locanda La Raia, a twelve-room boutique hotel located in a former mail station on the estate. The rooms blend tradition with modernity and are integrated into the natural landscape. Enjoy breakfast and dinner in the restaurant which serves traditional dishes and relax by the pool, read in the garden, stroll the property in search of artwork, or visit surrounding wineries.

The Roero is north of Alba and separated from the Langhe by the Tanaro River. This hidden gem of a region lies close to Barolo and Barbaresco. It is a hilly region made up of 19 municipalities. There are 147 producers and 86 growers in Roero, which was named a UNESCO heritage cultural site in 2014. While most regions in Piemonte are known for their red wines, and Gavi is known for white, Roero has both a red and a white grape. The two primary grapes of the Roero are Nebbiolo and Arneis and the wines of the Roero are all about elegance.

Azienda Agricola Negro Angelo e Figli
The Negro family has been cultivating vineyards on the Roero Hills for more than three centuries and the Azienda Agricola Negro Angelo e Figli estate’s two most important vineyards, Perdaudin and Prachiosso, were first planted in 1670. Angelo Negro began making Nebbiolo and Barbera in 1946 and his son, and current owner, Giovanni Negro, was the first producer to make a dry Roero Arneis in 1971. Today, the Negro family farms 64 hectares organically and offers an exquisite line up of wines. The Roero Arneis and Nebbiolo are beautifully elegant, and they also make two sparkling wines from Arneis and Nebbiolo. While based in Roero, they also produce Barbera d’Alba, Dolcetto d’Alba, Barolo, Barbaresco and more.

Monchiero Carbone
Fourth-generation Francesco Monchiero’s family has been in Roero for 200 years. Located inCanale, in the center of town, Monchiero Carbone was born through the marriage between Marco Monchiero and Lucia Carbone and the merging of their vineyards. Honoring his parents, Francesco, with his father Marco, started Monchiero Carbone in 1990. Offering a range of wines, standouts include the 2020 Recit Arneis with very pretty aromatics of white peach, white flowers, and grapefruit and the single vineyard 2018 Srü Nebbiolo with aromas of red fruits, licorice, and spice. Monchiero Carbone also produces Favorita, a grape that was almost extinct, which produces a delicate, fresh wine that is light with bright acidity.

Malvira’
Established in the 1950s, Malvira’ was one of the first vineyards in Piemonte to recognize the importance of Arneis. Run today by brothers Massimo and Roberto Damonte and their sons Giacomo and Francesco, Malvira’ is an organic winery with 106 acres of Arneis and Nebbiolo. A visit to the winery can include a tour through the underground cellar, a walk in the vineyard, and a tasting of a selection of wines. Or enjoy the wines paired with food in the restaurant at Villa Tiboldi.

Azienda Agricola Giovanni Almondo
The Almondo family’s history in Roero dates to the fourteenth century. Domenico Almondo graduated with a degree in Agriculture Sciences and returned with a focus on high quality viticulture. He founded the Azienda Agricola Giovanni Almondo winery in 1978 and named it after his father Giovanni. The family has 57 acres planted in Montá in the southern part of Roero where the clay soils produce bigger style wines, and a vineyard in the northern part of Roero where the soils are sandy, as well as less than 10 acres in the north where the sandy soils result in pretty, elegant style wines. 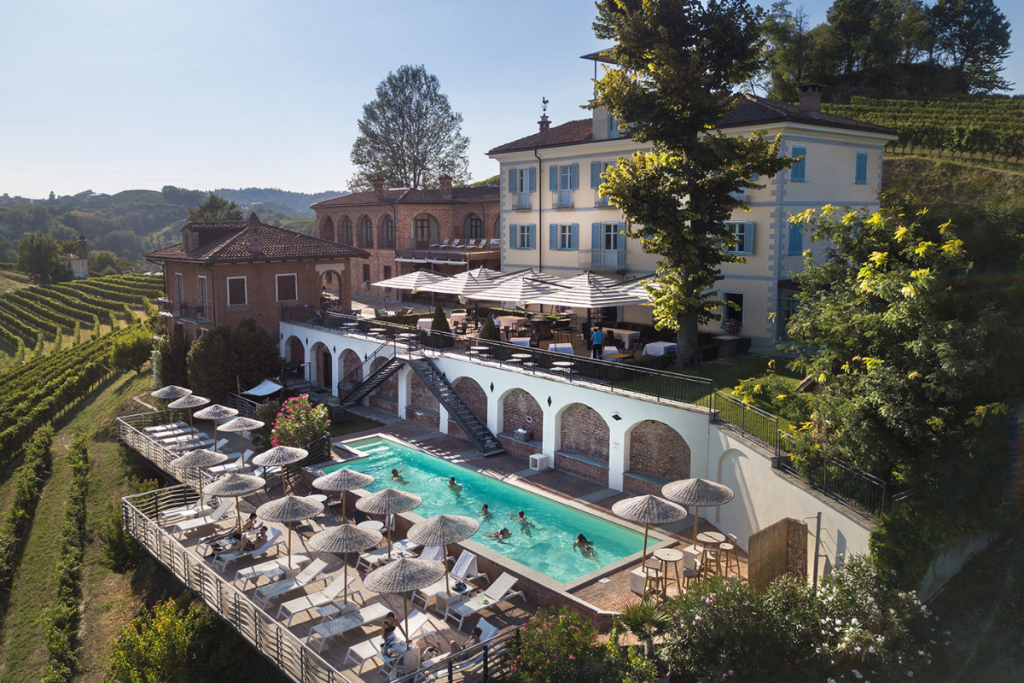 Villa Tiboldi is an elegant ten room hotel overlooking the vineyards of Roero. Formerly an 18th century farmhouse, then the 20th century vacation home of a wealthy Genoese family, the Damonte’s of Malvira’ renovated the abandoned property in 2003. Located next door to Malvira’, the hotel also has an elegant and delicious restaurant, a swimming pool, and gardens.

The Langhe is the hill country around the city of Alba. Both Barolo and Barbaresco regions, synonymous with Piemonte, are in the Langhe. And what Barolo, Barbaresco, and the Langhe, are most famous for is Nebbiolo, the king of the grapes. Barolo, in the Province of Cuneo, is made up of eleven communes and one of the communes is Novello. Novello is a quiet little hill-top village in the southwest of Barolo. Less touristy than its neighbors La Morra and Barolo, the town has an authenticity to it. And, while Nebbiolo reigns here, another grape is also cherished. Novello is home to the indigenous white grape Nas-Cetta, the only white grape native to the Langhe. While once almost extinct, Nas-Cetta was classified as a DOCG wine in 2010 and is championed by the producers in Novello.

Elvio Cogno
Elvio Cogno was a restaurateur in La Morra when he started making wine for the restaurant. In the 1960s he left the restaurant business to produce wine full time. And, in 1990, at the age of 60, he bought property in Ravera, a single vineyard in Novello, where the winery is based today. Today the winery is run by his son-in-law Valter Fissore and his wife Nadia. A visit to Elvio Cogno will take you to the top of the Ravera Cru where you can taste through an exceptional selection of Barolos, as well as Barbera and Dolcetto. But do not miss tasting the Nascetta that Valter and Elvio spent 25 years saving from extinction.

Azienda Agricola La Strette
Winemaker brothers Mauro and Savio Daniele bought the La Strette property and began restoring it in 1993 into <a href="https://lestret