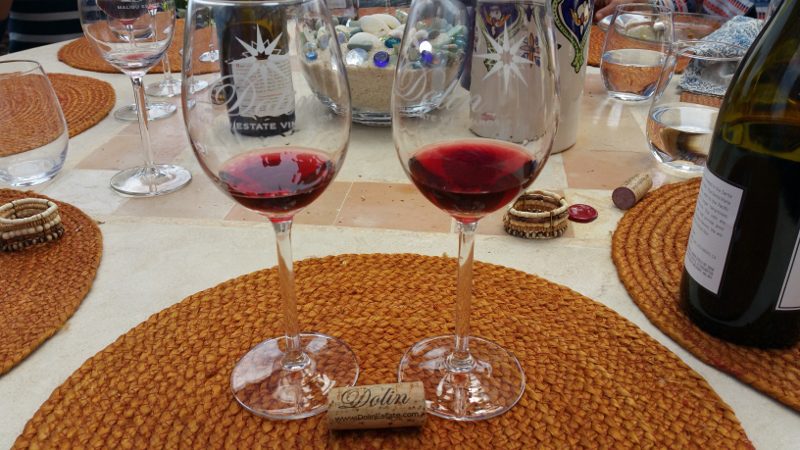 Last summer, I went up to Malibu to visit Elliott Dolin at Dolin Malibu Estate and learn about his wines just after the Malibu Coast AVA had been approved (the article appeared in the Napa Valley Register). It’s now been a year and a lot has happened in Malibu. First, shortly after the AVA was approved, a vineyard ban took effect. While this does not affect anyone within the City of Malibu, it affects anyone outside of Malibu who wants to plant vineyards in a coastal area. Luckily Dolin Malibu Estate falls within the City of Malibu and is not directly affected by this ban. But, Elliott will continue to fight the ban as he supports his neighbors and friends.

Then, Southern California didn’t have enough of a winter in 2014 so some of the grapevines never went through a dormant stage, followed by budding. Sadly, Dolin Malibu Estate was affected by this and while they are producing wine from the 2014 vintage, there will not be any wine in 2014 from the Chardonnay on their Estate.

And then there is the issue of the current drought. It is too early to tell what the affects will be. It may affect some of the vineyards that Dolin purchases fruit from but luckily the location of his estate Chardonnay is not affected as it is a cooler area that is influenced by the ocean. Despite the challenges over the past year, Dolin Malibu Estate continues to grow as a brand and produce more wines that celebrate the Malibu Coast AVA, as well as the Central Coast. A recent visit showcased the newly released 2013 white wines and 2012 red wines.

After planting in 2006, the first vintage from the Dolin estate was 2009 when they produced 105 cases of Chardonnay. That first year they were flying blind. It was their first vintage and they didn’t have a winemaker but made a wine that lived up to their number one priority – that they would drink their own wine.

In 2010, winemaker Kirby Anderson came on board and production was increased to 130 cases. That year they also won a Double Gold at the San Francisco Chronicle Wine Competition. They are now on their 5th vintage and the golden yellow 2013 Malibu Coast Chardonnay is a well-balanced wine with mild acidity and a round finish.

In 2013, Dolin also added a Chardonnay from Newton Canyon, a neighboring vineyard owned by Rosenthal. This wine also has nice acidity and the riper fruit notes are reflective of the warmer area.

A fourth Pinot Noir is from Sta Rita Hills and has classic notes of cherry, strawberry and cocoa. In addition to the Chardonnay and Pinot Noir, Dolin produced two Bordeaux-style red wines in 2012 from grapes from the Rosenthal Vineyard in Newton Canyon. Red Wine #1 is a blend of Cabernet Franc (60%), Merlot (30%) and Cabernet Sauvignon (10%) and Red Wine #2 is primarily Merlot. Both of these wines have lovely, soft tannins and are big but elegant wines.

Between the nine wines, Dolin produced 1900 cases in 2012, quite a change from the 105 cases in 2009. And, when Dolin tells the story of his wines, he speaks of them like they are his children. There is so much care and passion and it will be fun to watch the winery continue to grow.

If you want to taste the wines, you can find them at the Cornell Tasting Room in Malibu or at many local restaurants in the Malibu area.

The tasting of a lifetime: The great first growth of Royal Tokaji

In the wine industry, there are many once-in-a-lifetime experiences. Tasting a wine for the first time, pulling an old vintage…

Driving down Sepulveda Blvd towards LAX, it is easy to not really pay attention to the area around Jefferson Blvd. We are…

Driving down Sepulveda Blvd towards LAX, it is easy to not really pay attention to the area around Jefferson Blvd. We are…