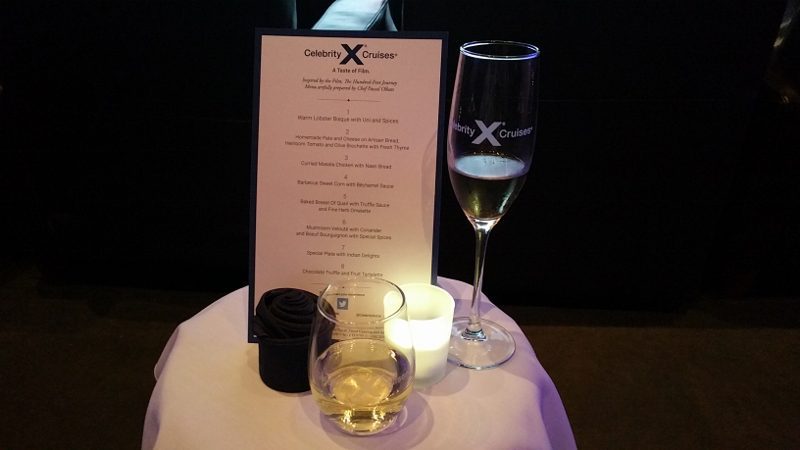 10 Jun A Taste of Film on Celebrity Cruises

When those movies come out that are about food, do you find it hard to sit through them without drooling or your stomach rumbling?  Think about theses some of these movies – Big Night, Julie & Julia, Chef, Big Night and the most recent food-driven movie, The Hundred-Foot Journey. As images food, cooking and eating appear on the screen, I know that I, for one, start licking my lips, dreaming about what I will eat when the move ends and wishing the popcorn was more satisfying.

Imagine if you could be eating dishes inspired by the film as you were sitting and watching it. Well, you can aboard Celebrity Cruises. As you are sailing on the open sea on one of three ships, you can experience a multi-sensory journey of watching a specific cultural, culinary or destination-based film, while dining on cuisine that brings the movie’s scenes to life through your taste buds. And, I got a taste of that experience during the first land-based Taste of Film Experience in Southern California at the Newport Beach Film Festival.

The movie was The Hundred Food Journey, the story of an extraordinarily talented and largely self-taught culinary novice who’s family is displaced from their native India and settle in a quaint French village. They open an Indian eatery but  the proprietress of an acclaimed restaurant just 100 feet away strongly objects. War erupts between the two establishments, until the young chef’s impressive epicurean gifts are recognized and the proprietress takes him under her wing.

Newport Beach local chef Pascal Olhats created a menu that tied with the film’s French and Indian cuisines. As we sat in the theater, sipping wines from Jackson Family Estates, the key was the timing of everything as each dish was connected to a specific scene in the film. 1. Course #1: Warm lobster bisque with uni and spices served when the Kadam family’s restaurant in India burned down and the mother Haddam dies.

Scene Details: As a child, Hassan Kadam regularly goes to market to buy uni for his parents’ restaurant and his mom taught him how to cook and to appreciate uni in the broth she would make. Scene Details: When the Kadam family moves to London, then to France where their van breaks down, a young French woman (a sous chef named Margaurite) rescues them and serves them cheese and pate, bread and vegetables from her garden. The family soon opens an Indian restaurant called Maison Mumbai across the street and 100 feet from a 1 Michelin star French restaurant run by Helen Mirren (Madam Mallory) called Le Saule Pleureur. There are continuous fights between the Kadam dad and Madam as cultures and cuisines clash.

Scene Details: Hassan masters the 5 sauces basic to any classic French cooking (bechamel, veloute, tomat, espagnole, mayonnaise). Margaurite explans that Madam interviews potential chefs by having them make an omelette for her. Scene Details: Hassan is offered a 6 month apprenticeship at Madam’s restaurant after he makes her a baked breast of quail dish like what she serves in the restaurant (which she pretends to hate). During the competition between the 2 restaurants, the head chef at Madam’s restaurant sets Maison Mumbai on fire and Haddam’s hands get burned. He can’t use them, but asks Madam if he can make an omelette for her with her help. So she does, following his instructions to add Indian spices; she loves it.

Scene Details: Served after Hassan moves to Paris and is one of the hottest chefs on the scene but one night eats Indian food with a fellow restaurant employee and gets homesick.

A movie can take you to another world and with A Taste of Film, all senses are activated. You will be transported into the film. Sure, I could try to do this at home but it would be disruptive to have to serve each course. Guess I will just have to plan a cruise on Celebrity Infinity and Celebrity Summit or Celebrity Millennium to get the full unique experience.

Napa Valley Grille has sat on a prominent corner in Westwood Village for fifteen years. It has been the location…

When I sat down for lunch with winemaker Stuart Marfell to taste two of the wines he makes, Goldwater and…