06 Feb A quiet visit to the Southern Willamette Valley

In the last few years, the Willamette Valley has been receiving extraordinary press, ratings and awards for its wines. It makes up only one percent of the wine made in the United States but is ranked fifth in production and third in number of wineries. More and more people are traveling to the Willamette Valley to explore the wonderful Pinot Noirs, Chardonnays, Pinot Gris and more.

Eugene is a two-hour drive from the north part of the valley but there is an airport in Eugene that has direct flights from a number of cities, including San Francisco, Los Angeles, San Diego, Denver and Chicago. And while the majority of wineries and vineyards are located in the northern part of the valley, the Southern Willamette Valley is home to more than 100 vineyards and more than 25 wineries, including King Estate, the largest winery in the entire state of Oregon.

In terms of raw materials, the north and the south of the Willamette Valley are similar. Across the Willamette Valley, the primary soils are marine sedimentary (Willakenzie), volcanic (jory) and windblown loess. The weather is similar, although there are some microclimate variations, which are not uncommon from one vineyard to the next.

But it is more rural in the southern part of the valley. The Southern Willamette Valley is Oregon’s agricultural heartland. Vineyards are interspersed with other agricultural products, including blackberries, boysenberries, hazelnuts, apples, lavender and Oregon truffles. Southern Willamette Valley is less touristy and less frenetic and there are still plenty of wineries to visit.

The largest winery in Oregon, King Estate encompasses 1033 acres. The property, formerly a hay farm, was discovered by Ed King in 1990 and by 1994, more than 100-acres were planted. Today there are 475 acres under vine, 300 of which are planted to Pinot Gris, a specialty of King Estate. King Estate remains a family-owned and operated winery that was certified organic in 2002 and biodynamic since 2016. King Estate also has a restaurant on property that features seasonal ingredients from the 30 acres of organic gardens and orchards on the estate.

Doug Lavelle, a former corporate executive, started LaVelle Vineyards in 1994. He looked for property from Portland to Eugene. Originally from a small town in Iowa, he was drawn to Eugene. He wanted to create a family owned winery and create a simple lifestyle with a home on a vineyard, where he could be part of a handful versus one of many. He discovered the Forgeron Vineyard, originally founded by Lee and Linda Smith in 1972, which is the oldest winery in the southern Willamette Valley. Today, the 25-acre property has 16 planted acres and LaVelle Vineyards produces 2,500-3,000 cases annually. 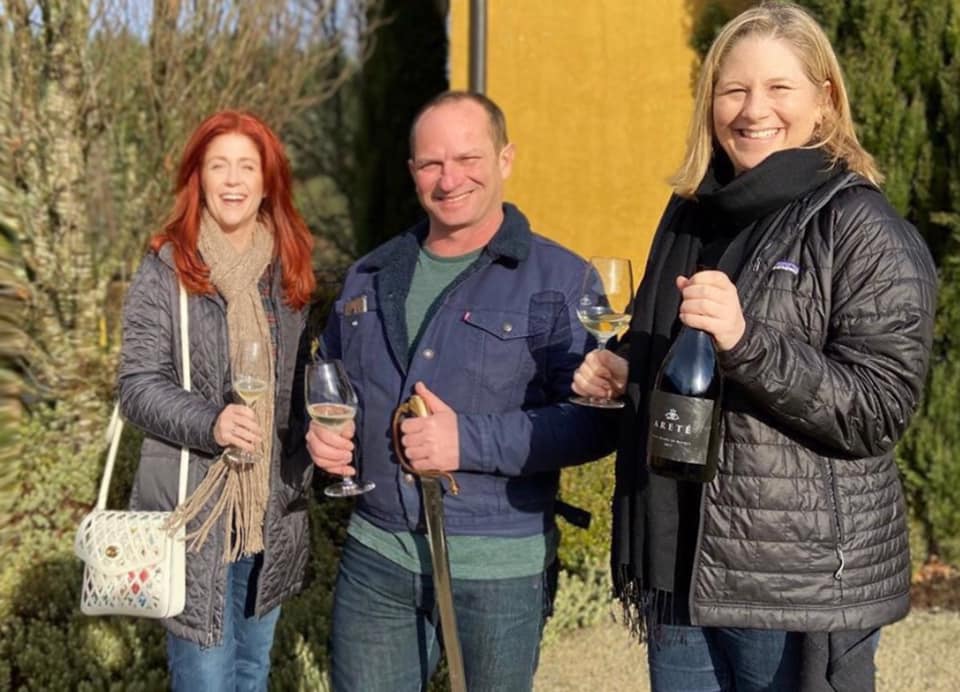 Richard Boyles and Pamela Frye purchased the 870-acre property in 1995. Originally from Roseberg, Oregon, Richard met Pamela at the University of Oregon in Eugene. Work took them to Europe where they fell in love with wine. They returned home to Eugene where they started their own winery. Iris Vineyards is built on the ancient Greek philosophy of Areté, of reaching one’s fullest potential. The first vintage of Iris Vineyards was released in 2001. In 2008, Aaron Lieberman joined Iris Vineyards as winemaker.

The first bonded winery in Eugene, Oregon, Hinman Vineyards was established in 1979 by Doyle Hinman. In 1993, Carolyn Chambers purchased the five-acre property and renamed it Silvan Ridge, after her maiden name “Silva.” Carolyn’s daughter Elizabeth was the General Manager and today Elizabeth’s daughter Julia and her husband Andrew Stiltner, oversee the winery with Juan Pablo “JP” Valot as winemaker.

Founded in 1978 by Dan Smith, Sweet Cheeks Winery is a family-owned business run today by Dan’s granddaughter General Manager Jessica Thomas. The vineyard is planted on a rolling hillside that looked like “sweet cheeks”, hence the name. Dan sold his grapes until 2005 when the first wine was produced. Winemaker Leo Gabica was the first employee ever hired at Sweet Cheeks Winery in 2005. Originally from the Philippines, Leo started as assistant winemaker and in 2013 became the head winemaker.

An urban winery and tasting room in Eugene, J Scott Cellars was started by Jonathan Scott Oberlander. Jonathan is originally from California. After receiving a master’s degree in enology at UC Davis, Jonathan worked at Bernardus Vineyards and Winery in Monterey. He moved to Eugene in 2003 to work at Silvan Ridge and started his own brand during this time. In 2013, Jonathan focused on J Scott Cellars full time where he produces wines from grapes sourced from throughout the Pacific Northwest.

If you want to go somewhere with a slower pace and less tourists, venture to the Southern Willamette Valley for a few quiet days of exploration.

A crab cake cook-off and wine tasting competition! All you can eat crab cakes paired with crisp, delicious, cool-climate Mendocino…

Please The Palate Wine of the Week: Badia a Coltibuono Chianti Classico 2017 DOCG

Please The Palate Wine of the Week: Badia a Coltibuono Chianti Classico 2017 DOCG