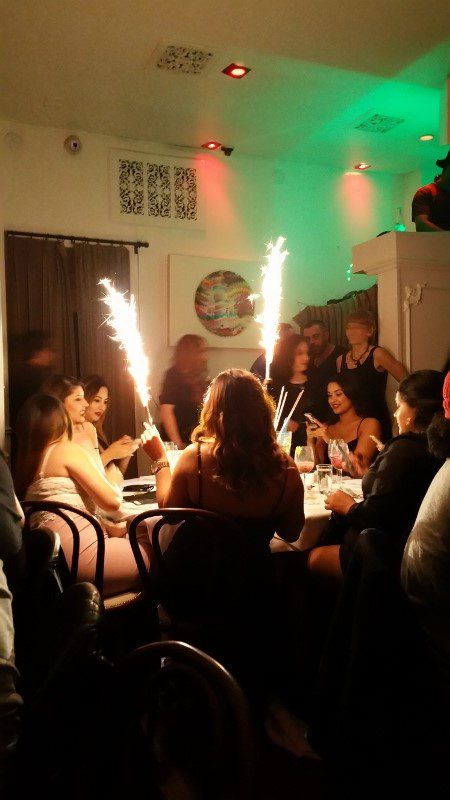 02 Mar A Dining Experience That Does Not Please The Palate

OK, I should know better than to go out to eat on a Friday night. As a foodie, we all know the best nights to eat out are Sunday – Wednesday. But, a friend invited me to check out the “new menu” at Bagatelle and as they only serve dinner on Friday and Saturday, we went out on a Friday.

Bagatelle is about the scene more than anything else. Famous for brunch celebrations where the drinks flow for hours, I knew what kind of place I was heading to for dinner. But, based on the experience, I will be avoiding scene-driven venues from now on. Every element of our meal was an exercise in how NOT to please the palate.

We sat down at a 2-top table and our good-looking waiter came over to ask if we wanted a drink. We told him that we wanted to check out the new items from the winter dinner menu and he answered that there wasn’t a new menu. He said that most of the dishes had been on the menu since he had been there, which was when the restaurant opened over a year ago. We explained that we had heard there were some new truffle dishes and he pointed out a few of the “newer” items.

Half the menu teases you with truffle dishes – truffle flatbread, truffle chicken, truffle gnocchi and so on. But, this is very misleading. There is not one dish with fresh shaved truffles on it. Every single dish that has the word truffle in it used truffle oil – rather deceiving!

The restaurant was busy when we walked in at 8pm but by 9pm, almost every table was full. I would say that this is a good thing but in this case it was not. The room was so packed that my friend and I were suddenly packed into our table. We had columns on one side of us and a table of 10 people packed in on the other side. The guy at the head of the table was literally sitting ON our table. So much so that not only was his back on top of our bread but when he started to dance with the music playing, our table was shaking. If that wasn’t bad enough, he still had his sunglasses on his head and ordered a skinny vanilla latte at 11pm and then complained to his friends when he wasn’t sure if they could make one for him. It was so bad that our server could not get to us to deliver food or remove plates. The only bright light was the runners who were so friendly and apologetic, saying that no one seems to know what they are doing there. In fact, we were served dishes and share plates but had no silverware. And, as we were lost in a sea of people in the dark, loud room, we had to start waving to get someone’s attention and it still took awhile for anyone to notice us.

Then suddenly, without warning, the manager (I assume), came over to our table to deliver 2 complimentary terribly sweet shots. He had not spoken to us and had not come to ask how we were. But, he waltzed over, handed us the shots and said he hoped this made things better.

As we proceeded to eat our “truffle” dishes, we witnessed the pomp and circumstance of punch bowls being served to tables with flares. And, as each one was placed at a table, you would hear the screams of girls and then watch as a ridiculous amount of selfies were taken. All we kept wondering was who was going to set their extensions on fire first.

Just when we thought that another body couldn’t fit on the dining room floor, a man in a hat and scarf began working his way around the tables to take photos. How could he ever think he could sell one of those photos with all the selfies being taken? It was like the person selling roses who comes up to you at dinner and is disruptive. Ah, but don’t worry, when we were leaving, the lady with the roses was walking in to join the photographer on the crowded dining room floor.

We had finally had enough and got up to leave. We stood up and walked up the stairs to the bar. We turned around to quickly look at the dining room floor but before we could even turn around, the bouncer quickly rushed us out. As we headed to the door, an officer was standing there to “preempt issues”. Hmmmm, I don’t think I will be going back to Bagatelle and if you want a palate pleasing experience, I wouldn’t recommend it either.

Bring On The Meat at Fogo de Chão

If you like meat, then Fogo de Chao might just be paradise. Originally from Brazil, there are now 27 restaurants in the…

Last time I was in downtown Santa Barbara (less than a year ago), I went to a pop-up sushi bar…

Last time I was in downtown Santa Barbara (less than a year ago), I went to a pop-up sushi bar…