22 Jun Women In Wine Across The Globe

We see so many female winemakers today but 30 years ago, that was not the case. It is thanks to the trailblazers that proceeded the current generation. I profiled three women who have been in the wine industry for more than 20 years in Sheville.org and in ATOD Magazine, and I am sharing it here.

When winemaker Cathy Corison was graduating from UC-Davis with a degree in Enology, her major professor sat her down and told her there was no way she would ever be a winemaker in the Napa Valley bcause she was a woman. “I wasn’t defensive about it,” Corison, who has been making wine in the Napa Valley for 45 years, said in an episode of Verticals on SOMM TV, “but I heard this little voice in my head that said, ‘Watch me.’”

In 1978, when Corison graduated, there were only 30 wineries in Napa Valley and even fewer female winemakers. The first wave of female winemakers came between 1965 and 1974, beginning with MaryAnn Graf, the first woman to receive an Enology degree from UC-Davis in 1965 and California’s first female winemaker since Prohibition. Zelma Long, Barbara Lindblom, Merry Edwards, Dawnine Dyer, Genevieve Janssens, and Sandi Belcher were also part of this first wave of trailblazers.

When Corison began working in the wine industry in 1978, she was part of the next wave of women entering the field of winemaking between 1975 and 1979. Corison was in company with 15 other female winemakers, including Milla Handley, Rosemary Cakebread, Eileen Crane, Julianne Laks, Carol Shelton, Helen Turley, and Carol Meredith. Another 25 women, including Heidi Peterson Barrett, Kristin Belair, Kathy Joseph, Mia Klein, Pam Starr, Lane Tanner, Celia Welch, and Signe Zoller, were part of a third wave to enter the field between 1980 and 1984.

While Graf was the first woman to graduate from the UC-Davis enology program in 1965, by the 1990s, women made up half of all undergraduates. Today, according to a 2020 Women Winemakers of California and Beyond Organization study, women are lead winemakers at only 14 percent of the 4,200+ bonded wineries in California, and even fewer own their own wineries. That is less than 600 female winemakers in California and less than 200 that own wineries. 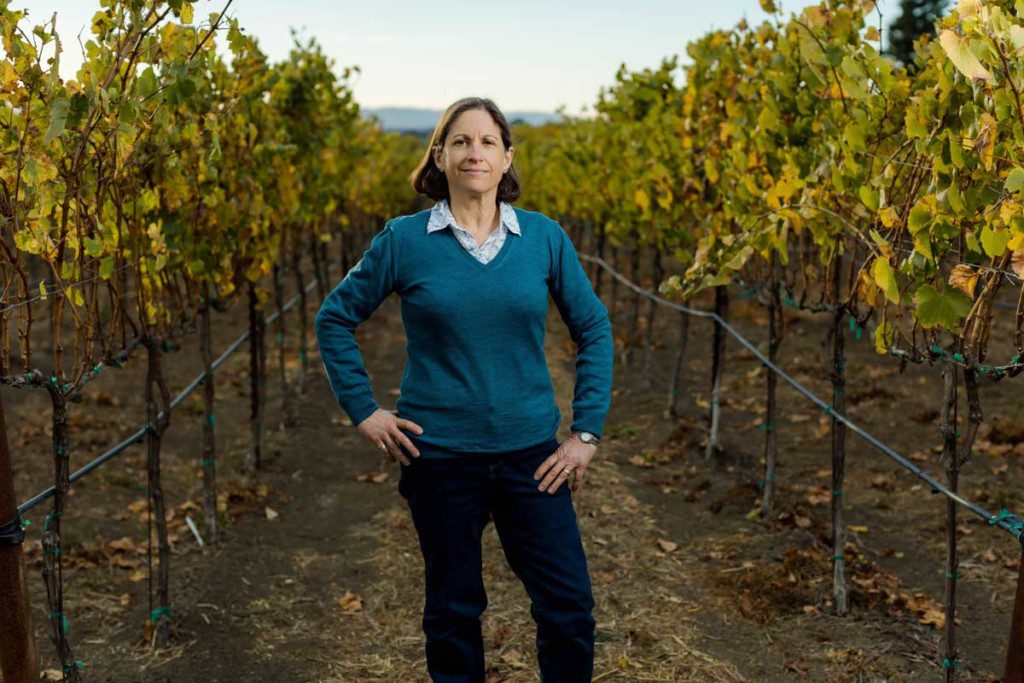 Linda Trotta has been making wine for more than 30 years. A Southern California native, Trotta learned to make wine in the garage with her Italian grandfather. She thought everyone had barrels in their garages and did not know winemaking was a profession. Trotta went to UC-Davis to study math but instead earned degrees in Enology from UC Davis and in Italian Art History from Universita`degli Studi di Padova. After working in wineries, Trotta became director of winemaking at Sonoma Valley’s renowned Gundlach Bundschu Winery in 1990. Trotta was head winemaker at startup winery Swiftwater Cellars in Washington State, where she had the opportunity to build a winemaking program from the ground up. She has also worked harvests around the world, including Italy, South Africa and Chile. She joined WX Brands as winemaker for Reata, Silver Spur, Double Lariat and Whiplash in 2017 and today makes a number of wines within the WX Brands national brand portfolio, including Bread & Butter Wines.

In 2018, Linda was named the North Bay Business Journal’s Napa Valley Winemaker of the Year. She has held a leadership role with Women for Winesense and is currently with Wine Women, an organization that champions the advancement of women’s careers in wine.

There were challenges for women in the wine industry when Trotta was first getting started. She says it was “tough to get recognized, tough to advance.” She thought it was that tough for everyone but realized it was hard because she was a woman. “Just being recognized for who I was was challenging,” she says. “A vendor coming to the property to sell something would look at the guy I was talking to. My guy would stop and say, ‘No, she is the winemaker.’ This seems small, but it was thing after thing, and I had to work harder to advance.”

It has gotten easier, Trotta says, and she does not have to fight as hard to be heard.

“After 35 years of making wine, I am still awed by the possibilities of what we can do,” she says. “Throughout my career, I have received valuable mentoring from women and men, and I have grown as a winemaker and a person. In addition to honing my craft continuously, I really want to give back where I can. I want to give someone else that little bit of help they need to progress.” 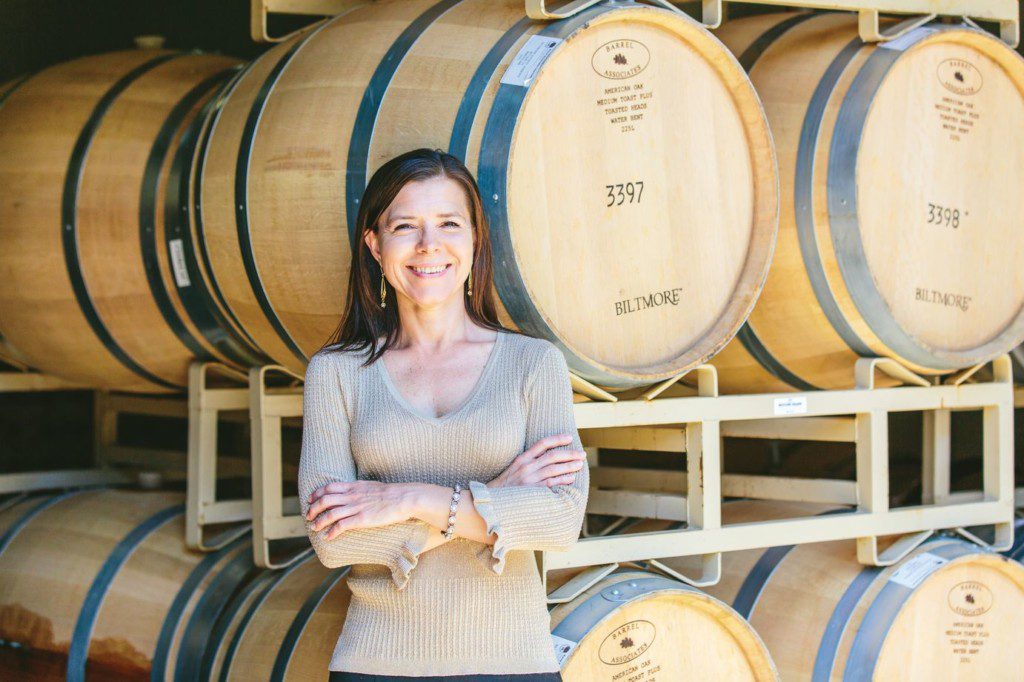 Sharon Fenchak joined Biltmore Wines in 1999 and became head winemaker in 2018. Raised in Pennsylvania, Fenchak was a communications specialist in the United States Army before she received a bachelor’s degree in Food Science from Penn State University, followed by a master’s degree in the same field from the University of Georgia at Athens. She started her winemaking career at two wineries in Georgia before moving to North Carolina to work for Biltmore Wines.

Biltmore is the Vanderbilt family’s estate. The Vanderbilts began planting grapes beside the house beginning in the 1970s. They brought French winemaker Bernard Delille over to consult and switched to the grape species Vitis vinifera in the 1980s. The winery opened in 1985, and today there are 50 acres planted exclusively with this species, a rarity in the Southeast.

The biggest challenge Fenchak faced at the start of her career was finding someone willing to take a chance on hiring a woman. In the late 1990s, “it was unique to hire a woman as a winemaker or assistant winemaker,” Fenchak explains. “Once we are in the positions, we have to be really persistent and work really hard to prove ourselves. But do we have to prove ourselves more than a man? I am not sure.”
She adds, “I am extremely stubborn and never give up. I am not giving in to anyone who says, ‘No, you can’t do that.’ I can do anything I want if I put my mind to it. As a woman in wine, or any career, there are doors closed to you, and you just have to open them up and keep going.”

Fenchak’s focus is on continuing the legacy of Biltmore wines for next generations, helping other local winemakers and grape growers, and elevating the North Carolina wine industry. 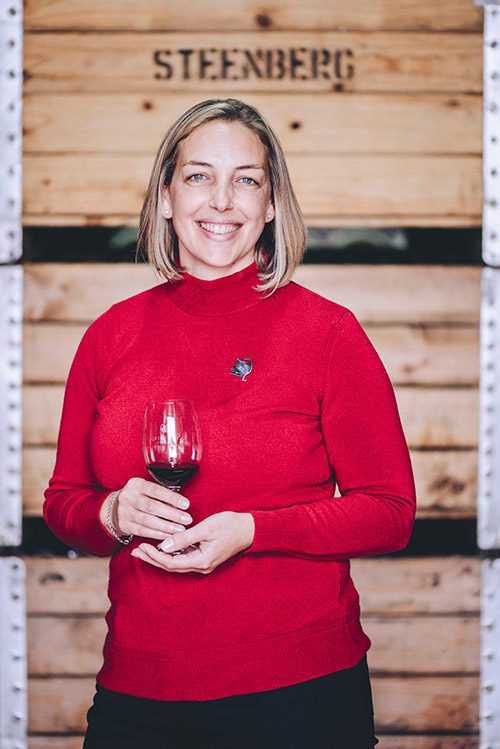 Elunda Basson studied Viticulture and Enology at the University of Stellenbosch and completed her diploma in Cellar Technology at Elsenburg Agricultural College. Basson worked a harvest at Dry Creek Vineyards in Sonoma County in California and then spent years honing her skills at wineries in South Africa, including Rickety Bridge in Franschhoek, Nederburg, Pongrácz and J.C. Le Roux. Basson specializes in méthode cap Classique (MCC), a category of sparkling wines made in South Africa, and has received awards, including producing the champion wine at the 2018 Vertex Awards.

With two decades of experience, Basson joined Steenberg Vineyards in 2019. Recognized as the oldest registered farm in South Africa, Steenberg was founded in 1682 by Catharina Ras. Dressed as a man, Ras got on a ship from Germany to go to the southernmost tip of Africa. She married five times, faced adversity, and made a success of her life. Her courageous attitude is at the heart of the brand and part of its ethos, and Basson feels responsible for continuing that legacy. Steenberg has a culture of acceptance and motivation, and the current management team, from the executive chef and general manager of the hotel to the vineyard manager and the winemaker, are all women.

Basson was raised to believe in the power of positive thinking, and one of her mottos is to believe that she can. “Of course there have been moments where I have felt that I was treated slightly differently or unfairly,” she says. “Whether because of gender, race, orientation, or appearance, all of us have faced these moments. But since I joined this team, my experience has been completely different.”

Read the original story in Sheville.org or in ATOD Magazine.

Lang & Reed: From Franc to Blanc

It's Drink Chenin Blanc Day! So pull out those bottles of beautiful Chenin Blanc and pour yourself a glass while…