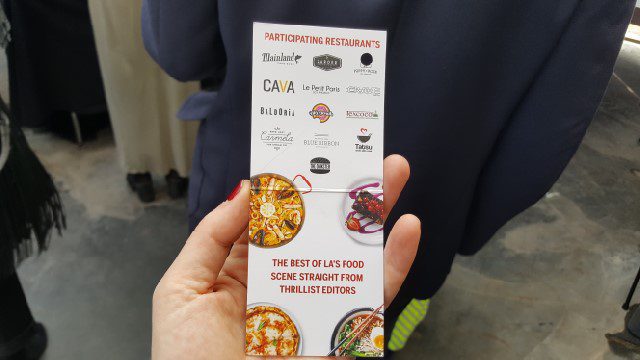 12 Dec Thrillist’s Fest of the Best in LA Recap

Thrillist is one of the most irreverant guides of where to eat and drink and where to go in cities across the U.S. In addition, they are a great source for telling us about fun events around town, from festivals to concerts and beyond. But this past weekend, they hosted their own food festival called Fest of the Best in LA. During a weekend afternoon, thirteen hand-picked restaurants were showcased for a few hundred Thrillist food-enthusiasts.

Thrillist selected restaurants that have been ranked by Thrillist for some of the city’s best food. That is right, some of Los Angeles’ best bites! Here is a recap of what was tasted!

The Lamb Barbecue Taco was our first bite when we walked into the event and we knew it was going to be a good day. The lamb was tender and could be topped by fresh onion or habanero onions and mild or hot salsa. But it was the cup of lamp juice, like a thick bone broth, was the pièce de résistance.

Downtown LA’s Le Petit Paris just celebrated their first anniversary. And in their first year, they received the award for best French restaurant. They served a classic French dish of skirt steak with shallots and red wine sauce, served with mashed potatoes.

I have had dinner at Baldoria a few times. But after trying the chicken and waffle tacos with spicy fried chicken, apple-cinna waffles and Whistle-Pig maple syrup, I think I will be heading downtown for brunch. I loved the play on sweet and spicy.

I overheard one guy say to his friend, while standing in line for donuts, say, “At the Cava station, it’s just vegetables.” I told him not to underestimate the veggies. The seasonal veggie mini-bowls, filled with roasted seasonal vegetables and brown rice with roasted red pepper hummus, cucumbers, cherry tomatoes, pickled onions, fresh mint and green harissa dressing, were full of flavor and quick filling.

A table full of freshly baked bread is rather enticing. But in addition to the blueberry rye boule and Nathan’s Sourdough #2 breads to sample, the chewy chocolate chip cookies and ginger date molasses cookies, were hard to resist. I had to grab a few extra to snack on later.

With poke shops popping up all over Los Angeles, Mainland Poke won the award of best poke shop. They served bite-sized poke spoons of their fresh, sustainable, sushi-grade fish that were delicate and delightful.

DK’s Donuts’ table was the most vibrant and colorful table. And with piles of donuts, we were drawn. It was hard to chose between the SO Samoa Girl Scout Cookie Donut (DK’s homemade caramel sauce with freshly toasted coconut and chocolate drizzle), DK’s Little O’s (mini sized donut-croissant hybrid stuffed with DK’s special house cream or nutella) and the UBE Purple Crumb Cake Donut (made with sweet purple potatoes known for their purple color and antioxidants and B vitamins and topped with sprinkles, fruity pebbles or bacon). I opted for a sample of each of them and while I liked them all, the SO Samoa Girl Scout Cookie donut was my favorite.

I frequent the Tatsu Ramen on Sawtelle and was happy to see that they were selected for best ramen. After standing in a long line, we chose between Naked Ramen, Old Skool Ramen, Soul Ramen and Bold Ramen. I went with Soul Ramen made with homemade Tonkotsu broth, black garlic oil and sweet umami sauce and served with ground beef and pork.

As we stood in line for a sushi roll from Blue Ribbon, we grabbed a Pork Adobo Burger from The Oinkster. The winner of the best burger, it is not a typical beef burger but rather a pork patty topped with pork adobo stew, pico de gallo and garlic aioli, served on a pan de sal bun. I was already full and thought I would just take one bite but ended up finishing the entire mini-burger.

Blue Ribbon Sushi had a long line as well as they were making handrolls to order. They offered a spicy tuna handroll or a California handroll.

With so many artisanal ice cream shops opening across Los Angeles, winning the award of best ice cream is an achievement. At Carmela, the ice cream is made with organic dairy and seasonal farmers market produce. We could chose from Lavender Honey Ice Cream (organic lavender flowers are infused into milk and cream and sweetened with a touch of honey), Dark Chocolate Cacao Nib Ice Cream (blend of dark and bittersweet chocolates, cacao powder and crunchy cacao nibs) and Salted Caramel (handmade caramel with a  touch of sea salt). I broke the rules and asked for two flavors – dark chocolate cacao nib and salted carmel.

I love crepes. While voted for best late night, I love crepes anytime of the day. Crave’s homemade crepes with Nutella, sugar and whipped cream were the last bites of the day.

Just because you did not attend Thrillist’s Fest of the Best LA does not mean you cannot enjoy all of these dishes. Head out and try any of them and you will not be disappointed.

A brick facade along Lankershim Boulevard in North Hollywood is what you are looking for. From the outside, it is a non-descript…