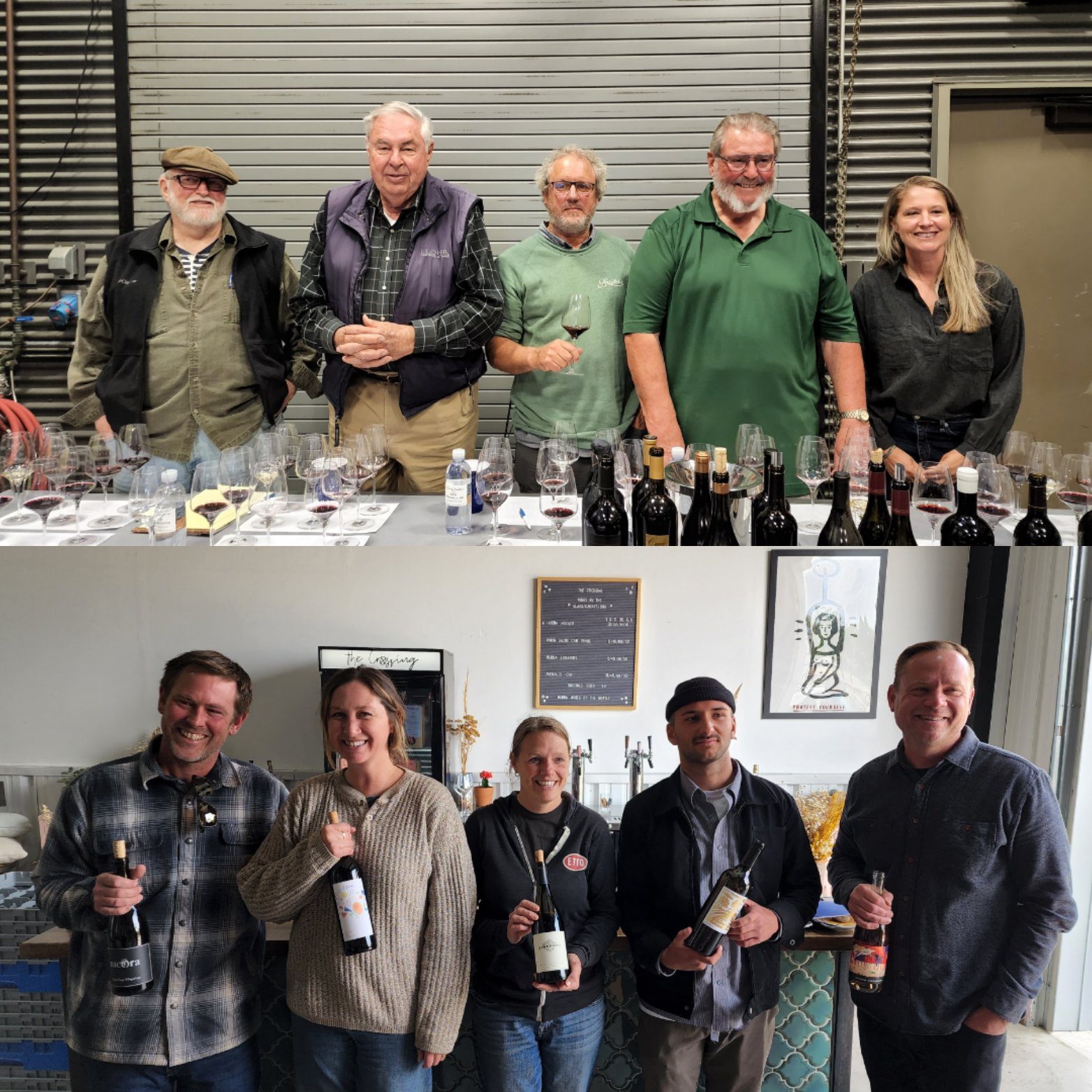 07 Jun Then and now in Paso Robles

Every wine region has multiple generations of winemakers. There are those who were there in the early days of the region and others of coming more recently to make their mark. On a recent trip to Paso Robles for the Wine Writers Educational Tour, we enjoyed a panel of some of the people who came to Paso Robles forty to fifty years ago to make wines. Following that panel, we met with a group of younger winemakers who have come to the region with the same intent. It is because of the first generation that others have been drawn to Paso Robles and they have played a mentorship role to many. And now the younger generations carry on the the traditions while moving the region forward, as I wrote about in the Napa Valley Register and share here.

Although grapes were first planted in Paso Robles in 1797 by the Spanish conquistadors and Franciscan missionaries, and commercial winemaking was introduced in 1882, the Paso Robles wine region only became established as a premier wine region in the 1970s and 1980s.

In Paso Robles’ early days, young winemakers were drawn to the region before it had an identity. Now, 50 years later, a new generation of winemakers have come to the region to help move that identity forward.

On a recent trip to Paso Robles, I attended a seminar and tasting with the people who helped define the identity of region, followed by a lunch and tasting with some of the younger winemakers in the area.

When this generation first started in Paso Robles, there were only seven wineries. They purchased land and planted vineyards in what was seen as the wild west. These are some of the people responsible for putting Paso Robles on the wine map.

Jerry Lohr grew up on a farm in South Dakota. After three years at Stanford and three years in the Air Force, Lohr worked at NASA. As he made more money, he drank more wine. He traveled and took classes.

Gary Eberle played football for Joe Paterno and spent eight days with the Detroit Lions, but bad knee took him off the field. He got his master’s degree, followed by a doctorate, and was a National Science Fellow.

Instead of becoming a geneticist, Eberle decided to focus on wine and drove out to California from Louisiana in 1971. He went to UC Davis and between 1973 to 1982, he planted 700 acres of vines, including the first modern commercial acreage of Syrah in California.

John Munch, owner and winemaker at La Cuvier, was drawn to the wild west spirit of Paso Robles and put down roots in the late 1970s, after studying poetry at Berkeley and working in Europe and San Francisco. While he did not intend to become a winemaker, Munch became the winemaker for the old Estrella Winery and later launched Adelaida Cellars.

Neil Collins, winemaker at Tablas Creek, moved from Bristol, England in the 1980s and worked in restaurants as a cook. Living in Paso Robles, he became infatuated with wine. He called Eberle for a job but was rejected. He sent a letter to Adeleida, interviewed with John Munch and got the job.

In the past four-plus decades, there has been an avalanche of change in Paso. Today there are more than 200 wineries in Paso Robles. New winemakers, who do not come from multi-generational winemaking families, have found their way to Paso Robles. Land is more expensive now, and their bootstrap wineries have found a home in Tin City, an industrial park in Paso Robles.

Curt Schalchlin started Sans Liege Wines in 2006. He made wine in Santa Maria for 14 years before finding his home in Tin City. He made the move to Paso Robles for the community.

At Sans Liege, Schalchlin traditionally focuses on Rhone varieties and sources fruit from vineyards that express distinctive character. He was drawn to Paso Robles for the hands-on wine community of owners and operators with whom he shares a common love of Rhone varieties.

Riley Hubbard first started working in Paso Robles at L’Aventure Winery while getting her degree in ag business with a minor in viticulture from Cal Poly, San Luis Obispo. She worked harvest at Torbreck Winery in the Barossa Valley in Australia before moving to Montpellier, France to get her master’s degree with the Vinifera Euromaster program. She worked at Domaine d’Aupilhac in Montpeyroux, France and finished her degree in Udine, Italy in the heart of the Friuli region.

Drawn to the warm and inviting community of Paso Robles, she worked at Law Estates and Desparada Wines, and today consults for Monochrome Wines. In 2016, Hubbard started her own label, Hubba Wines, and moved to Tin City in 2020. She feels Paso Robles is one of the most beautiful places she has ever seen and loves the laid-back yet hard-working lifestyle that everyone embraces.

Brian and Stephanie Terrizzi met in Fresno State in 2004. With a passion for Italian wines, they were drawn to Paso Robles as they believed it offered many of the same attributes of top wine-growing regions in Italy. They launched Giornata in 2005 with a barrel of Nebbiolo and today are working with Vermentino, Fiano, Barbera, Nebbiolo, Agliantico and Sangiovese. They have been in Tin City for almost a decade and launched a line of fresh and dry pastas called Etto, which they sell in their retail market in Tin City.

Orion Stang was born and raised on the Central Coast. He started in culinary school and worked in restaurants but his interest in wine grew. He moved to Napa Valley to study at the Culinary Institute of America’s wine immersion program and then chose Paso Robles as it seemed like a good place to start on the ground floor.

After working at wineries, he started his own label, Dilécta, and, in 2019, he launched Emercy Wines with partner Richard Crockett.

Nick Elliot was born in Fresno and knew little about wine. He moved to Paso and got a job in construction but got his start in wine by shoveling grapes and learning everything he could.

He worked under mentors such as Scott Hawley of Torrin, Eric Jensen of Booker, and Bob Tillman of Alta Colina. He learned through experience and worked for the money to buy grapes and barrels.

He launched Nicora in 2009, named after his himself and his grandfather Ora, and focuses on sourcing fruit primarily from Paso Robles, as well as Edna Valley and Santa Maria.

These younger winemakers have been mentored by those before them who helped define Paso Robles. What they have learned stays with as they put their own mark on their wines.

Water connects every aspect of life but sadly there is a world water crisis. We need to protect and restore…

Please The Palate Pick of the Week: The Perfect Shot of Espresso, Italian Style

There is nothing like the perfect shot of espresso. And for me, the only place to find that is in…