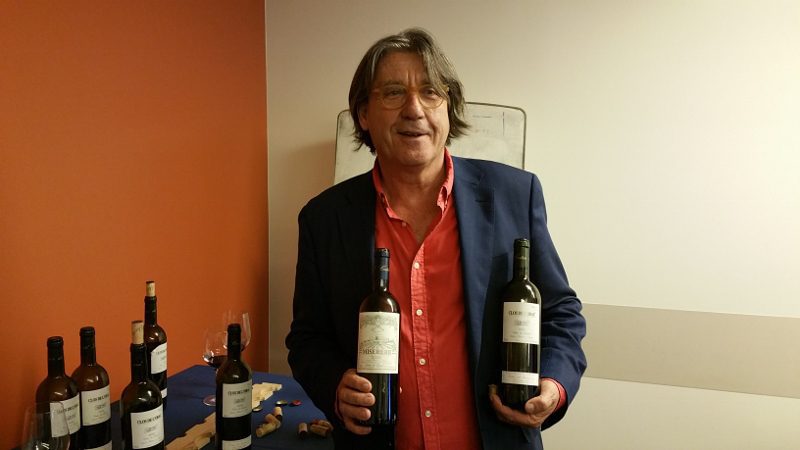 This piece originally appeared in the Napa Valley Register (November 6, 2015)

If someone had told Carles Pastrana years ago that he would be considered the patriarch of modern Priorat wine and the owner of two of the greatest wines in the world (Clos de l’Obac and Miserere), he would have said they were insane.

Priorat is not a normal region. A tiny region within Catalonia, Spain, Priorat is a small area that covers 4,000 acres. A very hilly area with hot and dry summers and cold and windy winters, the soil consists of slate, rocks and bushes. It is not an area to easily plant in and many were thought to be foolish to plant there. The Romans did not dare to try. But in the 12th century, the Catalonian king founded a place for monks. No vines, no grapes. No grapes, no wine. No wine, no communion. So, the first thing to do when the monks moved in was to plant grapes.

Priorat gained in popularity in the 19th century. When phylloxera hit France in the 1860s, the French were replanting their vines and the prices of Priorat wine went up. But, once the French finally replanted their vines and after seven centuries of breaking rocks and planting vines, Priorat was hit by phylloxera and within two years the vines were wiped out. Winemaking began again in Priorat in the early 1950s and the region became a D.O. (Denominacion de Origen) in 1954. It is an area famous for rustic, high concentrated, big wines.

They worked for 10 years to prepare the vineyard, and, in 1989, they produced the first vintage of Clos de L’Obac. It was released into the market in 1991. A few months later, Clos de l’Obac 1989 was recognized by the prestigious French guide Gault Millau as one of the great wines of Spain, and the World Wine Guide recognized it among the top 150 wines in the world.

Then, in 1994, at the Stockholm Great Tasting, Clos de l’Obac 1990 was rated the best wine with the same score as Chateau Petrus. Priorat was back on the world map. And, since then, Clos de l’Obac and Misterere (another label they produce) have received consistently high scores from all of the top wine critics.

One of the unique things that Carles Pastrana does with his wines is that his is the only winery in the world that produces the exact same varietals blends. Each year they use the same vineyards, the same varieties and the same blend percentages and they never waver. The Clos de L’Obac (which is named for the shady part of the mountain) is always 35 percent grenache, 35 percent cabernet sauvignon, 10 percent merlot, 10 percent syrah and 10 percent carignon. The Miserere, which means “mercy” in Latin, is named in honor of the monks who first worked hard in the vineyards and is always 27 percent grenache, 27 percent tempranillo, 26 percent cabernet sauvignon, 10 percent merlot and 10 percent carignon. The grapes are picked according to maturation and then fermented together. Fermentation lasts 15 days, followed by 25-35 days of maceration. The grapes are pressed at the end of October or early November.

After 35 years and 28 vintages, Carles finds it exciting to perceive differences in vintages. “In wine the truth is never told. In wine the truth must be uncorked.” He continued, “Everybody can know if a wine is a great wine or not even if you never tasted wine. Wine is good because you like it. Wine is related to pleasure. I can give you a piece of cake but I can’t give you pleasure. Pleasure is one’s own interpretation.”

Carles also believes that a great wine must be able to last for decades. A recent tasting of the wines included tasting Clos de L’Obac and Miserere from 2000, 2002, 2004 and 2005 and 2006. Carles believes that “a great wine must last” and these 10-plus-year-old wines are showing beautifully. Miserere 2005 is a little more elegant with notes of black and red fruits, licorice and minerality; the Clos de l’Obac 2005 is a little bolder with notes of ripe red fruit and bramble; the Clos de l’Obac 2004 has notes of red fruits and lavender. In all, the wines of Clos de L’Obac and Miserere are elegant, fine wines with big concentration and that is why they are considered some of the best in the world.