26 Feb Please The Palate Pick of the Week: Dining at Maude Restaurant After Two Years

On February 6, 2020, one of my last fine dining meals before lockdown, I ate at Maude for the 47th time. Of the 55 menus Maude offered over a 5 year period, I enjoyed 85% of the menus. I was a definite regular at Maude and have been patiently but eagerly waiting for Maude to reopen! Finally, after almost two years to the date, Maude reopened on February 14, 2022 and I was sure to make my reservation. This past weekend, I finally found myself back at Maude and Dining at Maude Restaurant After Two Years is the Please The Palate pick of the week.

Walking into Maude felt like coming home. An intimate space, it felt like entering a friend’s living room. Tables were full and the kitchen team was busily preparing various courses. While everything felt and looked as I remembered (I still cannot believe it has been two years), I did not recognize anyone. That is because one change is an entirely new team at Maude.

Front of house is manager Jean-Francois Henry who welcomed us with his energetic charisma and his charming French accent. At the helm in the kitchen is the new chef de cuisine Osiel Gastelum who grew up between Culican Sinaloa, Mexico and Southern California. And in charge of the imaginative and delicious desserts is pastry chef Isabell Manibusan.

Another change is the menu. For Maude’s first three years, the menu featured a single seasonal ingredient that changed monthly. For the next two years, Maude traveled to a wine region somewhere in the world which inspired a menu that would run for three months. Now the menu at Maude is a 9-course (and then some) contemporary American menu highlighting California’s finest ingredients from the land to the sea and inspired by Chef Osiel’s upbringing highlighting some signature traditional Mexican ingredients.

As we settled in for what would be an exquisite and delicious dinner, I decided to add on the classic wine pairing. Each wine was a spot on match to the dish and I was in heaven. 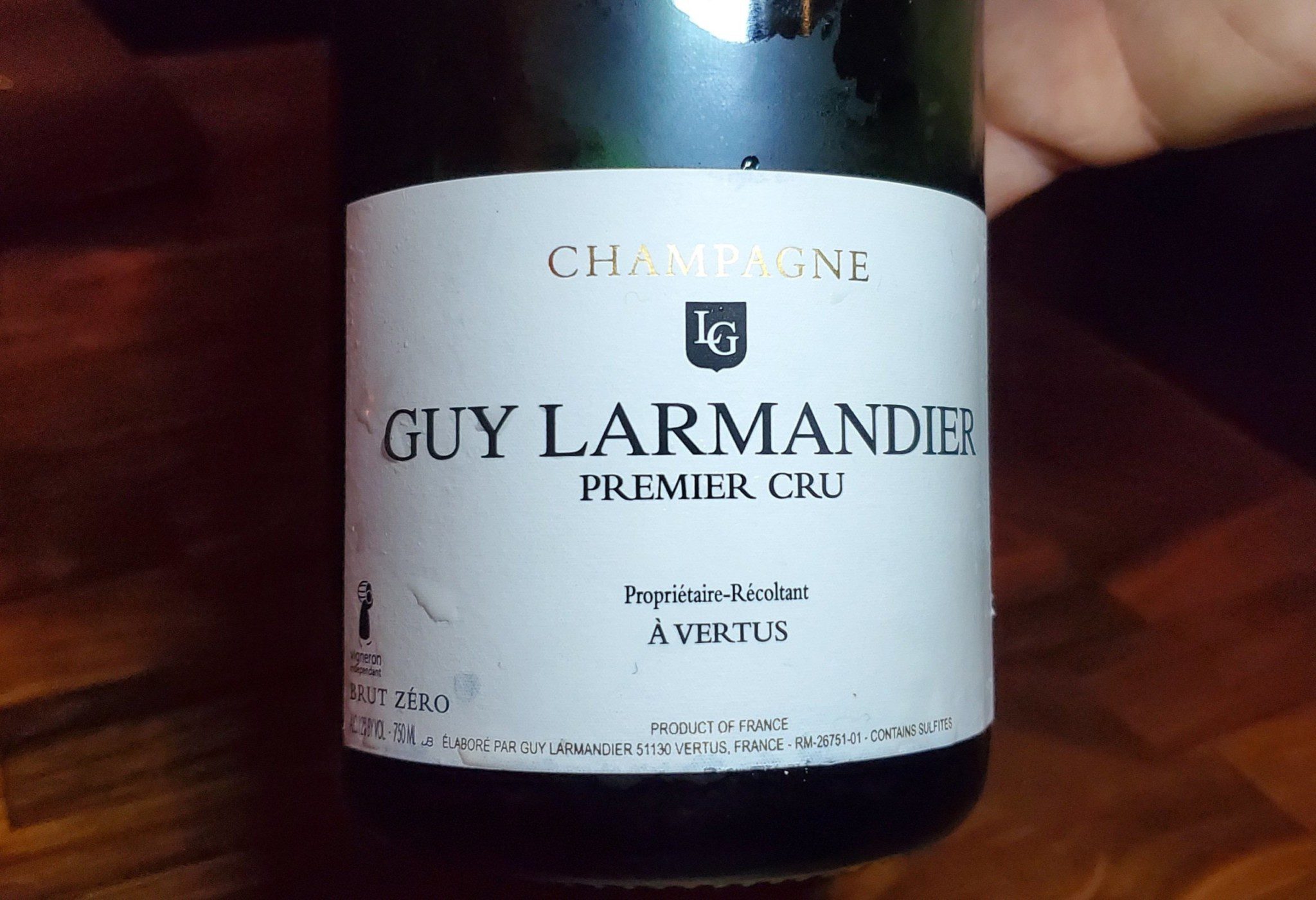 The Champagne was paired with the “Snacks” which were Seabass Infladita Wakame, Cauliflower Caviar, and Mushroom Sfogliatella. These three small bites were so exquisitely delicate, flavorful, and textured that we wanted more. Our meal was off to a great start. 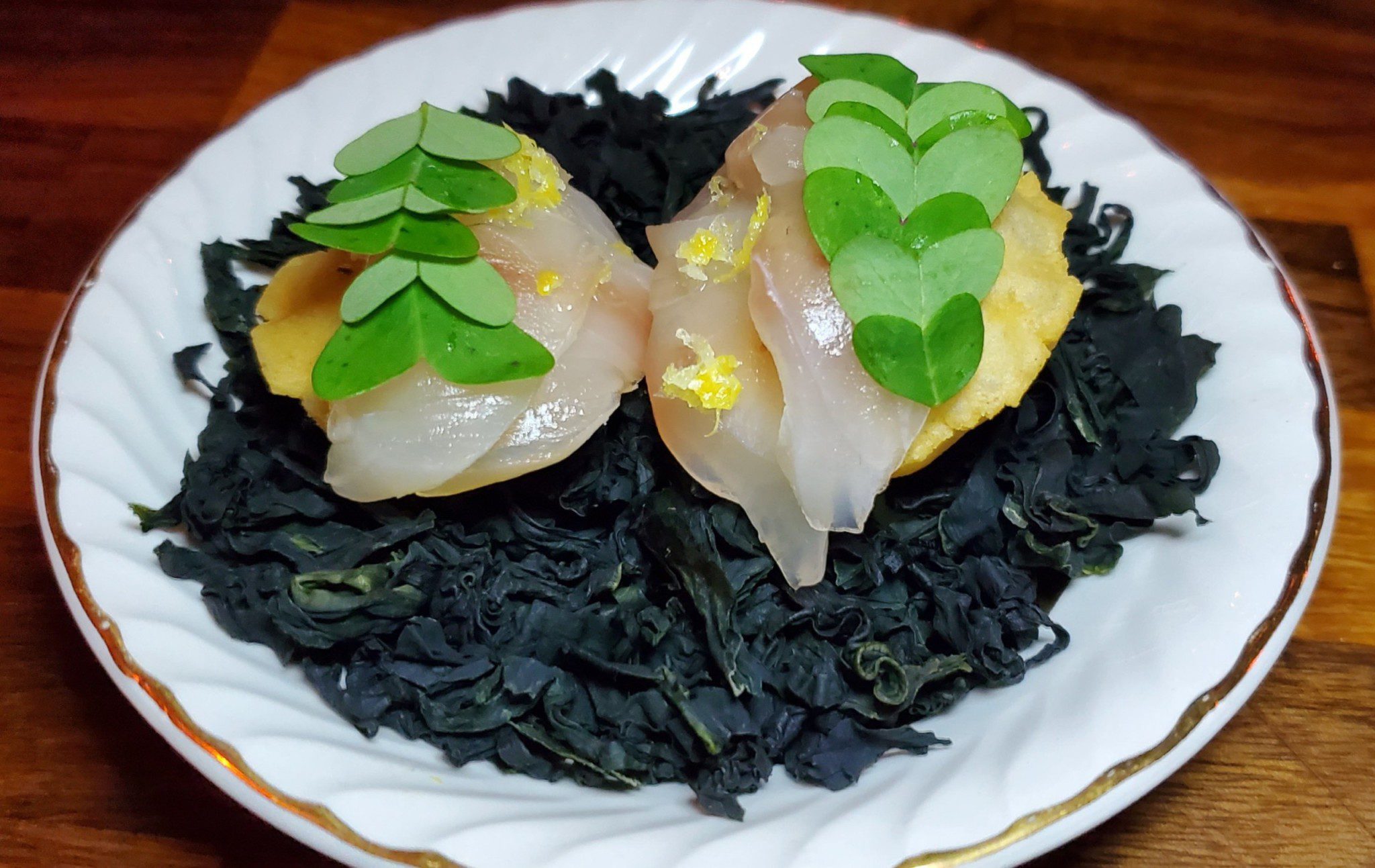 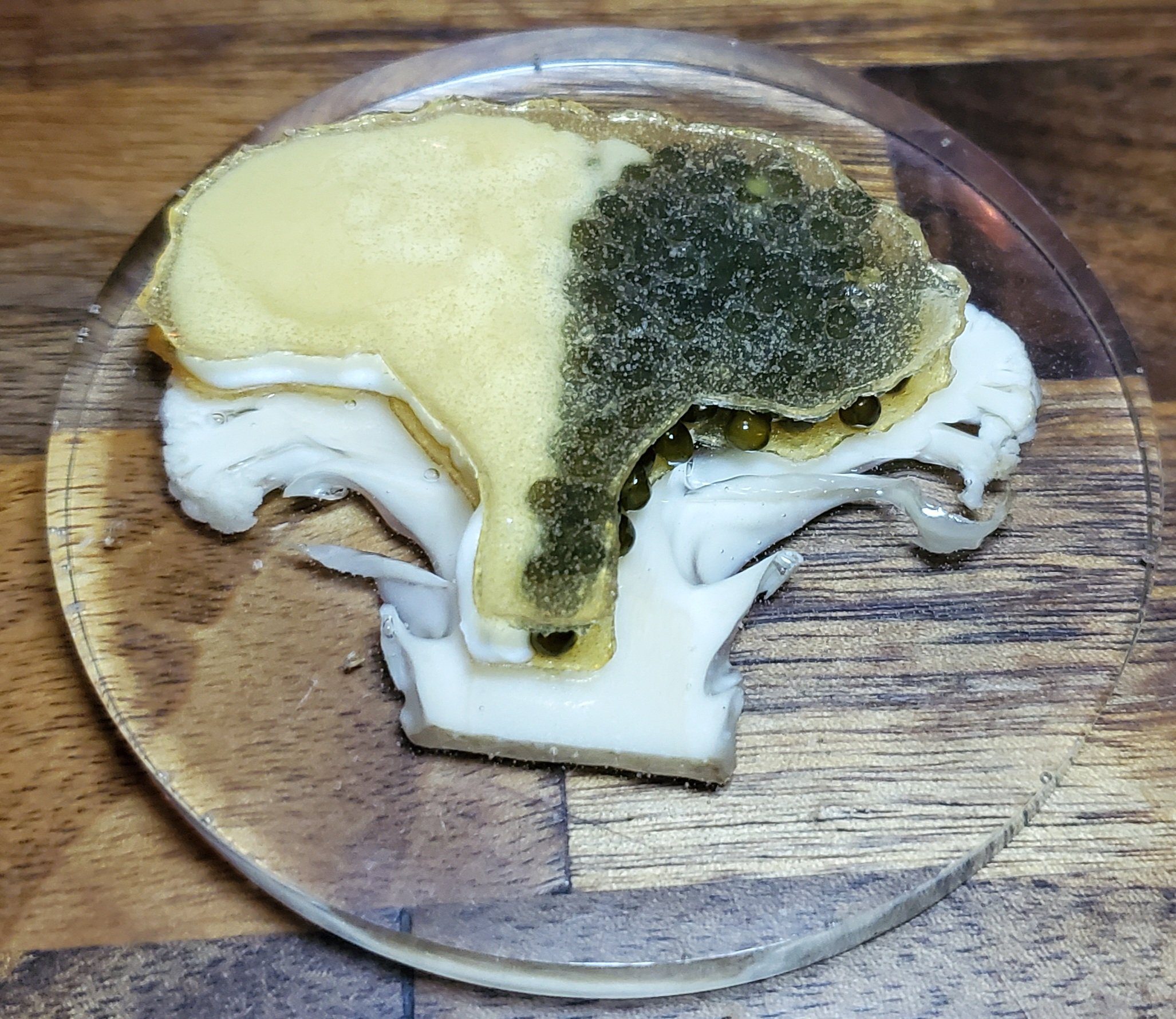 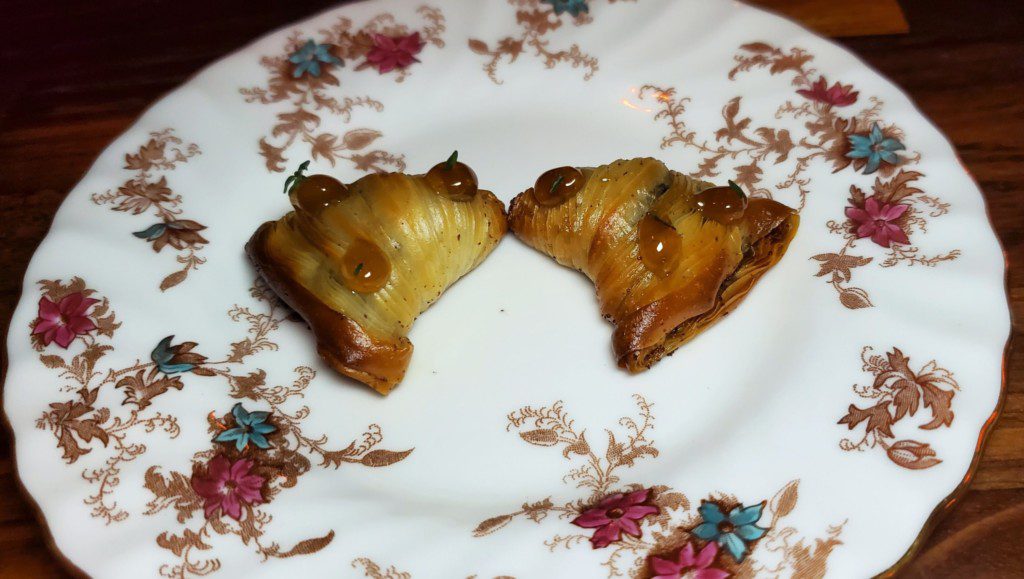 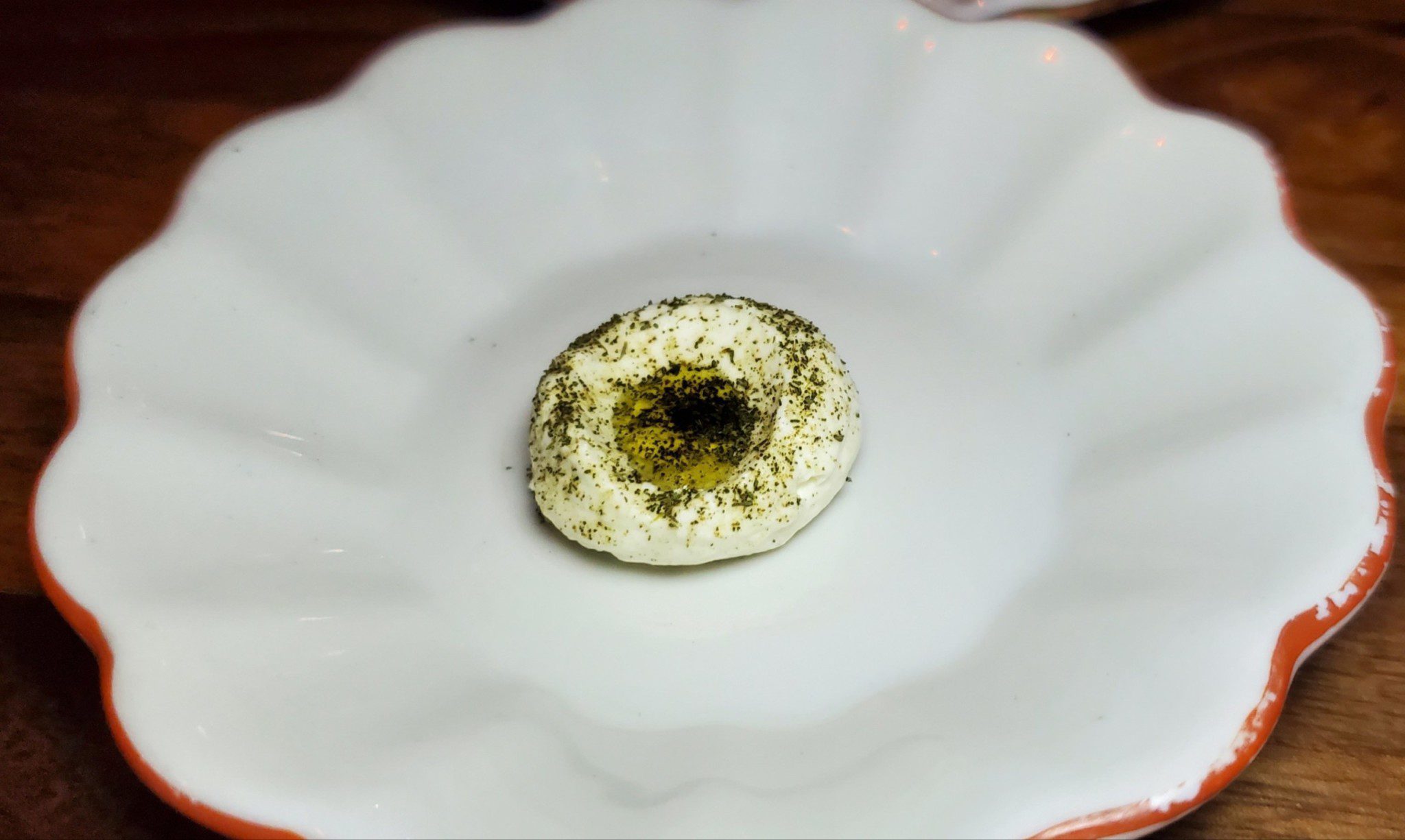 The next wine was the 2016 Paitin Elisa Arneis, Langhe DOC. I love Arneis and this one with more than five years of age still had vibrant acidity and a lovely mouthfeel. 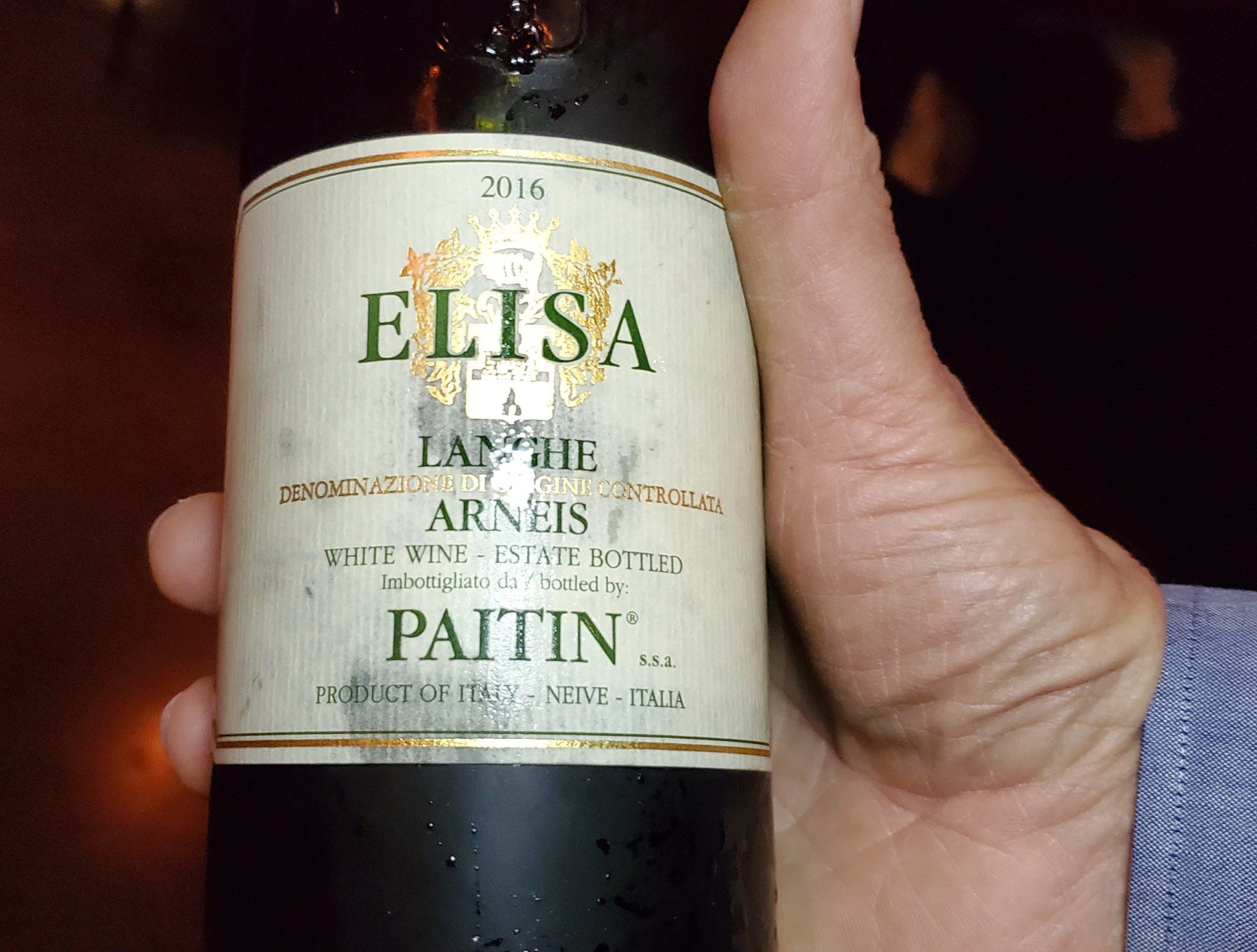 The Arneis was paired with Nopales, Jicama, Avocado with Jalapeno Cucumber Water and a cactus cracker made from spinach. The crunch of the vegetables and the delicate heat of the water were in harmony with the Arneis. 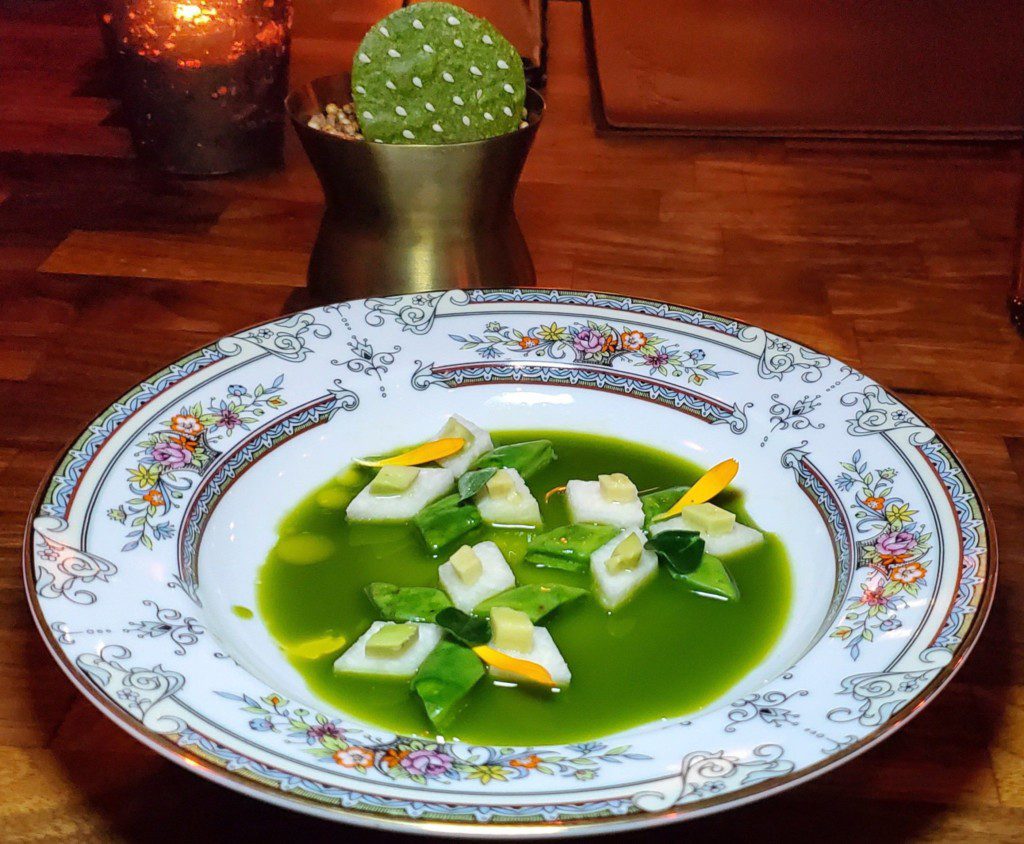 The Vereinigte Hospitien 2011 Serriger Riesling Kabinett with its crisp acidity and minerality was a spot on pairing with the next dish of Dungeness crab with citrus and apple. 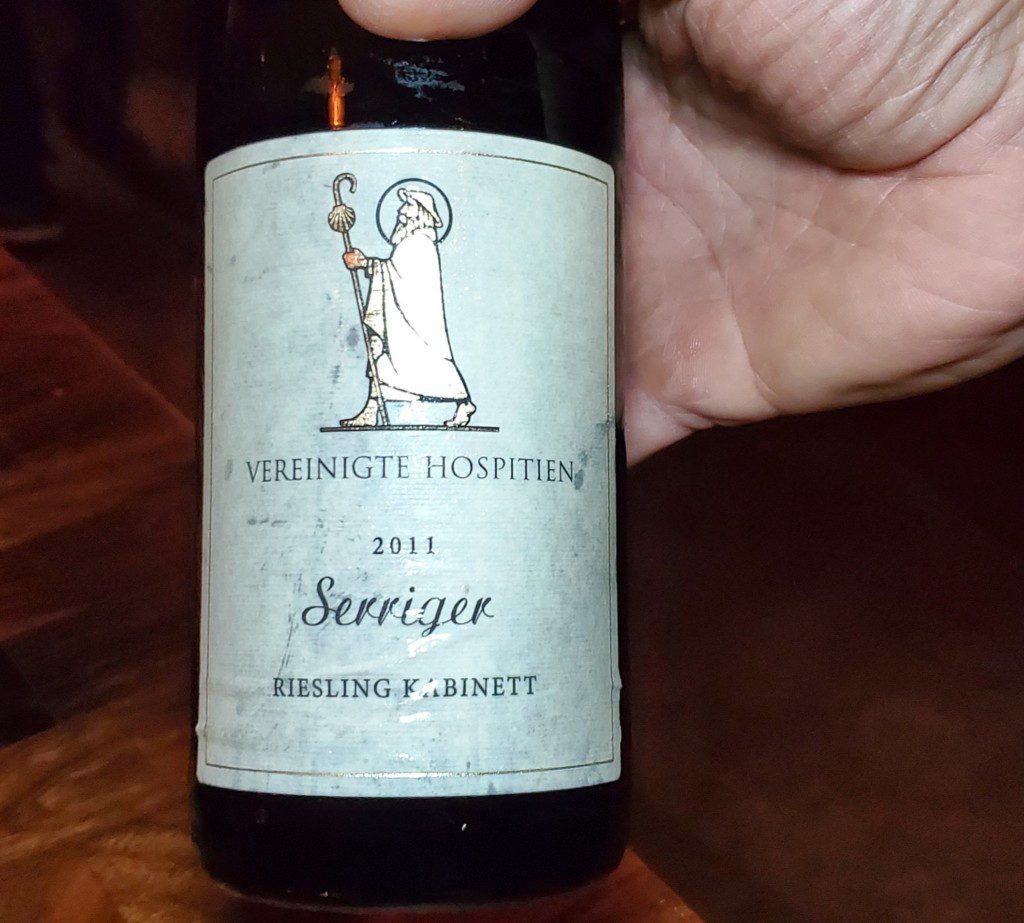 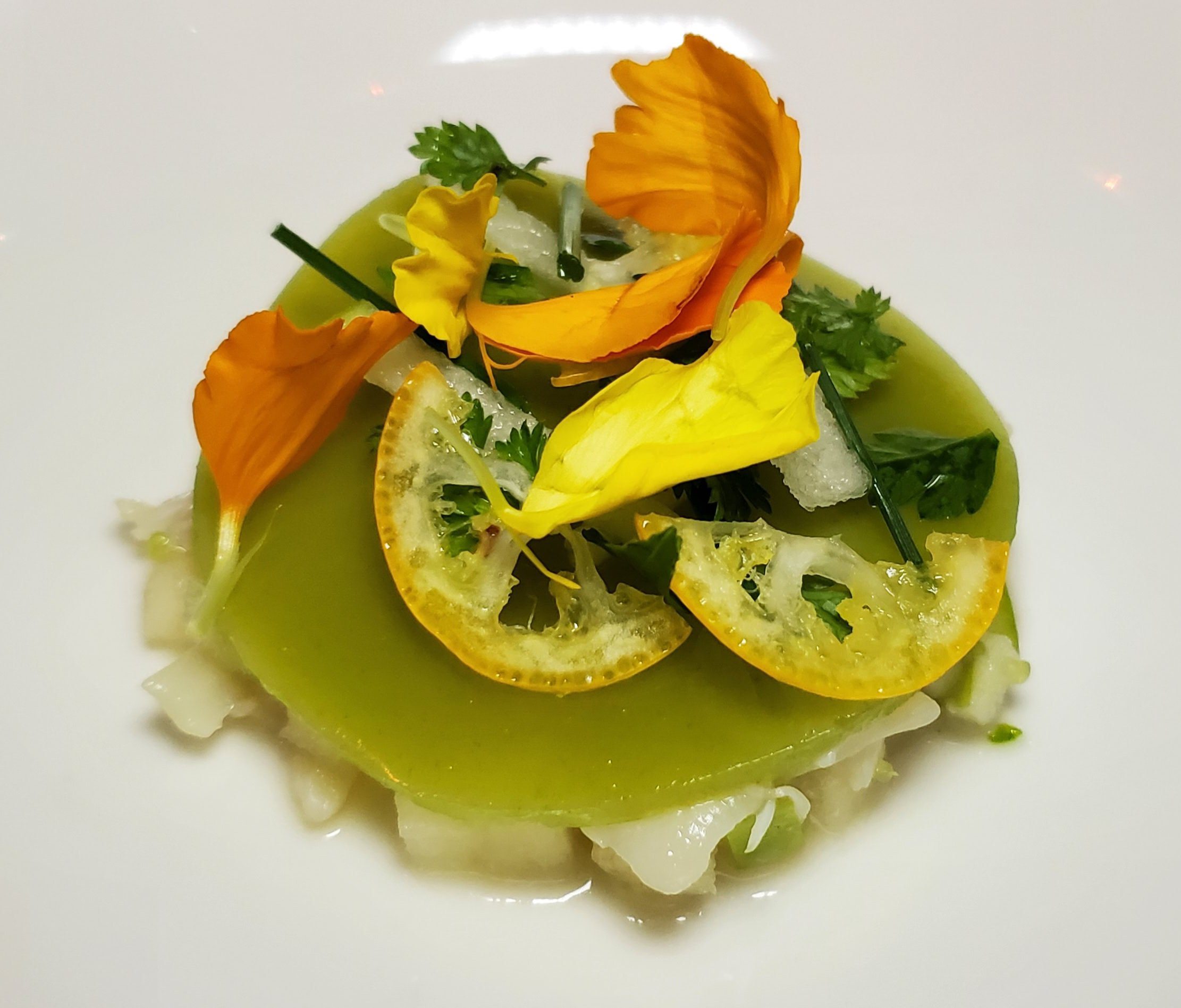 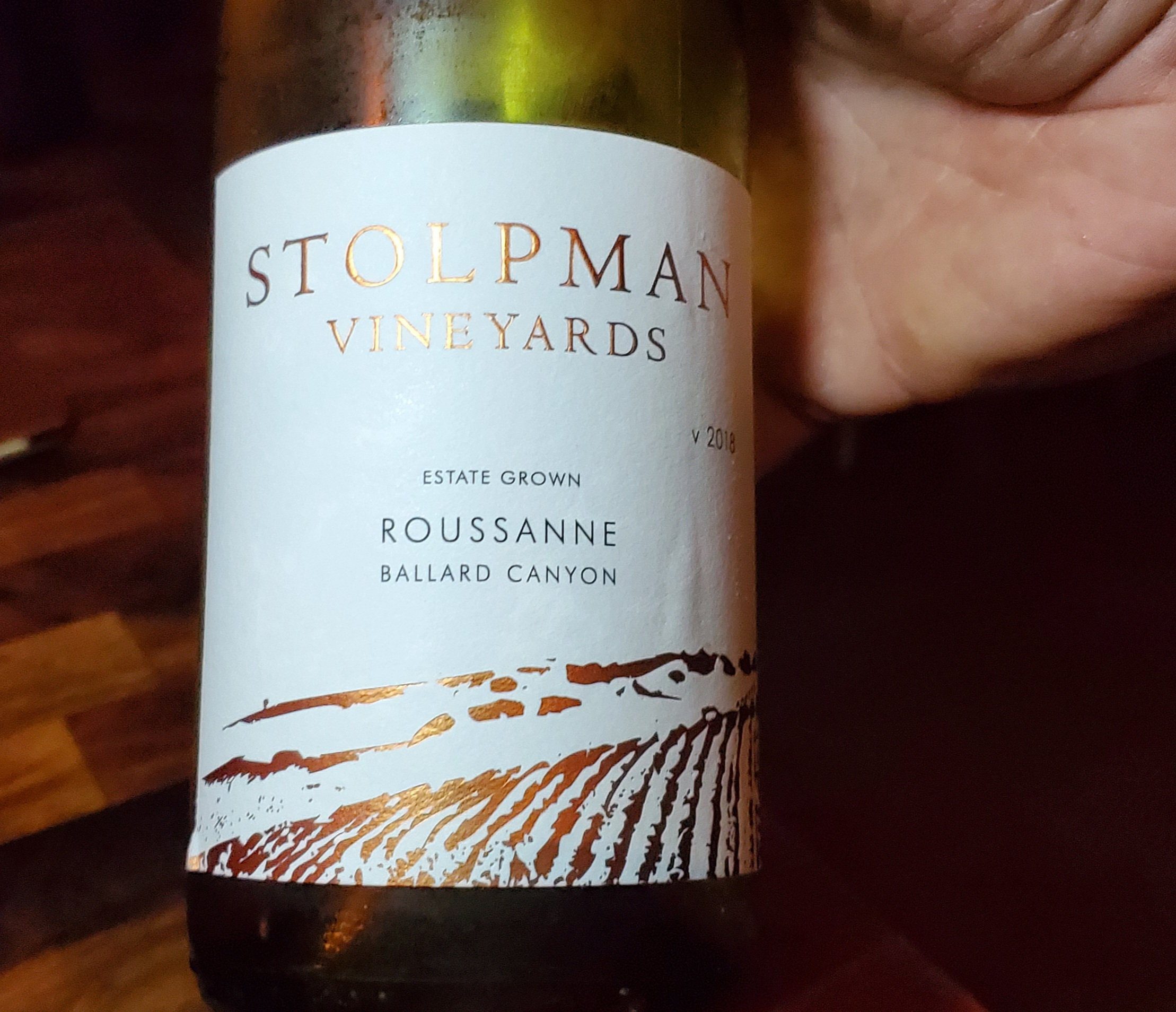 Each dish so far had has ooh-ing and ah-ing is full satisfaction, unable to say what we liked most. But this dish took it to another level. The peas popping with freshness and the salinity of the caviar was perfectly matched by the smokiness of the crème fraîche. This dish was out of this world. 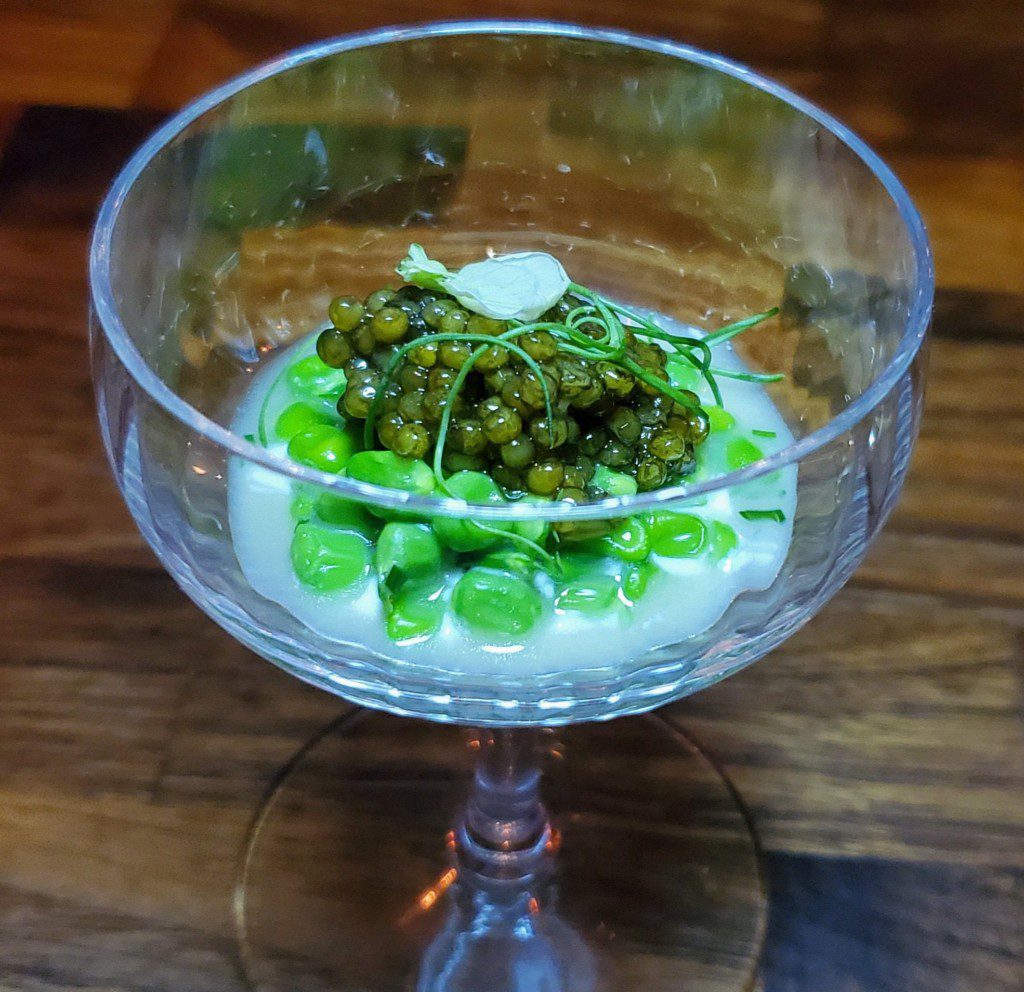 As the St. Rey 2015 Chenin Blanc, Clarksburg was poured, were were served House Made Bread and Butter. 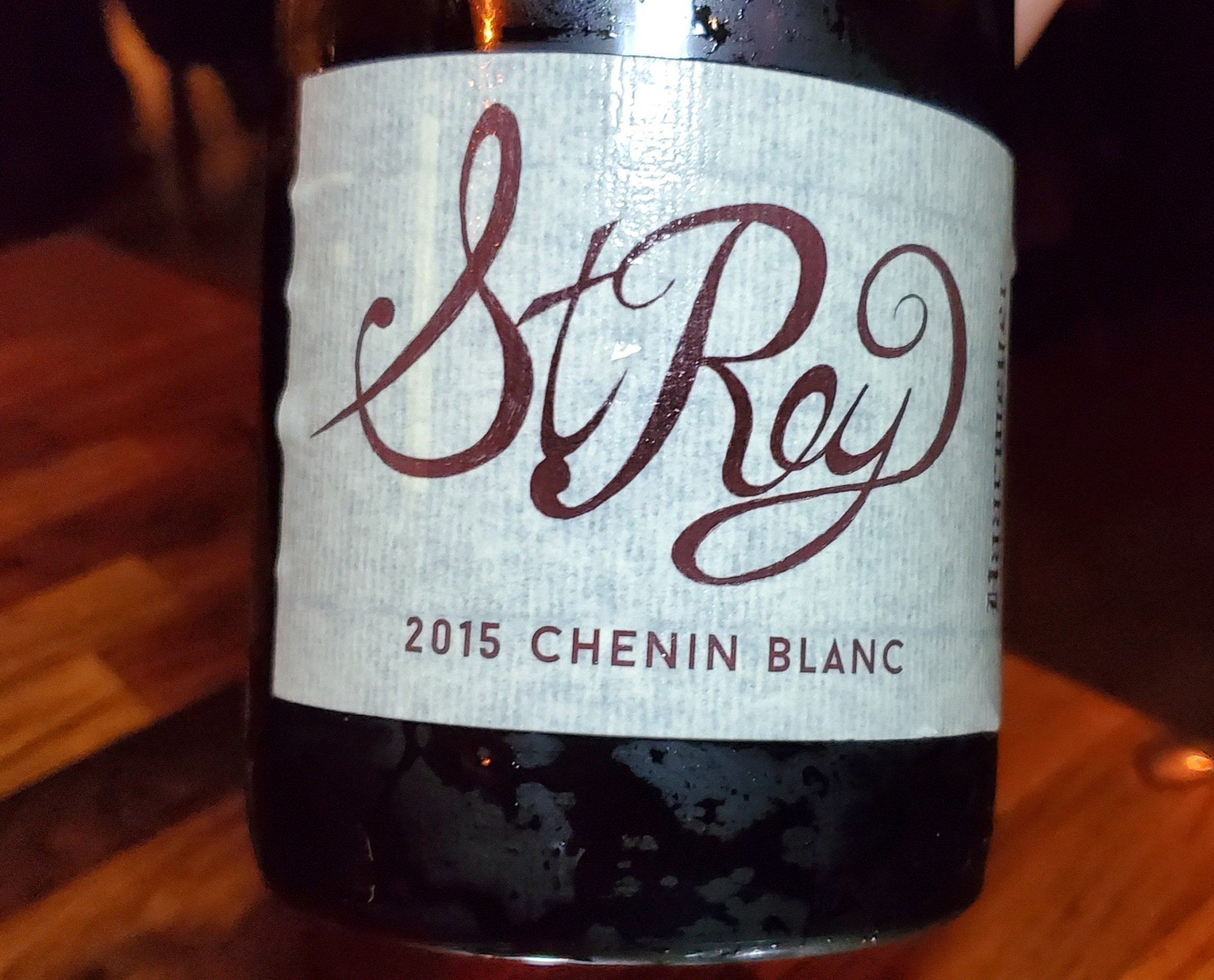 The piping hot bread had a perfectly crunchy crust and a doughy inside. The rich, creamy butter melted into the bread and it was hard not to eat the entire loaf but we were told to save the doughy inside.

And I understood why. It was to sop up the clam sauce that was poured around the Abalone with Suncoast Farm beans and ham hock. The Abalone was so exceptionally tender and delicate that it could easily have been mistaken for a mushroom or pork belly. 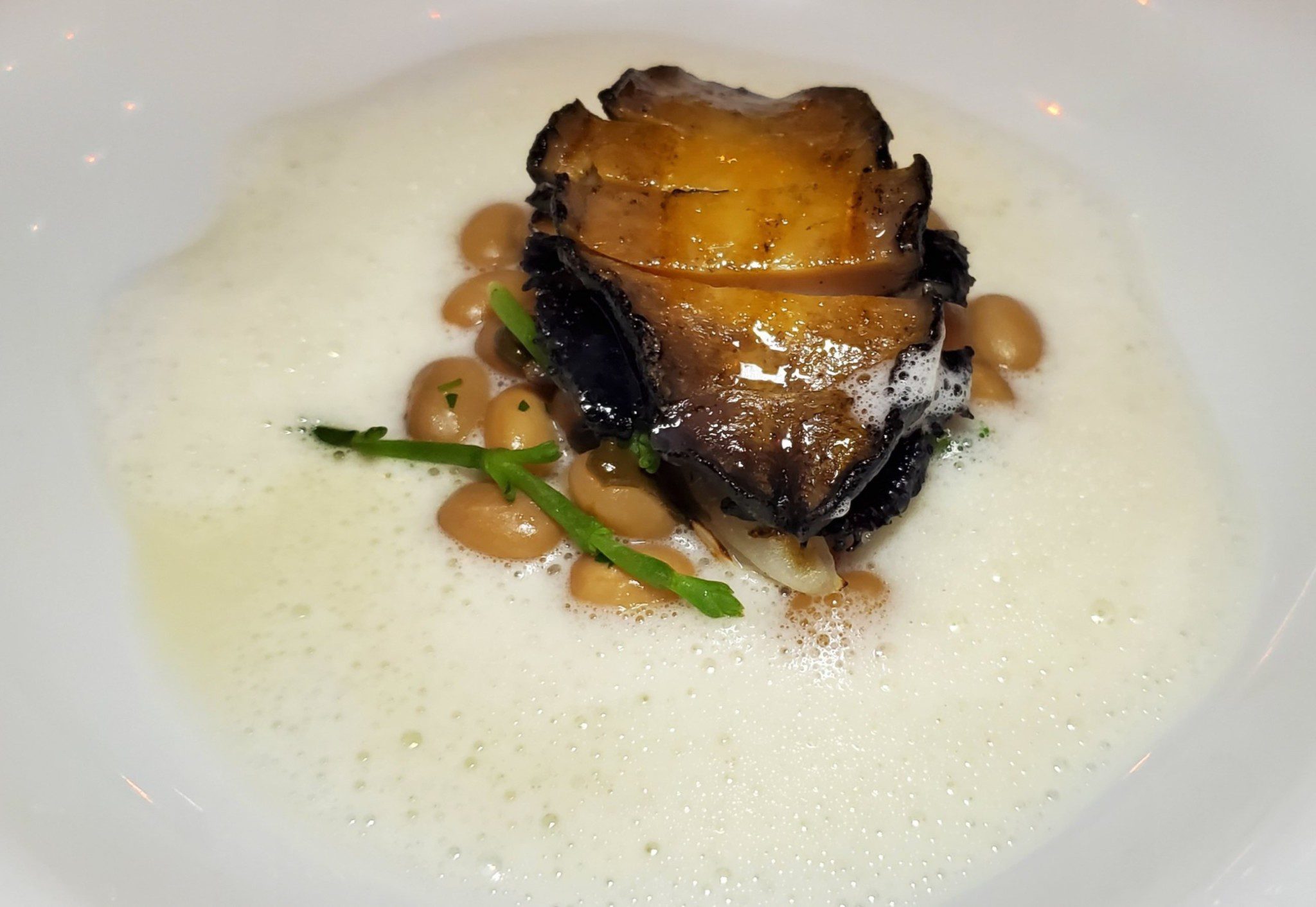 The 2014 Meurgey-Croses Viré-Clessé, Bourgogne, France was poured for the pasta course. 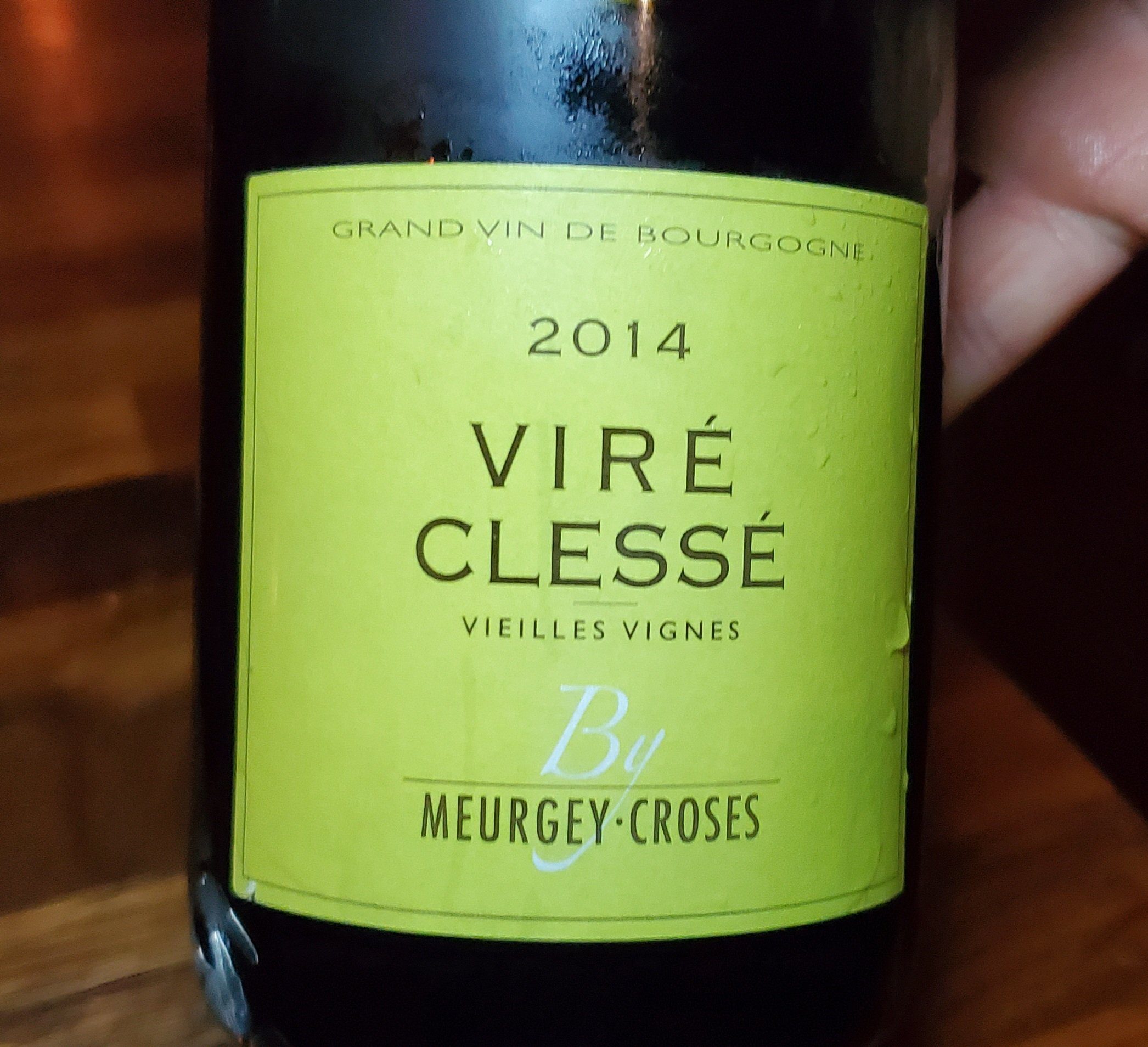 The Pasta was handmade Trofie pasta with roasted chicken jus and egg yolk jam topped with shaved black truffles. The Chardonnay had the body and acidity to match dense rich pasta. 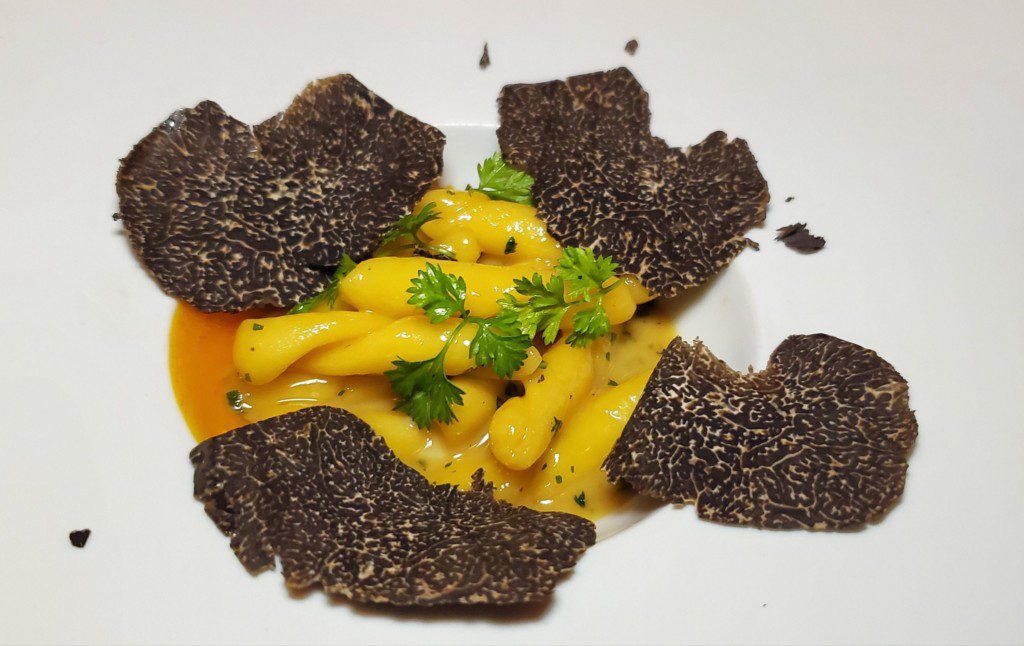