14 Jun One Hope – The Winery With A Purpose

Many companies have giving back to the community as a part of their company ethos. But one company in the wine industry has taken social responsibility to another level. The entire business of One Hope Winery is founded on the concept of giving back as I wrote about in California Winery Advisor and share here.

It is common for wineries to support charitable foundations, but One Hope Winery was founded on the concept of giving back. Since its founding in 2007, One Hope Winery has made contributions to twenty organizations totaling $8 million. “Purpose is engrained in all we do,” explained CEO Jake Kloberdanz.

One Hope Winery is the brainchild of Jake and seven friends who were in the Gallo Management Training program. While stocking shelves in a supermarket one October, Jake noticed some brands participating in a pink ribbon promotion for Breast Cancer Awareness Month. What he also noted is that the promotion was for one month only. An idea started percolating within Jake about a winery that supported causes 365 days a year.

As his idea lingered in his mind, Jake received a call from a childhood friend telling him that she had been diagnosed with blood cancer. They made a pact that she would fight her cancer and he would bring his idea to life.

Jake pitched to his colleagues at Gallo the idea of a wine that gives back. None of them came from the wine industry or had money to fund it, but they all agreed to create One Hope Winery as a charitable business. In 2007, their first wines were sourced from palates of finished wines that they relabeled and delivered on their own. But from the first bottle sold, a portion of every bottle went to support three causes – breast cancer, autism, and AIDS.

In 2009, two years after launching One Hope, co-founder Sarah McPeake met Michael Mondavi at a local event. Inspired by the company ethos, Mondavi offered his support, introducing the One Hope team to vineyards. And, in 2010, Michael’s son Robert Mondavi Jr. became the winemaker for One Hope. In 2016, Mari Wells Coyle took over as head winemaker and Robert Mondavi Jr. remains a consultant.

In October 2014, the One Hope team purchased 10 acres in Saint Helena. The property had an existing four-acre vineyard that had been planted originally by Beckstoffer, as well as permits in place and architectural renderings. A private house, designed as a modern farmhouse and called Estate 8, was built in August 2018. And, in March 2021, the rustic barnyard-designed winery opened. 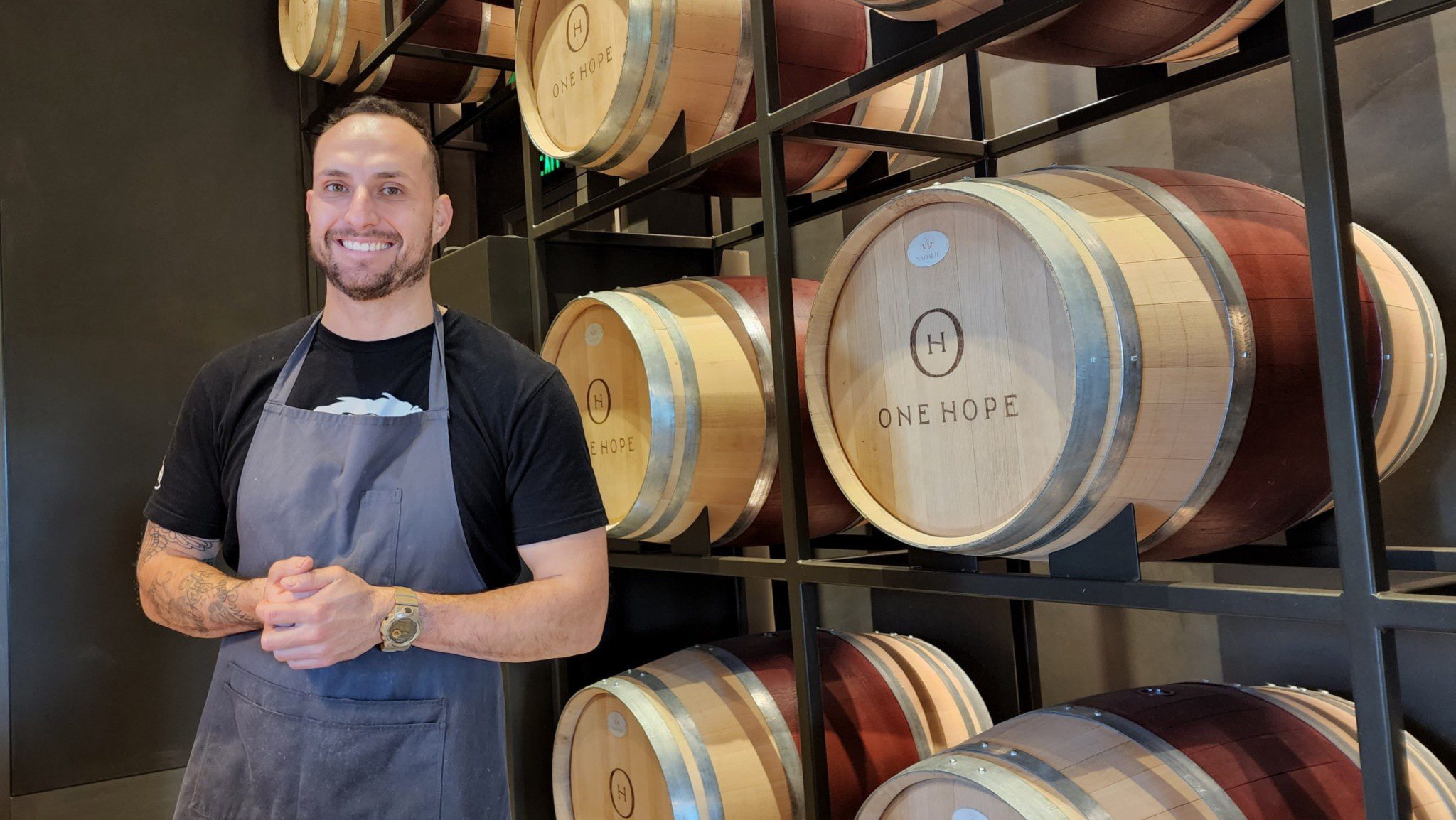 One Hope has a large portfolio of wines, a selection of which are available exclusively at the winery. These winery-only wines can be tasted when visiting the winery for a “Wines & Bites” experience. Costing $150 per person, “Wine & Bites” is a wine and food experience that includes a glass of Fume Blanc and a winery tour and ends with a tasting menu prepared by Chef Esteban Soria. 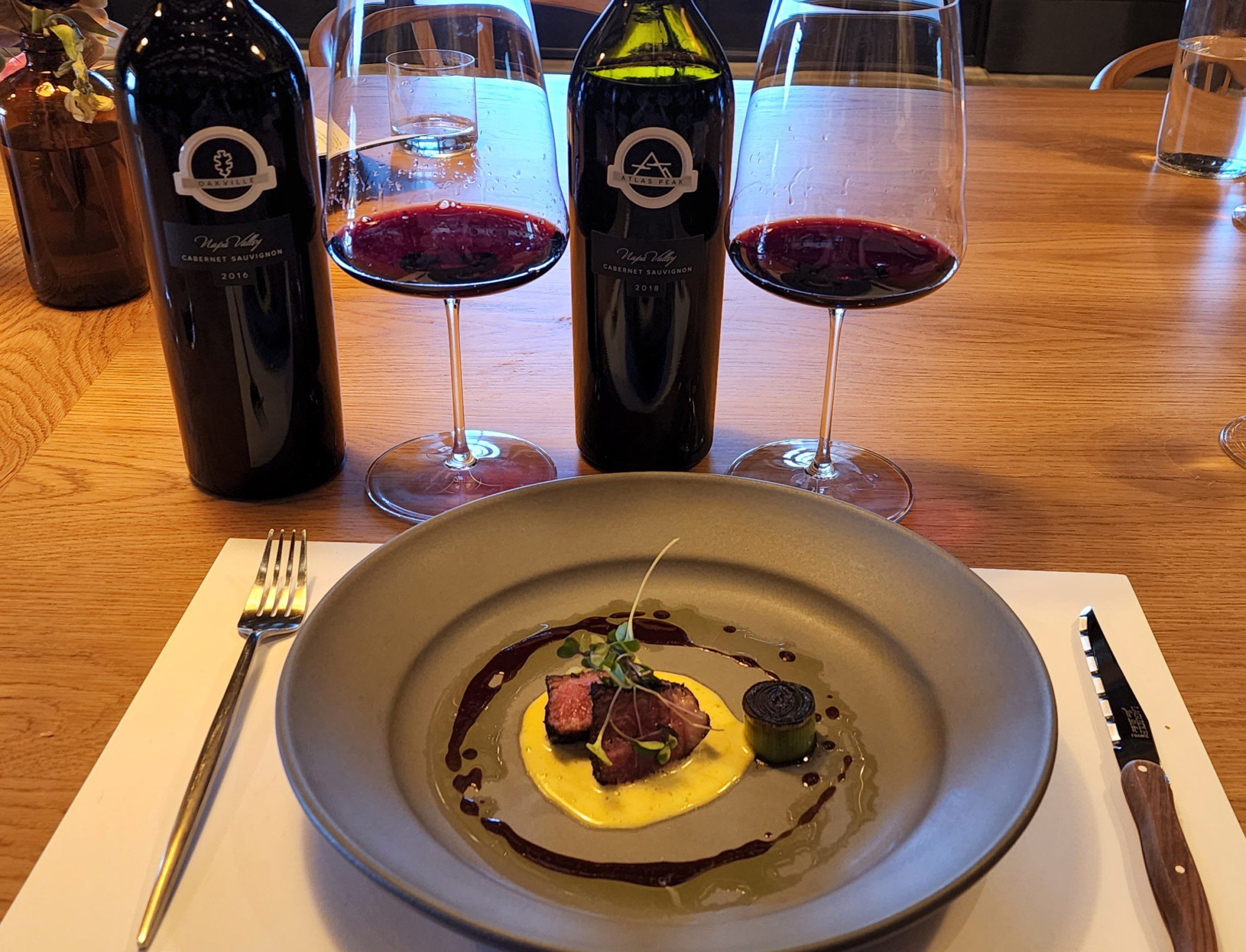 As One Hope has grown, so has its charitable side as they continue to increase its impact on the world. And to support their mission, they raise money in everything they do. One Hope offers two Wine Clubs. The basic Wine Club is like most wineries in that you get a shipment every three months. But even members of the Wine Club earn points on purchases that they can choose to donate to a featured non-profit.

The more exclusive Wine Club is the 20/20 Collective which consists of two thousand “visionaries” who are part of this purpose-driven community. An annual investment of $2500 to $10,000 includes Spring and Fall allocations, invitations to events, discounts on purchases, and experiential winery visits. And each year this community comes together each year to identify and fund twenty acts of hope. Last year they built 20 water wells.

One Hope also raises money through their annual harvest party and other winery events. At the last harvest party, a goal of $200,000 was set and One Hope exceeded their goal when they raised $350,000 which was donated to Charity: Water.

Get Involved With One Hope Winery

Fifteen years ago, two friends made a pact. Jake’s friend fought her cancer and is in remission and One Hope brings people together to share wine and give hope to the causes they care about.

This week the wine industry lost another legend, Josh Jensen. Visionary, legend, iconic....these are just some of the words used…

Summer is here and it is time to celebrate everything pink! It's National Rosé Day! Held every year on the…