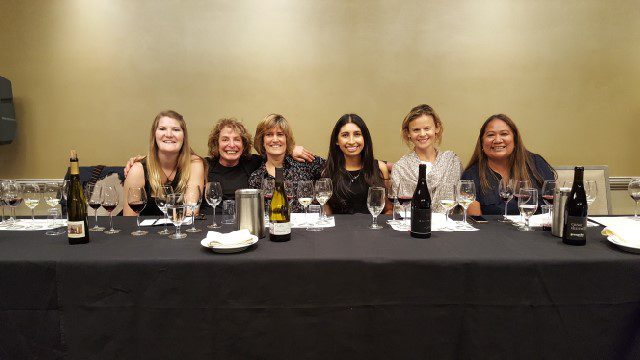 19 Oct Meet some of the Santa Barbara County women winemakers 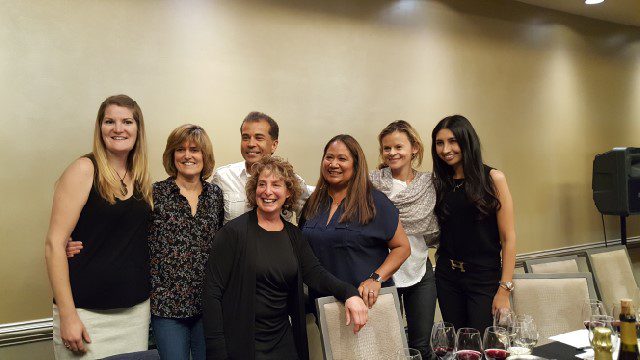 It was an opportunity for them to share their stories and talk about their wine in front of an audience of wine enthusiasts. One of the unique aspects of this seminar was that all six winemakers were women. It is not uncommon to find female winemakers in California. But, according to a 2015 survey from Santa Clara University, the reality is that out of 3,400-plus wineries in California, only 10 percent of lead winemakers are female.

Santa Barbara County is a relatively small wine region with 27,000 acres planted to grapes. It is home to 199 wineries which, on average, produce fewer than 5,000 cases each. Of these 199 wineries, at least 20 are run by women. Each one of these winemakers has a story to tell and had a wine to share.

Laura Roach has been making wine since 2008 as a laboratory intern at Schramsburg Vineyards in Napa Valley, where she was first introduced to sparkling wine production. She graduated in 2010 from UC Davis with a bachelor’s degree in viticulture and enology and was awarded the Confrérie des Chevaliers du Tastevin Scholarship to work in Burgundy, France.

She moved to Santa Barbara in 2012 and joined Sanford Winery as the enologist and later as assistant winemaker. Roach, who is younger than 30, was drawn to the diversity of Santa Barbara wine country. While she is also making chardonnay and pinot noir, her enthusiasm for sparkling wine is evident. Roach was part of launching the sparkling wine program at Sanford.

Kathy Joseph came to Santa Barbara 28 years ago and started Fiddlehead Cellars because she saw the region’s potential and she has helped the region become what it is today.

She purchased and planted her Fiddlestix Vineyard in the Santa Rita Hills in 1996 as part of the new wave of expanding what Sanford started in 1971. Joseph focuses on making wines that are textural, elegant, supple, silky and true to the variety.

As she explained, “We can make big wines and little wines in our area; the best winemakers make wine to the vintage.

“In addition to pinot noir in Santa Rita Hills, Joseph also makes sauvignon blanc from Happy Canyon AVA. When she started making those two wines, “it was considered weird,” she said. Now those grapes are commonplace.

Recently, she has planted gruner veltliner, another “weird” grape. But because of the cool climate of the Santa Rita Hills, she was curious to see what else would work.

2014 Fiddlehead Cellars Gruner Veltliner Fiddlestix Vineyard – The inaugural release of the gruner veltliner, 70 percent was fermented in neutral oak and 30 percent in stainless steel. Joseph’s goal is to make something a little shy with nice spice, something that is broad on the palate but not overwhelming. The wine has a vibrant nose of jasmine, white peach and white pepper. On the palate, it is crisp and youthful with a lingering chalkiness.

Denise Shurtleff did not go to school for winemaking but rather fell into it. She studied nutrition at Cal Poly and did not want to leave the Central Coast after graduation. She got a job as a lab technician and never left the wine business.

After 16 years at Corbett Canyon Vineyards in Arroyo Grande, Shurtleff joining Cambria in 1999 as assistant winemaker and became head winemaker in 2003.

Cambria is located in Santa Maria Valley AVA, an east/west valley with a wide expanse opening to the Pacific Ocean. As the area heats up, the wind from the ocean blows in, cooling the region. Santa Maria Valley has the longest growing season in the state of California and is an ideal location for chardonnay and pinot noir.<

2014 Cambria Chardonnay Clone 4, Santa Maria Valley – Cambria offers five different bottlings in the chardonnay program. The Clone 4 chardonnay comes from the oldest vines on the property that are good, strong and own-rooted. The wine has aromas of tropical fruit, citrus and vanilla and is full-bodied with balanced acidity.

Erika Maldonado is the daughter of Abel O. Maldonado, the 48th lieutenant governor of California. More than a decade ago, her family purchased 16 acres next door to Bien Nacido Vineyard in Santa Maria Valley.

At 16, Maldonado informed her father that they were located next to one of the top 10 vineyards in the world and should plant vines. Her father told her to do the research and come back to him.

So she did that, and in 2008, while she was a freshman at Cal Poly, they planted 15 acres of pinot noir and chardonnay and one acre of pinot gris.

Maldonado did not know at the time if she wanted to make wine but she knew it was a smart business decision. But while studying business in college, she fell in love with wine and took a job with winemaker Paul Lato who taught her how to feel the wine and feel the vineyard. Runway Vineyards is a family business, named for the women in her family’s love of fashion and the men in her family’s love of aviation.

2012 Runway Pinot Noir, Santa Maria Valley – Maldonado focuses on letting the vine speak and being gentle in the winery. The resulting wine is a classic expression of Santa Maria pinot noir with aromas of wild berries and brown spice and a silky finish on the palate.

Sonja Magdevski studied political science and received her master’s degree in journalism in Michigan, followed by a Fulbright Scholarship to the Republic of Macedonia to study ethnic issues.

Working as a journalist, she began making wine as a garagiste in Malibu in 2004. By 2008, Magdevski was a commercial winemaker, producing just over 1,000 cases per year. Magdevski was one of the pioneers who made her home in the tiny town of Los Alamos. As a single owner/operator, Magdevski focuses on uncovering great vineyards to source fruit for her Rhone-focused program. Five years since opening its doors, Casa Dumetz is not only a popular tasting room, but also home to the Words to Live By Speaker Series, an weekly open forum for sharing and discussion.

Tara Gomez was born and raised in Santa Barbara Country and is a member of the Santa Ynez Band of Chumash Indians. She was one of two women to graduate with a Bachelor of Science in enology from Cal State University Fresno in 1998.

Gomez has worked in San Luis Obispo County and Spain and returned to Santa Barbara County in 2010 when her Chumash tribe bought 1,4000 acres of Camp 4 from Fess Parker. She convinced her tribe to make wine and in 2010 she made one ton each of syrah, grenache and cabernet sauvignon. Six years later, Gomez’s confidence has grown and she is giving back to the land through sustainable farming and giving back to her tribe.

2013 Kita Cabernet Sauvignon, Santa Ynez Valley — Gomez had many critics telling her that she should return to Paso Robles if she wanted to make cabernet sauvignon but Gomez was determined to make it in Santa Barbara County. She is particular about the grapes she picks, leaving many unworthy grapes on the vine. The resulting wine is deep colored with a nose of black current, boysenberry, tobacco and clove.

This post originally appeared in Wine Tourist Magazine Exactly forty years ago, in 1976, a blind tasting was held in…