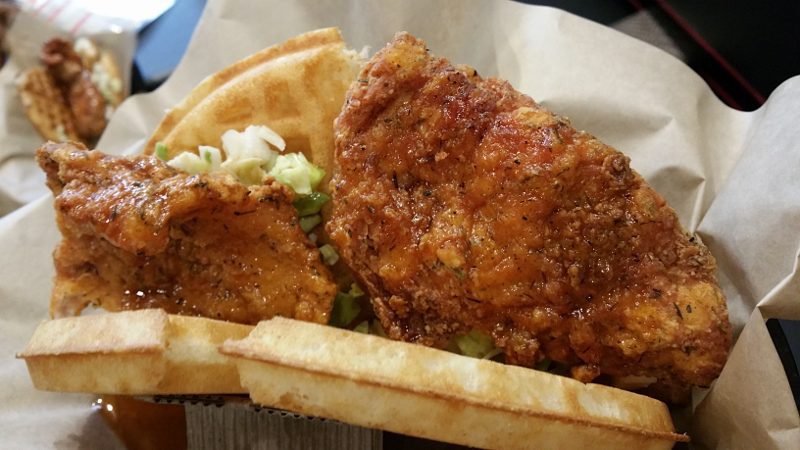 02 Jun Just Put It In A Waffle at Bruxie

Typically we eat waffles for brunch. Or for a savory note, some eat chicken and waffles. But just about anything can be paired with a waffle. Next time you are eating a sandwich, why not put it in a waffle? That is what they are doing at Bruxie.

Bruxie is a new take on the sandwich. Founder Dean Simon fell in love with waffles when he was in Brussels. He came back to California and since he could not find light, airy, crispy style waffles, he began testing recipes until he created a recipe that matched what he ate in Brussells. Then he put quality seasonal ingredients in them to make sandwiches, both savory and sweet.

Simon and business partner Kelly Mullarney, both chefs, opened the first Bruxie in the historic Old Towne of Orange in 2010 and it became the busiest restaurant per square foot in the nation. Now with six restaurants in Southern California and one in Las Vegas, Bruxie is showing people that waffles are no longer just for breakfast.

Bruxie sandwiches are not sweet. They are yeast risen waffles that are light, airy and crispy and will remind you of warm toasty bread. But, they weigh only three ounces and contain 250 calories. They are rather guilt free….until you start adding the savory or sweet ingredients. But who cares when they taste so good!

If you like chicken and waffles, that is what you will get with the Buttermilk Fried Chicken (seasoned fried chicken breast, chili honey, cider slaw). The batter on the chicken breast is crunchy and the sweet spice from the honey plays nicely with the tart cider slaw. The Buffalo Bleu Chicken (Spicy! fried chicken, buffalo sauce,crisp vegetable slaw, bleu cheese crumbles) is for those who want more of a kick in their sandwich. As french fries or chips are what you normally pair with a sandwich, the Irish Nachos (waffle cut fries, Bruxie cheese sauce, applewood bacon, sour cream, chives) are what to get at Bruxie. Of course, you can make a meal just from this one dish.

On the sweeter side, the Lemon Cream and Berries has a nice balance of sweet and tart. But for the real sweet tooth, try the Belgian Chocolate S’Mores.

Although we had sweet waffles for dessert, I could not resist a Mint Chocolate Shake made with Wisconsin Frozen Custard.

Or you can get a Creamsicle or Black Cow Float. With seven locations and counting, Bruxie is great for any time of the day –  breakfast, lunch, dinner, mid-day snack, dessert or a late night treat. Just remember, put it in a waffle.

Heading to the beach for the day or just driving up the coast? If Malibu is where you are headed,…

On May 25, 2016, The Abbey celebrated its 25th Anniversary. Long a mainstay bar in the heart of West Hollywood,…

On May 25, 2016, The Abbey celebrated its 25th Anniversary. Long a mainstay bar in the heart of West Hollywood,…