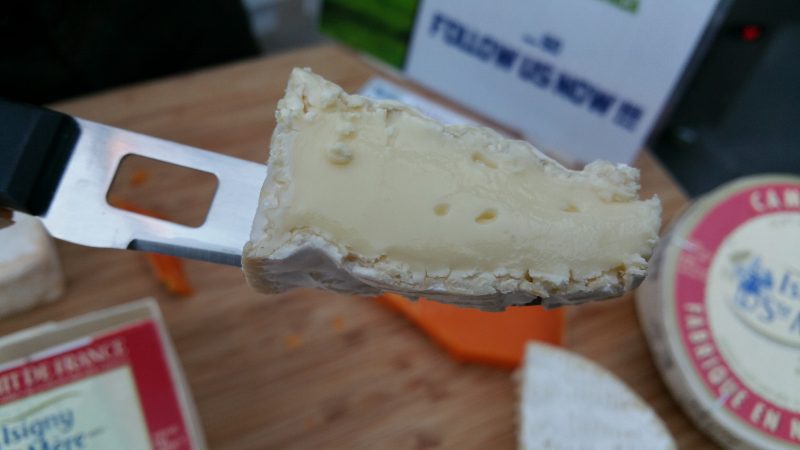 20 Jan Getting To Know French Cheese

Creamy, semi-soft, hard, cow, sheep, goat….so many cheeses to choose from! I love cheese. Who doesn’t? And, like wine, when you have really good cheese, you can taste its terroir, where it is from. But, it can be intimidating or overwhelming when it comes to really understanding French cheese. There are 350-400 types of French cheese, and with many varieties within each type, there may be more than 1000 different types of French cheese.

Have no fear! Cheeses of Europe and the French Cheese Board are here to help. Their mission is to create awareness about the variety of the cheeses of France available on the US market and the multiple ways that American consumers can incorporate the cheeses into their diets, their recipes and their lifestyles. One of the ways they do this is by creating pop-up stores in cities, like they did recently in Santa Monica. An outdoor pop-up store was created in the center of Santa Monica Place and for one day consumers could taste cheese (for free) and buy cheese (at great prices).

Here are some of the cheeses we tasted and learned about:

Normandy is located in the north of France and Normandy cows produce milk higher in protein and fat. After the cows are milked, a culture is added and a cream develops which matures for 18-24 hours and is then churned to make exquisitely creamy, rich butter.

A hard cow’s milk cheese, it is cave-aged for 18 months. The cheese is orange in color because annatto was added for color as Louis IX wanted to differentiate it from gouda. Mimolette is shaped liked a cannonball with a pitted, crusty rind formed because of mites that eat the rind of the cheese, allowing moisture into the cheese. The result is a nutty, fruity cheese with hints of butterscotch. Cows milk cheese from the Ile de France, located in northern France. At 60% fat, brie has a pale, straw-colored paste and a thin rind of white mold. It is soft and creamy with full, mellow flavor and rich aroma. Cows milk cheese from Normandy that has a washed rind. It comes in a square shape with slightly orange-brown coloring. The texture is smooth and gets creamier with age.

Cows milk cheese that also comes from Normandy, it is dusted witha white mold. At 45% fat, Camembert ripens from the outside to inside. The creamy, butter-texture cheese is stronger in flavor than Brie. A fresh cheese made from pasteurized milk with guerande salt added. This spreadable cheese is a soft, airy cream cheese.

From the Rhone Alps, this is a double cream from cows milk that tastes like a triple cream. It looks like Brie but the higher fat content makes it creamier.

A Morbier-style cheese produced in the Jura Mountains, this cows milk cheese has a line of wine lees running down the center of it. While it is for decorative purposes only, it represents the tradition in the 19th century of separating the milk from the morning milking from the milk from the afternoon milking. The flavor of the cheese is mild mild and silky with a hint of fruit and a nutty finish. A sheeps milk cheese produced in south-western France, in the Northern Basque Country and in Béarn, it is one of only two sheep’s milk cheeses granted PDO (AOC) status in France. A firm cheese that is smooth and creamy, it is great with a little blackberry jam on top.

There are many types of cheeses made from goats milk. There is a chalky, tart log that is perfect to crumble on salads and a creamy mousse that spreads easily on bread. There is the delicate, smooth and mild goat brie that is a little earthy on the finish.. And there is the Boucheron, a goats milk cheese that is chalky in the middle and creamy outside with a fruity finish. A cows milk cheese that is a creamy, mild, semi-soft cheese, originally made by Trappist monks. Similar in look to Munster but it has more of a bite and a less rubbery texture.

A cows milk cheese from the Franche-Comte region, Comte is aged at least 4 months and has a hard, yellow-brownish rind. The flavor is a creamy nuttiness with a little fruitiness and sweetness on the finish.

A semi-hard cows milk cheese, it is very similar to Swiss cheese with a sweet and nutty taste.

A sheeps milk blue cheese from the south of France, it is white, tangy, crumbly and slightly moist, with distinctive veins of green mold that provide a sharp tang. Roquefort was the first cheese to receive PDO [Protected Designation of Origin] status in France.