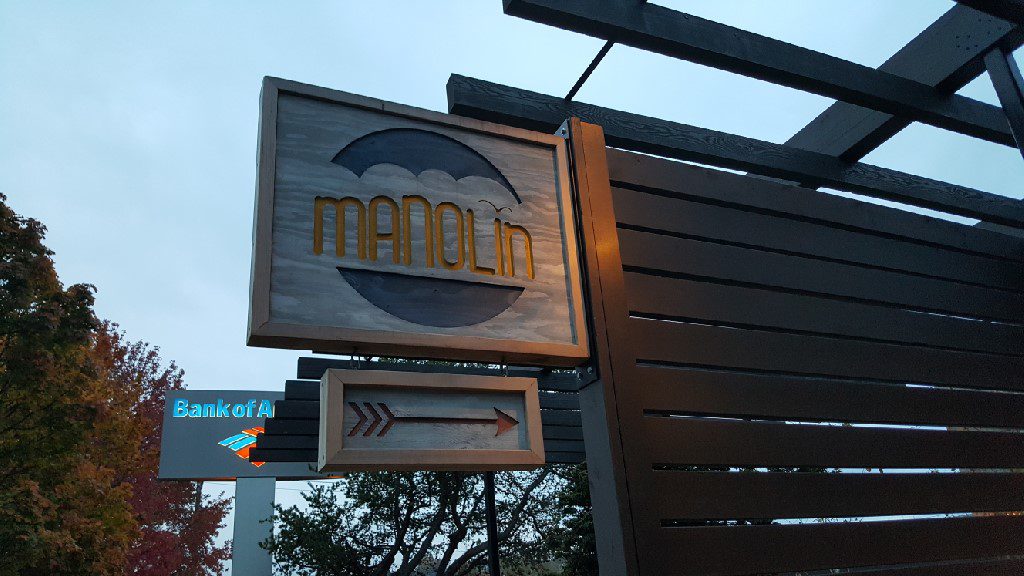 Recently I was heading to Seattle for work  It was a short trip. I had three nights and had planned to see friends in my free time. Then, in mid-flight, my friend who I was supposed to catch up with had to reschedule our dinner. I had been counting on her to pick the place as she is a local. But now I found myself on a Sunday afternoon, flying into a city with no plan and no ideas. So, I jumped online and read through Eater Seattle’s Top 38. A few places caught my eye, one of which was Manolin.

I checked into my hotel downtown and the concierge said it was twenty minutes away and wanted to suggest closer restaurants. But, I stuck to my plan and called Uber. Ten minutes later, I was in Fremont, a popular Seattle Neighborhood.

Manolin is named after the young apprentice to Santiago’s wise fisherman in Hemingway’s The Old Man and the Sea. The restaurant, which was named one of Bon Appetit’s Best New Restaurants when it opened in 2015, features the maritime pleasures of the Pacific Northwest.

The blue-tiled walls and white counter-top set a casual and inviting tone and will transport you to somewhere along the coast. The no-reservations, just walk-in mentality adds to the casual, friendly vibe. The big open bar dominates the space and the majority of seating is along the bar. There are a few tables along the perimeter.

I grabbed a seat in the center of the counter where I could watch the cooks and bartenders at work.

The menu is succinct and ever-changing. There is one snack to start with and then four fish, three garden, four grill and two dessert options to choose from.

Wine – The wine list is French-dominant with a few wines thrown in from Spain, Germany, Italy, Slovenia, Austria, Oregon and of course, Washington. The list is interesting and creative, featuring small producers. These are wines that are meant to pair with the food dishes.

Snacks – With only one option for snacks, the plantain chips with salt and pepper are perfect to start with but to also snack on throughout dinner.

Fish – The fish options are ceviche-style but with unique combinations of ingredients and flavors.

Rockfish ceviche, avocado, sweet potato, lime, chili – The crispy sticks of sweet potato added crunch while the chunks of poached sweet potato added sweetness. After a bite, I was hit by the acid from the lime and then soothed by the creaminess of the avocado. I paired this dish with a glass of the Domaine du Pas Saint Martin Chenin Blanc Saumur, France 2015 whose richness rounded out the acidity of the dish.

Albacore, watermelon, jowl, marigold – Fat, sweet and spice meld together for a perfect combination. The sweetness and the juiciness of the watermelon and the salty crunch of the thin, crispy pork jowl were unexpected pairings with albacore but it all works. For this dish, I had a glass of the Slavcek Sivi Pinot Grigio, Slovenia 2015 which had more tannin due to the juice spending time on the skins. The lighter bodied wine let the albacore sing and then the sweetness of the watermelon completed it.

Grill – I was torn between the Black Rice and Squid and the Grilled beef, with potato, radish, lardo and colatura. I opted for the beef when I saw a plate pass me by on its way to another table and then heard the magic words “brown butter.” The colatura is a fish sauce and it is combined with brown butter. The meat was flavorful and cooked perfectly. There was a big swirl of lardo on the plate, and while some love lardo, it was too rich for me. I paired the beef with the fruity and velvety Antica Casa Scarpa Rossoscarpa, Monferrato italy 2011, a blend of mostly dolcetto with a little ruchè.

My night at Manolin was quite happenstance but next time I am in Seattle, I will make a plan to go back.

Carménère for the Thanksgiving table

This story originally appeared in the Napa Valley Register. For many wine enthusiasts, picking wine for the holiday table is…

This story originally appeared in the Napa Valley Register. In 1983, while working at The Water Club in New York,…

It was 5:30pm on a Friday night. A table, two white chairs and a white tablecloth were ready to go.…