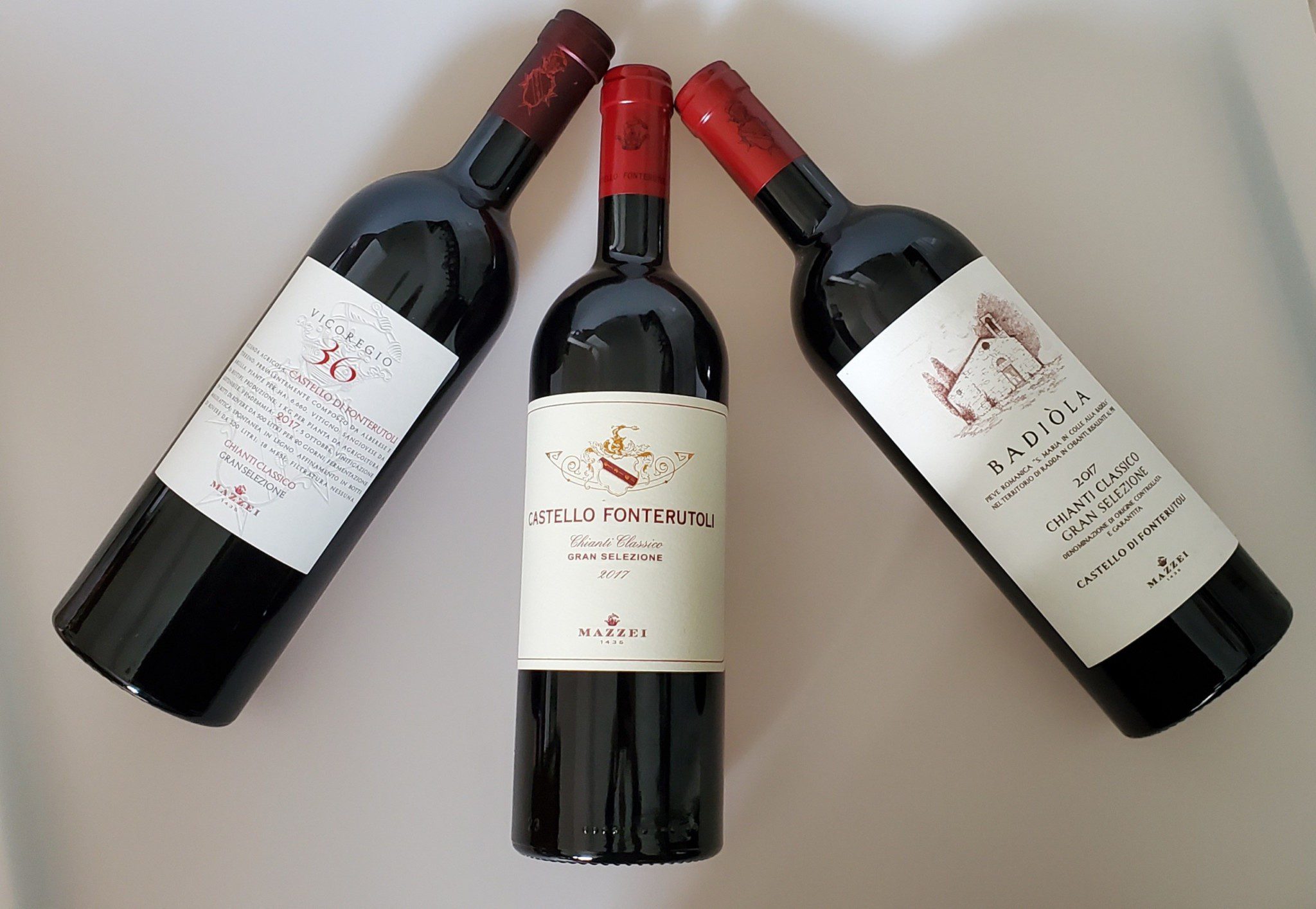 Posted at 10:41h in Wine by Allison Levine
0 Likes
Share

Every grape expresses itself differently based on the soil and climate where it is planted. Not all Chianti wines taste the same, just as not all Bordeaux wines taste the same. Castello di Fonterutoli, located in Chainti Classico, has released three new Gran Selezione wines which are three Sangiovese wines from different vineyard sites. These are wines that represent the unique terroirs they come from, expressing the diversity of Sangiovese. I wrote about the diversity of Sangiovese for Alcohol Professor and share here.

Sangiovese, meaning “the blood of Jove,” is the most planted grape variety in Italy. Chianti DOCG, Chianti Classico DOCG, Brunello di Montalcino DOCG, Rosso di Montalcino DOC, Vino Nobile di Montepulciano DOCG, Carmignano DOCG, and Morellino di Scansano DOCG are all wines made from Sangiovese.  Defined by tart red fruit notes, as well as aromas of dried roses, savory herbs, tomato, tobacco, smoke, clay, and leather, the climate and soil will impact the final flavors of the wine. This single grape variety, found throughout Tuscany, will have a different taste from one region to another and can range from a fruit-forward wine with bright acidity to an earthier wine with intense tannins.

The Diversity Of Sangiovese

Originally from Florence, the Mazzei family dates to the 11th century. The first record of Chianti as a wine production region was in a document in 1398. Ser Lapo Mazzei, a notary and connoisseur of wine who was considered the “father of Chianti”, purchased six barrels of Chianti wine from Francesco Datini, a merchant from Prato. Almost 40 years later, in 1435, Ser Lapo Mazzei’s granddaughter Madonna Smeralda Mazzei married Piero di Agnolo da Fonterutoli and Castello di Fonterutoli became part of the Mazzei family’s estate. 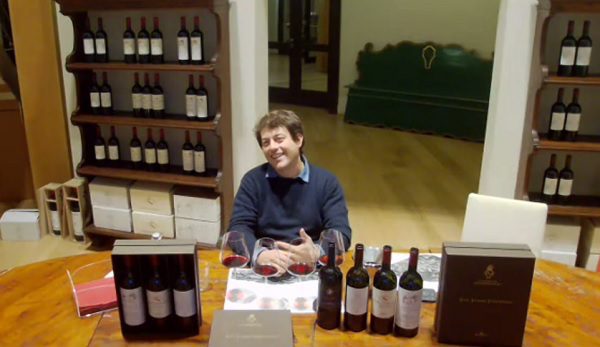 Giovanni Mazzei, a 26th generation member of the Mazzei family explained, “For the last 50 years, we have been dedicated to research to better understand Sangiovese’s evolution. We have an articulated estate with so many differences from one location to another. The vineyards range from two meters above sea level to almost 600 meters with different terrain and different climates. You cannot have just one solution for everything. It is a massive puzzle! There is beautiful diversity in this region, with each district exhibiting its own characteristics. Our aim is to reflect the viticulture of the region.”

Beginning with the 2017 harvest, the Mazzei family launched a new approach to its Sangiovese-based range of wines, with the aim of highlighting the biodiversity of the three terroirs in three Chianti Classico Gran Selezione wines.

Gran Selezione: Best Of The Best

Mazzei is one of the first producers to produce three separate crus from three different districts. Within each district, Mazzei added, “you can see the difference in how the places, with the complexity in terms of soil, impact the wine.” 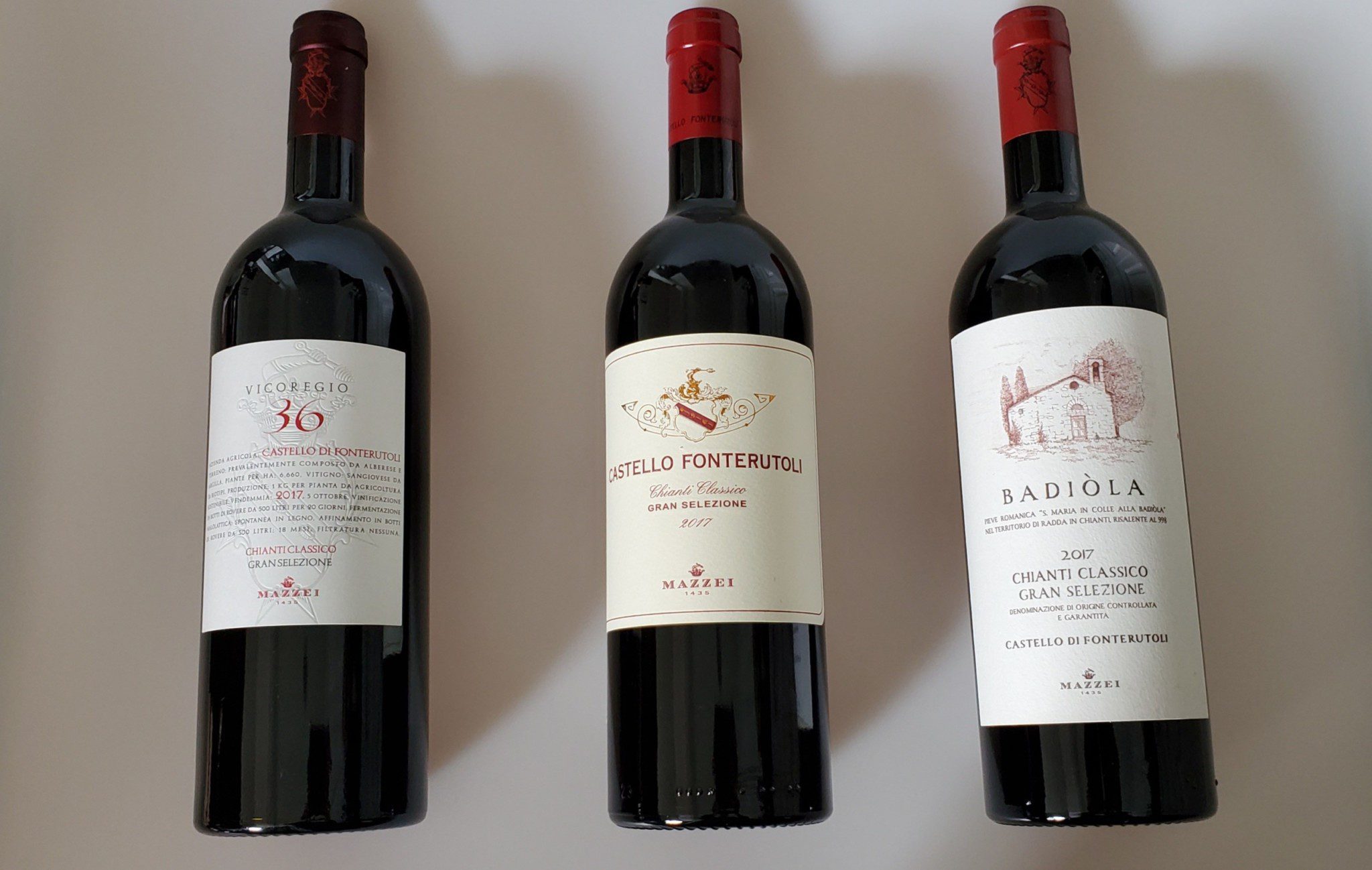 Castello di Fonterutoli Gran Selezione 2017 ($74)
The flagship wine from the Castello di Fonterutoli estate, this wine is made from a selection of eleven of the best vineyard plots surrounding the Fonterutoli hamlet in Castellina. The vineyard plots sit at altitudes of 420-510 meters above sea level and the soils are rocky limestone and chalk. The vines are between 25 and 30 years old. Each plot is vinified separately in stainless steel and then aged in French oak barrels for 18 months, followed by four months in concrete.

This wine was first produced in 1995 and colorino and malvasia were blended with sangiovese. But the 2017 vintage is the first vintage to make the wine 100% sangiovese. The wine has dark aromas of wild berries, black cherry, orange peel, lavender, and leather. On the palate, the wine is energetic and fresh with silky tannins.

Castello di Fonterutoli Vicoregio 36 Gran Selezione 2017 ($85)
This wine comes from a single vineyard, Vicoregio, located in Castelnuovo Berardenga. The wine is a blend of 36 different sangiovese biotypes, derived from 50 years of research, which are all planted in this single vineyard. The vineyard sits on a plateau 350 meters above sea level with sun exposure during the day and a wide diurnal temperature range at night. The soils are clay rich alberese (limestone) and fossil matter. Each clone is planted in a row and 36 individual vinifications take place in French oak barrels for 20 days with no pumping. The final blend is aged for 18 months in French oak barrel of which 50% are new, followed by four months in concrete tanks.

This wine was originally called Mix 36 and was an IGT wine. The 2017 vintage brought an upgraded status of Gran Selezione and a name change. The wine is intense with deep aromas of black cherries, dried flowers, blueberry, spice, and cola. The wine is broader and richer on the palate with velvety yet chewy tannins. Giovanni Mazzei expressed that “this wine is the heart beating from Vicoregio.”

Castello di Fonterutoli Badiòla Gran Selezione 2017 ($99)
This wine is sourced from the estate’s highest altitude vineyards that sit at 570 meters above sea level and overlook the 12th century Romanic church known as Badiòla in the Chianti municipality of Radda. These high elevation vineyards, exposed to sun and combined with a diurnal shift, lead to aromatic wines. The vines average 16 years of age and the soils consist of galestro (limestone) and sandstone. The grapes undergo natural fermentation in stainless steel and the wine is then aged for 16 months in French oak barrels followed by five months in concrete.

2017 is the first release of the Castello di Fonterutoli Badiòla Gran Selezione which has notes of ripe cherry, tea leaf, spice, and cola. The wine is complex but austere. The wine has an innate freshness and elegance with silky tannins.

These three Gran Selezione wines are all from Chianti Classico, but they are quite different wines, each with their own character and reflecting where they come from.

Originally from France, the popular Sauvignon Blanc grape is grown around the world in places such as New Zealand, Chile,…

Do you find that there is never enough space in your refrigerator, especially for those open bottles of wine?  I…

Do you find that there is never enough space in your refrigerator, especially for those open bottles of wine?  I…