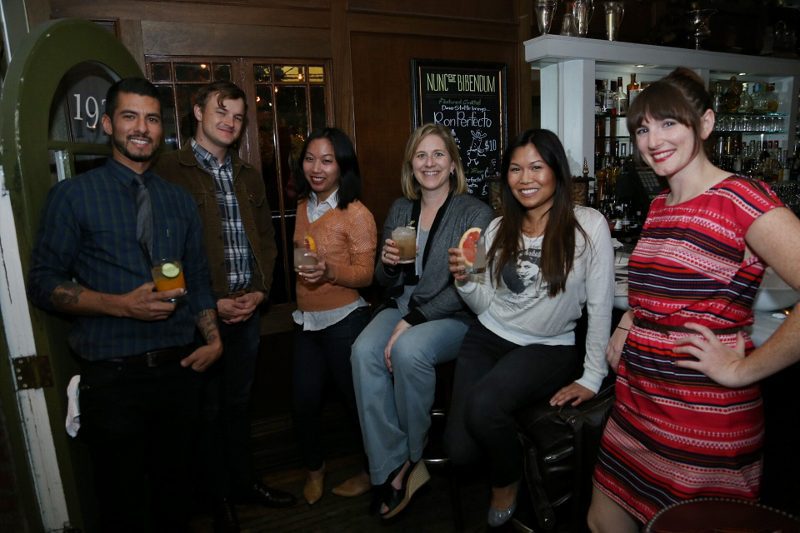 Posted at 10:55h in Cocktails by Allison Levine
0 Likes
Share

Spring is officially here and that means it’s time for the Spring cocktail menus to come out. With the sun shining, the birds chirping and the flowers blooming, Spring is about freshness and the new cocktail menu at Big Bar in Los Feliz is all about that! And, as with past menus, the cocktail program at Big Bar is a collaborative effort. It’s nice to see a diverse menu where each drink has a story behind it.

There are ten house cocktails on the menu – eight new drinks and two from the last menu (they are so popular they couldn’t take them off the list). We were invited in to taste through the new menu and tasted seven of the new drinks (we didn’t get to taste the Big Bar’s Own G&T because their house tonic wasn’t available but I will be back for that one.)

To start the night, Aaron Alvarez was behind the bar so we began with his drinks on the menu.

Aaron created the Best Friend Che (Singani 63, Gran Marnier, lemon cucumber), whose name has a double meaning. Singani 63 is a Bolivian grape brandy owned by director Steven Soderbergh who made the movie “Che”. And, Aaron has a friend named Che who passed away. So, the name is a perfect homage to both his friend and the movie. A seasonal drink, Best Fried Che is floral, fresh and light. This is the kind of drink that you can keep sipping as it goes down very easily.

Aaron also made the Pogue Mahone (Jameson Irish Whiskey, Cardamaro, sherry, lemon, orgeat) which is Irish slang meaning “Kiss My Arse.” Topped with Bunderberg ginger beer, this drink is fresh but has richer, earthier notes from the amaro and sherry.

Next up, Ryan Qualls got behind the bar to make us his drinks.

Into Her Arms (Absolut Elyx, strawberry shrub, lemon, jam) was originally a stirred drink made with gin but Ryan played around with it for a more seasonal option. This drink is very tart from the tasty strawberry shrub (made with strawberry puree and apple side) but not citrus-y. The garnish on this drink is a homemade strawberry thyme jam made especially for Big Bar by Brooksey Daisy (Brooke works at Big Bar but may just have a new business about to blossom because her jam would be great on toast in the morning). Portamento is a musical term when you slide from one note to another note but do not connect the two notes. Ryan’s Portamento (Reposado Tequila, Cocchi Americano, Montenegro, Java) is a stirred drink with rich aromatics but is smooth and light on the palate. It delicately glides down your throat and finishes with a coffee note. Ryan’s third drink is The Redeemer (cachaca, St. Germain, lime, raspberries). As cachaca comes from Brazil, Ryan was inspired by the statue of Christ the Redeemer in Sao Paulo. The St. Germain is well-balanced in this drink, resulting in a super tart cocktail, as opposed to sweet. In fact, the combination of cachaca and St. Germain makes a cinnamon note that pops through. Next up was Florence Hartigan whose one drink on this menu is also one of the most memorable.

Romper Stomper (Rye Whiskey, Grand Poppy, lime banana), named after the Australian film with Russell Crowe, might imply a big, aggressive drink. But, it is super light and bright and I think anyone would be hard pressed to think it was made with a brown spirit. Flo’s combination of fresh muddled banana with the rye whiskey brings out sweeter, more tropical notes, almost like a rum.

To finish the night, we had a drink that was created by Paul Sanguinetti for a recent event at Big Bar but it was such a hit that they added it to the menu. The ingredients in the Mixed Blessings (Encanto Pisco, Tequila, white honey, Giffard creme de pampelmousse rose, lime) are very important. They get the white honey from the Hollywood Farmer’s Market and there is a touch of fleur de sal added to the drink that comes through ever so slightly on the finish.

The new Big Bar cocktail menu will be available through the Spring and Summer so there is plenty of time to head there….again and again! And, don’t forget that Big Bar is located inside The Alcove, a charming bakery and restaurant. So head in for cocktails and stay for food.

Outdoor Dining in the Desert at HooDoo Palm Springs

If you like the heat, Palm Springs is the perfect weekend getaway. The day may be spent by the pool,…

Between Mike Skinner's obsession with his family's history and a series of coincidental events, Mike and Carey Skinner are the owners…