29 May Yes, they make wine in Tunisia

From what I understand, this is the first time that Tunisian wine is available in the U.S., thanks to Kathy Bailey who has started to import them through her company Travis Wine Imports.

I was intrigued when Kathy contacted me a few months ago about putting together a small trade and media lunch with the wines. I was all the more impressed after I tried them and think that it is an interesting story to share. 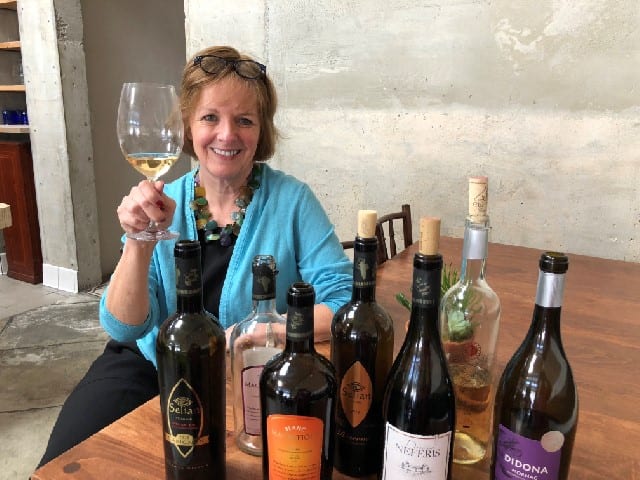 Tunisia is located on the northern coast of Africa. Wine has been made in Tunisia for more than 2,000 years. In fact, Tunisia is home to the world’s first documented viticulturist, Mago (or Magon), who was an agronomist, viticulturist and writer in Ancient Carthage (200 BC). Mago wrote the first known guide to growing and cultivating vines and making wines.

While the roots of viticulture run deep in Tunisia, its modern history was limited by the 1,800 years of Muslim rule since about 661 AD. Limits were put on winemaking, but it was never completely wiped out.

When the French invaded Tunisia in 1881, wine production increased. However, when the French left in 1956, they dropped their imports of Tunisian wine and the French experts returned to France, leaving a void in knowledge and a glut of wine.

The next 50 years were tumultuous, with dictatorships, revolutions and regime changes. However, since the late 1990s, Tunisia’s modern-day wine industry has been recovering its wine heritage and there are a few brave individuals who have invested in modern wineries and businesses.

Kathy started traveling to Tunisian in 2012 after the revolution known in the west as the Arab Spring. During her travels, she was introduced to the wines of Tunisia and was amazed to learn that even the best wines were not available in the U.S.

In an example of how cultural myths can spread, when she asked winemakers why they didn’t export to the U.S., they uniformly reported that they had been told Americans won’t pay more than $8 for a bottle of wine. As this is not true, Kathy decided to start importing the wines.

Tunisia has more than 31,000 hectares of vineyards planted, the majority of which is in Cap Bon. More than 65 percent of Tunisia’s wine production is rosé wines, with just 25 percent red wine and less than 10 percent white wine. The most popular varieties grown are: Carignan, Mourvèdre, Cinsault, Grenache, Syrah, Merlot, Muscat of Alexandria, Chardonnay and Pedro Ximenez.

The two producers now available in the U.S. through Travis Wine Imports are Ceptunes and Domaine Neferis. While the wines do cost more than $8, they are still very good values, averaging $14-$20 per bottle, except for one that is over $40.

-Family-owned winery Cetpunes is located in the AOC Mornag and the limestone and clay soil vineyards are located near the Mediterranean.

—Ceptunes Jour Et Nuit Muscat 2016, Mornag AOC—Made from Muscat of Alexandria, the wine is aromatic but dry and delicate on the palate.

—Ceptunes Didona 2012, Mornag AOC – A blend of Cabernet Sauvignon and Syrah, the wine has aromas of black fruit, leather and cedar notes.

—Domaine Neferis is located in the AOC Sidi Salem, approximately 30 kilometers from the Mediterranean coast. The estate owned winery believes in minimal intervention in vinification and uses no herbicides or pesticides and low sulfur.

—Domaine Neferis Rose Magnifique 2016, Sidi Salem AOC—A blend of Syrah and Grenache, the dry rose has aromas of red berries and peaches and beautiful minerality on the palate.

—Domaine Neferis Selian Rouge 2015, Sidi Salem AOC—Made from 100 percent Carignan, the wine spends eight to 12 months in oak. It has notes of black currant, violets and spice and on the palate is medium-bodied with silky tannins.

—Domaine Neferis Selian Rouge Reserve 2013, Sidi Salem AOC – The reserve 100 percent Carignan wine spends 18 months in oak. Like the Rouge 2015, it has notes of black currant and spice but on the palate, the wine has more structure and a bit more intensity.

—Domaine Neferis 2009, Sidi Salem AOC – A blend of Carignan and Syrah, the wine has aromas of cherry, plum and spice. It is a medium-bodied wine with soft tannins. This is the one wine that is priced around $40.

This story originally appeared in the Napa Valley Register. Saying that Chilean wine equals value wine is “like sticking fingers…