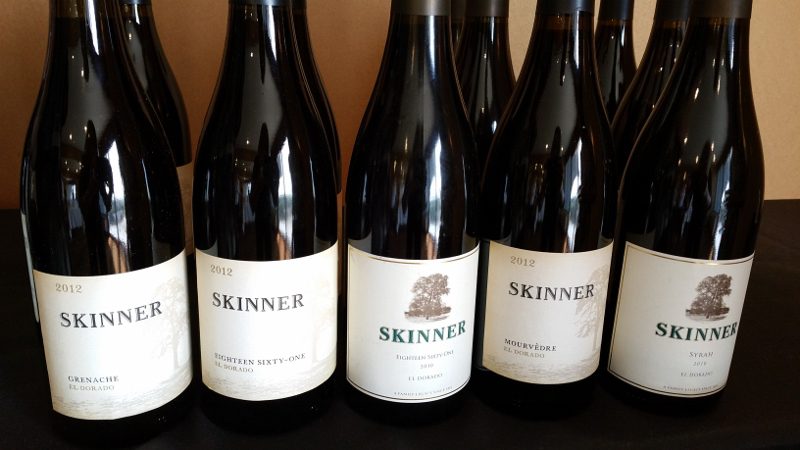 Between Mike Skinner’s obsession with his family’s history and a series of coincidental events, Mike and Carey Skinner are the owners of Skinner Vineyards in El Dorado in the Sierra Foothills. Carey joined us in Los Angeles to share the story of her winery. Mike had a dream about a vineyard but it was just a dream. Then, one day their son Kevin and his wife were driving from Lake Tahoe using an old map and found “Skinner” on the map near the Sierra Foothills town of Placerville. Upon further discovery, Mike found that he is the great-great-great-grandson of James Skinner, a Scottish miner who in 1861 established one of the Sierra Foothills’ first wineries. After discovering gold in Coloma in 1861, James had the largest winery in the country, producing 15 thousand gallons of wine and whiskey per year.

Determined to reclaim this family legacy, and to make his dream a reality, the Skinners flew up to the Sierra Foothills to buy 5 acres of the original land. However, the original land had been donated to the fire department and for schools. Instead, in 2006, they purchased 25 acres with a house, just 1 mile from the original family land and planted vineyards. In 2007, they purchased an additional vineyard with 67 acres planted.

With volcanic and granite soils and high elevation vineyards, Skinner Winery is focused on Rhone varietals: Viognier, Rousanne, Grenache Blanc, and Picpoul (for white wines) and Grenache, Syrah and Mourvedre (for red wine). In addition to the Rhone varietals, they also made a commitment to honor heirloom varietals. They decided to produce whatever James Skinner produced which means that they also planted varietals like Trousseau, Petite Bouschet, Mission and Zinfandel.

Their first harvest was in 2010 and today Skinner Vineyards produces 18 different labels, for a total of 4000 cases of wine. They hand pick the grapes in small lots and make their wine in their sustainable 12,000 square-foot solar powered winery.

Skinner 2011 and 2013 Seven Generations is a white Rhone blend made with Rousanne, Marsanne, Viognier, Grenache Blanc, and Picpoul (the percentages vary from year to year). The 2013 has 38% Grenache Blanc, resulting in a wine with higher acidity than the 2011. The wine spends 11months in neutral french oak sue lies and is unfined and unfiltered. Skinner 2012 Mourvedre El Dorado is aged in neutral French oak for 11 months and is unfined and unfiltered. This elegant wine is made with grapes from 5 vineyards, each with different soil types and elevations and only 188 cases are produced.

Skinner Vineyard wines range between $18-36 bottle. By combining their family history and the potential of the Sierra Foothills, Skinner Vineyard is a winery to be on the lookout for.

Chi Spacca is over one year old now but I finally made it....barely! I knew it was near Mozza but managed…