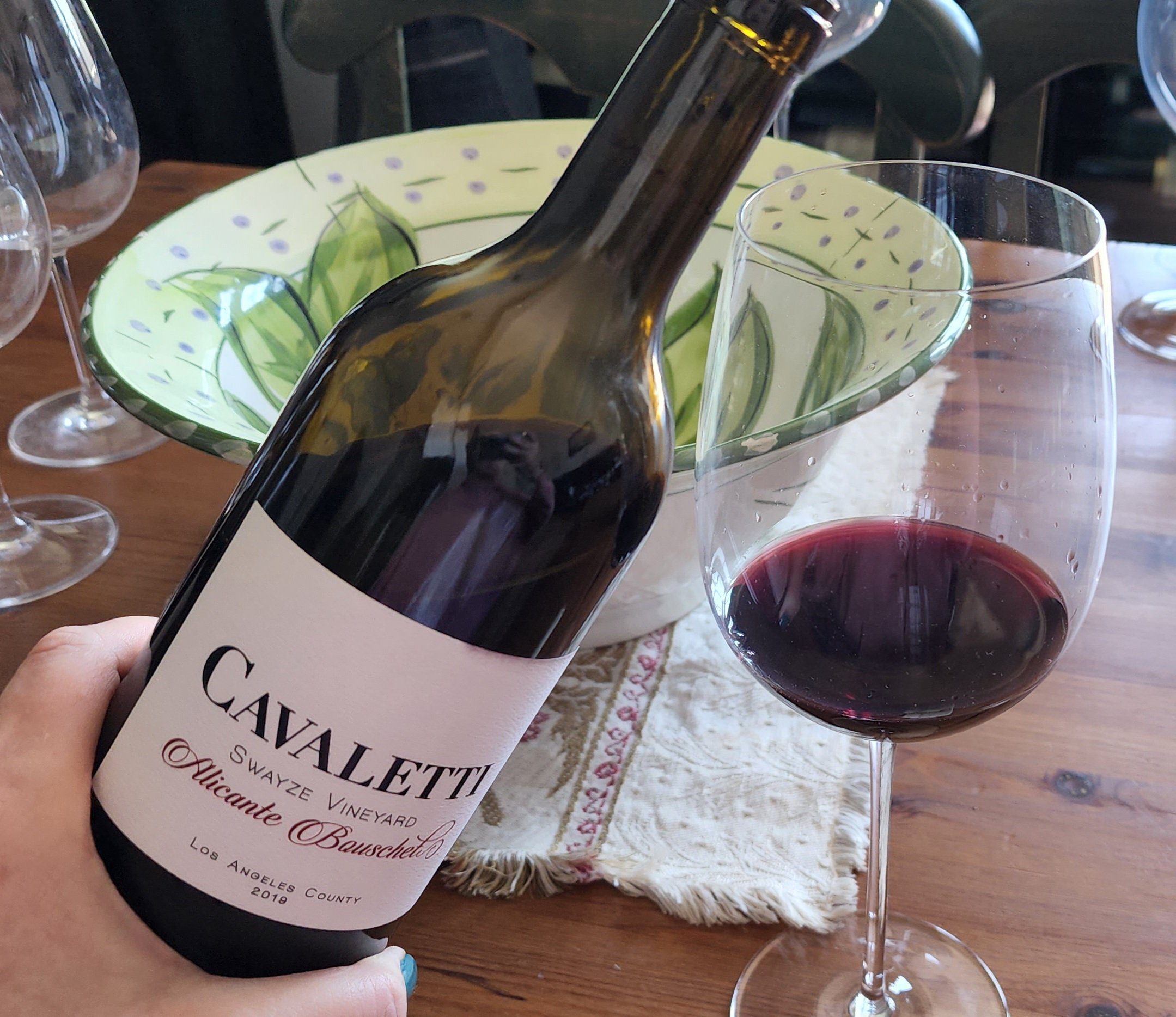 Alicante Bouschet is a big and bold wine. But despite its intense color and big aromatics, it is a high acid wine. This is what was such a pleasant and unexpected surprise as I drank the Cavaletti 2019 Alicante Bouschet from the Swayze Vineyard in Los Angeles County and that is why it is the Please The Palate wine of the week. 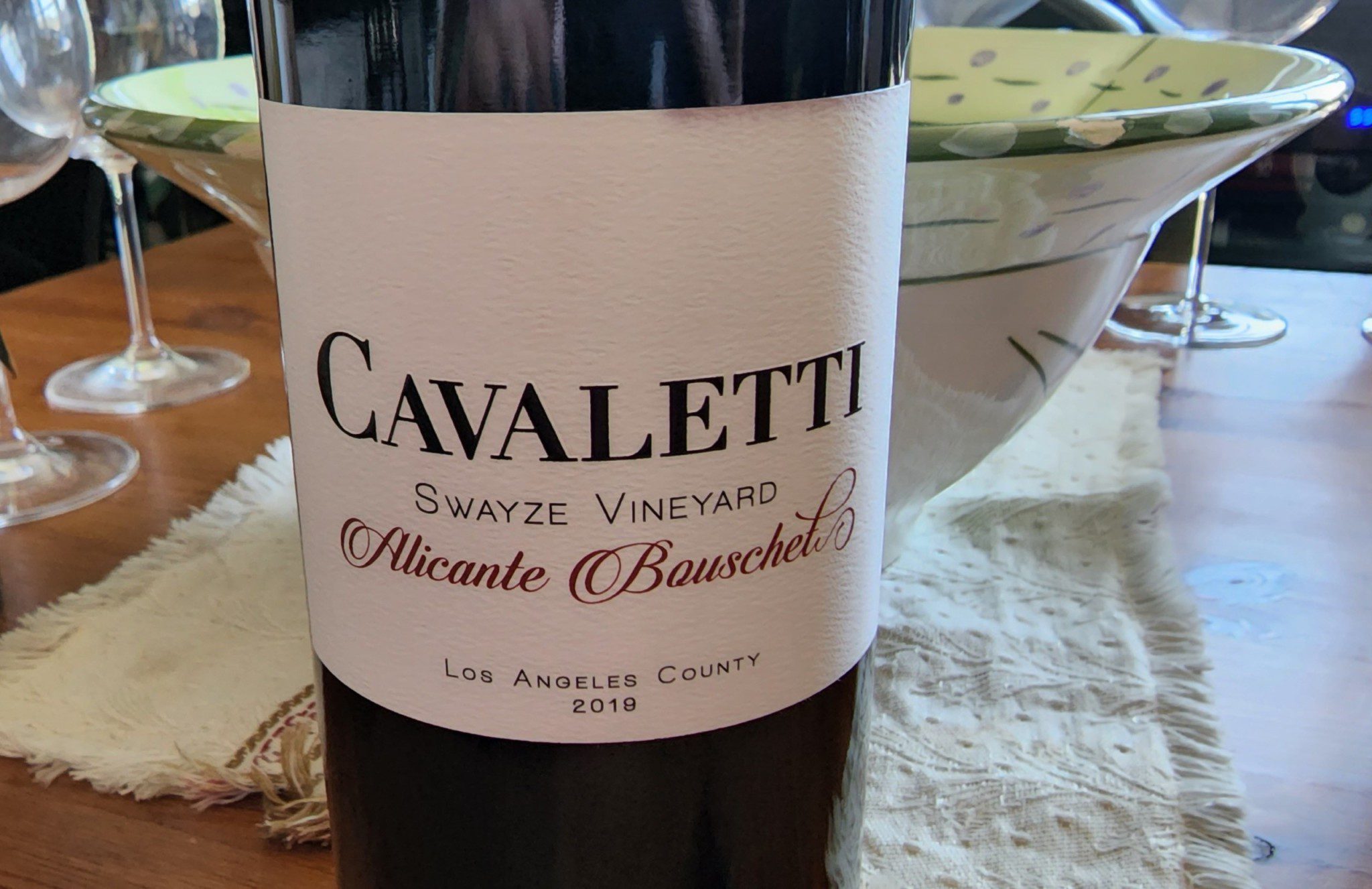 A crossing of Petit Bouschet and Grenache, Alicante Bouschet was created by viticulturalist Henri Bouschet in 1866 and is a teinturier grape, which means its juice is red. Originally it was designed as a blending grape to improve the depth of color of other popular grapes. In the 19th century, it became popular thanks to its deep color and generous yields. Due to its high yields and its easiness in growing, Alicante Bouschet was used to help rebuild the European wine industry following the phylloxera epidemic. While it was grown in California during Prohibition in the early 20th century and sold as table grapes, Alicante Bouschet lost its popularity in the late 20th century. Today it is grown in Spain, Portugal, and France, and there are less than 900 acres planted in California, according to the California Grape Acreage Report.

A few of those acres are found in the Swayze Vineyard, located in the high dessert in the Antelope Valley in Los Angeles County. Days are hot, nights are cool, and the sun shines year round. And the 10-acre Swayze Vineyard sits at an elevation of 3000 feet. This is where Patrick Kelley of Cavaletti Vineyard sources his Alicante Bouschet. 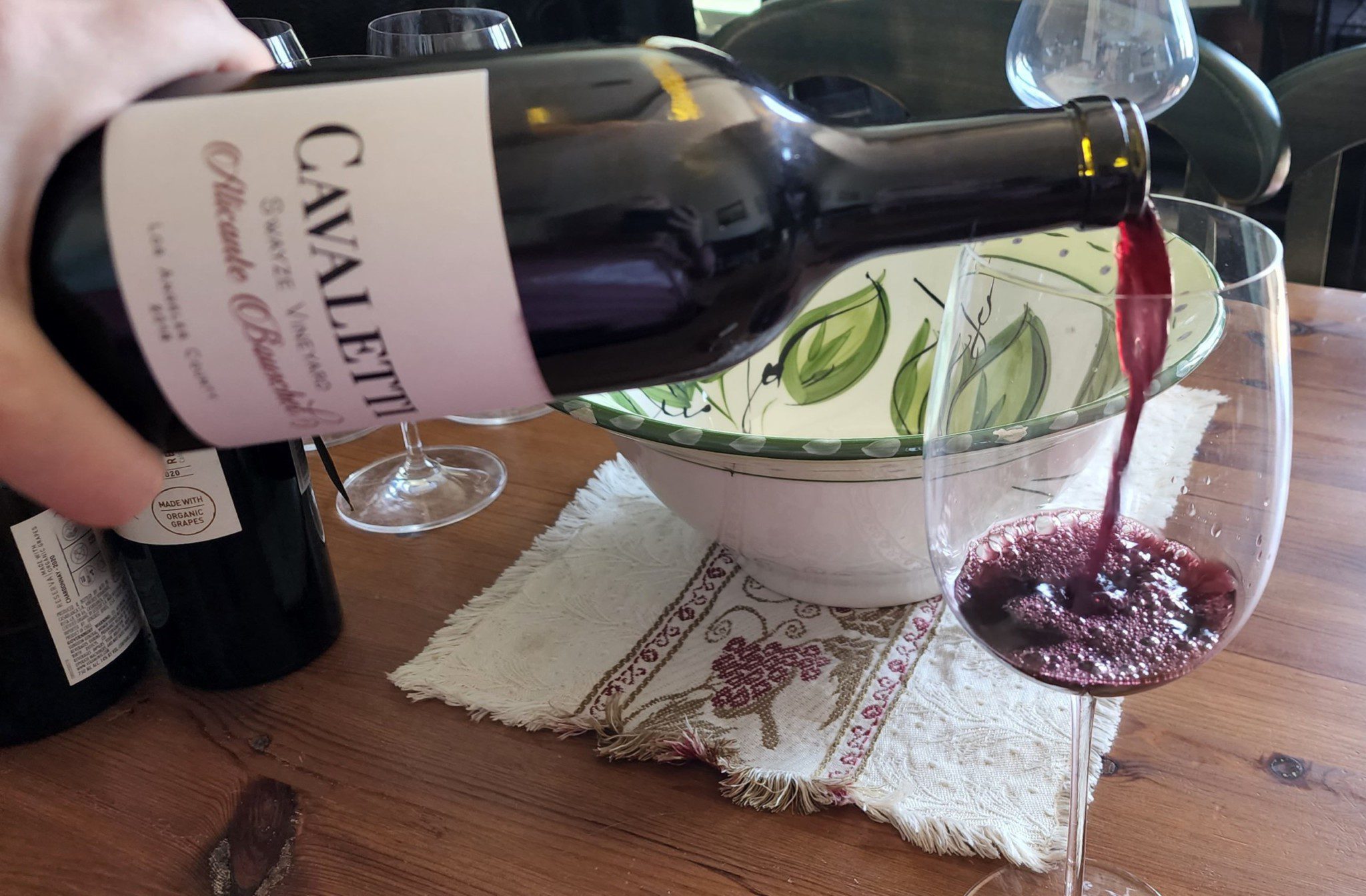 Intrigued by the history of wine in Los Angeles, Patrick Kelley founded Cavaletti Vineyards in 2016. At Cavaletti, Patrick focuses on vineyards located within 109 miles of his home in the Santa Rosa Valley in Ventura County. While scouting vineyards, Patrick found the Swayze Vineyard and began purchasing Tempranillo, Grenache, and Zinfandel. He would walk by the block of Alicante Bouschet grapes but had heard Alicante Bouschet was not very good and so he overlooked the block. After a few years, Monty Swayze offered Patrick Alicante Bouschet and he said he would try it. He agreed to take 1000 pounds of grapes but would make it in his garage and it would not be commercial.

Four days later, Patrick was amazed at the aromatics of the wine. He finished fermentation and found the finished wine was gorgeous. So Patrick bottled the wine and has since made a single bottling of Alicante Bouschet.

The Cavaletti 2019 Alicante Bouschet is rather deceiving. On the nose, the wine has big, dark notes of blackberries, blueberries, and violets. But on the palate, the wine is fresh with lots of acidity and lovely fruit tannins. The wine finishes with a juiciness that hits the back of the palate and with notes of sour cherry. The Cavaletti 2019 Alicante Bouschet, Swayze Vineyard, Los Angeles County retails for $35.

Falanghina, with its fresh floral, stone fruit, and almost notes, and Aglianico with its beautiful fruit and floral aromas and…

Falanghina, with its fresh floral, stone fruit, and almost notes, and Aglianico with its beautiful fruit and floral aromas and…