26 Jul Epokale Gewürztraminer: Aged in a silver mine in Alto Adige

When aging wine, it is important to keep it at a constant temperature. Sitting at more than 7000 feet in elevation inside an old silver mine offers a consistently cool temperature. It is inside this old silver mine that we traveled almost three miles inside to see the bottles of Cantina Tramin Epokale Gewürztraminer aging. Cantina Tramin started aging their Epokale Gewürztraminer in the old silver mine in 2009 and we also enjoyed a vertical tasting of six vintages as I wrote about in the Napa Valley Register and share here.

TERMENO SULLA STRADA DEL VINO, Italy — Val Ridanna in the province of Bolzano in South Tyrol (Alto Adige) in northern Italy is home to one of the highest silver mines in Europe, sitting 2,700 meters (8,858 feet) above sea level.

The mining tradition at Monteneve Ridanna existed for more than 800 years and sustained the oldest productive mine in the Alps. From the 12th century until the 1980s, more than 1,000 miners worked in this silver mine.

Today, tucked four kilometers (2.6 miles) inside the mine and 450 meters (1,500 feet) from the top of the mountain is the location where the Epokale Gewürztraminer from Cantina Tramin is aging.

Gewürztraminer thrives best in cooler climates. In Tramin, the vines are at medium-high elevations and benefit from the diurnal shift between hot days and cool nights. Due to the proximity of the Alps, as well as Lake Garda, Tramin gets local mountain breezes that mix with the warm Ora wind from the lake. And the clay and limestone soils, which do not retain heat, contribute to Gewürztraminer’s aroma and body.

Cantina Tramin Epokale Gewürztraminer is not a typical Italian wine. It is a new style of wine inspired by an old tradition in which residual sugar gives the wine body and structure and can help with aging the wine.

The grapes are sourced from two of their oldest Gewürztraminer vineyards, harvested by hand into small bins and gently pressed. Fermentation takes place slowly for more than four weeks, and then the wine is placed into small stainless-steel tanks. The wine spends eight months on the lees, with bâtonnage for the first few months.

The wine is then bottled and carried into the Ridanna Monteneve mine, where it is left to age at a consistently cool temperature of 11 degrees Celsius (52 degrees Fahrenheit), with 90% humidity. 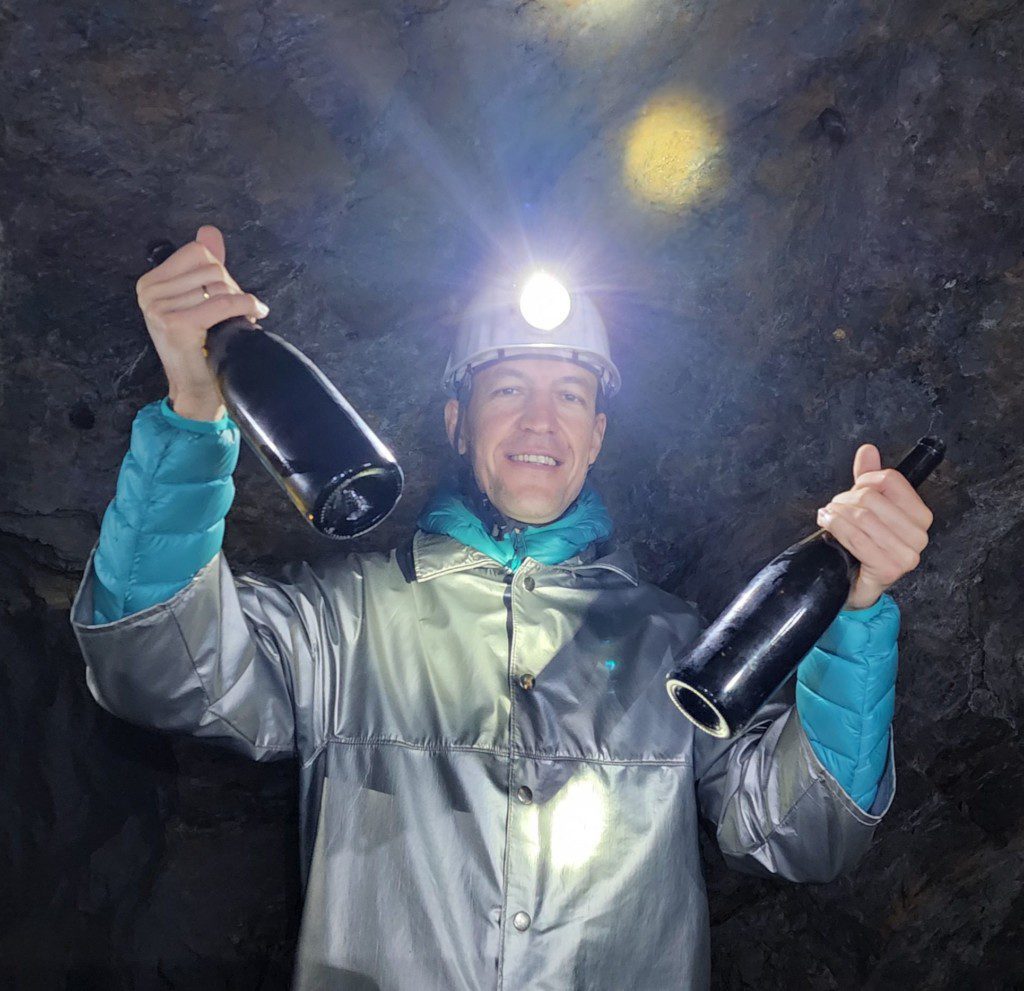 Visiting Cantina Tramin, I had the honor of sitting down for the first vertical tasting of Epokale, covering six vintages. We started with the first vintage ever made, the 2009, which in 2018 became the first Italian white wine to be awarded 100 points by Robert Parker’s Wine Advocate.

For the 2009 vintage, the grapes were picked ripe and concentrated. The 2009 was placed in the mine for seven years. The richness of the 2009 Epokale, which has 107 grams per liter of sugar, can be smelled. The wine is powerful, structured and intense with aromas of peach and rose. On the palate, the wine is lively and concentrated with a long finish of honey and spice notes.

After 2009, the team at Cantina Tramin produced Epokale with less residual sugar. In 2010, a cooler year, the grapes matured later than in 2009 and were less concentrated. The finished wine, which spent five years in the mine, has only has 30 grams per liter of sugar. With aromas of tropical fruits, candied pineapple, lemon, and white flowers, it is fresh and elegant on the palate with more salinity on the finish.

Beginning in 2013, Epokale was aged for six years in the mine, and that is now the total aging time for future vintages. In addition, the Cantina Tramin team stopped thinking about sugar levels of the grapes and instead looked for balance. As a result, the residual sugar levels also began to increase a bit.

Tasting six vintages of Epokale was an enlightening look at Gewürztraminer, a grape notorious for high sugar levels and low acidity. But in the Epokale wines, the Gewürztraminer has fresh acidity that has been maintained.

This week, my friends Christine, Cindy, and I celebrated our two year anniversary of the video series we host called…

What Wines We Are Crushing On Today?! - Crush On This Episode 106

In the very first episode of Crush On This, Allison, Cindy, and Christine shared the first wines they had a…