24 May Driving into the Santa Cruz Mountains

Sitting above the fog line, the Santa Cruz Mountains AVA is a diverse region made up of numerous microclimates. This diversity allows for a diversity of grape varieties, from Chardonnay and Pinot Noir to Cabernet Sauvignon as I wrote about in the Napa Valley Register and share here. 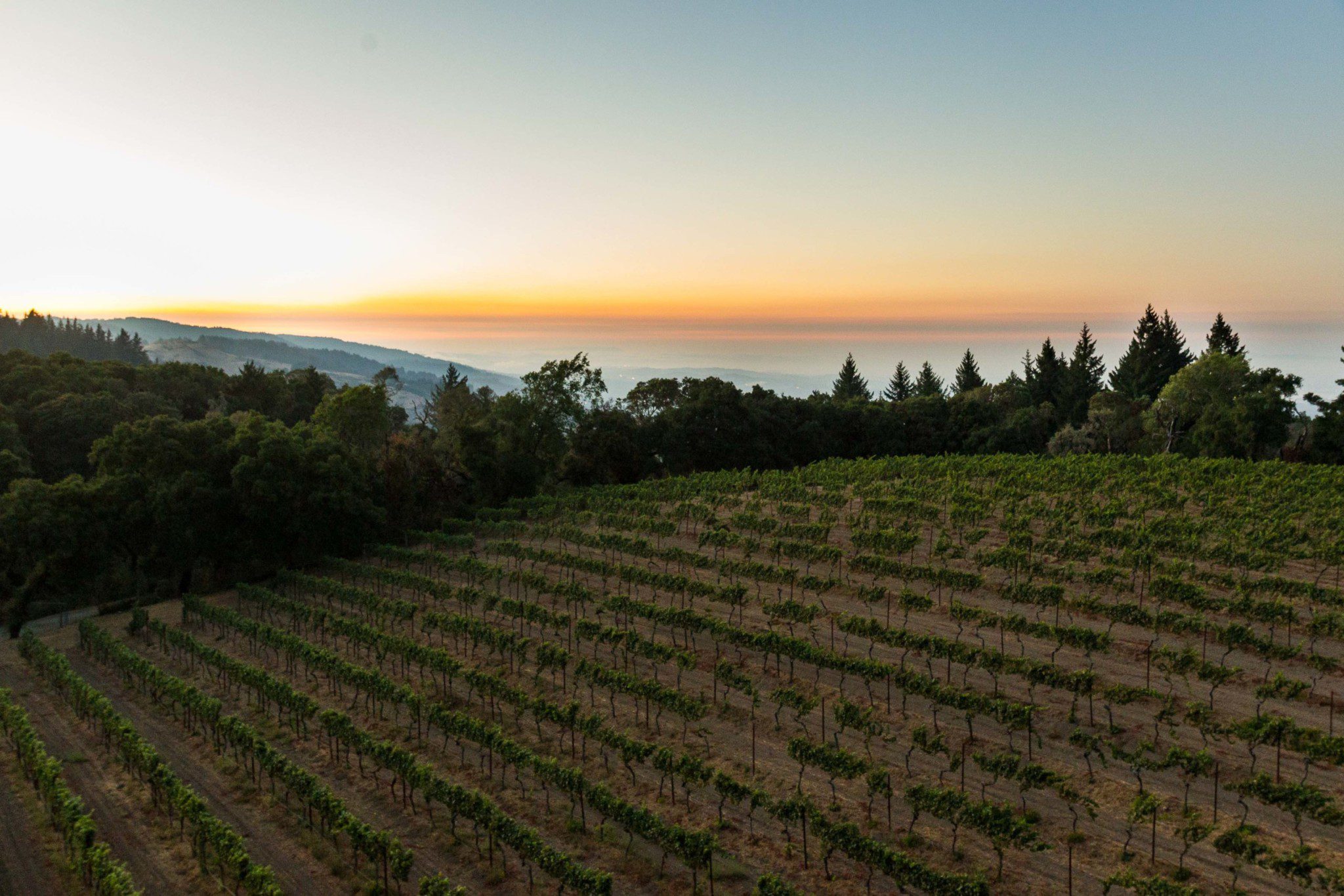 Located north of Monterey, the Santa Cruz Mountains AVA is a pear-shaped appellation forced out of the San Andreas fault. Spanning the California coastline from Half Moon Bay down to Santa Cruz, the region is surrounded by the deep-water canyon of Monterey Bay to the west, the hot Santa Clara Valley to the east, and the cool San Francisco Bay to the north. With these influences, the Santa Cruz Mountains is a cool climate region with pleasant summers. 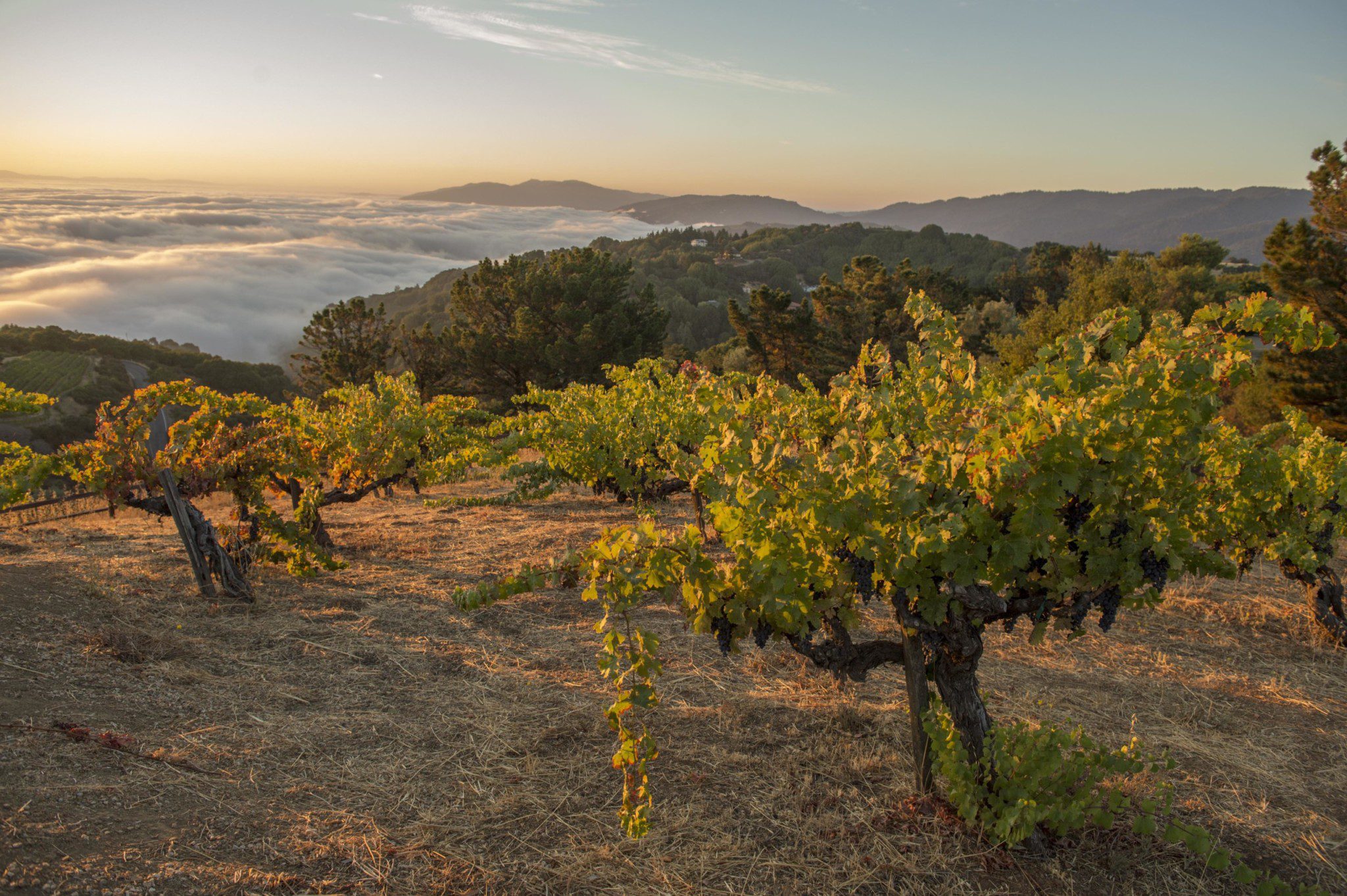 Winemaker Jeffrey Patterson of Mount Eden Vineyards said the Santa Cruz Mountains AVA is “based on elevation, not soils and not boundaries. The wines are typically lower in alcohol and age extremely well. They have structure, moderate ripeness, and balance.”

The vineyards are surrounded by forests. Jeffrey described them as “little islands in this vast mountain range.”

A region lacking corporate ownership, its small-production wineries offer a diverse array of wines and styles.

Chardonnay
In the Santa Cruz Mountains, Chardonnay challenges existing perceptions of body, texture and alcohol. The winemakers pick the grapes when ripe, but the alcohol remains low and the wines still have body.

Robert Bergstrom launched Sandar & Hem in 2018. “You can taste the translucence of the region,” he explained. With a doctorate in biochemistry, Bergstrom got his certificate from UC Davis and dove in deep. He named the winery after the Sandar region in Norway where his ancestors’ surname “Hem” is prominent.

The Bruzzone Vineyard in Scott’s Valley is four miles from the ocean with an early fog that burns off late in the morning. The wine is a pale-yellow color and has notes of citrus fruit and stony minerality. The wine is delicate but structured with shimmering acidity, and there is a soft touch of nuttiness on the finish.

Thomas Fogarty planted 30 acres on a 360-acre property in 1978/79 and established the winery in 1981 when it seemed like a hairbrained idea to get into agriculture and make wine. But by 1981, they had 15 acres of Chardonnay planted 10 miles from the ocean. Thomas Fogarty Jr. now oversees the winery.

Langley Hill is a single vineyard that benefits from the proximity to the ocean, a diurnal shift, and elevation. The wine has an intense nose with ripe notes of stone fruit and citrus, vibrant acidity and texture that lingers.

Mount Eden Vineyards, started in the 1940s by Martin Rey, became Mount Eden in 1972 and is possibly home to the oldest Chardonnay vineyard in the regions. Winemaker Jeffrey Patterson says, “What I want is for Mount Eden Chardonnay to still be fresh after 20-25 years.” He achieve this because of what he describes as the magic of the vineyard site: the shale soils, high elevations, no irrigation, low yields, small berries, and old vines. “Longevity is the game for me. It is the mark of greatness.”

The 2018 Chardonnay is a bright yellow-gold color with a ripe nose of lemon curd, apple, soft spices and a nutty touch. 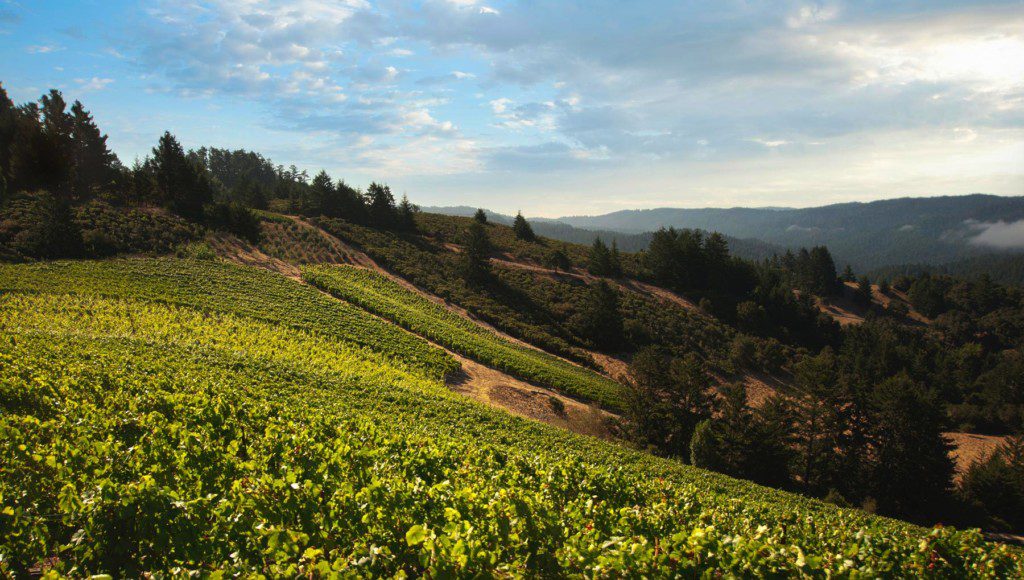 Pinot Noir
The Pinot Noir vineyards of the Santa Cruz Mountains are influenced by redwood forests, fog, uplifted sea floor and complex soil maps. The wines have good acidity, freshness and tension but due to the multiple microclimates, each Pinot Noir is different.

On the ocean ridge, it is so cold that grapes develop thicker skins, resulting in l acid-driven, low-alcohol, dark, almost brooding wines. Further south around Corralitos, the climate is maritime, resulting in grapes with thinner skins, and lighter colored wines that still have depth and intensity of flavor.

David and Stacey Gollnick bought their 10-acre property in 2008 and in 2009 planted nine acres to Pinot Noir and one acre to Chardonnay. Located on the west side of the San Andreas fault, the vineyard sits at 700-1000-foot elevation eight miles from the Pacific Ocean. The 2017 Pinot Noir has a pretty nose of red fruit and spice. It smells like the forest in the fall. On the palate, the wine is savory with grippy tannins.

Mount Eden winemaker Jeffrey Patterson says Pinot Noir is hard to grow but it’s a dream to work with in the cellar. “The complexity we seek is an illusive target.” For this wine, there is no yeast, no water, and no tartaric acid added. Also, there is no filtering or fining. The wine has perfumed herbal notes and spice.

Winemaker Jeff Brinkman started making wine in the 1990s and farms organically working with heritage and suitcase clones. The only variants in his winemaking are the choice of whole cluster and oak protocols. The result are wines that are true expressions of place. The Horseshoe Vineyard sits at 1,600 feet in elevation and the resulting wine, which was partially whole cluster, is savory but floral with notes of red fruit, dried flowers and earth.

After a career owning a bakery, Richard and Mary Kay Alfaro acquired a 75-acre apple farm in one of the southernmost parts of Santa Cruz, three miles from the ocean. They replanted with vines and today Alfaro Family Vineyards has 56 acres under vine. This wine is sourced from 14 acres planted in 1999. There are 10 different clones planted in sandy loam and gravel soils. The wine has notes of tart cherry, kirsch, spice, pressed roses, and violets with a nice balance of acid and tannins.

After teaching himself to brew beer in his 20s, owner and winemaker John Beneditti turned to winemaking in his 30s and has focused on Santa Cruz from the start. He calls Chrysanthemum Pinot Noir his geekiest wine; it pays homage to a Japanese family who grew chrysanthemums for 50 years where he now makes wine.

This wine is his most labor-intensive. Made from four single vineyard bottlings it sees extended sur lie aging for 18 months total, with additional lees added from other Pinot fermentations. The lees break down in the barrel, lending a creamy back note to the wine. The result is a wine that has soft tannins, notes of tea and flowers and a lovely texture.

Founder, vineyard manager, and winemaker Bradley Brown planted his first vines in 2000. He planted Syrah but after falling in love with Santa Cruz Pinot Noir, he pulled out the Syrah and replanted. Today he has 10 acres of certified organic estate vineyards on a terraced hillside. The Pinot Noir is 100% whole cluster, foot treaded, and fermented with native yeast. 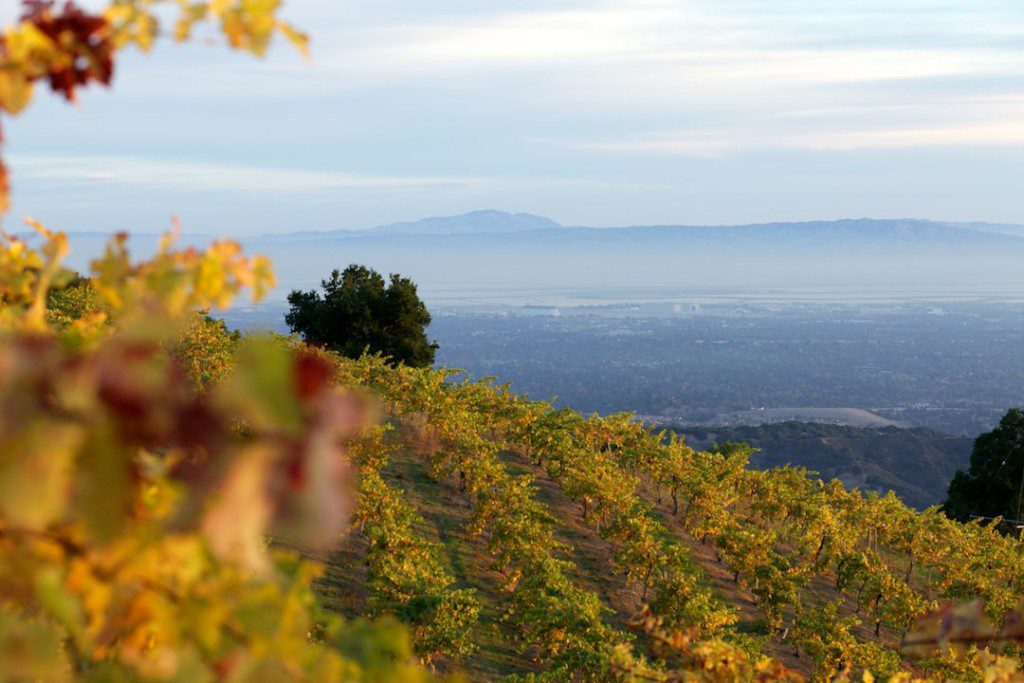 Ted Glennon came to Monterey to open the restaurant 1883. Today he focuses on the macro region, influenced by the Monterey Bay and the San Andreas fault line. Bates Ranch, in the southeastern extreme of the Santa Cruz Mountains, is planted to 65-year-old own-rooted, dry-farmed vines. The wine has black and red fruit notes and is lush on the palate with beautiful acidity.

Lexington Wine Co is another label from Thomas Fogarty. The Gist Ranch vineyard is the home of Lexington wines, which is located on the Pacific Plate in Santa Cruz County at an elevation of 2,400 feet. The Fogarty family planted grapes in 2000 and released their first wine in 2011. Planted above the fog line, there are no issues in ripening the Cabernet Sauvignon because although it gets cool at night, it is much warmer than one might expect. The wine has lavender and boysenberry notes and is smooth on the palate.

The Ridge Vineyards Estate sits at 1,800-2,600 feet. The wines from the top of the mountain are more austere; they get rounder and fattier as you go down the mountain. The Estate Cabernet comes from vineyards at a lower elevation. It has aromas of chocolate, and fresh and dried herbs. it has a meaty nose and sandy, slightly gripping tannins.

On the Thursday before Memorial Day in the United States, we celebrate International Chardonnay Day. This wonderfully neutral grape expresses…

Studying wine, especially Italian wine, can be challenging. Puzzles, which require an eye for detail, as well as patience, are…